The Showdown: World’s Most Expensive Car vs World’s Cheapest Car 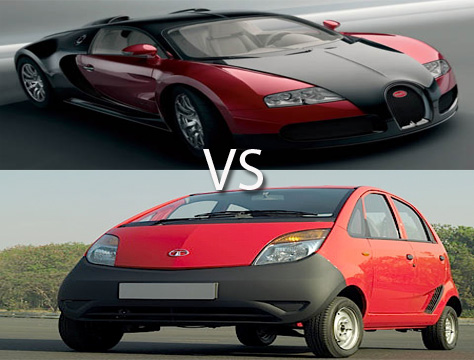 Where do you start with a comparison like this and, really, what is the point? Well, every now and then it’s important to take a look at the extremes of an issue just to get some perspective or maybe just because it’s Tuesday. We traditionally cover cars that are expensive, exclusive and ridiculously fast. So, why take pause now? Because the new Tata Nano is a game changer, just like the Bugatti Veryon 16.4 Coupe, but for very different reasons. Let’s take a look at both the world’s cheapest car and the world’s most expensive car and see what you get for you dollars or lakhs.

The Tata Nano comfortably seats four adults in a package that has the smallest exterior footprint but is 21% more spacious than the smallest car available on the market. There are 3 trim levels available. The Tata Nano Standard comes in three colors with single tone seats (as opposed to ultra high-end two-tone) and a fold-down rear seat. The Tata Nano CX gets 5 color options with heat and AC, two-tone seats (bam!), a parcel shelf, booster-assisted brakes (aka power-assisted) and a fold-down rear seat with nap rest. The super pimp Tata Nano LC comes with fabric seats, central locking, power windows up front, fog lamps, trip meter, cup holders, a mobile charger and rear spoiler (to make sure there is enough downforce when the 33 hp engine is floored.)

Advantage: Bugatti — but the nap rest keeps it close

The Tata Nano in addition to being the cheapest, may also be the slowest. The car gets only 33 horsepower from it’s 623cc two-cylinder engine with four-speed gearbox. However, as reported, the car can reach Indian highway speeds which is actually pretty darn cool.

The Bugatti Veyron has a ridiculous 1001 horsepower 8.0-liter quad turbocharged W16 engine with 922 pound-feet of torque. Basically, two svelt V8 block engines are mounted in a W configuration to create the most powerful stock engine in a consumer car. Top speed is rated at 253 mph, making it the second fastest car next to the SSC Ultimate Aero, which tops out at 257+ mph. Just in case you are tempted to test the spec sheet on your local expressway, Bugatti wants you to take a minute and consider the sanity of this endeavor. Top speed can only be obtained by using a separate key which, unless activated, curtails your efforts down to 233 mph just to be on the safe side. O to 60 mph takes less than 3 seconds.

Advantage: Bugatti — but only by 968 horsepower

The Tata Nano meets all safety requirements. It even passes tests related to roll-overs and offset impacts which are not regulated in India. The passenger compartment is reinforced and there are crumple zones, intrusion-resistant doors, mandatory seatbelts and an all-sheet metal body. It even sports tubeless tires with staggered wheels to give it more stability.

The Bugatti Veyron has front airbags as mandated by the US government but wins no safety awards with its lack of side or side curtain airbags. You do get stability and traction control to actually make you look like you know how to drive this thing.

Advantage: Nano — by a long shot

The Tata Nano will also be in short supply. Tata has instituted a special process for reserving the Nano starting on April 9th, 2009. Buyers must either be able to pay the entire cost or request financing via 15 banks that Tata has partnered with for the booking process. A computerized random selection process will choose the first 100,000 allotments for deliveries to start in July 2009. Subsequent phases will offer additional cars as production increases.

Well, we have taken a stab at a quick comparison between the two and have come to a tie – 2 to 2. Traditionally, a tie breaker is needed but in this case I believe that keeping things on even keel is appropriate. The world’s most expensive car, the Bugatti Veyron 16.4, and the world’s cheapest car, the Tata Nano, both have their pluses and minuses. But let me leave you with one parting thought. For the base price of a Bugatti Veyron at $1.5 million you could purchase 750 Tato Nanos at $2,000 a pop. And because the point of the Nano is to offer an affordable option for Indian families who are often forced to use two-wheelers for transportation, Tata is making possible an incredible alternative. And I say Bravo!