The art of covering car exteriors has come a long way since the automobile’s infancy. Hand-brushing has given way to electrostatic-charge-assisted spraying, and highly-toxic, oil-based lacquers have given way to less-dangerous and richer-looking (but hardly correct-appearing when applied to old cars) basecoat-clearcoat finishes. But nowadays you don’t even need any paint to clothe your ride.

Advancements in chemistry, manufacturing techniques and printing technology over the last couple decades have made vinyl wraps for vehicles more practical and accessible than ever. Unfortunately, this also means that for every vinyl wrap that turns out brilliantly, there are about nine that make you wonder, “What in the name of Pierre S. du Pont were they thinking?” Also, six out of ten statistics are made up on the spot. Anyway, here are what we believe to be the 25 most monumental misuses of this maleable motorcar masking medium. 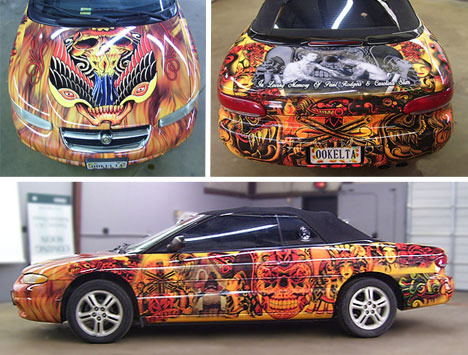 Cloaking one’s car in a badass motif featuring skulls, guns and tribal ladies is one way to get attention. A great way to get even more attention – albeit the wrong kind – is to use a first-gen Chrysler Sebring convertible (in its day the darling of rental fleets in the Sunbelt) as the car to be wrapped. Your homies who know urban art will give you props, while those who know cars will give you the cold shoulder.

Just try to tuna it out 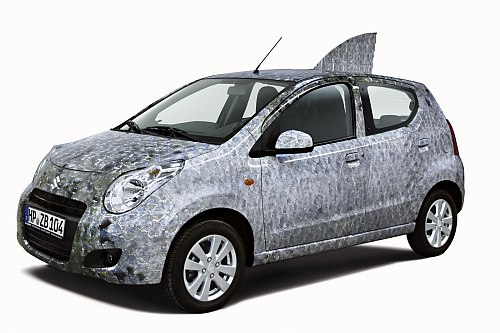 Just because the styling of a vehicle resembles something else doesn’t mean you should try to emphasize it. Exhibit A: the Suzuki Alto has a face that reminds some people (us included) of a fish. Suzuki decided to not only wrap it in a scaly skin, but also give it a dorsal fin. Some may think it’s cool; we aren’t taking the bait. 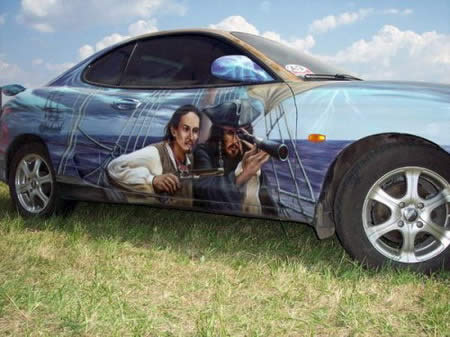 Okay, we get that you really, really enjoy the series of pirate movies loosely based on that one ride at that one theme park in Orange County that shall remain nameless for many of the same reasons the vinyl wrap on your car features artists representations of the main characters rather than actual photos. And we get that you don’t have the budget for anything fancier than an early Hyundai Tiburon. But combining the two? Really?

Because I need energy for a Sam’s Club run, dammit! 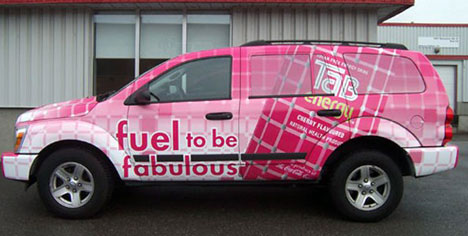 Question: When picking the vehicle to serve as a rolling billboard for your targeted-at-women energy drink, what qualities do you look for? Cute, eye-catching stylings? Sporty performance? Or do you just say “Screw it” and plaster your product’s propaganda on a garden-variety midsize SUV that screams “peewee football” louder than it does “female empowerment?” Yeah, we thought so.

Oy, must be the moolah 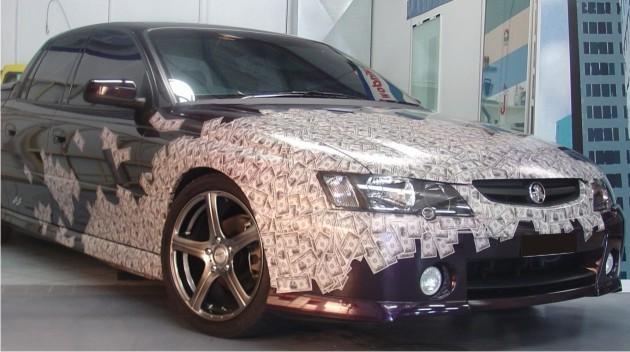 Okay, this one just has us stumped. The wrap job, we mean; we totally get the appeal of the Holden Crewman, an Aussie vehicle that basically amounts to a crew cab El Camino. But the front end covered in cash? Is it a hint at the huge investment made in the name of adding power? Is it a tribute to 63% of all rap videos? Is it a screed against Big Banking? Elucidate, mate. 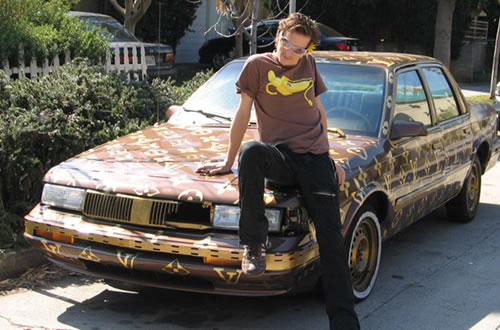 We can’t really tell if the person behind this A-body abomination was trying to be ironic (we hope that’s the case) or he seriously thinks a late ‘80s jalopy dressed as a handbag will be regarded as cool in lands both far and wide. Either way, the end result is an Olds Cutlass Ciera that’s hardly the classiest thing on the road. Maybe a Gucci-pattern Mercury Topaz would fare better? 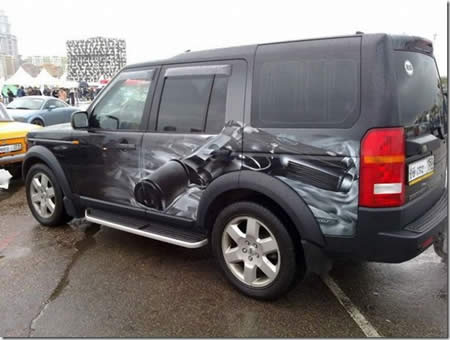 From the “Celebrating the Second Amendment” file comes this late model Land Rover with a silenced pistol adorning its flanks. While we doubt it’s owned by an actual hitman (Though you never know…), the detail and attention lavished upon the artwork would ensure we were always on our best behavior around said owner.

The atrocities of war (colors) 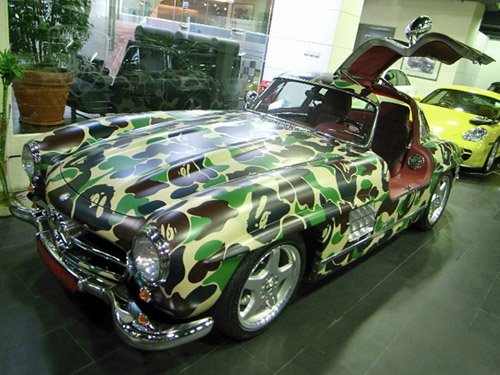 Imagine if someone blew his nose on a corner of the Shroud of Turin. Got that picture in your mind? Good, because that’s kind of what BAPE Clothing founder Nigo has done with this 1954 Mercedes-Benz 300SL Gullwing. It may be just a wrap, but the stain of ridiculousness will stay with this classic forever. 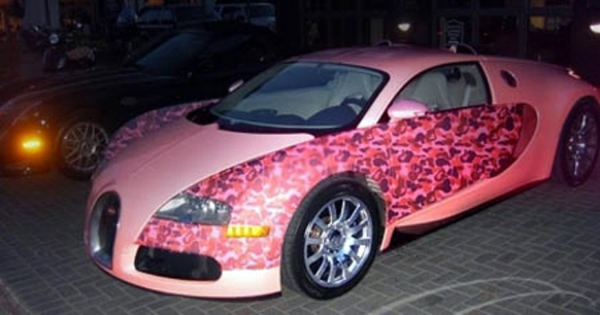 Not content to merely offend the sensiblities of vintage car lovers, Nigo had this Bugatti Veyron covered with the very light red livery seen here. We give him points for bringing out the supercar’s lines, but deduct about five times as many markers for the way he went about doing so. Also: If it really is one of those magic eye puzzles, we’re pretty sure the hidden 3D image is NSFW. 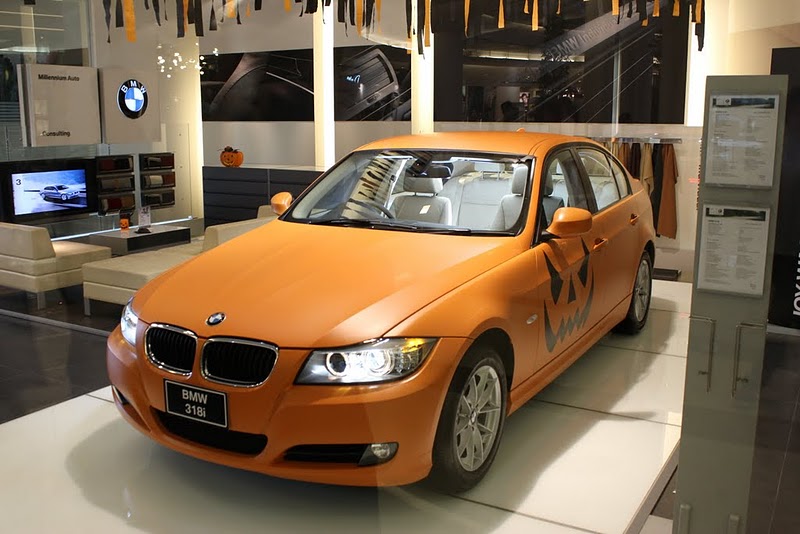 As car commercial cliches (say that three times fast) go, few are more prolific than giant bows hawking holiday/model year end sale events. But what about the other special times of year? Apparently, if it’s Halloween and you’re this BMW dealer, you wrap one of the 3 Series sedans on the showroom floor in this garb(age). Considering the only jack-o-lantern faces are on the front doors, we’re hanging this on the Wall of Shame of shame for half-assed (or is that quarter-assed?) execution of what could have been a nifty idea. 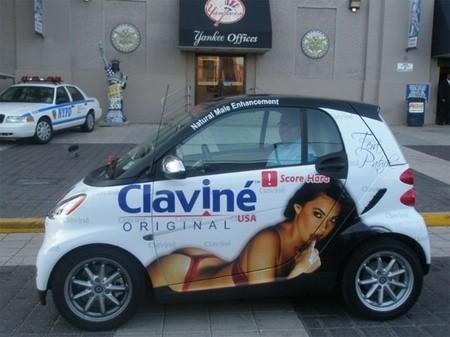 So let’s get this straight: You’re selling a product that’s supposed to make men bigger down there, yet the vehicle with which you’re hawking this product is the smallest new car sold in America. Were you trying to be cheeky, or did you just not take a moment to stop and think this through? No hurry to answer that; let the blood flow back to your head first. 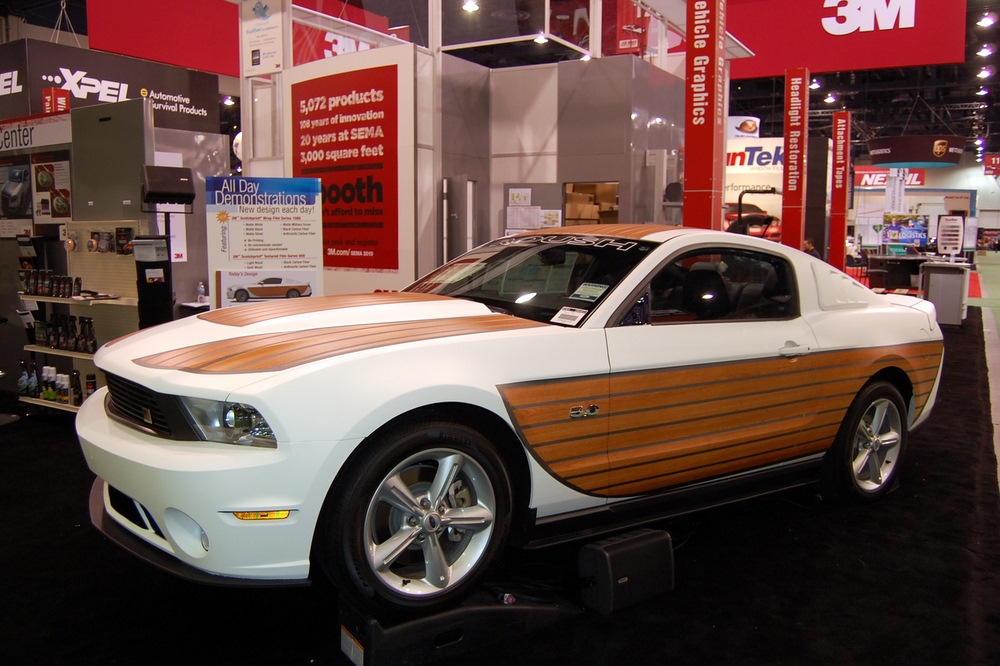 Inherent tackiness aside, there are some vehicles on which fake wood just belongs: the Jeep Grand Wagoneer. A 1968 Mercury Park Lane. Damn near every full-size American Station Wagon made between 1970 and 1996. Notice how this list doesn’t include the Ford Mustang. The very idea is like a finger to the back of the mouth, but the seemingly slapdash, haphazard arrangement of the stuff on this Roush-tweaked 2011 GT practically screams, “Where is your god now?”

Sometimes, compromise is a bad thing 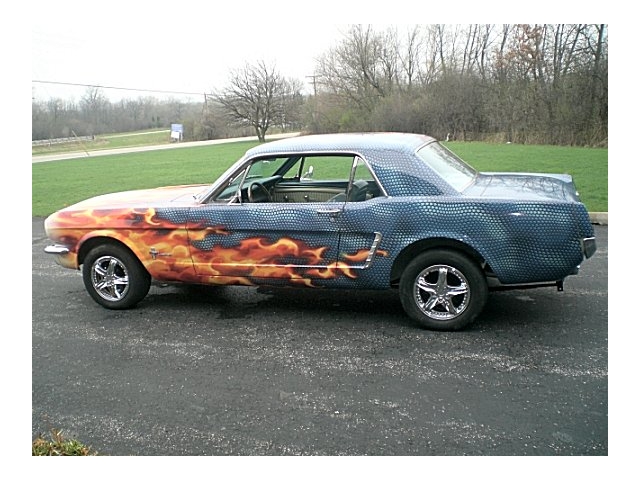 Speaking of desecrating America’s favorite pony car, what happens when you can’t decide between a flame job and reptile skin? Do both, of course! Now that we look at it, they may have been going for a dragon vibe, but couldn’t they have picked something more suitable than a ’65 notchback? 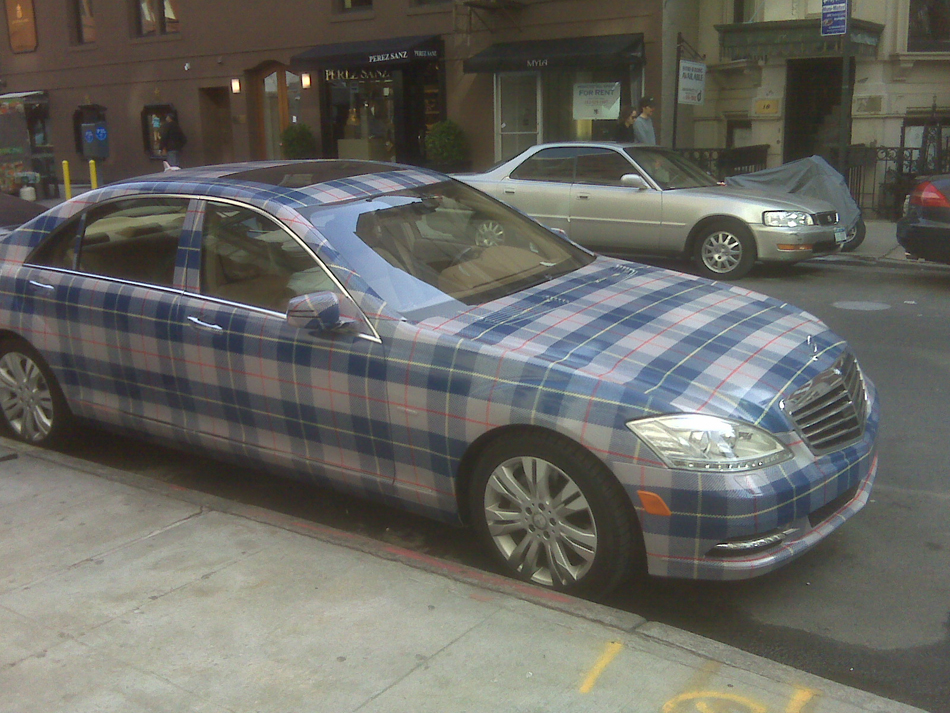 The Mercedes-Benz S-Class is elegance and German precision personified. So what would compel someone to cloak his or her example in plaid? We don’t know either. Perhaps it’s to match a favorite item of clothing. Or a favorite tablecloth. Or maybe they’ve just created a persona of a wealthy lumberjack. 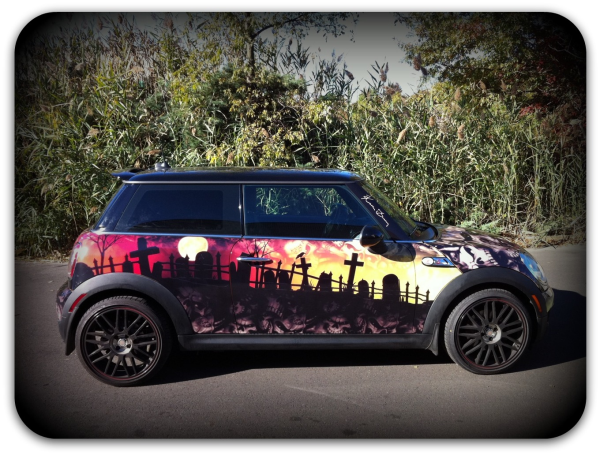 Mini has staked its reputation on being cute, playful and altogether cheerful. Consequently, we’re having some difficulty taking this whole cemetery/skulls motif seriously. If it was applied to something like a Viper or Lamborghini, sure. But a lovable little round-headlight hatchback? Not. So. Much. 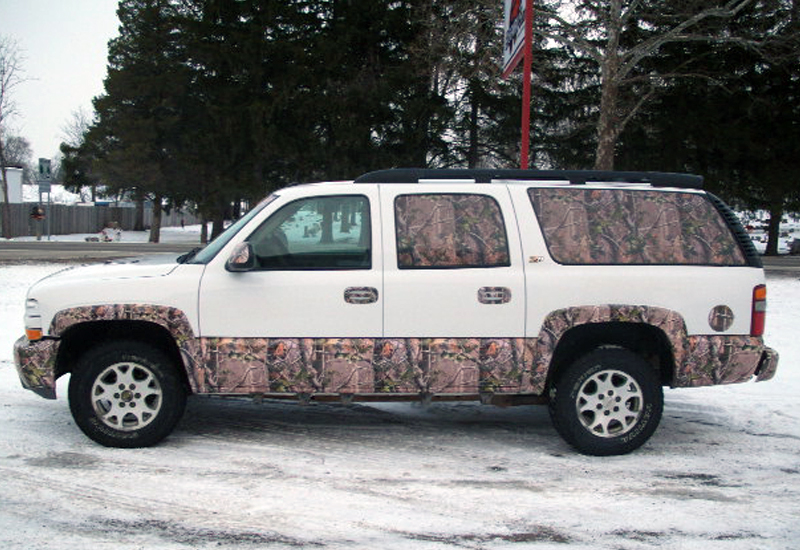 Normally, when camoflaging something, you want to cover as much of the visible surface as possible. It would appear that whoever redecorated this Chevrolet Surburban didn’t get that memo. Though if it is actually going to be used for hunting, it might cause the game to stand still in a state of confusion just long enough for Team Human to get off a kill shot. 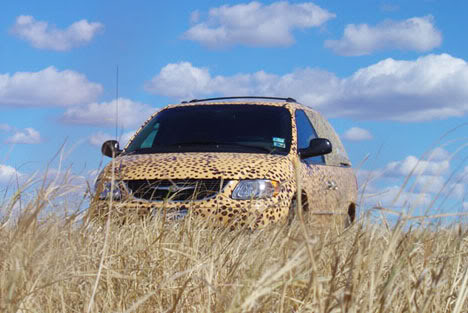 Here we see the rare spotted breed of American minivan, prowling the savannah in search of a soccer field. When it locates a suitable playing surface, it will regurgitate the human cubs and a mother to allow them to engage in their athletic competition ritual. Once that’s been completed, they will…Ow! The goal’s that-a-way, urchin! What do you mean why am I dressed in a safari outfit? I’m making a damn documentary! 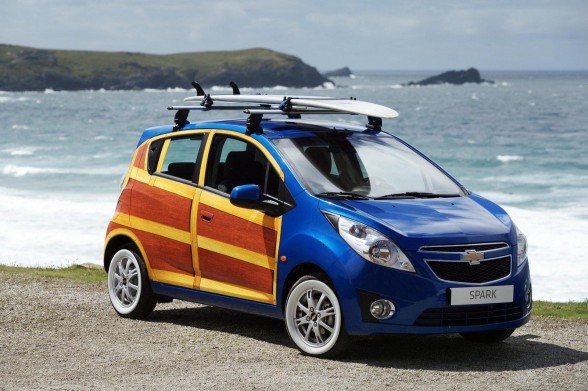 When they put fake wood on Chrysler PT Cruisers to evoke memories of the woody wagons so beloved by surfers back in the day, we said nothing. When they did the same to Ford Flexes, we said nothing. Now they’ve stuck it on the tiny, not-for-sale here Chevrolet Spark. With whitewall tires. Tonight, the madness ends. Or we’ll just plop down on the couch and see what’s on TV. Depends on what mood we’re in.

Uhh, what were we hiding from? 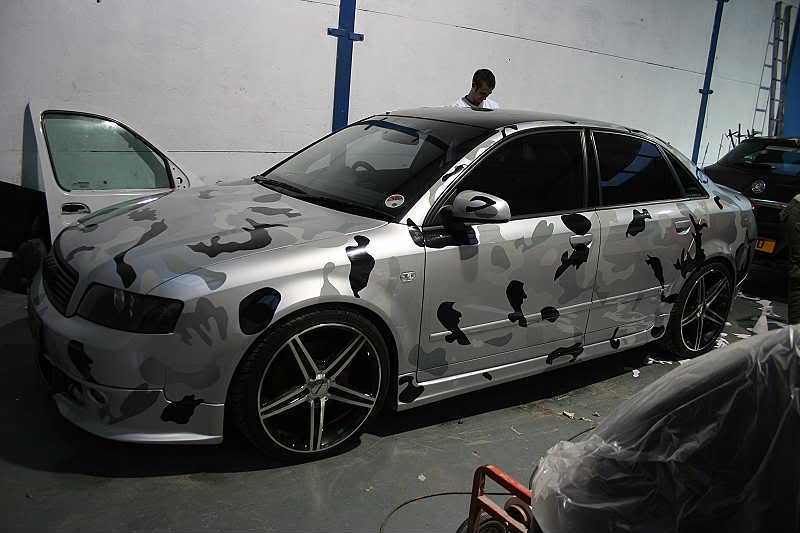 Camoflage comes in all colors and shapes, depending on what environment into which you want to blend or what fashion statement you want to make. If you ask us, we’d say this Audi A4 is intended to disappear in a pile of Rorschach tests. Heh, we just analyzed a graphics package that resembles inkblots used to analyze your mind. Daily quota of meta-ness, met. 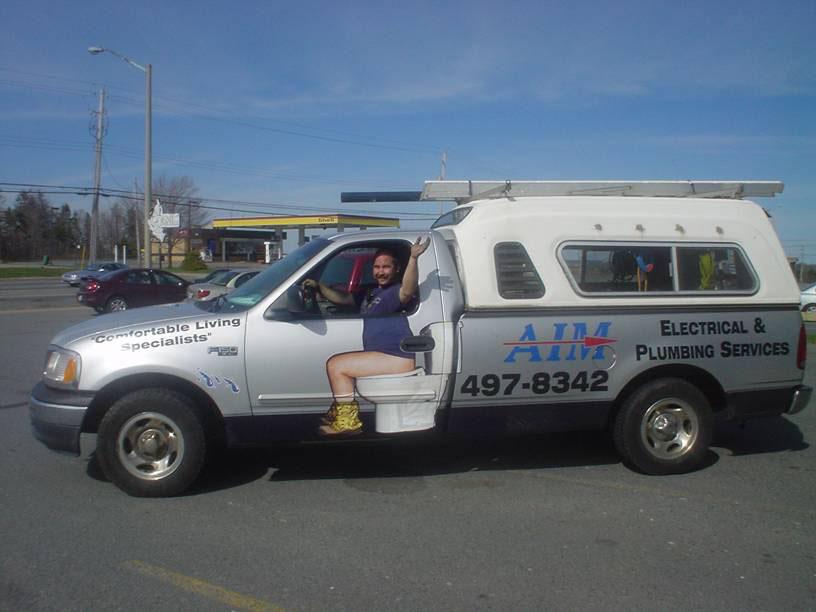 Vinyl wraps on business vehicles can really make more people aware of your company and the services it offers. And generally speaking, the more clever, the better. But there is such a thing as too clever, as this Ford F150 so ably demonstrates. We wouldn’t be surprised if it’s caused an accident or two.

Not so tough now, huh? 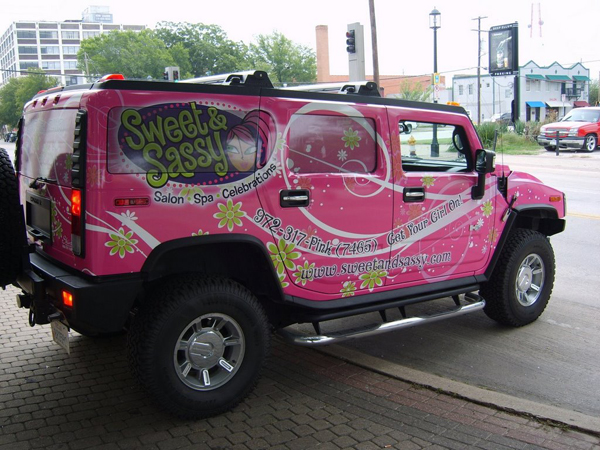 Whether you loved it or loathed it, the Hummer H2 had a reputation as being a rugged, masculine motorcar. This particular copy blows that all to bits. We know the type of vehicle can have just as much of an impact on visibility (if not a bigger one), but this whole ensemble is just puzzling, because how many women make connections between primping and pampering and a stump-smashing, shallow river-fording SUV? Would we be correct in assuming we can count that number on one hand? 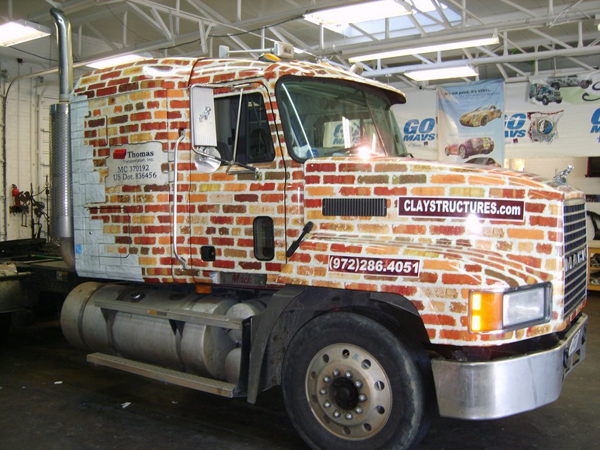 After both his brothers had perished while driving straw and wooden trucks, respectively, the last surviving son of Mr. and Mrs. Pig decided to buy a brick big rig. Unfortunatley, he was forever traumatized by an attempted truckjacking by a Mr. B. B. Wolf, and went back to school to become an accountant soon after.

Still waiting on the I Am Weasel Harley 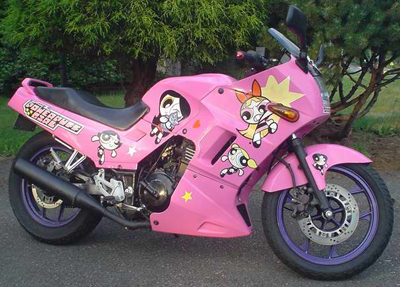 Not to be outdone by the four-wheeled world, there are plenty of motorcycle wrap jobs that leave us shaking our heads. One such two-wheeled fashion disaster is this older sportbike decked out with the likenesses of the popular-back-in-the-day cartoon heroines, the Powerpuff Girls. Maybe the owner is a fan of the show, or maybe the owner lost a bet. Regardless, the whole theme is a major source of cognitive dissonance. 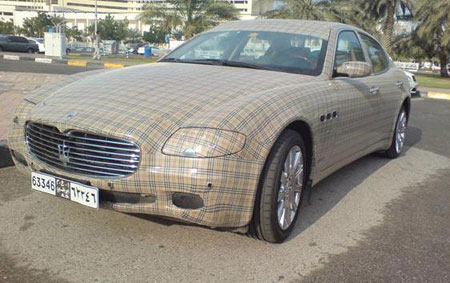 Like the plaid Mercedes above, this Burberry-bedecked (besmirched?) Maserati Quattroporte started out as a serious luxury sedan. But the caretaker of this Maser must have wanted to share with the world his interpretation of what Sherlock Holmes would drive if he was real and alive today. And on peyote. 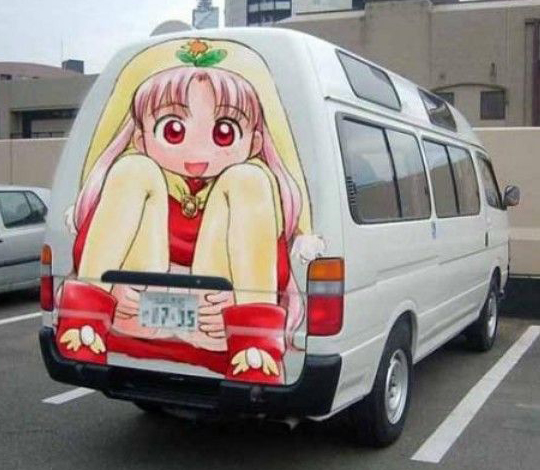 Congratulations! You’ve reached the end of the Internet. Thank you so much for playing. Now read a book, go outside, talk to a woman (in person, cheater) or do something else that’s useful before the next big meme slithers out of the ether. Hurry!