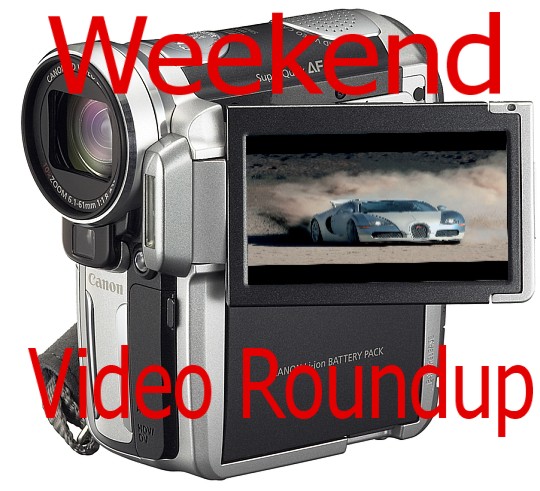 In a world that seems to be going madder and more unpredictable by the day (the ongoing crisis in Japan, the escalating conflict in Libya, Charlie Sheen taking his brain spasms on tour), it’s nice to have things you can count on. We hope that our Weekend Video Roundup will be one of those things for a long time to come, so make the jump and tune into our regularly scheduled collection of must-see motoring vids from the past seven days and nights.

Lots of gazillionaires collect super cool, super expensive cars, but James Glickenhaus is different. He’s a bigtime enthusiast; witness his commissioning of a coachbuilt Ferrari F430-based GT racer modeled after the Scuderia’s sports prototypes of the late ‘60s. And it will get raced, specifically at the 24 Hours of the Nürburgring, but first it’s getting tested at the considerably less daunting Paul Ricard HTT (High Tech Test Track) in France. As you can see from this on-board hot lap, the P4/5 isn’t lacking speed, or sound.

Now from the best rich supercar owner in the world to quite possibly the worst, we go to China. A wealthy fellow who owns a blue Lamborghini Gallardo took it to the dealer for service. He alleges that afterward getting it back from the dealer, it no longer worked right. The dealer and, apparently, the company denied any wrongdoing, leaving the owner in the lurch.

But he didn’t get mad; he got physical. On World Consumer Rights Day, the man wheeled the car out into the town square and invited the local media and citizens out to watch as he and a hammer and prybar wielding posse laid waste to the hapless Lambo. While we hate getting screwed by people and companies with whom we do business too, we really, really wouldn’t go so far as to destroy our new Lamborghini, even if it was a lemon. But we’re not rolling in dough, so what does our opinion matter?

Every American motorhead worth his salt should be singing the praises of Cadillac from the rooftops. Why? For the legendary luxury nameplate having the huevos to build a 556hp station wagon, offer it on the home market and not care how many it sells. But sometimes not even 556hp is sufficient, in which case Hennessey can turn the wick up to 650hp. Coincidentally, that’s just enough to take on a stock Nissan GT-R on the dragstrip.

What would the world be like if metal could be molded and shaped like clay? Well, for starters, guys like Ron Covell and Ken Sakamoto would need to find new lines of work, but it would also be possible to literally handbuild car bodies and chassis from scratch. Audi has brought this scenario to reality (or at least very convincing CGI) for this European spot for the new A6. Even if you can’t mold aluminum and steel in gauges that thick with your fingers, combining the two materials in the same car is pretty slick.

While Smart may be struggling in the U.S. market, there’s no denying the Fortwo’s unique size and shape opens up a world of possibilities for customization. A battery-powered Electric Drive Fortwo that has been covered in tiny mirrors like a disco ball is being used as the basis of a four-wheeled prop for the movie Pixel City. It also has a starring role in the music video for supergroup Apparatjik seen above. Why are you still reading this? You should be dancing!