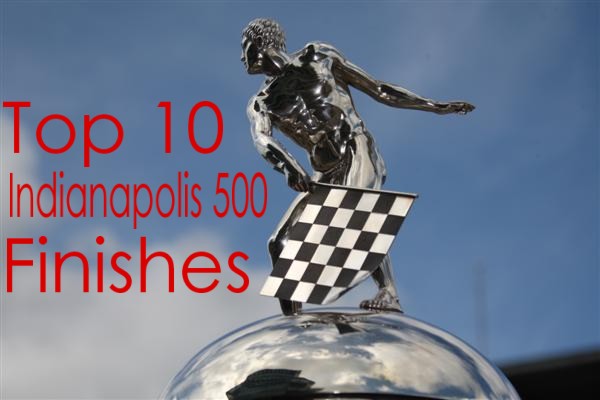 While it’s painfully easy to pile onto the Indianapolis 500 in its current form thanks to things like shrinking entry lists, spec tires, a spec chassis, two engine suppliers and increasing apathy from the public at-large, it’s still an incredible event. There’s likely not a single race on earth that can lay claim to as much history, pageantry and – many still maintain – prestige as this Memorial Day Weekend motorsports classic. The 500, together with Formula 1’s Monaco Grand Prix and NASCAR’s Coca Cola (nee World) 600, comprises the racing fan’s highest of high holy days.

And the cathedral of speed that is the Indianapolis Motor Speedway has witnessed some truly thrilling finishes over the past 102 years. Naturally, some of these have been more thrilling than the rest, with the truly awe-inspiring ones being talked about with off-the-charts reverence by die-hard fans. Here, then, presented in chronological order in honor of Sunday’s 97th Indianapolis 500, are the 10 conclusions to the Greatest Spectacle in Racing that will live forever in motorsports lore.

We know this piece is about the best finishes in Indy 500 history, but 1960 also happened to be the year of the best one-on-one battle in the race’s history. From the drop of the green, Jim Rathmann and defending race winner Rodger Ward jointly stamped their authority on the day’s proceedings. They passed the lead back and forth more than 20 times, thrilling the capacity crowd. It looked like the finish was going to be insanely close, but it wasn’t to be: Ward backed off on lap 197 in order to finish the race on a badly worn right-front tire, thereby opening the door for Rathmann to take checkered flag first.

It looked like the 1967 Indy 500 was going to be a walkover by Granatelli Racing and 1963 winner Parnelli Jones. Granatelli’s radical all-wheel-drive turbine-powered machine – nicknamed “Silent Sam” for its rather quiet operation – had the kind of speed and traction that the reciprocating-engined competition couldn’t hope to match. However, with just four laps remaining, a bearing in the transmission worth about $6 cried “Uncle,” leaving Parnelli to coast into the pits as the delirious crowd cheered new leader A.J. Foyt onward to victory. But it was no picnic for Super Tex, either: A final-lap pileup on the front stretch meant Foyt had to guide his Coyote-Ford through a labyrinth of wreckage before he could sew up his third Indianapolis victory.

Early in the 1982 event, it looked like that year’s race would be most remembered for the start crash that saw Kevin Cogan lose control of his Penske-Cosworth, taking out crowd favorites A.J. Foyt and Mario Andretti. However, the finish made a great case for usurping the spotlight: Penske’s Rick Mears was rapidly chasing down leader Gordon Johncock, who was driving one of Pat Patrick’s Wildcat–Cosworths. Coming to the white flag, Mears was able to pull alongside Johncock, but the 1973 winner was ahead by just enough to close the door. The next lap, Mears was able to catch up, but couldn’t get as close as the lap before: Johncock won by 0.16 of a second, the closest ever finish to that point.

The 1986 Indianapolis 500 was delayed a full six days due to rain, finally running on Saturday, May 31st. As history proved, it was worth the wait: Bobby Rahal blasted past Kevin Cogan on the last restart and held on to win for his car owner, friend and mentor, Jim Trueman. At the time, Trueman was battling terminal cancer, and barely had the strength to take a sip of the tradition bottle of milk presented to the winner. Eleven days later, he was dead, but not before being able to savor the greatest day of his motorsports career.

In the late stages of the ’87 race, things were looking bleak for Team Penske: Mears and Danny Sullivan were out of the race, their new fast-but-frail Ilmor-built Chevrolet engines both having expired, and the team’s third-driver, Al Unser Sr., was two laps down to leader Mario Andretti. Then on lap 177, Andretti’s Newman-Haas Racing Lola-Chevy ran into mechanical troubles, handing the lead to second-place man Roberto Guerrero. Guerrero subsequently had trouble exiting the pits on his final stop due to clutch trouble, which handed the lead to Unser. Even after a late race restart, Unser was able to hold on and tie Foyt’s record of four Indy wins, as well as set the still-unbroken record for oldest winner of the 500 (He was five days shy of his 48th birthday.).

But what makes Big Al’s feat truly remarkable was that neither he nor the car he was driving was supposed to be in the race: Penske’s third entry for the Month of May was veteran Hawaiian shoe Danny Ongais. But a crash during practice resulted in a concussion for Ongais and a totaled Penske PC16 chassis. So the Captain signed Unser – who Penske had let go when he downsized his team – and rolled out the backup car: A year-old March-Cosworth that, prior to Ongais’s shunt, had been sitting in the lobby of the Sheraton hotel in the team’s then-hometown of Reading, Pennsylvania. Not bad for a couple of old substitutes…

Two-time Formula 1 World Champion Emerson Fittipaldi had a very strong car for the 1989 Indy 500, but with four laps remaining, Al Unser Jr. was able to take the lead while the two were negotiating lapped traffic (They were the only two on the lead lap.). With two laps to go, it was Unser’s turn to get hung up behind backmarkers going down the backstretch; Fittipaldi dove to the inside as the pair entered Turn 3. The Brazilian’s Marlboro-sponsored Penske-Chevrolet bobbled, tagging the left rear wheel of the American’s Valvoline Lola-Chevrolet and sending it spinning backwards into the wall. Fittipaldi won the race under caution, and Unser (who still finished second, since they were so many laps ahead of third-place Raul Boesel) gave him a double thumbs-up as his rival drove past.

The 1992 edition of the 500 was the 76th running, and it was run in unseasonably frigid temperatures, meaning drivers struggled to get their spec Goodyear tires up to temperature. The result of this was absurdly-high attrition; hell, Guerrero – who was on pole with a new track record in one of drag racer Kenny Bernstein’s Lola-Buicks – spun and crashed out on the pace lap! By the end of the race, the first of the two survivors were Unser Jr. and Canadian Scott Goodyear. Goodyear spent the last seven laps stalking Unser, both of them orbiting the Speedway as fast as they dared. Coming out of the fourth turn on the last lap, Little Al’s Galmer-Chevrolet got slightly out of the groove, forcing him to lift. This allowed Goodyear to get a run as they hurtled toward chief starter Duane Sweeney’s checkered flags, but by the time they got to the Yard of Bricks, he wasn’t quite close enough. Al Unser Jr. won by an official margin of 0.043 seconds (The actual margin was even closer, thanks to the Galmer chassis’ atypical scoring transponder placement.), a gap that remains the closest in the race’s history.

Few Indy 500 rookies have had as much weight of expectation placed on their shoulders as Marco Andretti did in 2006. Son of Michael and grandson of Mario, the handsome 19-year-old was expected to not embarrass himself, but come the final restart of the on lap 196, Marco found himself in second place, right behind his dad (who was also his teammate and car owner). With three laps to go, Marco blew by his old man down the frontstretch, but Team Penske’s Sam Hornish Jr. – who at the time had two series championships to his name but had yet to even finish an Indy 500 – was coming fast. Hornish got by Michael and had a look under Marco in Turn 3 on the penultimate lap, but the third generation driver slammed the door on him, forcing him to back off.

Marco was home free, right? Ah, no. All through the 200th and last lap, Hornish closed in once more. Off the final turn, he was right on the kid’s gearbox. Andretti moved low to block, but before he could close off the bottom completely, Hornish was able to make a slingshot pass to win. It was the first time in the race’s history that the driver leading the 199th lap failed to win, and it was yet another bitter defeat for the Andretti family, who to this day has only Mario’s 1969 victory to show for what we’re betting is close to 100 total starts by Mario, Michael, Michael’s brother Jeff, their cousin John, and Marco.

Two years ago the Indianapolis 500 celebrated its 100th birthday (but not its 100th running; it took a few years off during both World War I and World War II), and the finish of that race was one for the ages. One by one, drivers leading the race pulled into the pits to make sure they didn’t run out of fuel. But Panther Racing’s J.R. Hildebrand, an Indianapolis 500 rookie from Northern California, stayed out; he had the fuel to go the distance.

Hildebrand looked set to pull off a stunning upset…right until he tried to put a lap on fellow rookie Charlie Kimball. On the last corner of the last lap, J.R. flashed past Charlie on the high side. However, with his right side wheels out of the groove, Hildebrand slid helplessly into the outside wall, pancaking the National Guard Dallara-Honda’s right-hand side. And at first, it looked like J.R. would have enough momentum to get across the line ahead of second place runner Dan Wheldon (who was closing fast), or the yellow flag was going to come out and freeze the field. But neither of those things happened, and Wheldon, in a one-off drive for former teammate Bryan Herta’s squad, bagged his second Indy 500 win. Sadly, Wheldon would lose his life less than five months later in a horrific chain-reaction crash during the IndyCar season finale at Las Vegas Motor Speedway.

The waning laps of last year’s Indy 500 looked like a cakewalk for Target Chip Ganassi Racing teammates Dario Franchitti and Scott Dixon. But with about two laps to go, Takuma Sato arrived to spoil the party. He dispatched Dixon on lap 199, and was closing rapidly on Franchitti as they took the white flag to start the last lap. Sato surged underneath the Scot as they approached Turn 1, but Franchitti gave him little more than the bare minimum of room. The tail of Sato’s car stepped out – barely missing Franchitti’s Dallara-Honda – and into the wall he went, leaving Franchitti to take his third Indianapolis 500 win (all of them under yellow flag conditions).