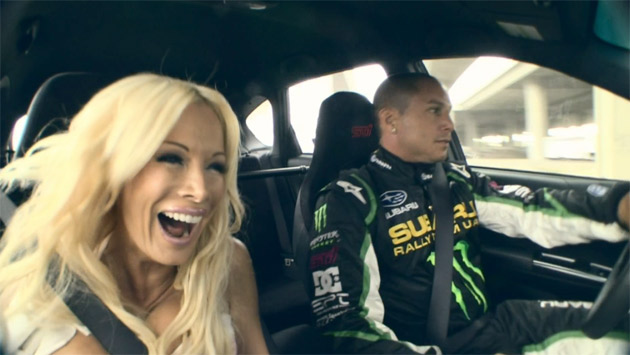 Subaru feels people get something special from their cars. This is probably most true with their high-performance model, the Impreza WRX STI. Owners of these incredible machines make sacrifices in the name of performance.  For example my 2006 didn’t even have a trunk release button on the key fob. I didn’t care. Knowing this, they find creative ways to illustrate it in their ads.

For the 2011 Impreza WRX STI, Subaru wants to highlight an attribute the car provides: G’s. I’m not talking about the kind Snoop Dogg stacks in his private bank vault, I’m talking about the kind you get from an F-16. It’s a simple concept really; AWD + 305hp=Lots of G’s. But Subaru wants to make sure anyone in the public understands what this means. So they put 5 different people in the passenger seat of an STI driven by Rally Driver Dave Mirra and filmed 5 videos to illustrate it. I hope they can wash that seat. Make the jump to see why.

In my experience AWD cars with lots of power can extract two types of reactions: absolute joy or absolute terror. For example, navigating snowy roads while drifting at a 45-90 degree angle causes me to grin like Tom Brady after a good night in with the missus. It caused my mom to scream and curse at me. Different strokes…

It’s no different with Subaru‘s ads. They took a diverse “focus group” out for these ride-a-longs, and that just makes it more entertaining. Watch as Dave Mirra proves that guys with tattoos aren’t that tough, and there’s no better method to evening out collagen injections than the a visit “Doctor” Mirra’s “office.”

As great as the ads are, let’s hope Subaru gave the 2011 Impreza WRX STI more than 5hp bump and a strange wing. Hopefully it’s got some new suspension, according to Mitsubishi, suspension gives you lots of G’s.