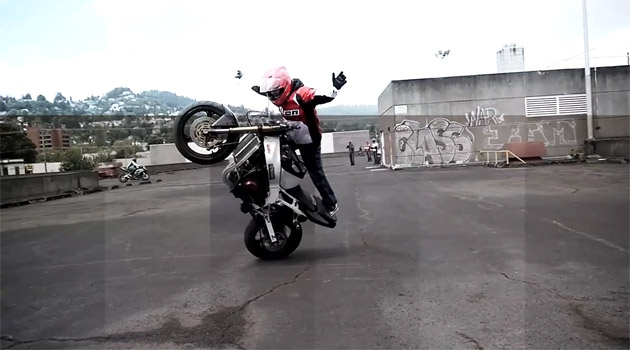 For as long as many people can remember, motorcycles and stunts have been joined at the (frequently broken) hip. From the diamond-balled daredevils of the Roaring Twenties who stared the Grim Reaper and nausea in the face by riding inside the Wall of Death, to the marrow-mashing exploits of a certain E. Knievel in the ‘60s and ‘70s, to the crotch rocket mounted hoons of today, wherever two wheels and an engine can be found, serial thrillseekers are often close by.

Of course, the laws of physics and the basic design and engineering principles behind a motorcycle limit what can be done with it, but that hasn’t stopped some truly gifted and/or crazy riders from trying to find those limits and perform right on the edge of those limits. And no present-day rider we’ve seen better exemplifies this pioneering spirit than Shin Kinoshita, who rides for the Icon-sponsored Empire team. Think we’re exaggerating? Make the jump to watch this prodigy in action and decide for yourself.

Now that you’ve finished picking up your jaw off your keyboard, you’re probably asking yourself, “Who is this guy? How did he get so good? What’s his technique?” Well, as you found out from the video, he’s a man of few words, preferring to let his circumvention of the laws of physics do most of the talking. And talk it does, from beyond-vertical wheelies to “tireplants” to twirls and spins worthy of the world’s most prestigious ballet companies. It’s enough to make us contemplate the feasibility of putting on a production of “Swan Lake” using stunt riders and their bikes. That’s right, brothers, you know your lady wouldn’t have to drag you to see that (though you may have to drag her).