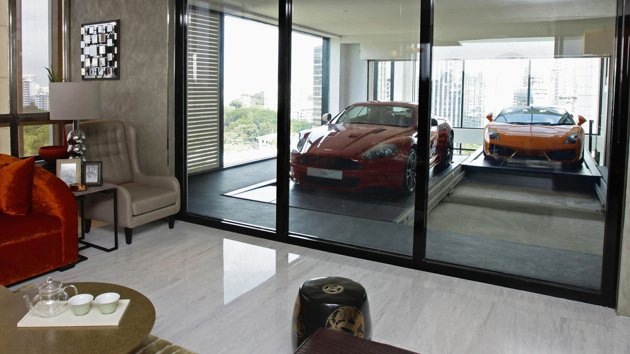 Living in a crowded megalopolis poses all sorts of challenges and pitfalls for owners of fancy cars. Obviously heavy traffic, potholed streets, and belligerent bicycle messengers are major causes for concern, but even these pale in comparison to this one seemingly simple conundrum: Where do you park? In cities filled with older construction like New York and London, street parking is the norm…if you can find it. Newer urban living edifices tend to have parking garages in the basement, but there’s still the specter of door dings and rusty water dripping from overhead pipes looming large. And if you forget something in your car and live on one of the upper floors, it’s a long elevator ride down and back up, and there’s a good chance you’ll run into that loaded widow who lives in the penthouse with that stinkeye-giving Pomeranian she named after her dead husband. Awkward pauses ahoy.

If only there was a way to put a garage next to each individual apartment. Well, as it turns out, there is a way to do exactly that. And as you can see in the videos below of a new apartment tower in Singapore, it’s just as cool as you think.

Located on Scotts Road between Carinhill Road and Clemencau Avenue North in Singapore’s scenic and vibrant Orchard neighborhood, the 30-story Hamilton Scotts boasts 54 luxurious apartments and two palatial penthouses, as well as ground floor features shared by all residents such as a pool, hot tub and a gym. The three-bedroom, three-bathroom apartments measure roughly 1,300 square feet each and feature all the amenities you’d expect (large balcony, access via stairs or private elevator, and superb views of the South Asian city-state), and one that you might not. Each apartment has its own “en-suite sky garage” with room for two vehicles.

Cars get between the ground and the floor on which their owners reside via one of two elevators. When coming home, residents drive their cars onto a turntable, get out (No residents riding the car elevators, presumably for liability reasons.), and press their finger against a biometric sensor that reads their fingerprint to determine where the vehicle is supposed to go. The elevator system then picks up the platform on which the car is parked, draws it into the elevator shaft, takes it up to the right floor, and pushes the platform/car combination onto the appropriate “car porch.” When all is said and done, you can sit on your living room sofa and look through a big picture window at your Ferrari, Bentley or whatever. Like a boss.

Want to make Hamilton Scotts your new home (or, more likely, one of your homes)? Be prepared to shell out at least $7.5 million U.S. (Yes, a seven, a five, and five zeroes.) to own one of the 54 “regular” apartments (We also found units for rent starting at $17,000 a month.). And if you want a penthouse (which has four parking spaces), you’ll have to lighten your bank balance to the tune of $24 million U.S. We don’t care how much you’re making; that is a colossal amount money. However, if you have tens of thousands of Apple and/or Google shares taking up space in your portfolio (and don’t mind living in a land where chewing gum is contraband), we can’t see much else wrong with this place.