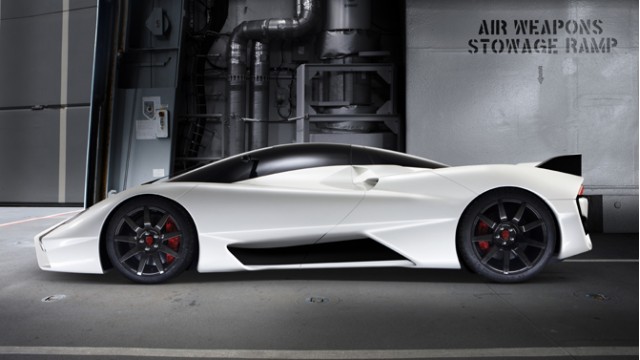 Last fall the folks at Shelby Supercars pulled the proverbial bedclothes off the successor to their first production model, the SSC Ultimate Aero. As was the case with the first car, the specifications that were announced are straight-up gobsmacking: A twin-turbo 6.8L V8 generating 1,350hp, a carbon fiber monocoque chassis, a 2,600 lb. curb weight and, the cherry atop this awesome-sauce-drenched sundae, a 275 mph top speed.

However, the name “Ulitmate Aero II” doesn’t quite register as high on the badass scale as all of those other things…which is why the new car won’t be called the Ultimate Aero II. Indeed, company founder and head Jerod Shelby and the rest of the team at Shelby Supercars they’d have to locate a label that fit the car’s essence and strike fear into all challengers and would-be challengers, including the 16-cylinder physics-defiers crafted by a certain German-owned French company. So what did they come up with? Find out from the man himself after the jump.

So how do you like Tuatara? Granted, there will probably be a few people who will accidentally misspell it in a rather naughty way (and a few of that few will be smartasses and/or Bugatti engineers who do it intentionally), but overall we kinda like it. The fact that it shares its name with a spiny, rather large lizard from New Zealand (which is also home to the Maori people, the folks who coined the word and are original inhabitants of the island nation) adds some cool points, but that that same lizard is supposedly the fastest-evolving DNA of any known animal is even more appropriate, given how different the Tuatara (the car) is from the Ultimate Aero.

Obviously, little other than the name was discussed, so we’re guessing more of the details (including firming up the powertrain plans) will come out as the beginning of production draws nearer. You can bet we’ll continue to keep a close eye on this all-American Veyron Super Sports foe throughout the coming months.