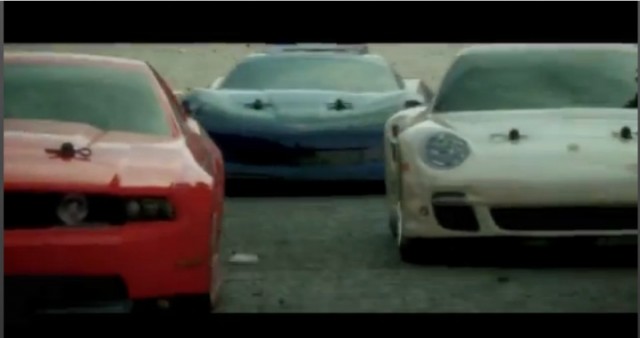 To the typical moviegoer, a Hollywood action flickisn’ttruly complete unless it has a white-knuckle car chase. And if the drivers in pursuit are law enforcement types, thereby creating a clear demarcation between chaser and chasee, that’s even better. It’s the classic cops and robbers trope, but with way more speed and danger to keep you on the edge of your seat (or at the very least, right next to the armrest).

Butwe’veoften wondered how the thrills of and spills of a car chase would translate to a smaller scale. Thankfully, so did Freddie Wong and Brandon Laatsch, the visual effects Wunderkinder tag team behind Rocket Jump and the FreddieW and FreddieW2 YouTube channels.They’velong dreamt of shooting a high-intensity car chase sequence (even with miniature or radio control vehicles), and thanks to some support from a prominent video game company wanting to promote a soon-to-be-released game, they were able to do just that. Make the jump to see the result.

Though it’s a bit of a stretch to call this a commercial, Electronic Arts (who will be releasing Need for Speed: Most Wanted on the 30th of this month) must be as pleased as punch with how this short turned out. The wide variety of street racer vehicles (Ford Mustang and Raptor, Nissan GT-R and Porsche 911 Turbo), the Corvette police cars, and the over-the-top action all capture the feel of the newest entry in the NFS franchise. And the production quality and camerawork is, as you’d expect from Freddie, Brandon et al, is top notch.

Speaking of the production process, no Rocket Jump vid would be complete without a companion behind-the-scenes/making of video. And the R/C car chase is no exception. Who knew you could, in fact, jump an R/C Mustang over an R/C helicopter? Or that flying Air Hogs R/C planes was once part of Mr. Wong’s early morning ritual? Well, thanks to this behind-the-scenes vid, now we all have that knowledge. And knowledge, as many of us learned at a young age, is power.