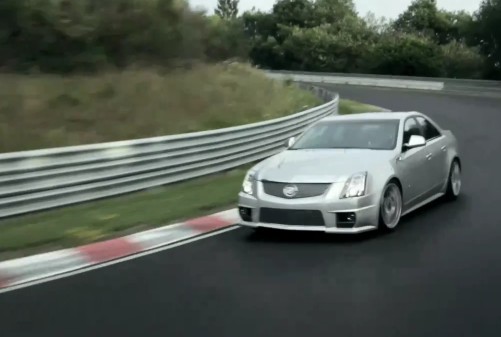 It should come as news to exactly none of you that we’re big fans of the second generation Cadillac CTS-V. With a 556hp supercharged V8, choice of an automatic or manual 6-speed tranny and the choice of sedan, coupe and – coming next year – wagon (*swoon*) wrappers, how could we not be in love with this Yankee Doodle dandy of a super sedan?

Sadly, as the kids are supposedly fond of saying these days (We can’t say for sure because we have trouble hearing them as they walk past while we sit in our folding chair in the driveway.), “Haters gonna hate.” The Debbie Downers both here and across the seas are fond of jibing the Killer Caddy for things like needing forced induction to best its European rivals’ power figures (even as mounting pressure from Green Borg is now prompting them to follow suit), being porky for its size and being assembled with impact wrenches and rubber mallets by guys named Jerome and Bucky instead of with hex-head screwdrivers and tweezers by guys named Detlev and Heinrich. To that we (and now Cadillac’s marketing department, as evidenced by the new commercial after the jump titled simply “Competition”) say, “Numbers don’t lie.”

One of most important numbers pertaining to the CTS-V is 7:59.32. That’s the time in minutes, seconds, and hundreths of a second it took the CTS-V to lap the 13-mile Nürburgring Nordschleife, a time that just so happened to be the first sub-eight-minute lap of that torturous track by a stock production sedan. As the narrator points out, that time is quicker than those of both the BMW M5 and Mercedes-Benz E63 AMG. Of course, with the in-house hot rodders of those respective companies putting the finishing touches on new turbocharged evolutions of their midsize Überlimosinen, it looks like Cadillac will have to raise its game. But as the voiceover copy implies, the marque that less than a generation ago was best known for pillowy-riding, befinned, front-drive pseudobarges is planning to keep on raising its game. Hold onto your 401ks…