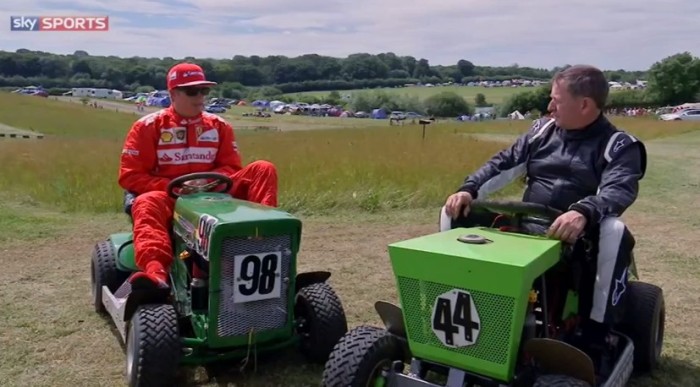 For those of us who pine for the days when professional racecar drivers loved to race even outside of their “day jobs” and refused to serve as corporate spokesbots even when the cameras and microphones were on, it’s very difficult to not have a raging mancrush (or plain-old-crush, in the case of the ladies out there) on Kimi Raikkonen. The tattooed Finn whose speech pattern is about as close to that of a Scandinavian Boomhauer as real life is going to get may have won 20 Formula 1 grands prix and the 2007 World Driving Championship with Ferrari, but he’s also competed in the World Rally Championship and NASCAR’s top two feeder series (the Camping World Truck Series and the Nationwide Series), and has raced snowmobiles and powerboats (the latter while wearing a gorilla suit) under the pseudonym James Hunt. Recently, though, Raikkonen – who has returned to Ferrari this year – faced what may be his most daunting motorsports challenge: Lawnmower racing.

However, the Iceman wasn’t alone in tackling this new discipline. He lined up against three members of British TV network Sky Sports’ Formula 1 broadcast team, all former F1 drivers: Martin Brundle, Johnny Herbert and Anthony Davidson. As you can see, Kimi did okay for himself, far better than he’s done so far this season (including his nasty crash at this past weekend’s British Grand Prix). Maybe he’s found his next career if he does in fact decide to retire from F1 after next year…