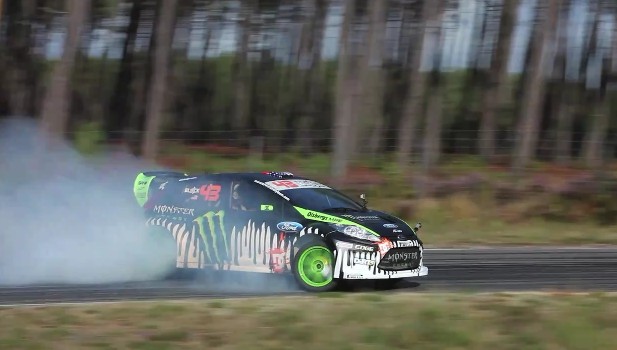 There is perhaps no more visible ambassador for the hoon community than Ken Block. What started out as an expensive hobby for the DC Shoes honcho has ballooned into a globe-trotting series of videos where sliding, spinning and doing donuts are elevated to an art form. What’s more, Block has also expanded his horizons to rallying, even making the leap to the World Rally Championship this past year.

It was before the French round of aforementioned WRC in September that Block and his Ford Fiesta gymkhana car were back in the country (Who can forget the last time they were there?) as part of a big DC Shoes bash held in conjunction with a pro surfing contest in the town of Hossegor. The day before the party, Block was giving rides to DC- and Monster Energy-sponsored athletes (as well as a local TV reporter) around the local go kart track. Did he tiptoe around the course so as not to frighten his passengers?

As you just saw, the answer is “Hell no!” While pro surfers Julian Wilson and Marc Lacomare are somewhat used to being at the center of adrenaline-pumping action (and had the facial expressions to prove it) the unnamed mademoiselle with the media made it clear that having her inner ears tossed and spun like tetherballs was a new sensation for her. Of course, if she was terrified riding shotgun with Kenny B, imagine what she would sound like on the back of freestyle motocross ace Charles Pages’ backflipping dirtbike.

But that wasn’t the end of the two-wheeled shenanigans. The big street festival the following night saw Pages and some of his friends mocking gravity to the tune of a live DJ and exclamations of bewilderment from the assembled lake of humanity. All of which begs the two-part question: Where will Ken and his whirling dervish of a hatchback show up next, and how will they blow our fragile little minds?