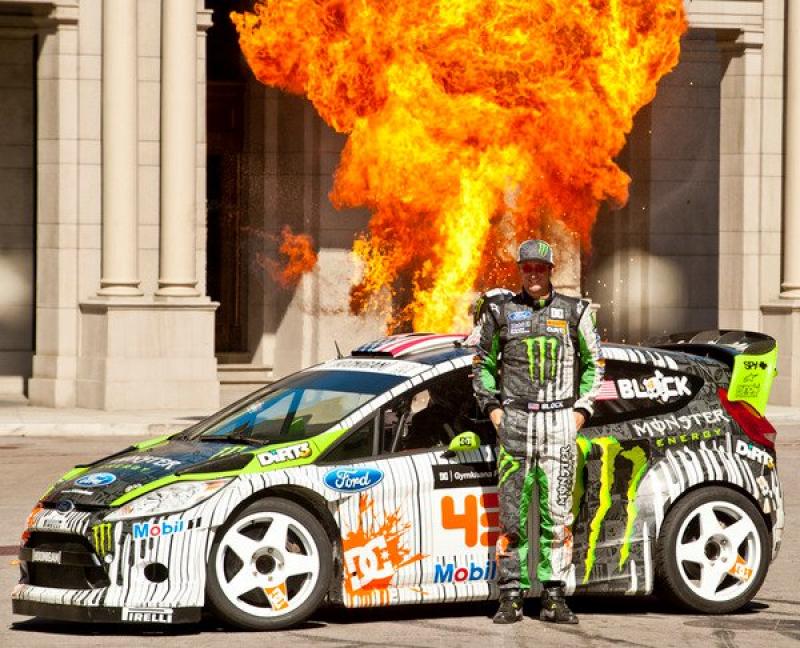 With every Gymkhana video he releases, hoon savant Ken Block subjects himself (and the people who help make those snuff-films-for-tire-lovers a reality) to the herculean task of making each sequel top its predecessor. But so far, they’ve arguably succeeded. The first was a fairly simple affair set at an abandoned military air base deep behind the Orange Curtain. It was followed by a noticeably more outrageous flick taking place on the docks of San Pedro (Fun fact: Many SoCal natives pronounce it “San Peedro,” which is no doubt the high school Spanish teacher equivalent of a dog whistle.), while it was in turn succeeded by the franchise’s first trip outside the U.S., specifically a historic autodrome outside the City of Lights.

So how do you top that last one? Apparently, you come back to the City of Angels and make prodigious use of the resources of the region’s best known industry. Is the final result – titled Gymkhana 4: The Hollywood Megamercial – sufficiently over the top, or does it fall flatter than an anorexic manta ray? Make like the General Lee and judge for yourself.

Now how many references and set pieces did you recognize? The riffing found in the title sequences was pretty nifty, and any trip around the Universal Studios Hollywood backlot is sure to be filled with amusing sights. Traveling sideways at ridiculous speeds in a steroidal, flame-farting Ford Fiesta will, inevitably, make the sights seem even more amusing.

But fancy CG titles and iconic movie sets can only get you so far; you need to throw in some extra nuggets to hold the audience’s attention. Some, like the Sasquatch on a ladder stunt and the formation forklifts, work well. Others, however, like the donuts around a guy (or in this case, guy in a gorilla suit) on a Segway, are sadly on the wrong side of the line separating fresh and played-out (We like to think gorilla man used the rocket to fly over Jaws.). And while we enjoy the artery-blocking antics of the lads from Epic Meal Time as much as the next heterotroph, their appearance is pretty *squak*ing token. Besides, anyone watching Gymkhana 4 ten years from now will likely be asking, “What was their deal, again?”

Overall, it pains us to report that, aside from some fairly giggle-inducing moments (Bollywood number with missiles FTW!), signs of fatigue are beginning to rear their ugly heads. We hope the (almost certainly) inevitable Gymkhana 5 is able to totally have its way with our brain the way the earlier ones did, but the fact of the matter is there are only so many ways to shoot and edit handbrake turns and donuts. Either way, it’s been a fun ride so far, and if it gets the young ‘uns more excited about cars than smartphones and Real Teen Mom Idols of Jersey Shore, then so much the better.