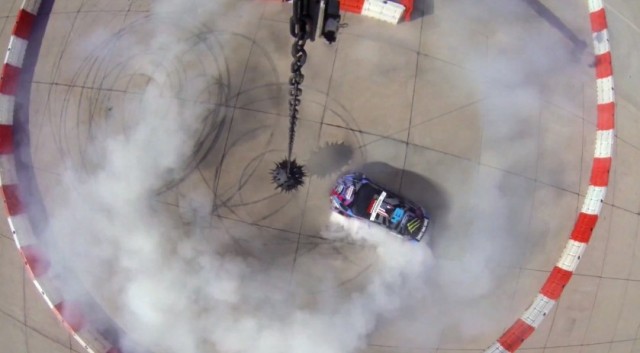 Is it possible to have too much of a good thing? Why don’t you ask the Korean kids who tried to play World of Warcraft for 96 straight hours, or the guy who…ahem, “strangled the snake” 42 times in a row? Oh, that’s right, you can’t, because they’re dead. Kinda makes the opposing arguments ring rather hollow, huh?

Of course, if the above conclusion still contradicts your belief, consider Ken Block’s Gymkhana video series. Sure, the first two or three were fresh and full of amusement. Lately, though, you get the feeling Mr. Block and crew are just going through the motions. This isn’t really their fault, mind you; the problem is that there are only so many ways to make severe oversteer entertaining. And a good many of those ways can be found in the just-released latest chapter in the saga, Gymkhana Six.

Though it may feature the wildest Gymkhana Grid course you ever did see, Gymkhana Six certainly lacks the sense of ambition of its predecessor which, as we all remember, made artful use of the city of San Francisco. However, because this particular Gymkhana vid is backed by Electronic Arts (which is using it to promote the impending release of Need for Speed Rivals), it does feature some police posers, both on Segways and in Lamborghinis.

Then again, when those two Lamborghini faux-lice interceptors are only traveling at half-a-mile-per-hour, what’s the point? Yeah, sure, it’s exciting to watch Kenny B orbit them with his fire-farting Ford Fiesta…for about two seconds.

Don’t get us wrong, this is a highly engaging and clever video…provided you divorce it from its predecessors. Were it up to us, we’d make the next Gymkhana video the last one, but we’d make sure we’d at least try to go out with a bang. Donuts around an original Matisse in the middle of a live-fire military exercise would certainly qualify…