In times as tumultuous as these, we’d be shocked, to say the very least, if the majority of statisticians didn’t report a noticable uptick in bank heist attempts over the past couple years. And while we obviously don’t endorse criminal activity of any variety, we can’t help wondering if there is such a thing as the perfect getaway car for such a task. Thankfully, it turns out we aren’t the only ones suffering from this perverse curiousity. In fact, the German hoons at GRIP were very, very interested in answering this question.

How do we know this? Well, for starters it appears they commendeered a disused military base complete with town-like sections of buildings and streets to test a vehicle’s agility, plus some long, wide runways for high speed running. Secondly, they’ve assembled a superstar collection of getaway vehicles (tuned models from Audi, Dodge and Porsche), plus one very special police car with which to play the game of cops & robbers about which young gearheads can only dream. So grab some poppin’ corn and make the jump for the video and an explanation of what’s going on, since all the dialogue is auf Deutsch. (Our friends who took Spanish instead in high school are totally jealous right now…maybe.)

Our story begins with co-host Helge holding up the mock bank while partner in “crime” (and TV show presenting) Matthias waits in the first getaway car, an Audi TTRS that’s been tweaked by the Four-Rings specialists at MTM. It features a turbocharged inline-five driving all four wheels (just as God and Jörg Bensinger intended), but MTM has boosted it to a honking 462hp.

Against this and the subsequent two getaway cars we have the spoiler in the form of cop-for-a-day (right down to the donut and Aviators) Niki and his ride, a familiar BMW 123d coupe massaged by the Bimmer whisperers at AC Schnitzer. How massaged? Oh, how does a 2.0L twin-turbo diesel four-banger with 240hp sound? For comparison’s sake, the base Corvette of 19 years ago – with a 5.7L V8 – was rated just five horsepower higher. Isn’t progress swell?

Anyway, the chase is on, and eventually the Audi’s tidy proportions, serious power and AWD bite prove too much for the little BMW. But after basking in their victory, the boys point out that the TT-RS is hardly optimal for carrying a big load of gold bouillon. For that, they’ll need something bigger like…say…a Dodge Challenger SRT-8. This particular Challenger has been gone over by the Yank tank experts at Geiger Cars, and features a supercharger that elevates the 6.1L Hemi V8’s output to 520hp (95 over stock), as well as the obvious matte black paint and larger rolling stock. 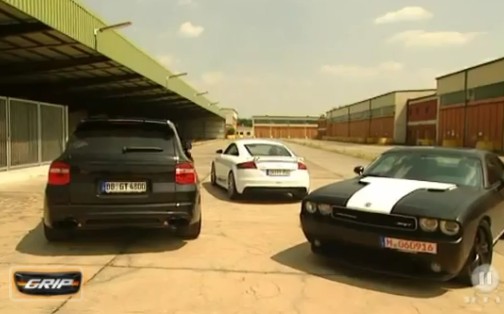 So our three Freunde hit the reset button, with Niki trying to reel in the Challenger. As it turns out, he succeeds, as Matthias struggles to put all that power to the ground smoothly. Humbled by defeat, he and Helge put their thinking caps back on and figure out that, in order to haul all those gold bars, they need something that’s roomy in back and has lots of power like the Dodge, yet is agile and can put all that power to the pavement like the Audi.

Solution? The Porsche Cayenne Turbo-based TechArt Magnum, which packs a hopped-up twin-turbo V8 with 680hp. More importantly, all that power is sent to all four tires, so they won’t have to worry about being stuck in time-wasting Samuel Hübinette mode in every turn. Turns out that (and the insane power) were the keys to victory over the po-po. Of course, at roughly $333,000 at current exchange rates, the TechArt Magnum is out of reach of all but the most successful currency snatchers…unless the thieves in question know a thing or two about pilfering cars, as well. Not that we encourage that sort of thing…