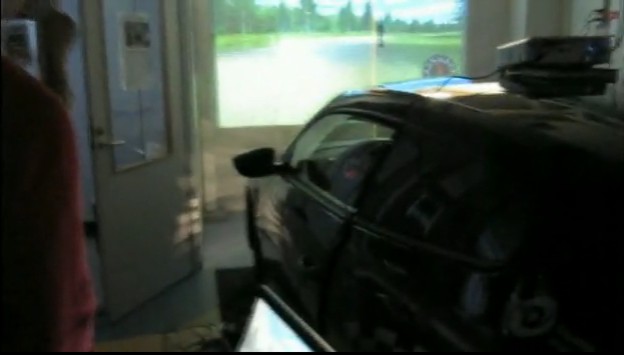 Accessory steering wheel and pedal setups can make driving games vastly more engaging and can often help improve your lap times. Having said peripherals installed on a frame or cockpit with a low-slung racing seat only magnifies these effects. But what if you want to go even further? Recently, the only way to really do that has been to invest in a big, super-expensive motion base that will tilt and buck you around in concert with the action on screen. But what if there was another way to complete the experience?

If the folks at Finland’s Karjak CarLab are to be believed, it involves turning an actual working automobile into the controller. For their project, they picked a 2009 Volkswagen Scirocco (the nifty-looking, not-available-here one) to serve as their controller/cockpit. Why not something older, cheaper and simpler? It turns out having a late-model car made the setup process quite a bit easier than it would have been otherwise. The car actually interfaces with the computer through its onboard diagnostics (OBD II) port. It would appear that the boys at Karjak found a way to intercept the electrical signals derived from inputs to the steering wheel, pedals and shifter that would otherwise go to the onboard computer and accident data recorder and pump those signals to their PC to control a game (in this case Bugbear’s excellent Rally Trophy).

The VeeDub’s nose appears to be resting on jackstands or some sort of pads to avoid putting strain on the steering system, and there is a projector on the roof to provide the visual stimulation and speakers for the aural stimulation. Drawbacks? Well, there’s no force-feedback, there still aren’t any hydraulic rams to create the sensation of lateral and longitudinal g-forces and, most importantly, it’s kinda hard to get a real car into the average living room (though not necessarily impossible). But how can you not love the notion of getting your sisu on in your own car without risking putting so much as a scratch on it? And at the end of the day, this Scirocco can apparently be unplugged and driven around like a normal car. So in addition to being one of the sickest gaming peripherals on earth, it’s also one of the most practical. Surely you can use that to sell your significant other on it…