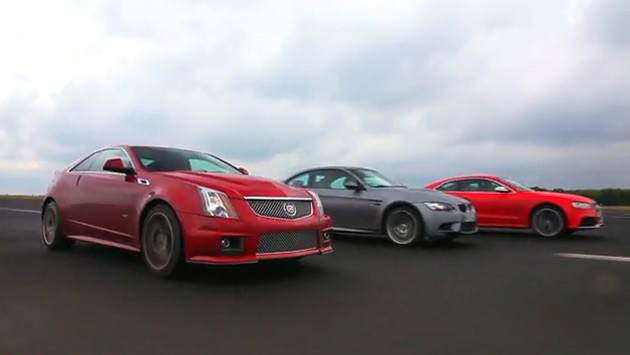 If you had to pick one American car introduced in the last 36 months that is truly impressive and within spitting distance of the world’s best, you could do much worse than the second generation Cadillac CTS-V. It’s definitely raised the sport sedan bar, and GM is hoping the new coupe version will do the same in the premium high-performance two-door segment. But how will we know how this flashy fastback stacks up against two of its biggest rivals from Germany, the BMW M3 and Audi RS5?

That’s where well-established enthusiast publications Motor Trend and Car and Driver come into play. Contrary to popular belief, they are quite aware of the existence of the Internet and the additional capabilities it offers over ultrathin wafers of pureed trees. How do we know this? By the two nicely-put-together HD videos after the jump, of course.

As you can see, Motor Trend takes the analytical approach, with the mag’s editor-in-chief Angus MacKenzie driving these super coupes back-to-back-to-back on some gorgeous Bavarian backroads and weighing in on their respective strengths and weaknesses before finally determining a finishing order. Which one came out on top? You’ll have to watch the video, Sunshine!

Car and Driver, by contrast, ditches subjective analysis, facts and figures, and almost all dialogue for a 70 second homage to hoonage, both on a runway and on the Autobahn. It doesn’t exactly help you much if you’re in the market for one of these cars, but all those barking exhausts and shrieking tires make for quite the soundtrack. MotorWeek it is not.

The hyper observant among you will notice that both periodicals used the same CTS-V Coupe for their tests. That makes sense, since you can probably swing a dead cat (or whale, for that matter) in Europe without hitting any Cadillacs, nevermind the company’s newest model. Will the CTS-V Coupe change that? If nothing else, it’ll give the luxury sport coupe makers on that side of the Atlantic (Audi and BMW among them) a few sleepless nights.