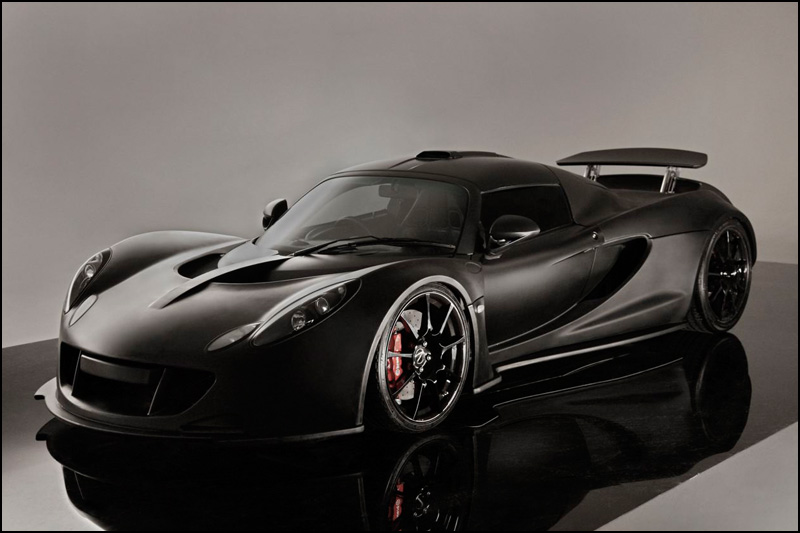 In case you’ve been living with bears and/or the Amish for the past three years, Texas-based tuner John Hennessey and company have been working on bringing out their own bespoke supercar, the Venom GT. Since the project was first announced, we’ve learned that it will be based on a stretched, widened and altogether butched-up Lotus Exige platform, be powered by one of three grades of hopped-up LS9 (read: Corvette ZR1) 6.2L V8 from which buyers will be able to choose, and will have a target base price of around $600,000. Performance figures? You should probably be sitting down for those.

Okay, now that you’ve pulled up a chair, here’s the skinny: The “base” version will use the 725hp HPE-massaged LS9 seen in the HPE700 Camaro. There will also be a pair of twin-turbo versions, one with 1,000hp and one with 1,200hp (the latter will only work on racing gas). Factor in the target curb weight of 2,400 lb, and your middle school math teacher will tell you that, in the case of the top gun version, each horsepower will only have to schlep around 2 lb. It should come as no surprise, then, that 0-60 times are expected to be comfortably below 3 seconds and terminal velocity in the neighborhood of 270 mph. Gad. Bleeping. Zooks.

And considering the chassis is sourced from England, it should come as no surprise that the Venom GT is undergoing testing over there. HPE recently released the above video showing it tooling around the roads around Silverstone, which is where the Venom GT will be assembled. (The engines will be shipped from HPE’s home base in Texas.) It certainly sounds healthy, and it looks eye-wateringly quick even when launched at what appears to be six- or seven-tenths; anything more vigorous might draw the wrong kind of attention from the rozzers.

Speaking of attention, the Venom GT is sure to draw quite a bit of it when it makes its formal debut later this year, likely at the Pebble Beach Concours d’Elegance in August. Of course, is it possible for a car packing Veyron-stomping numbers at about half the price to not cause a ruckus?