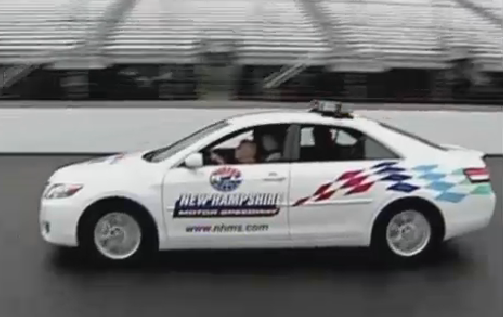 Everyone has a wish for their birthday, but if you’re 100 years old, you should get your wish granted, no matter what. A woman in New Hampshire had her wish granted recently as she wanted to turn some laps on a NASCAR track, and there just happens to be one: New Hampshire Motor Speedway, a track that is just over a mile long and doesn’t have much banking.

Rachel Gilbert, who has been a fan of racing for over 50 years of her life, was allowed to get on the track in Loudon for her 100th birthday, and while she did her best to try and reach 100 miles per hour, she could only reach 53 miles per hour, which is likely the best for everyone involved, although we’re pretty sure she won’t be favored by NASCAR odds anytime soon.

Gilbert hasn’t had a license since 1995, so this was obviously a special thing that she wanted to do, but not only that, Gilbert was given a birthday card and signed jacket by her favorite NASCAR driver, Carl Edwards, and she’ll likely be at the Lenox Industrial 301 in July. Edwards could dedicate the race to her as he tries to win at New Hampshire for the first time. There is no word if she tried to do a backflip when exiting the car, Edwards’ signature move.

This is an excellent idea that more tracks should do, and New Hampshire will obviously get a lot of positive PR for this move. They need it as New Hampshire is known as one of the most boring tracks on the Sprint Cup circuit because it doesn’t have high banks and it isn’t that fast, but maybe they have found another way to make a buck at the track.

Source: The Daily What