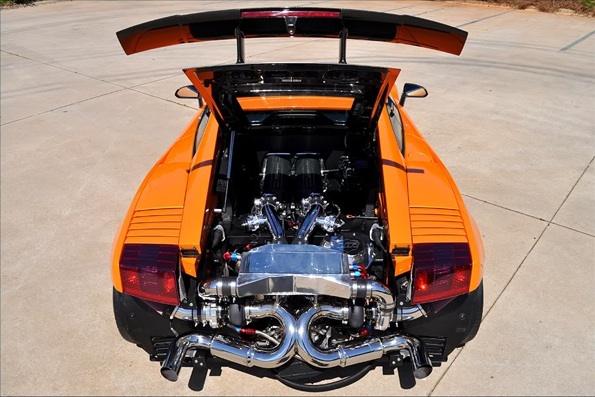 2000WHP Lamborghini Gallardo Superleggera. What’s wrong with that phrase? 10 years ago putting those words together would have made the collective automotive world say, “What!?” so loud aliens would have heard it, but that was before YouTube, Streetfire and the like where now we just go, “Ok, yeah, that makes sense.” 2000WHP in a car that weighs as much as a pair of shoes does not make sense. It’s awesome, incredible and probably really really fun but it’s also totally insane. The new Veyron Supersports, the fastest production car on the planet, has 1200hp at the crank. It also weighs about 1000lbs more than the Gallardo, and it was built specifically for VMax. The Superleggera, as exotic and fast as it is, was not made to go 250+mph.

In April, Richard Holt’s TT Gallardo, built by the talented guys at Underground Racing, went 250mph at the Texas Mile. Rather than pat himself on the back and lock himself safely indoors for the rest of his life, Holt asked for more power, and then went back out on there. What followed falls second only to Richard Hammond’s crash in “Things that Make You Say; I wish I’d stayed home.” After passing the speed traps at 235mph, Holt pulled the drag chute and oddly enough, that’s when things went wrong.

Some say there was a cross-wind, some say the chute itself yanked the car off course. Either way the Lambo went into the dirt at over 200mph, sending the car flipping multiple times end over end like an 8 year old Chinese gymnast. Thank god the car had a 6-point roll cage and harness, because the driver walked away. Let this be a lesson to everyone out there that has become jaded by today’s exploding chase for after-market horsepower; if you have several thousand horsepower, make sure you have the equivalent in safety gear. Personally I’d want one of those foam injection systems from Demolition Man.