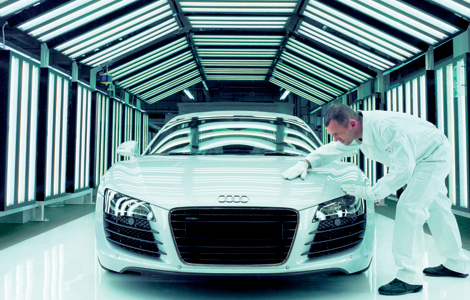 Ultimate Factories on the National Geographic Channel is back, once again delivering an in-depth look at what goes into the production of some of the world’s top automobiles. Along the journey, we’ve been taken inside factories producing the Rolls-Royce Phantom, Chevy Corvette, Chevy Camaro SS, Porsche 911 and the Lamborghini Murcielago. The next show features Audi and the production of their flagship R8 supercar. Be sure to tune in on Monday, April 26th, at 10PM ET/PT. Check out the video highlights and show details after the jump.

Our cameras go inside the Audi R8 factory in Neckarsulm, Germany and follow the crafting of a road car modeled after a champion racecar. With the introduction of the R8, Audi breaks out of its elegant sedan image to create a sportscar that rivals the likes of Porsche and Lamborghini. Modeled after the R8 racecar that dominated at LeMans, the Audi R8 road car is a mid-engine two-seater with explosive power and a smooth ride. Audi has combined all of its engineering innovations over the last few decades into this one sportscarall wheel drive, an ultra-light aluminum spaceframe and high-tech fuel injection. Since its launch in 2007, the super sleek R8 has appeared in many films and TV shows, including: Iron Man, Transformers, Dirty Sexy Money, CSI: Miami, Chuck, and 17 Again. This car is grabbing the attention of sports car fanatics, photographers and automotive journalists all over the world.

Audi bring a road version if its race car to the people.