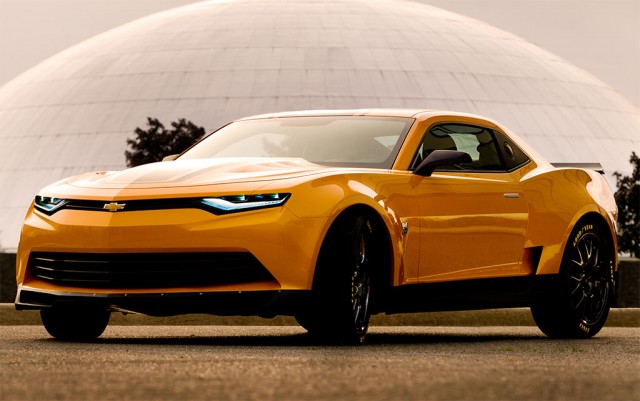 Say what you will about A-list director Michael Bay’s attitude toward filmmaking (or women, or knowing when to say when with regard to pyrotechnics, or self-deprecating humor, or…), but the bottom line is the man knows how to make the Hollywood studios a metric butt-ton of money. This has especially been the case with the Transformers series of live-action action(?) films. The first three have grossed more than $2.6 billion worldwide, so it’s no surprise a fourth one is on the way in just under a year from now (June 27, 2014 to be exact).

As with the first trio of flicks, General Motors is footing the bill to have its products cast as a sizable chunk of the Autobot posse. And once again, much to the dismay of Transformers purists and Volkswagen enthusiasts alike, the Autobot who goes by Bumblebee is going to take the form of a Chevrolet Camaro when in car mode. But when it comes to the Chevy pony car playing Bumblebee, there’s *ahem* more than meets the eye. 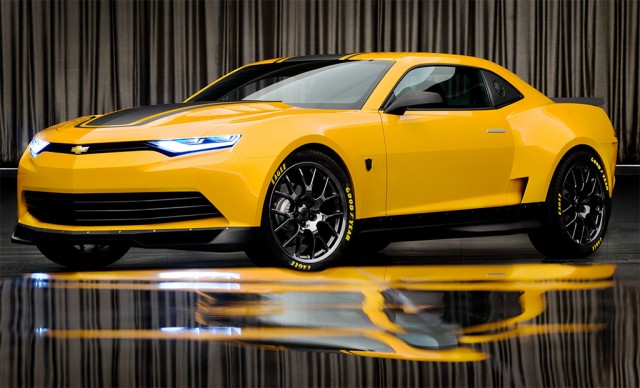 For starters, Bumblebee will spend at least part of Transformers 4 as a 1967 Camaro SS, marking the first time that the series’ non-human protagonist will be played by a first-gen Camaro. But that’s not the big news regarding Bumblebee; no, that honor is reserved for his other Camaro alter ego, the curious concept car seen here.

The aggressively flared fenders and airy Z/28-style wheels wearing racing style yellow-lettered Goodyears certainly stand out, but not nearly as much as this muscle car’s curious new front end styling. The narrow mail-slot of a grille is a big departure from even the 2014 production Camaro, as are the only-slightly-thicker LED headlamps that surround it. And because the traditional grille area is so tiny, the lower intake on the front fascia is quite large. We want to like it (really, we do), but all we can think of when we see it is the face of Bender from Futurama.

However, we may have to get used to that Groening-esque visage for the Mustang’s arch foe: The sixth generation Camaro – a smaller, lighter car that will use the Alpha platform found beneath the Cadillac ATS and upcoming Gen 3 CTS – is likely to arrive for the 2016 (or maybe 2017) model year and, if we had to guess, we’d say this movie car might be testing the waters of public opinion with regard to the next Camaro’s styling. Maybe we’re reading too much into this, but the timing would make for one hell of a coincidence.