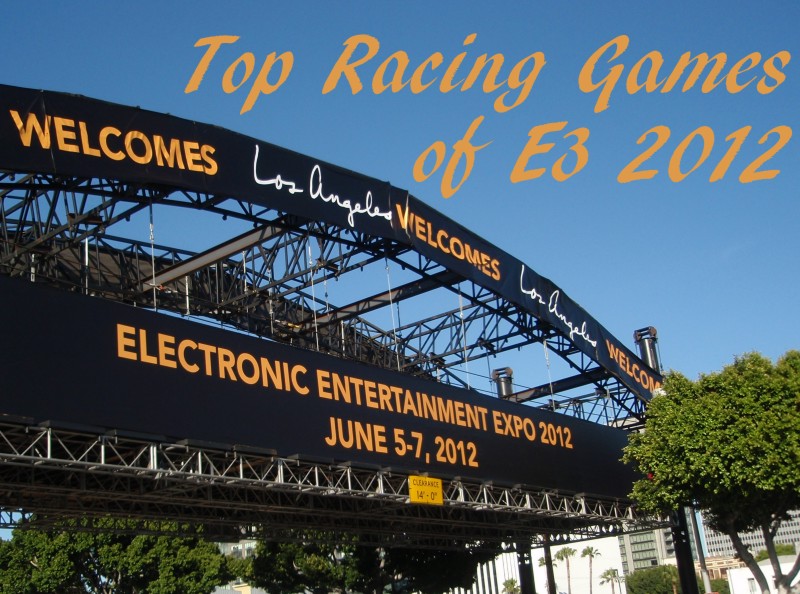 The 2012 edition of the Electronic Entertainment Expo (E3 for short) wrapped up at the Los Angeles Convention Center yesterday, and there was plenty of monumental video game news being announced. There were numerous sequels to beloved adventure, first-person shooter and sports games, as well as some intriguing new properties like Watch Dogs, ZombiU and The Last of Us. There were also new services announced, such as Microsoft’s SmartGlass, which will allow smartphones and tablets to interface with the Xbox 360.

Of course, there were also many new racing games that had their coming out parties at E3. And because racing games are the ones we cover most closely, they’ll be the only genre you’ll see highlighted here. You want info and insight on the likes of Assassin’s Creed III or Gears of War: Judgment? There are umpteen hundred other outlets that will give you that. Anyway, on with the games that will get your motor running.

Arguably the subject of the most buzz and speculation ahead of E3, is Forza Horizon. Wait a minute, didn’t Forza Motorsport 4 just come out last fall? Well, yeah, but Forza Horizon isn’t a sequel in the truest sense of the word. The whole game is set in rural Colorado, and there are hundreds of miles of open roads with traffic on them to race on and explore. If that sounds like a Rocky Mountain Test Drive Unlimited, it kinda is. But here’s the difference: Per a conversation we had with Turn 10 Studios head Alan Hartman, Forza Horizon runs on the Forza 4 physics engine, meaning the vehicles behave and respond far more realistically than do the ones in most open-world racing titles.

However, the physics engine has been tweaked to accommodate dirt, gravel and dozens of other surfaces (more than 60 in all). Plus, time-of-day changes have been added to the already stunning, lifelike graphics, and the extensive vehicle customization options you know and love are present, as well. The wait until October 23 – the day Forza Horizon is scheduled to hit stores – will be nothing short of excruciating.

Need for Speed: Most Wanted

Need some more déjà vu in your life? Check out Need for Speed: Most Wanted. Yes, there was a game by that very same name released in 2005, but this new one is being developed by Criterion Games, the same studio behind 2010’s Need for Speed: Hot Pursuit and the Burnout series. The premise is much the same as the original Most Wanted: Reach the top of the Blacklist by becoming the fastest, most destructive and hardest-to-catch street racer in town. You do this with a variety of high performance cars (and, in the case of the Ford SVT Raptor, trucks) and beating your opponents in races, speed traps, jumps and other challenges, as well as escaping the po-po and knocking cars (both opponents and police) out of your way.

Excitement? Loads of it. Look for it on retailer shelves this October 30.

LittleBigPlanet, the cute, whimsical PlayStation3 exclusive game that lets players create and share their own games, has been a massive hit, so much so that it inspired a sequel that has also been a massive hit. Now the franchise is adding a dedicated karting game called – Surprise! – LittleBigPlanet Karting. As with the other games, Media Molecule is one of the developers, and the level of customization is mind-boggling. The demos at E3 featured a race around what looked like a beach track, and a battle arena set on boat floating in the air. All the classic karting game tropes are present, including speed boost pads and zany power-ups. But it’s all customizable. How cool is that?

Speaking of karting games, Sega used E3 to announce a new racing game starring Sonic the Hedgehog and a cornucopia of other stars from the company’s most popular game franchises. But this isn’t just any karting game; as the name implies, both the tracks and the karts transform. For example, the first track we sampled was a typical on-the-ground circuit on the first lap. On the second lap, part of the track dropped away, dumping racers into a river, and the karts automatically transformed into boats and hovercrafts. On the third lap, another part of the road was destroyed, launching us skyward as our kart sprouted wings and a propeller. The water, lava and air sections require vastly different techniques, presenting players with new challenges. Throw in the genre de rigueur weapons and power-ups and you have a wild, thrill-a-minute experience.

Finally, at the opposite end of the realism spectrum, we find F1 2012, the third Formula 1 game produced by Codemasters. As before, all the current F1 teams and tracks will be included, the latter group featuring the Circuit of the Americas currently under construction in Austin, Texas. COTA was also the track running on the floor demo, and we have to say that, after attacking it in Lewis Hamilton’s McLaren in a solo practice session, this November’s U.S. Grand Prix should be a barn-burner.

As for the game, the level of detail is tremendous, as players have both KERS and DRS at their disposal to improve lap times and pass opponents. New for this installment of the franchise is the Young Driver Test that begins career mode. It will allow new players to familiarize themselves with the insane abilities of a 2012 Formula 1 car, plus it will allow the player to develop relationships with top drawer teams like Ferrari, McLaren and Red Bull that could help him or her get a ride in later seasons. Very cool.