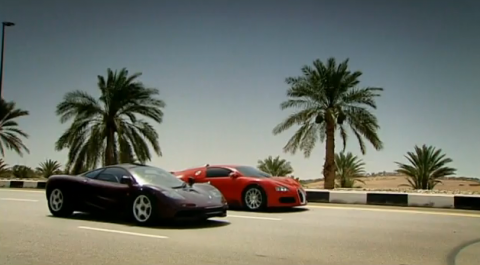 Fresh off the excitement from the first episode of Top Gear Season 13, when Schumacher was revealed as The Stig, Episode 2 had its own fair share of fireworks. The highlight was when Richard Hammond took the wheel of a Bugatti Veyron and raced against The Stig pushing a McLaren F1. Both of these rare supercars were run full-out down a 1 mile stretch. So, where might you find two of the rarest cars in the world, no less together on the same road? Well, Abu Dhabi of course. Check out the video after the jump: