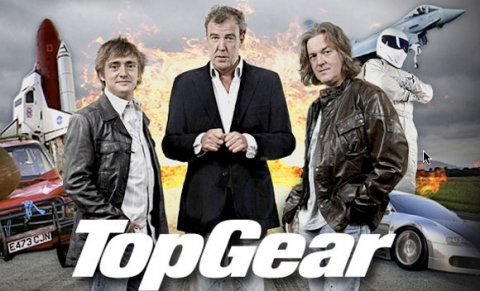 By now, almost all auto enthusiasts have either heard about or have seen episodes of Top Gear, the Emmy Award-winning TV show from the BBC that takes various cars and other motorized vehicles and does crazy and amazing things with them. Hosts Jeremy Clarkson, James May, Richard Hammong and the mysterious test driver, Stig (who you may have seen appear on many of the promotional images with the ominous helmet) keep things both interesting and entertaining. Even people who are not very into cars still seem to find the show engaging.

>>Read below for details about the promotion>>

Believe it or not, Top Gear originally started broadcasting in 1977 and has had many ups and downs since then. However, starting in 2002, after almost being cancelled in 2001, the show has a great new format and has been on an absolute tear. What’s the reason behind its success? Crazy stunts like having snipers shoot at an evading Porsche Boxster S and Mercedes SLK55 AMG, driving a Land Rover Discovery to the top of a mountain, comparing video game lap times to real life, pitting amphibious cars against one another, racing a Nissan GT-R against a Japanese bullet train, and on and on…

Now, for the first time available on DVD, Season 10 (starting from 2002 if you are wondering about the math) has been released with all of its wonder and pure viewing enjoyment. As a bonus to our readers we are offering copies of the 3-disc DVD set in a special promotion. The top 2 responses posted in the comments section of this article that best answer the following question will receive Top Gear Season 10 on DVD: What do you think would be the coolest Top Gear race challenge for a future show? To get your creative juices flowing, check out this highlight from Season 10 where a Bugatti Veyron races against a European fighter jet. Please read the official rules.