Top Gear Reveals the Identity of THE STIG (VIDEO) 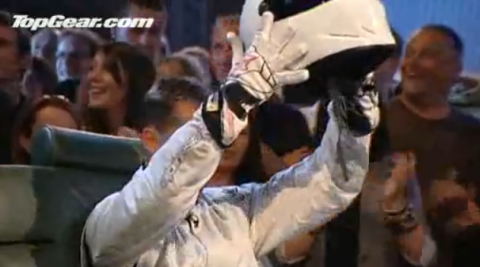 Finally, at long last The Stig from the BBC hit show Top Gear has been revealed (or at least one of several Stigs). For those not up on the show, The Stig is a mysterious race car driver who posts lap times at the Top Gear Test Track in Dunsfold Park for the purpose of comparing high-performance cars. Actually, over the years there have been many Stigs including The Black Stig (the original who wore black overalls and a black helmet) who was killed off after the second season, the current White Stig (white overalls and white helmet) who has performed the majority of driving duties since then and various guest Stigs such as Big Stig (in America), Rig Stig (the lorry driver) and the ‘Stig’s Communist cousin’ (red jumpsuit motorcyclist).

Since day one, host Jeremy Clarkson’s spiel on The Stig is that “we don’t know its name, we really don’t know its name, nobody knows its name, and we don’t wanna know, cause it’s a racing driver.” Top Gear is now on Season 13 and the true identity of The Stig was revealed at the conclusion of the first episode on June 21st. He is none other than Formula One racing legend Michael Schumacher. This bombshell was dropped after The Stig (who at the time was unknown) set the Power Lap record time (1 min 10.7 seconds) in Schumacher’s Ferrari FXX at the Top Gear Test Track. But after the seven-time F1 world champion removed his helmet, he performed a sly wink that added some doubt as to whether or not he was, in fact, The Stig.

And, the fact that Schumacher was credited as a guest star separate from the Stig’s presenter credit was highly suspicious. So, only time will tell… Back in January of this year, there were media reports that the The Stig was Ben Collins, a stunt driver for the James Bond film Quantum of Solace. We may never know the whole story based on the crazy antics of Clarkson and crew but you can bet that there are several Stigs. And in the coming weeks, months and years more will surely emerge!