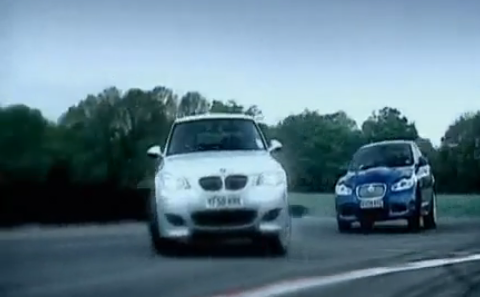 The BMW M5 has been a favorite of the folks at Top Gear for quite some time and sits atop its list of Sports Sedans like a mighty king on its thrown. Now, some other camps are getting ready to storm the castle, most notably the Jaguar XFR, with its new 510 hp V8 engine and 461 lb-ft of available torque. Top Gear has taken notice and wanted to see if the BMW M5 was still best in its class for both track driving as well as city roads.

Jeremy Clarkson beautifully manhandles the Jaguar XFR by maxxing out the top end and then putting the car through drifts, burnouts and whipping it around like a madman. Not something you typically see someone do with a luxury sedan, let alone a Jaguar. In any case, Clarkson couldn’t speak highly enough about the Leaping Cat’s new offering as he gushed about the ride quality and amazing power on hand. But no comparison would be truly complete without putting both the BMW M5 and Jaguar XFR side by side on the track. Check out the full video after the jump.