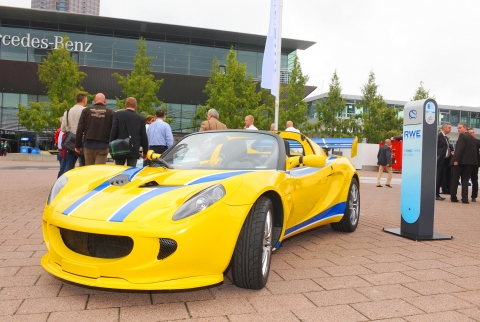 Every year more and more automotive companies jump on board with the green movement.  Many hem and haw but eventually come around as there seems to be sufficient consumer interest to at least take a few baby steps forward. If nothing else, it helps with public image even if the economics still don’t make sense. But what started out as an anomaly in the modern age has turned into a full blown onslaught of environmentally friendly vehicles, some particularly high-performance like the Tesla Roadster and the the Fisker Karma.

The technologies in the marketplace span the gamut from flex-fuel and hybrid-diesel engines to the new holy grail, battery powered electric vehicles with decent range and the ability to plug into any 110/220 outlet. This year marks the first Frankfurt Motor Show taking place in the age of the electrical auto revolution and all of the manufacturers have something to contribute to the cause. In all, there were over 50 electric and hybrid cars in the haus (get it?).

Of course, electric vehicles are nothing new, first appearing in practical, usable form in the mid-1800s. In America, around 1899 and 1900, electric cars outsold all other types of cars. However, by 1912, with the advent of the internal combustion engine, the cost of gasoline powered cars was much cheaper and sales of electric cars tapered off to nil.

Even though there is tremendous interest in electric powered vehicles now, they still represent just a fraction of automotive sales. As for Frankfurt, many of the cool vehicle concepts that are being displayed are still just vaporware. The majority are concepts that will never make it to production. That said, the bar has definitely been raised and this is shaping up to be a high-tech chess match of competing engineering visions.

In the short term, we probably won’t see too many auto companies going out on a limb with pure electric cars, but everyone will probably have some sort of alternative energy model in their lineup. The viability of full-on mass market electric vehicles probably won’t surface until the next decade. The challenge is that storage capacity needs to increase three-fold from today’s batteries to be truly feasible. But for now, it doesn’t hurt to dream big and the Frankfurt Motor Show is serving as the best backdrop to date of green vehicles. Here is our rundown of our favorite electric car concepts from the event: 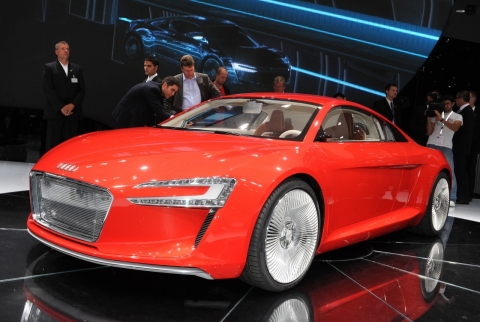 This was one of the biggest surprises of the show. After much speculation in the European press concerning an electric version of the R8 Coupe back in May, Audi quickly dismissed these stories as simply untrue. And yet here we have the Audi e-Tron, a fantastic new concept which features four individual electric motors at each wheel that pump out a combined 313 bhp. That’s pretty impressive, but it’s the 3,319 lb-ft of torque this car produces that makes it truly outstanding. 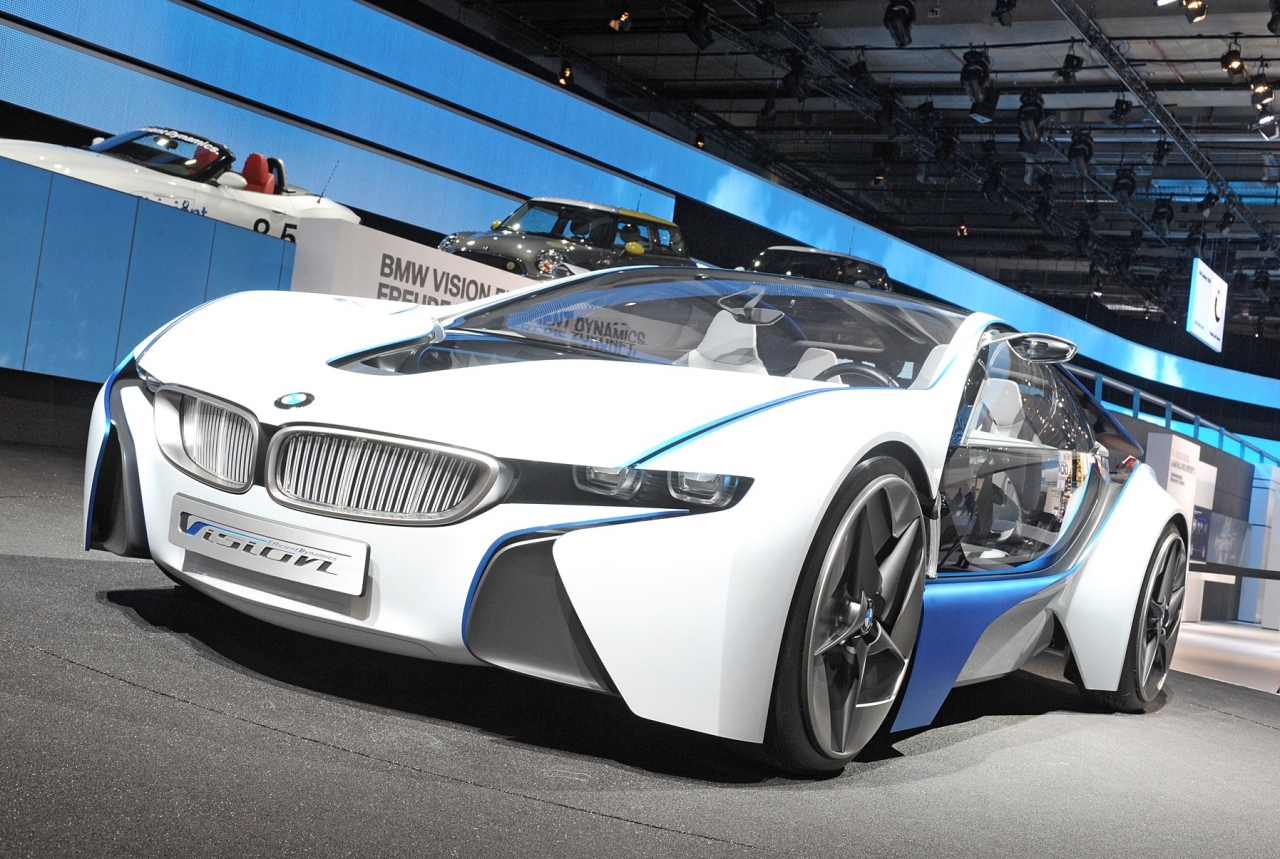 We gave the Audi e-Tron the first spot mainly because we love the R8 in any flavor. But the BMW VisionED concept caught everyone off guard with it’s uber-cool styling and beyond impressive technological advancements. I guess when the company announced it was leaving F1 to develop cleaner and greener cars, we all just said, “Ok, sure.” But with their delivery of a slick 356-horsepower all-wheel-drive plug-in we’re all on board with the new direction. The Vision EfficientDynamic Concept has a 1.5-litre 3-cylinder turbodiesel motor rated at 163 hp along with two electric motors – one dedicated to the front axle and one for the rear. While we like the environment-friendly emissions of only 99 grams of CO2 per kilometer, we dig the performance specs even better – it can hit 62 mph in just 4.8 seconds. 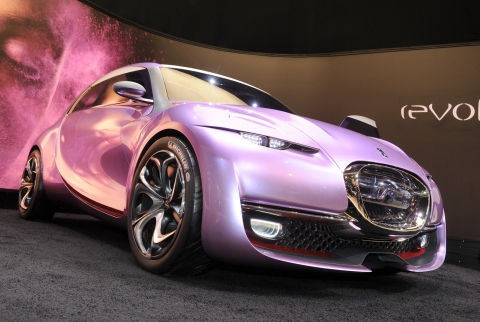 French automaker Citroen is introducing a compact city car concept featuring a gas-electric hybrid engine that’s rechargeable and super funky. The Citroen REVOLTe sports rear-hinged doors which lead into a multicolor interior with luxury styling. Materials include woven black leather, crimson velvet and aluminum. The passenger area has a meridian sofa that wraps around to include the copilot. We applaud the REVOLTe’s ultra cool urban aesthetic and its ability to run in all-electric ZEV (Zero Emission Vehicle) mode. 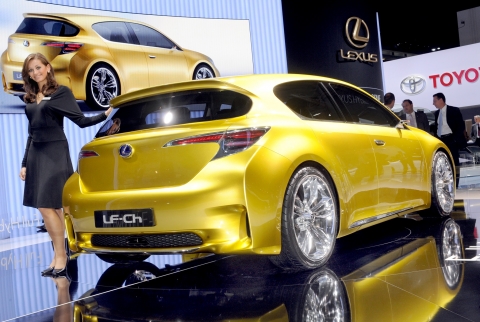 In order to rival the Audi A3 and BMW 1-Series, Lexus is working towards the release of a premium hatchback. The Lexus LF-Ch Hybrid Concept is their first step towards making this a reality. It’s likely that production versions would be available in both hybrid and conventional drive-trains. Lexus claims the hybrid option will allow the car to be driven in a fully electric EV mode. The LF-Ch Concept features shaved door handles and some complex body styling which will probably get significantly altered for an actual release. The production version of the Lexus LF-Ch most likely drops in 2012. 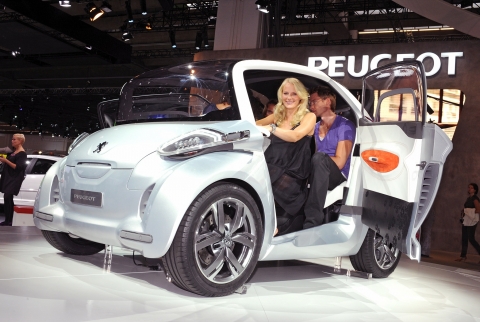 French automaker Peugeot unveiled the most far-out and progressive design at the show. The BB1 Concept is a “full electric vehicle that reinvents the automobile in every way: architecture, style, interior design, design, connectivity – while all the time respecting the environment.” The BB1 is pretty tiny but can still hold 4 passengers seated in tandem. An electric motor situated inside the rear wheels delivers 20 hp. Acceleration from 0 to 30 kph takes 2.8 seconds while pushing from 30-60 kph takes 4 seconds. The driver uses handlebars like a motorcycle, rather than pedals for control. This Concept is pretty rad (did I just say that?) but the 75 mile limit of the batteries make it a little less sexy. 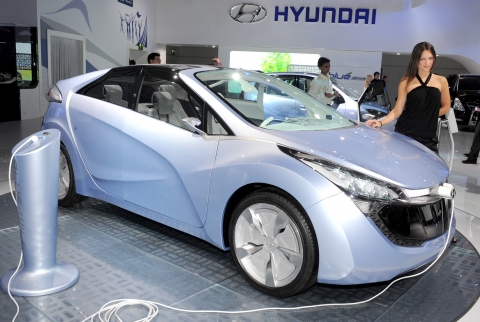 Blue is the new green, right? Or at least it is for color choices of environmentally friendly vehicles. We first saw the Hyundai Blue-Will concept in Seoul and were impressed. The car features a touch-screen for drive selection and a continuously variable transmission to operate the 152 hp GDI 1.6L engine working in partnership with a 100 kW motor. This parallel hybrid system is going to be the base for all of Hyundai’s future hybrid models. The Blue-Will is a plug-in (if you didn’t notice all the wires dangling) and keeps the battery pack located under the rear seat. The next-generation Sonata will be our first opportunity to evaluate this drive-train in action. 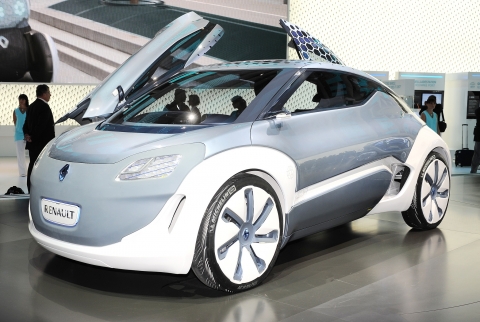 Renault went crazy on us with a gazillion (ok, really just 4) electric cars at Frankfurt this year. The Zoe ZE Concept was the most compelling from their buffet. Powered by a lithium-ion based 70 kW motor, the Zoe is good for 100 miles before recharging. The transmission is direct drive with forward and reverse inverters. The back of the car incorporates a retractable spoiler with LED lighting technology. It deploys at speeds over 90km/h and also serves as a brake light. There is also an integrated light in the shark’s fin-type aerial on the roof. Speaking of the roof, not only does it have special insulation from the heat or cold but it also recovers energy via its honeycomb photovoltaic cells. The front doors are scissor-type while the rear are butterfly-style. To shake things up even more, the climate control system can deliver a hydrating substance to keep the skin soft. An Active Scent function creates various interior moods using smells and a Detox function extracts harmful substances from the cabin. This was developed with none other than L’Oreal. It is  French after all… This may have been higher in the ranking but stepping out all lubed up and flowery might make me want to throw up. 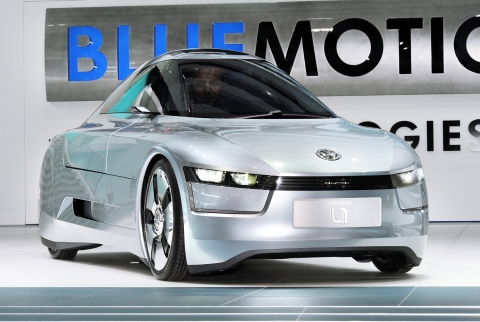 The Volkswagen VW L1 is a 180 mile-per-gallon, tandem two-seater hybrid car that aims to be the most aerodynamic vehicle in the world, along with the lightest at just 840 pounds. It features lots of carbon-fiber coachwork as well as a fighter-jet style cockpit canopy. The VW L1 has a top speed of 99 mph and can hit 62 mph in 14.3 seconds. The 800 cc engine is basically a VW 1.6-liter turbodiesel cut in half. Regenerative braking adds 29 hp along with a 14 hp electric motor provided for small boosts of acceleration. The L1 has its roots in a research project that was kicked off all the way back in 1998, in an effort to use exotic materials, small gas engines and electric motors to significantly reduce fuel consumption. 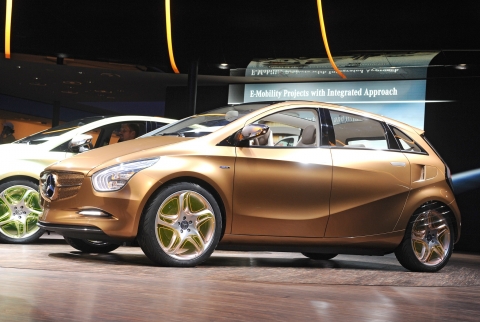 The Mercedes-Benz Concept Blue Zero E-Cell Plus features a 1.0-liter turbocharged three-cylinder petrol engine that produces 50 kW (67 hp) along with an 18 kWh lithium-ion battery. The battery is connected to a compact 100 kW electric motor. This novel combination allows the E-Cell Plus to travel up to 100 km running on electricity alone. When the juice is gone, the gasoline engine kicks in to extend its range an additional 500 km. The car can sprint from 0 to 62 mph in less than 11 seconds and tops out at an electronically limited 93 mph.