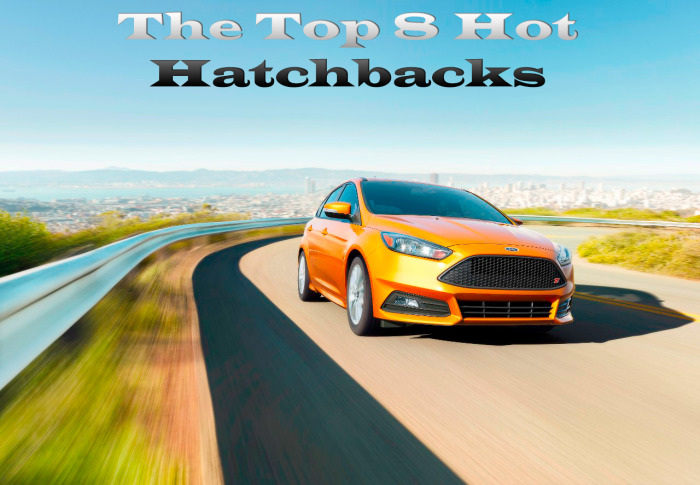 The year is 1975, the city Frankfurt, Germany. Volkswagen has brought their newest performance vehicle to the Frankfurt Motor Show: the 1976 VW Golf GTI. The European hot hatch revolution has begun.

Throughout the 1980s and 90s the European market was inundated with brilliant hot hatches, including the legendary Ford Escort RS Cosworth, Lancia Delta, and the Peugeot 205 GTI. They were practical, fuel efficient, and cheap. They also were quick off the line, sharp through the corners, and all around good fun to drive. And yet they never truly caught on in the states.

Things are changing. Bigger is better is no longer the automotive market mantra. Fuel prices are soaring, cities are crowding, and automotive technology is ever improving. As the effects of global warming become more pronounced, emissions standards have become stricter than ever. Improved fuel economy is a matter of necessity for automakers wishing to stay afloat in an economy still slowly clawing its way out of a deep recession. In the past few years we have seen everything from pickup trucks to pony cars shipping with four cylinder engines. To the budget minded enthusiast, a combination of practicality, efficiency, and fun is starting to look pretty good.

We’ve covered hot hatches before. We did features on tricked out tuners like the Wald International Mercedes-Benz A-Class Black Bison and the HGP Turbo Volkswagen Golf R, looked back fondly on the Volkswagen New Beetle RSi and the bonkers Renault Clio V6, and even road tested newer models like the Fiesta ST, Hyundai Veloster Turbo, and the Golf R. But we’ve never done a full run down of the best hot hatchbacks on sale in the US. Until now. Clickthrough for a run-down of the eight best hot hatches money can buy in the American market today. 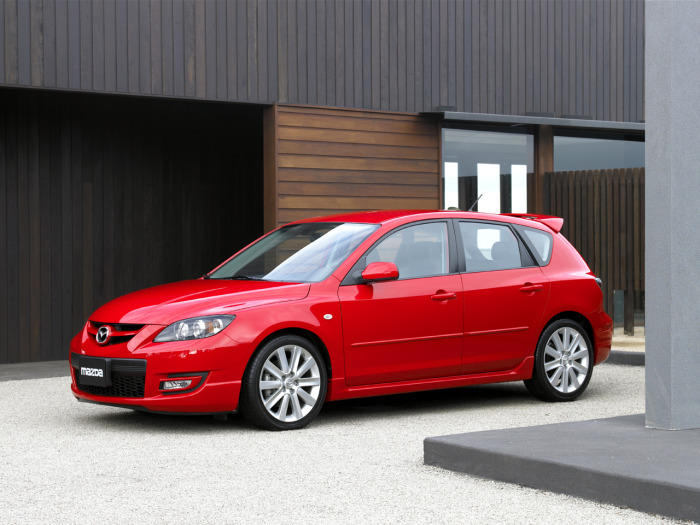 If only we could turn back the clock to yesteryear, Mazda would hold a much higher ranking on this list. While the completely bonkers, murderous rascal with a big goofy smile that was the Mazdaspeed3 is no longer on the market, The Mazda3 should not be counted out as a capable hot hatch in its own right. It’s reliable, practical, has great driving dynamics, and in its S-trim (MSRP: $25,095) it makes 184bhp and 27/37 MPG. Not bad for a car without some sort of suffix appended to its name, shouting “look at me, I’m the fast version!” 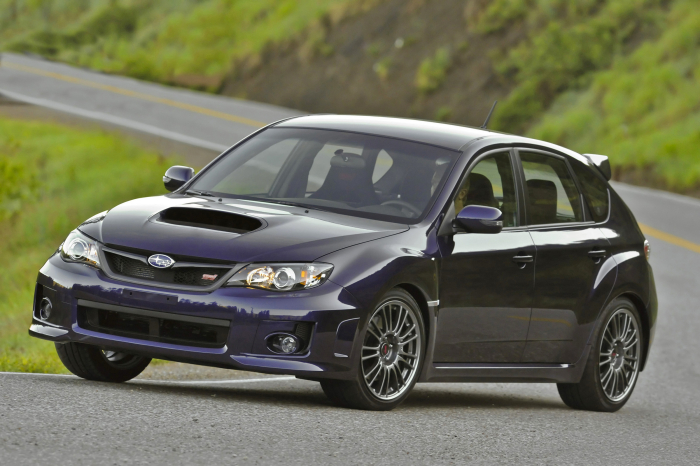 The 2015 Rex is arguably the finest iteration of this ferocious, road-ready rally racer, and yet enthusiasts everywhere shook their heads in disappointment when they learned it would no longer be available as a five door. You can, however, still purchase a brand new 2014 WRX hatch. A base model WRX is reasonably competitive with the rest of the entries on our list, starting at $25,995. The engine makes 265 bhp and 244 lb-ft of torque, but unfortunately only makes 19/25 mpg. Economy being a factor, we can’t reasonably place it higher on the list. If you looked at those power numbers and said “Nah, not enough. I want a hatchback that detonates in a cloud of gravel and testosterone when I touch the accelerator,” you can shell out $36,495 for the STI package. Milage goes down to 17/23 mpg, but with a turbo 2.5L 4 cylinder pumping out a massive 305bhp, rally tuned suspension and handling, and all sorts of go-fast air dams and spoilers, you’re liable to forget about the Subaru-sized hole in your bank account. 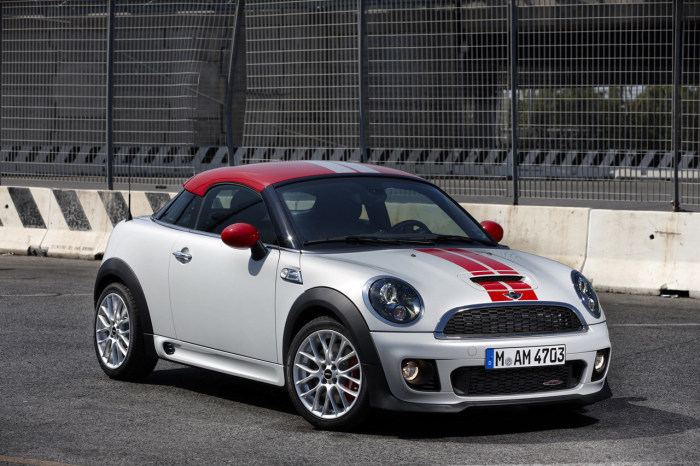 The John Cooper Works coupe is an odd but endearing vehicle. Widely praised for their excellent driving dynamics, Minis can hold their own against the big boys. MSRP is fairly high for our list, starting at $32,050. For the money you get a car built by BMW, 208bhp, 207 lb-ft of torque when overboosted, and 26 city/35 highway mpg. And if you’re desperate for a Mini hatch but the truncated roofline of the coupe doesn’t quite do it for you, Mini also sells roided-up, four-wheel-drive versions of their Paceman and Clubman, as well as the less hot, still fun, and much cheaper hardtop model. 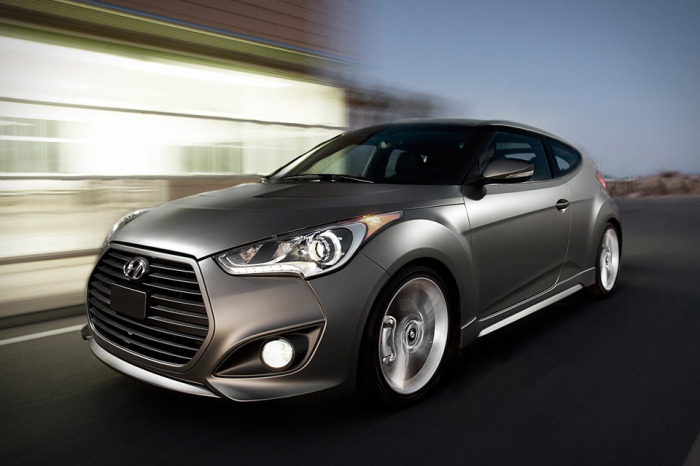 While it may not have the rally pedigree of some of its competitors, there’s no denying the Veloster Turbo is a mean looking machine. Korea is quickly becoming a country to watch for solid, enjoyable economy cars, and this dagger-eyed carnivore is no exception. It’s not quite as quick as the Focus ST or the GTI, but its 201bhp engine with 195 lb-ft of torque will push it to 60 in 7.7 seconds. It’s not too thirsty at 24/33 MPG and here’s the kicker; a base Veloster R-Spec Turbo will only run you $21,300. 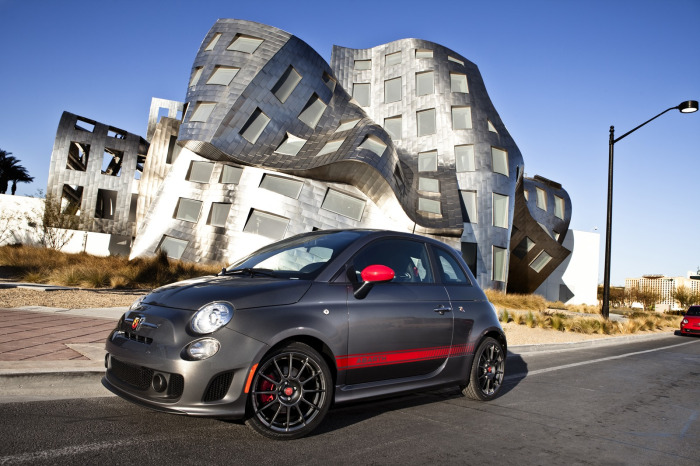 Once Abarth slaps its scorpion badge on the side of a Fiat, you know you’re in for a good time. These are the guys known for permanently locking a car’s engine cover in the open position, because they found out it gave the thing better downforce. This little rocket will do 60 miles per hour in 6.7 seconds. The hard top starts at $22,195, makes 160bhp and 170 lb-ft of torque, and gets 28/34 MPG. And if you’ve got an extra four grand, you can get a cabrio for some open air hooliganism. 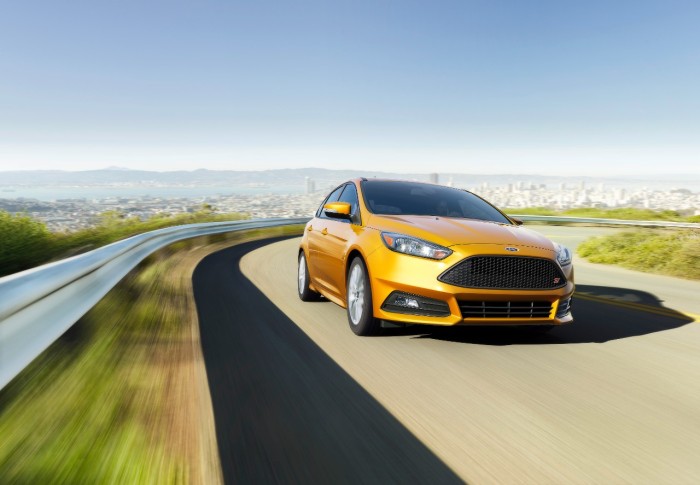 The Focus ST is the growling bulldog to the Fiesta’s cock-eared spaniel. This car seems most at home doing doughnuts in a football stadium blasting hair metal and not wearing any pants. Its EcoBoost 4 makes 252 horses and 270 lb-ft. of torque, plenty of grunt for slinging the thing around. And with a panoply of handling modifications, you won’t end up in a ditch. MSRP starts at 23,625, and fuel economy is a respectable 23/32. 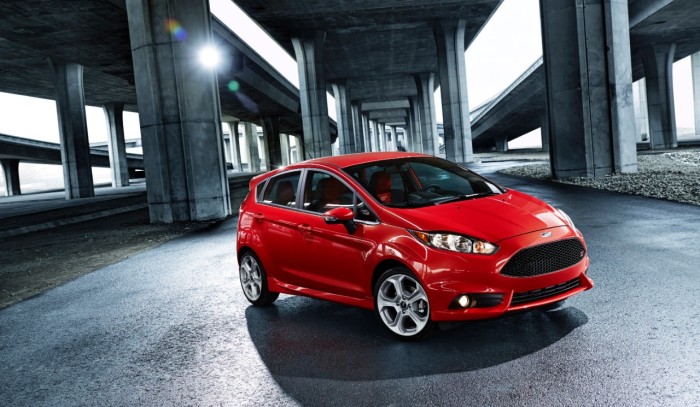 If the Fiesta ST could waggle its tongue out of that impish grin, it would. Economical, practical, small, easy to maintain, and a complete blast to drive, the Fiesta ST is everything a great hatchback should be but so seldom is. Base MSRP is $22,195, it makes 27 city/35 highway MPG, it’s got 197 bhp and it weighs in at 2,700 lbs. If that’s not a recipe for a permanent smile, I don’t know what is. 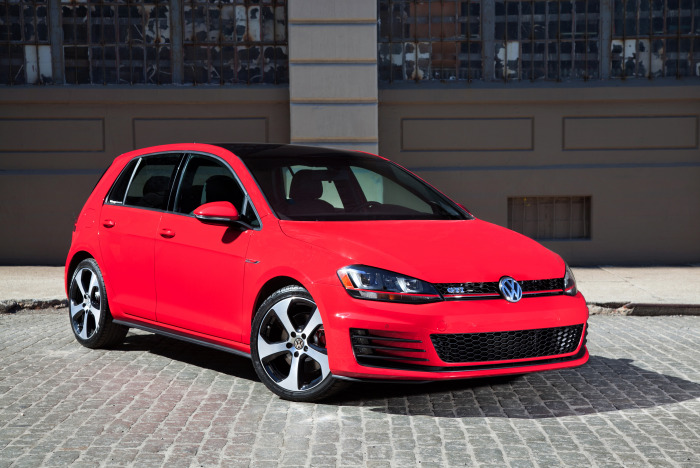 The granddaddy of all hot hatches, the Golf GTI was practically a foregone conclusion for top spot on this list. By all accounts the GTI has matured in its four decades of dominance, and is now more precise, controlled performance vehicle than wild-eyed, tail-wagging mongrel. Though if you find yourself missing a bit of the latter and are feeling flush for cash, consider shelling out an extra ten grand for the significantly more maniacal Golf R. The 2015 GTI will make 210bhp and 258 lb-ft, at a starting MSRP of $25,215. Expect fuel economy to be comparable to the 21 city/31 highway of the outgoing model.

A bit too pricey for this list, with a bare-bones 2013 model starting at $27,270 and spiraling wildly out of control from there, the A3 is nevertheless a hot hatch contender. While the gasoline engine wasn’t supremely exciting, the A3 was also available with a turbodiesel that had loads of torque and made an impressive 30 city/42 highway MPG. Unfortunately, Audi skipped the 2014 model year and will not be offering the 2015 as a hatch.

Bear with us here for a minute. While the CRZ may have the styling of a pod car from some dystopian sci-fi film, and a hybrid system making only 130bhp and 140 lb-ft of torque, it does handle rather well and is a fun daily driver. Short on power though it may be, the CVT version makes an impressive 36/39 MPG and starts at just $20,645. If being economical and looking the part outweighs, well, really all of the other requirements of a hot hatch for you, the CRZ is the way to go.