The United States has, if you haven’t noticed, one of the most voracious appetites for pickup trucks and SUVs on the planet. And because these vehicles tend to fetch hefty profits for their makers, there are many manufacturers competing for sales in the in the various sub-segments of the non-passenger-car arena.

Unfortunately, not all trucks and SUVs offered elsewhere in the world get sent here. Sometimes it’s due to lack of demand (both real and imagined). In other cases, it’s the high costs of modifying such vehicles to meet federal safety and emissions standards, while still others (particularly when pickups and vans are involved) are the fault of the so-called “Chicken Tax.” And of course, individual imports are, for all intents and purposes, out of the question (unless you want to be sneaky and risk The Man mincing your pride and joy for propaganda purposes).

In any case, we’ve compiled a short but sweet (and, frankly, depressing) list of our five favorite pickups and SUVs that can’t be had in the self-proclaimed Land of the Free. And just so you don’t moan about us overlooking the likes of the Mercedes-Benz G65 AMG and Jeep Wrangler diesel, note that we’re excluding forbidden engine variants of vehicles that are sold here. 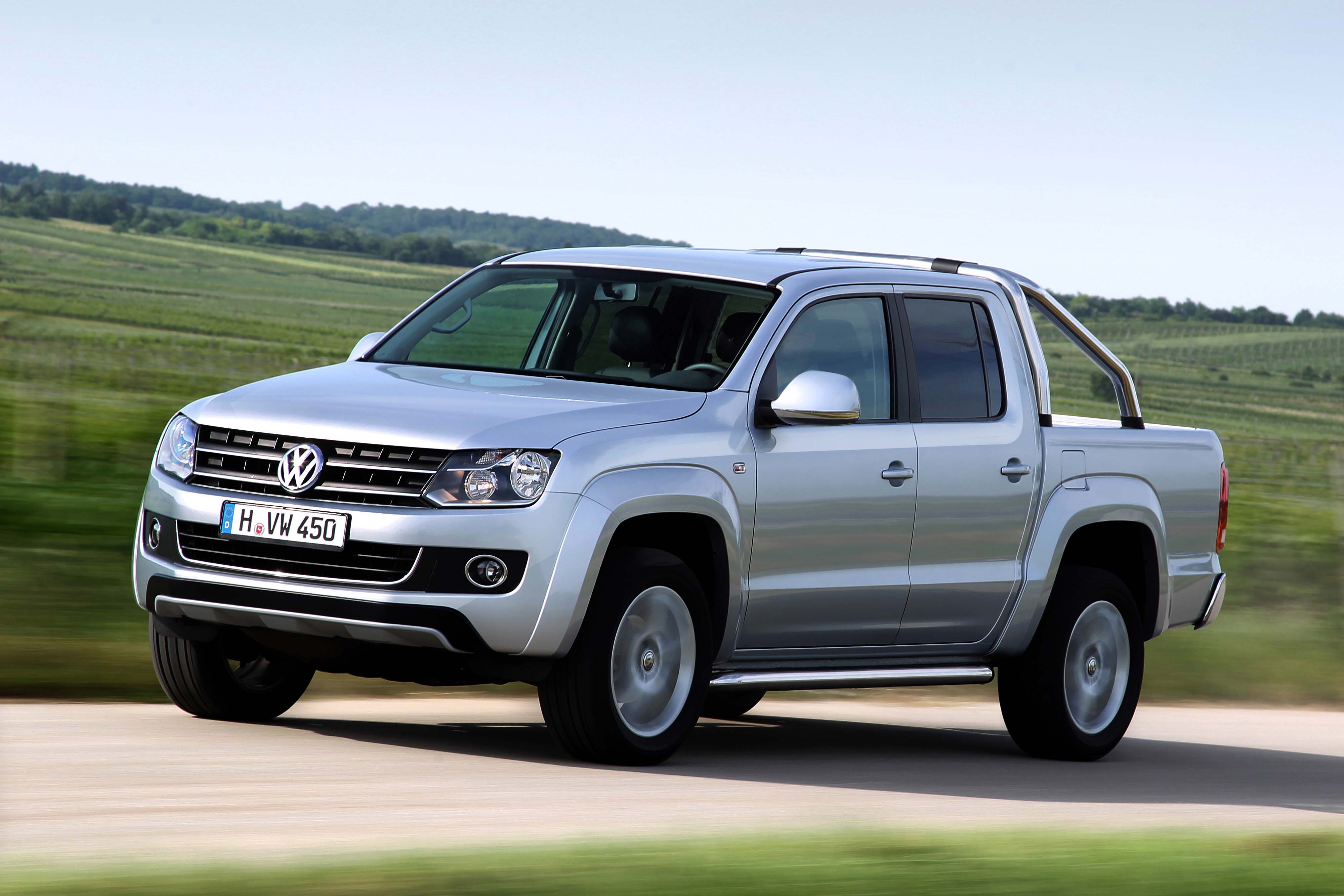 If you were to hear the phrase “Volkswagen pickup,” odds are the first image to pop into your cranium would be that of the Golf/Rabbit Mk. 1 based Caddy. But the Amarok (which is the Inuit word for wolf), is about as car-based as a bass boat is. It is offered in both regular and crew cab configurations and rear- or four-wheel-drive, the beefy, body-on-frame Amarok goes toe-to-toe with the likes of the Toyota Hilux, GM Colorado and Mitsubishi Triton on the South American, European and Australasian pickup truck markets. And strangely enough, it does so with turbocharged 2.0L inline-four engines that are available Stateside: A 158 horsepower gas-burner and a TDI diesel making 138 horsepower. There’s also a 2.0L twin-turbo TDI rated at either 161 or 177 horsepower. Transmission choices are a 6-speed manual or 8-speed automatic, depending on the engine.

Would VW ever bring it here? Well, apparently it has been evaluating the possibility of doing so, but unless and until the aforementioned Chicken Tax is reduced or repealed, we can’t see VeeDub rolling the dice and doing it (unless they start building it at their Chattanooga or Puebla plant). And that’s just whack, Jack. 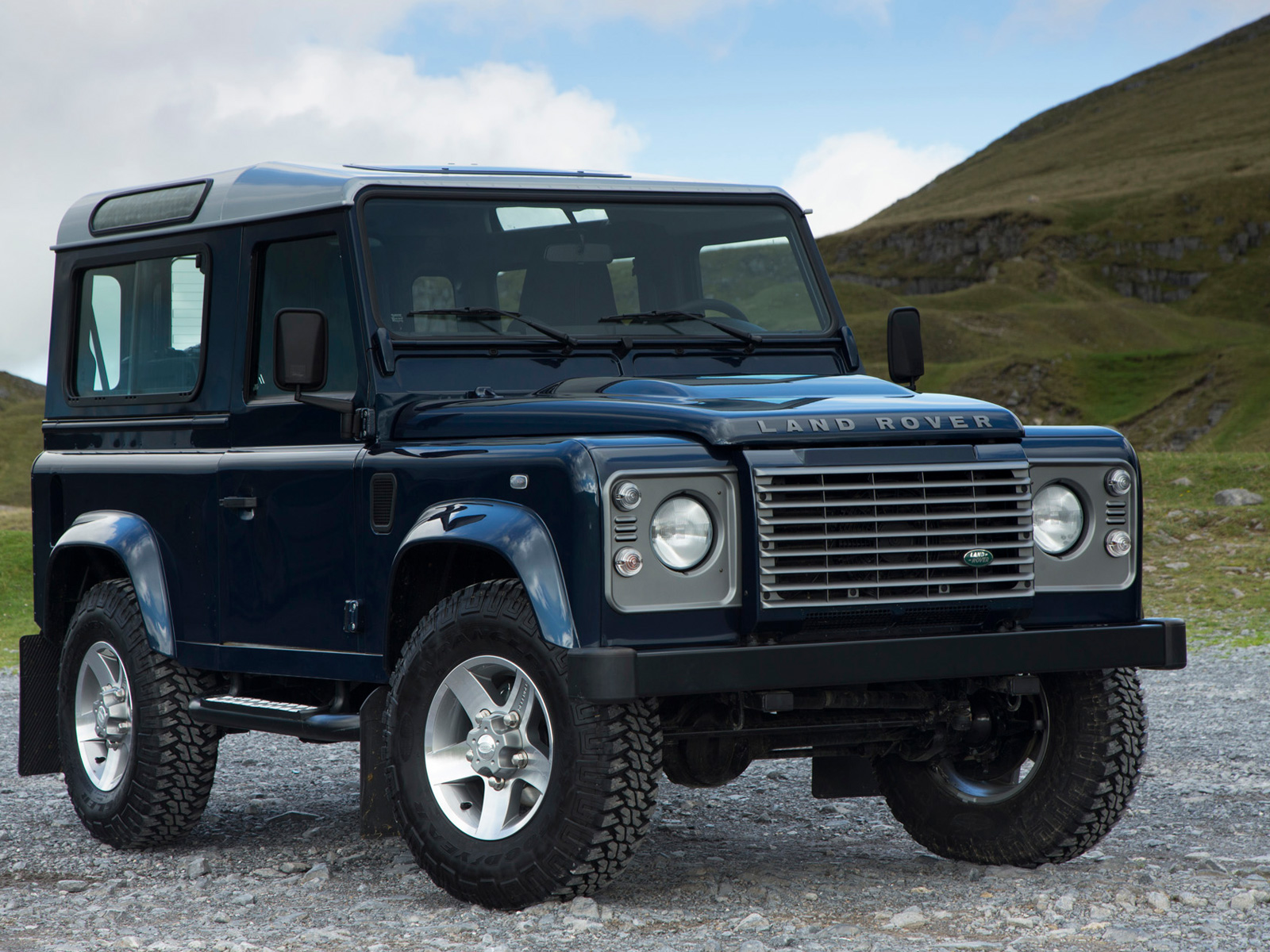 Between 1993 and 1997, Land Rover exported a small number of its box-tastic Defender SUVs (extensively modified to meet Uncle Sam’s demands, of course) to the U.S. Come 1998, new safety regulations came into effect that would have necessitated even more costly revisions. Unsurprisingly, Land Rover said “Eff that noise!” (or something to that effect) and withdrew the Defender from this market.

Since then, the Defender has been treated to multiple tweaks and refinements to its body, chassis and powertrain. As of 2012, the only engine offered is a 2.2L inline-four turbodiesel supplied by the company’s former owner, Ford. As always, the defender is available in oodles of different body styles (including chassis-cab and panel van) on 93”, 110” and 127” wheelbases. However, it won’t be too much longer before the Defender is gone from all markets: Production is scheduled to end on December 20, 2015. A new-from-the-tires-up successor is expected to arrive around that time, but we wouldn’t hold our breath for it to come here, either. 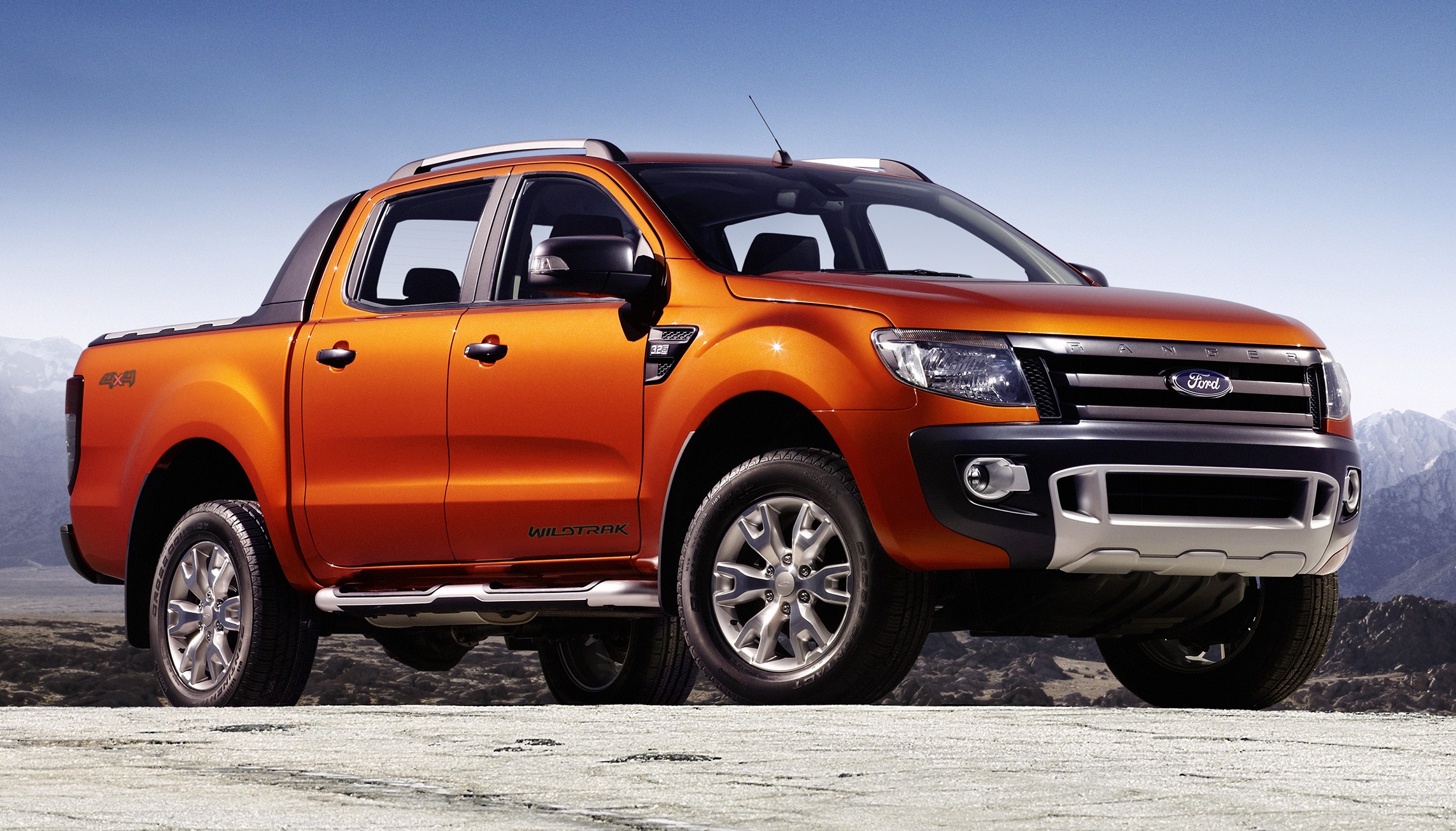 While the new Ford F-150 is certainly chock-full of exciting engineering (a game-changing aluminum body chief among them), it’s still a big-ass pickup truck. That’s fine for a lot of pickup buyers, but what if you don’t need a cab commodious enough for six NBA centers? Or your garage isn’t a former blimp hangar? Well, if that’s the case, Ford U.S.A. has completely and utterly abandoned you, darlin’.

But while the Ford Ranger has been dead in this country since the 2012 model year, the nameplate and fundamental concept live on internationally. Known internally as the T6, the current Ranger features sculpted, car-like styling, a choice of three cab lengths, rear- or four-wheel-drive, and three engines (a 2.5L gas inline-four, a 2.2L turbodiesel inline-four, and a 3.2L turbodiesel inline-five). Dearborn claims one of the reasons it isn’t bringing the new Ranger to the U.S. and Canada is because it’s too close in size to the current F-150, an assertion upon which we call bravo-sierra: With a 127” wheelbase, a 211” overall length and a 73” width, a T6 Ranger Double Cab (i.e. 4-door crew cab) is 17.5”, 21” and 6”, respectively, smaller than a 2014 F-150 SuperCrew with the shorter 5’6” bed. Sure, those measurements don’t seem like much on their own, but when you’re trying to slot your shiny new truck between the Leaning Tower of Pool Toys and Mt. Christmas Decorations, size really does matter. 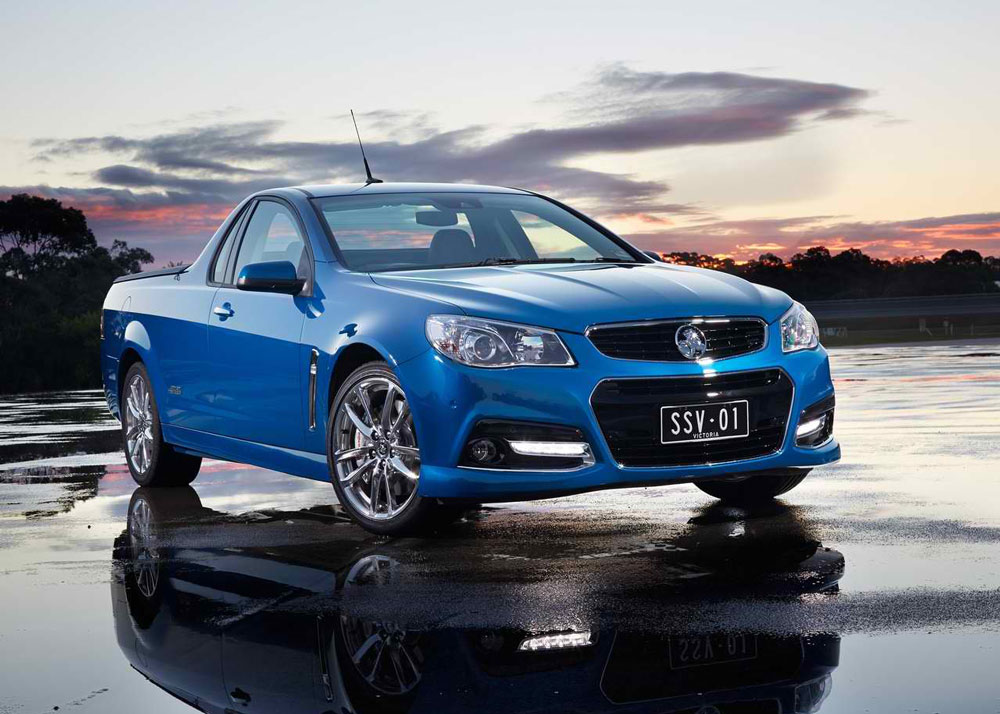 The Chevrolet El Camino may have drawn its last breath in 1988, but GM is still building car-based pickups; the only catch is, they’re doing so in Australia. The latest Holden Ute (short for “coupe utility”) is based on the brand’s latest Commodore sedan and wagon (chassis code VF), and is offered with the same range of engines: A 3.6L V6 and a 6.0L V8 in two states of tune depending on whether you choose the 6-speed manual or the 6-speed automatic transmission, plus you can step up to the factory-tuned HSV version, the Maloo, which is flung down the road by a 436 horsepower 6.2L LS3 V8. If the face looks somewhat familiar, that’s because the new Chevrolet SS is basically a ‘Muricanized Commodore SS.

So it would appear that bringing the VF Ute here with lefthand drive and “Chevrolet El Camino” badges would be easy-peasy, right? After all, that’s what Pontiac was going to do with the VE Ute before Pontiac was, you know, taken behind the barn and given a skull-full o’ lead. Well, don’t get your hopes up, kids: In a few years, Aussie-made Holdens will, like Aussie-made-Fords, become a thing of the past, and the odds of Ute production being transferred to this or any other side of the globe are slim and less-than-none. Which is a shame, because a pickup version of the Chevrolet SS wouldn’t sell any worse than the SSR did…right? 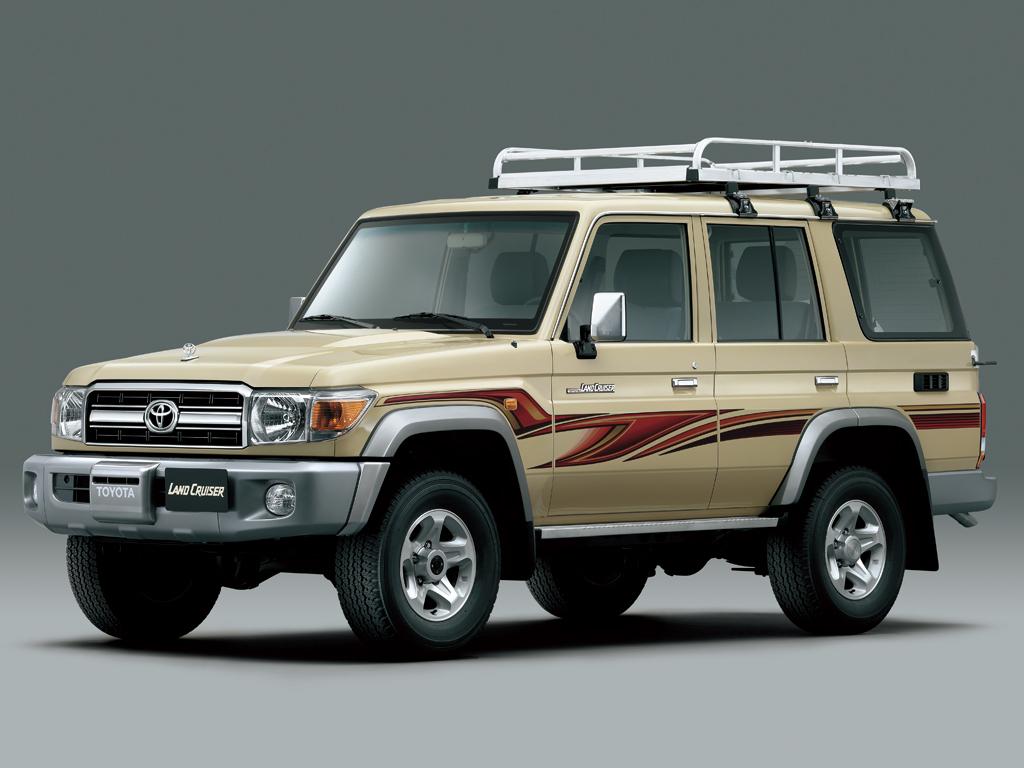 Based on Toyota’s current U.S. lineup, you would think that the only Land Cruiser the company makes is a big, luxurious four-door SUV for buyers who consider a Sequoia or Highlander too proletarian and anything with a Lexus badge too bourgeoisie. In reality, Toyota applies the legendary Land Cruiser name to multiple off-roaders on multiple platforms in other parts of the world. And the member of the Land Cruiser family that most closely resembles the earliest examples of the model (at least in concept) is the 70 Series.

Although the basic body and architecture (replete with solid axles front and rear) dates back to 1984, the 70 Series Land Cruiser (which is available as a 2-door pickup, 4-door pickup, 2-door SUV, 4-door SUV, and a 2-door troop/crew transport van) has undergone numerous detail updates and upgrades over the years. Chief among these revisions, as far as we’re concerned, is a 4.5L V8 turbodiesel rated at 202 horsepower and 317 lb.-ft of torque. We can understand Toyota’s reluctance to bring the 70 Series to North America (though the 2-door SUV was briefly offered in Canada in the mid-1980s), given the smorgasbord of crossovers, SUVs and pickups it already offers here; however, we wouldn’t mind seeing that V8 diesel show up on the options list of, say, the Tundra (though realistically, the more muscular twin-turbo version would have a better chance of finding sales success).