The Top 25 Exotic Supercar Wrecks of All Time 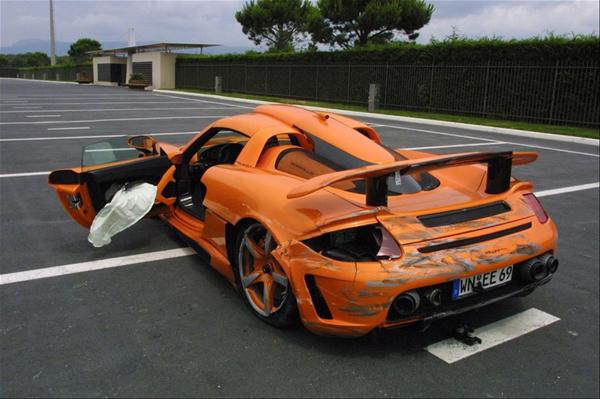 We treat supercars like celebrities. We love them, always looking for the next big star. But we also jump to know the whole story should one crash and burn. You could shoot a gun at an Alfa 8C and I’d probably dive in front of it and take the hit, yet at the same time I couldn’t stop watching a guy take his Veyron swimming. I don’t think we expect it to happen.  I still get shocked when someone loses it while trying to dorifto in their Koenigsegg.

But the fact is these are extreme cars, some having as much (or more) horsepower than an F1 car. Sure they have fancy suspensions and big brakes to boot, but the thing is unlike race cars, anyone is allowed to drive one. Money can’t buy talent, just look at Paris Hilton. Rich doesn’t mean you can drive, so a crashed supercar makes total sense. Below are 25 examples of supercars going wrong. Not all of them are due to driver error, but if you’re thinking about putting down a deposit on something like the Zenvo ST1, make sure you attend a driving school first.

The Ferrari 458 is So Hot Right Now 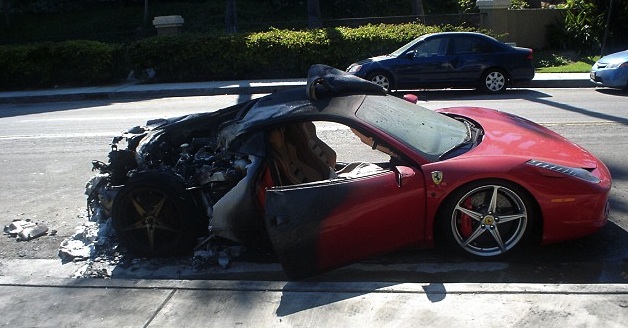 Italian cars have never been known for reliability, but this story makes a 1972 Alfa seem like a Honda Civic. Take a warm Costa Mesa, CA day, add a lead foot, stir in a bad heat shield and you get a delicious Ferrari Osso Bucco. After only a few months, Ferrari is issuing a total recall of their new 458 fleet, due to them spontaneously catching on fire (watch one burn in China). Usually a recall happens to replace a bad fender liner, or perhaps carpeting that’s too thick (hi Toyota). Sometimes recall notices can be ignored, but this is not one of them. 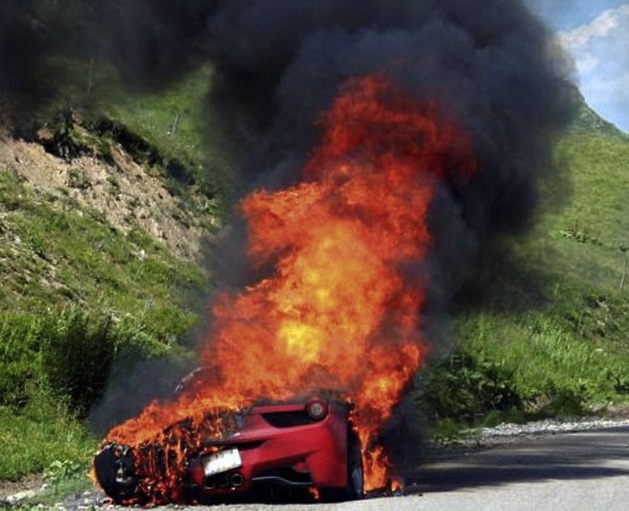 Seeing the aftermath of a Ferrari fire makes us shed a tear. Seeing a picture of one completely engulfed in oil-well-caliber flames is a fireworks finale and car wreck rolled into one delicious visual treat. You hate what’s happening, but you can’t look away. This happened after a Swiss owner wrecked the car on a mountain pass. That’s a very costly way to make fondue… 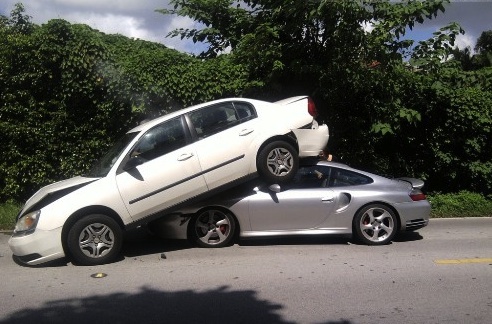 I hate the word “literally”, because it’s constantly used in the incorrect way – just to make something sound more spectacular than it was. In Miami, a car rear-ended another car, and started one of those chain reactions you hope to never encounter. Had this Porsche been going the speed limit its supercar brakes could have stopped with enough spare room to host the Super Bowl. It wasn’t, it didn’t. 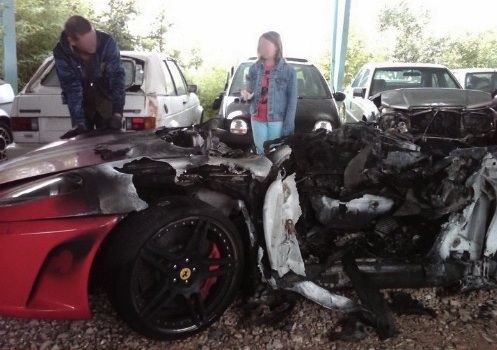 We’ve gushed over the tuner Novitec Rosso numerous times. It’s not hard to love a company who makes 700hp Ferraris. As was the case for this man, until one night, while driving home at a mere 80mph, his Novitec F430 caught on fire. He was fine, but Novitec’s reputation took a hit. 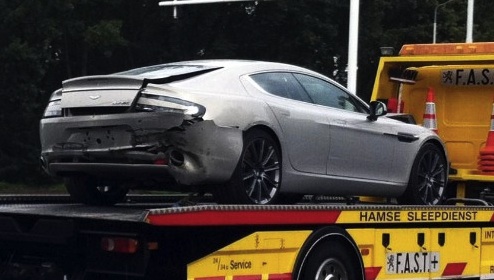 This isn’t that bad of an accident, but the story makes us laugh. This Rapide wrecked in front of an elementary school in the Netherlands. Details were slim, but I can imagine a proud dad dropping off his kids in his new 4-door supercar. His kid had the biggest grin, proudly puffing out his chest at how awesome his family is. His dad waved goodbye, throwing a smile at the staring moms, and figured he’d ice the ego-cake with some rapide acceleration. Too bad money and an Aston don’t equal driving skill. It’ll be a while before he’s invited back into the car pool, probably around the same time his kid stops resenting him for having to transfer schools out of embarassment. 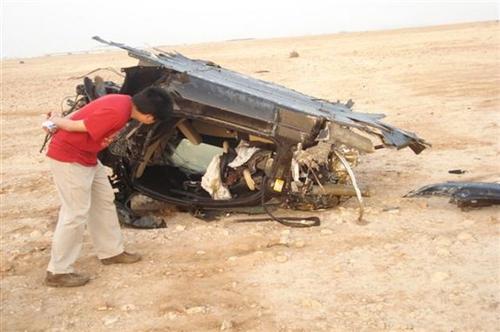 This car flipped so many times and lost so many body parts it looks more like old helicopter wreckage than a car. If you can figure out what it is without reading on then A) You are a freakish Steven Hawking of cars or B) Want a job? 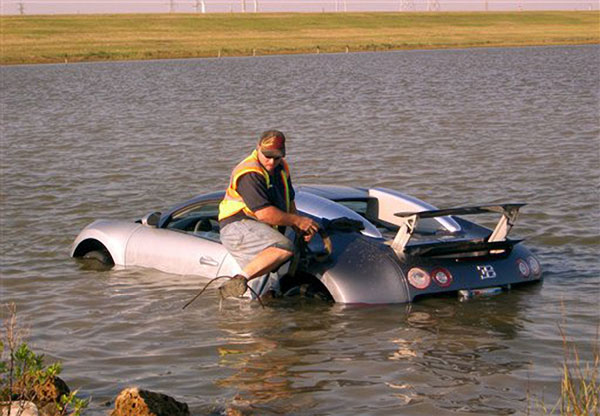 Ladies, this man is a catch. His name is Andy House, and he owns a business that repairs and sells wrecked exotic cars. He bought a Bugatti Veyron, and then stuffed it into a lake when he was distracted by a pelican. Luckily he can hire himself to fix it. So what you have here ladies is a human alchemy machine. He’s not just the president, he’s also a client.

Really Bad Day at the Office

Ever have a case of the “Mondays?” What happened, it was cloudy out and the coffee was too weak? Whaa wha. Maybe this will put things in perspective; while developing a prototype, complete with a twin-turbo V10 called the RS8 (AKA “Perfection”) Audi’s test car spontaneously caught on fire at the ‘Ring, and burned to ground. How’s that coffee now?

It was a few years ago, but this crash was one that was heard round the world, thanks to the fact that Top Gear has 350 million viewers (Beat that Chocolate Rain). It’s not a big crash, but I know time slowed down when I saw it for the first time. 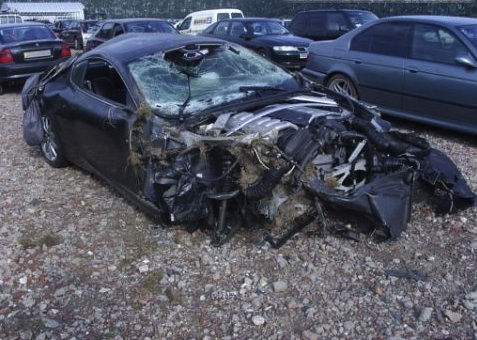 Know what we absolutely love? Aston Martin DB9s. Know what we hate so much we hope they die by parking-cone-insertion-induced-hemorrhoids? Car thieves. Car thieves stole this DB9, thereby violating one of the most beautiful and sacred creatures on earth. But Karma is a bitch, and the evildoers rolled it a few hours later. I hope the doctor that treated them was a car guy, “Sorry mates, we’re fresh out Vicodin, X-rays and bedpans. Suck it up. Doctor’s orders.” 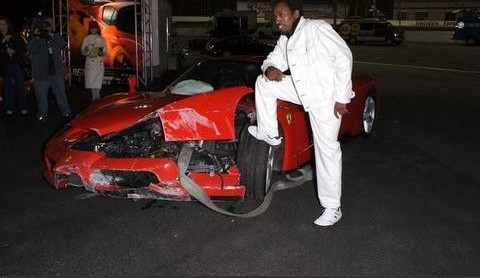 Eddie Griffin has been plenty entertaining over the years, performing in numerous movies and touring the country as a comedian. But we’ve never googled his name so many times, and watched a single scene of his so many times, as when he stuffed a Ferrari Enzo into a concrete barrier promoting the cinema atrocity known as “Red Line.” Side note: Andy House bought and fixed the car. 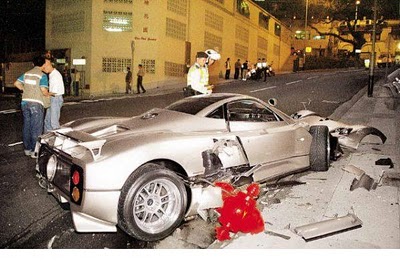 The hippies are always whining about how wasteful we are with natural resources, and how we’re killing off endangered species. I’d like to hire the people that tie themselves to redwood trees, and have them chain themselves in front of the 14 Pagani Zonda C12Ses that are left on the planet. Pagani only made 15 of these stunning, beautiful and electrifying cars. This guy thought it was so fantastic it was worth the $750,000 price tag 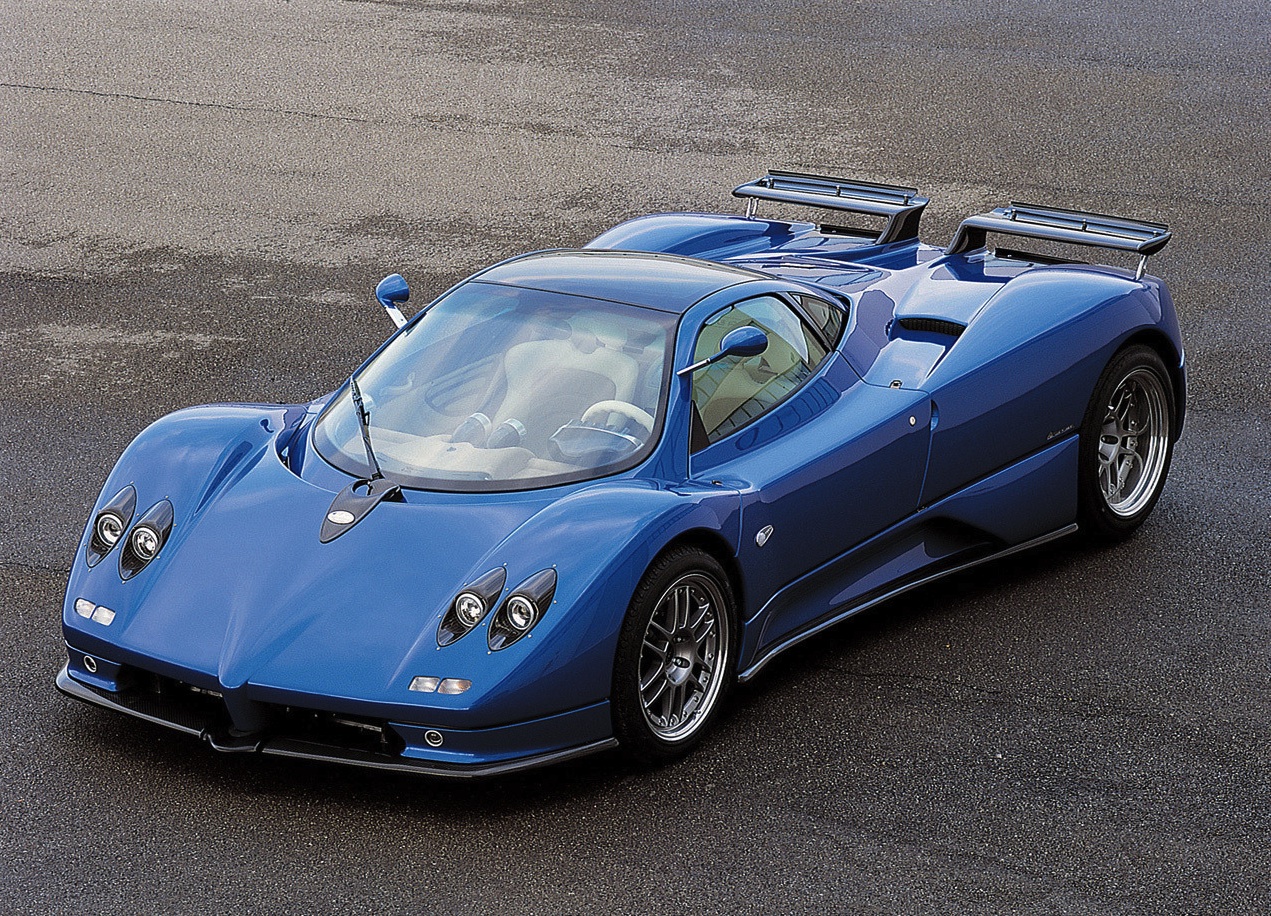 There’s a time and a place to wind out a car this rare, and it’s not through the city streets of Hong Kong. It’s on a race track surrounded by pillows. So please, look at the C12 S. See the innocence in its eyes and donate now and help us save the rest of the C12Ss from extinction. 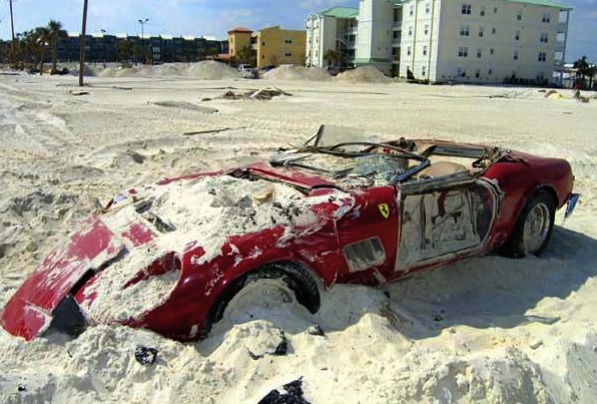 As much as it pains us to see an exotic car wrapped around a pole or shoved up a tree, when it happens because the driver was whipping across the tarmac with more balls than brains, a small part of us has to say he deserved it. This Ferrari is on here, not only because at $10,000,000 it’s one of the most expensive “wrecks” ever, but because the owner wasn’t even in the same zip code when it happened. The car was being stored by a beach. Apprently Mother Nature had just found out she’d been swindled out of $80M by Bernie Madoff, and expressed her anger in the form of a hurricane. The car was found embedded in the sand, with hermit crabs trying to hot wire it. 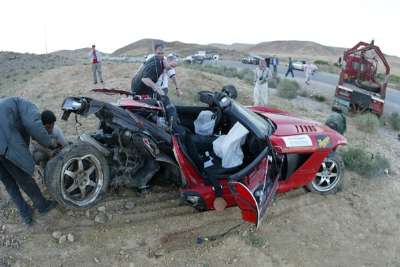 This is easily one of the worst and craziest crashes we’ve come across. It’s from the 2004 Gumball 3000, and was the first serious accident in Gumball history. The Viper, driven by “Torquenstein” was going 140 mph and spun off the road. Glad the guys walked away. Thanks to Streetfire.net for uploading the video.

Combination of Water and Throttle Overdose Proves Deadly to Veyrons 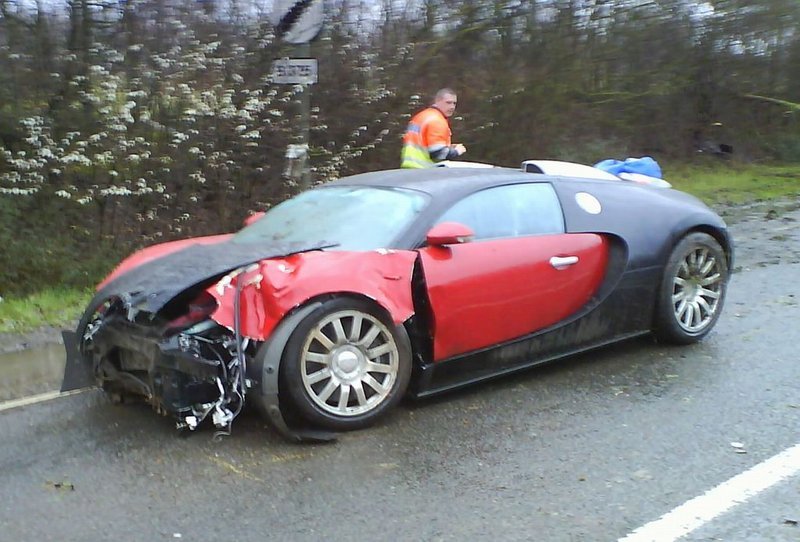 Veyrons don’t seem to do well with water. This one didn’t decide to dive into the deep end solo, it just had a good old fashioned “floored it on a wet spot, spun three times and hit another car”. It just goes to show you that with enough power, even computer-controlled AWD isn’t fool-proof. To cap it off, the driver was a guy who rented the car for one day. For how much you ask? $32,000. That was probably both the fastest and longest day of his life.

Maybe You’ll Get a Refund? 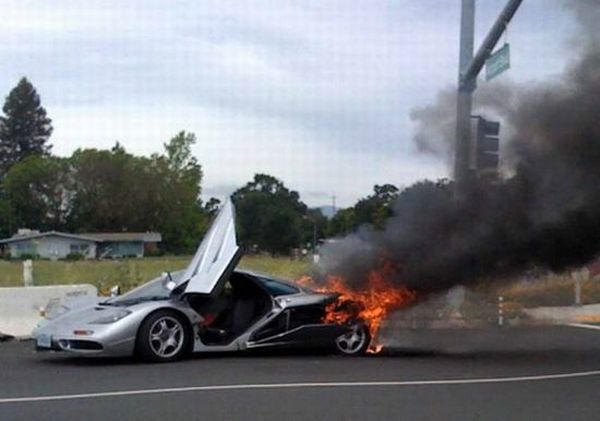 We remember hearing something about the McLaren F1 needed gold-plating on the underside of it’s hood because it’s the best heat reflector. Just saying. 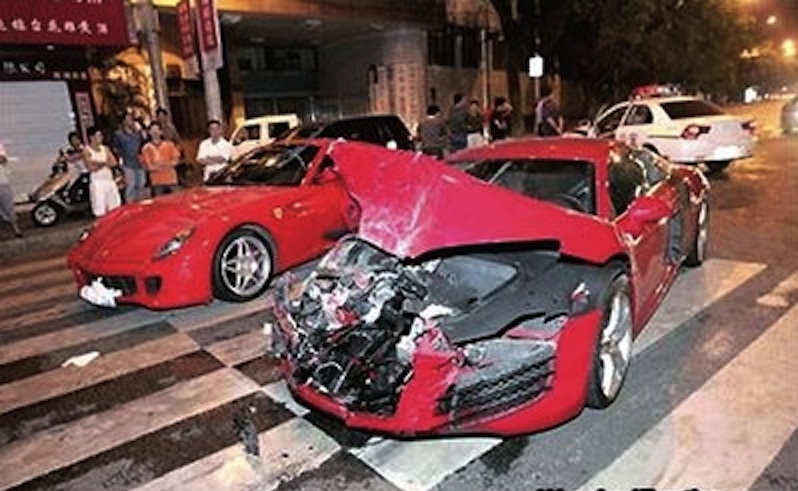 This Ferrari 599 and Audi R8 were driving in China, with the 599 leading. A taxi in front of the 599 slammed on his brakes. The 599 was able to stop short of hitting the taxi, but the R8 couldn’t pull the rains hard enough and slammed into the back of the 599. “Phew! That was close! We almost hit that tax….what the hell?!!!”

Line Drive, Down the Middle 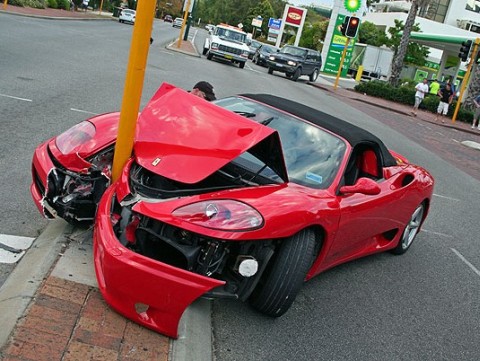 Activities like driving, riding motorcycles and skiing all share an important general rule; look where you want to go, not where you absolutely, positively would absolutely hate to go. 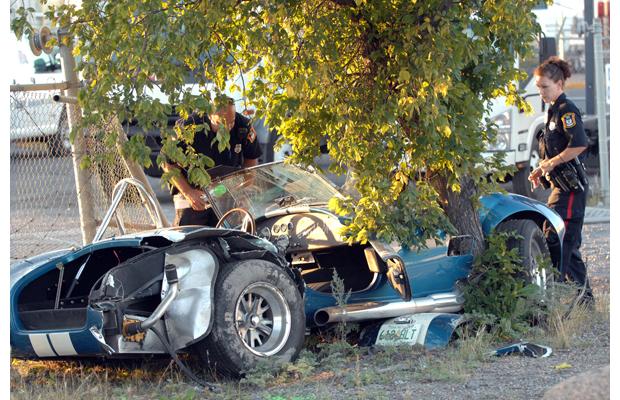 These cars generally weigh about 1800-2000lbs, are built with 400-500hp and sport a weight distribution similar to Pamela Anderson. It’s not hard to end up like this guy, who was lucky enough to walk away. 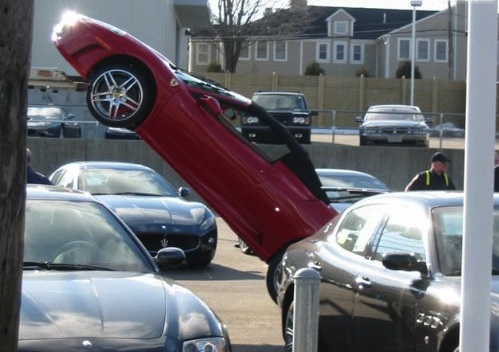 This car was being loaded for delivery, and something went seriously wrong. C’mon buddy, you gotta handle these things like a newborn. 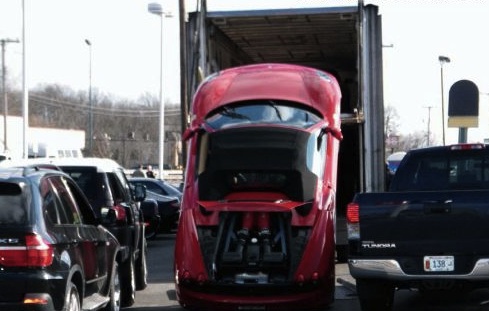 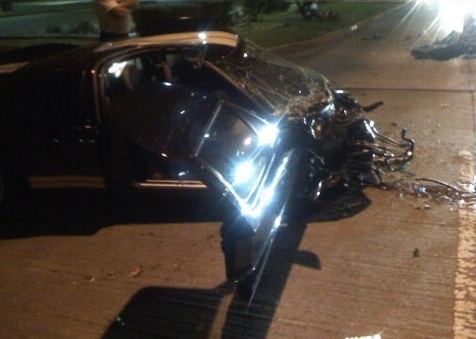 How often do you think those words are said immediately before a car splits itself in half? This Ford GT was only going 30mph when it struck a light pole, shaving the front clean off. The driver wasn’t hurt. I guess it’s like hitting the Ford GT in the knee cap. 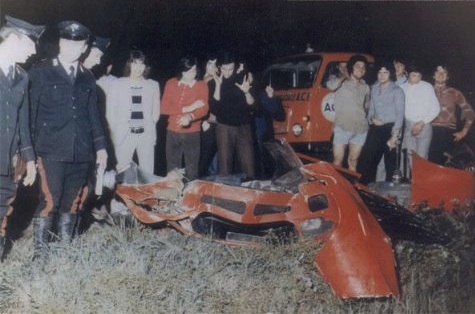 The Lamborghini Miura is one of the most beautiful cars ever made, but is also said to be one of the most dangerous. Big power, no traction control, spontaneous fires, Italian wiring. There’d probably be a lot more pics like this if camera phones had existed back then.

Note To Self: Buy Roll Cage 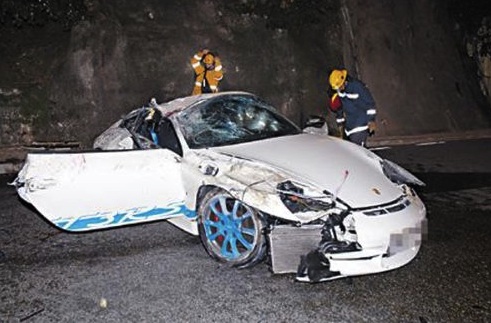 This guy hit a pole and then bounced up and off a wall so hard he actually bent and cracked part of the stock roll cage. It saved him, but in a car with less metal (this had roughly the same amount as the Eiffel Tower) would have been in far worse shape. 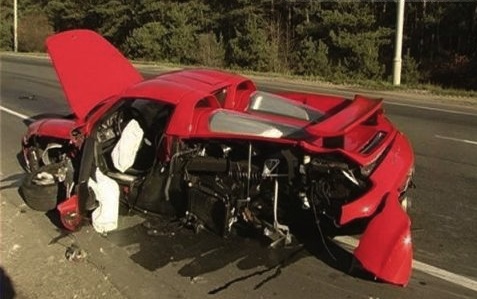 Roughly how awake you need to be to drive a Porsche GT.

Didn’t get enough? Check out this epic video compilation made by tendency82, of all the best supercar fails he could find. Hits include “How NOT to do a burnout in a Z06” and “Swimming with Veyrons.”