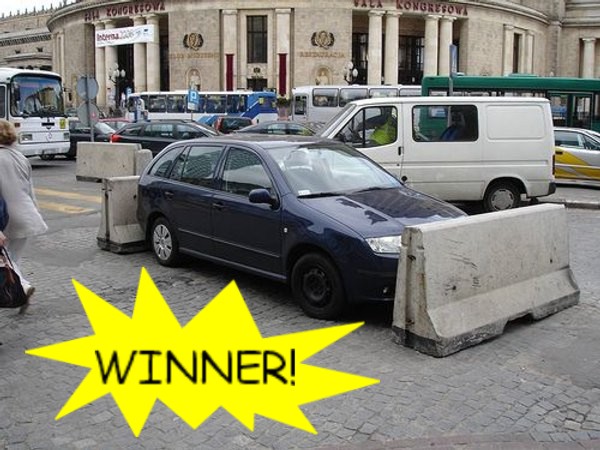 Although it might seem on paper like one of the easiest tasks in all of driving, parking can actually be quite a challenge for some motorists. Whether it’s something to do with spatial relation abilities being thrown off by moving slowly, wanting to impress the opposite sex or something else altogether, there are some people who simply stop their cars in bizarre, messy fashions. On the other hand, even the best parkers have been known to pick spots that turn out to be not-so-swell.

No matter what the cause, though, the Internet is overflowing with examples of automobiles sitting stationary in positions that range from awkward to outrageous. With that in mind, we decided to assemble 20 of our favorite examples of motorcar docking misadventures, along with some insightful (or, you know, not) commentary. Without further ado – or any regard to ranking or order – here they are. 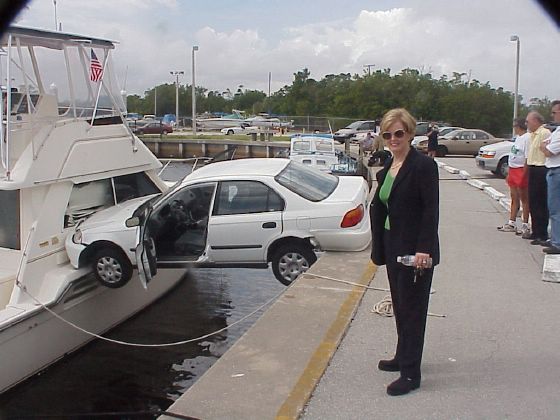 While this pic is often used as an argument against distributing drivers licenses to women (sometimes jokingly, sometimes not), we think the real issue raised by this picture is there is a real, a pent-up demand for yachts with garages.

One of Those Days… 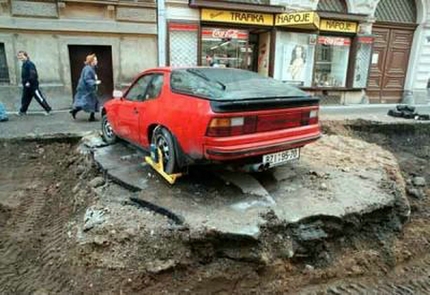 You know the meaning of the phrase “adding insult to injury?” The owner of this booted Porsche 924 most certainly does.

It’s Not Polite to Stair 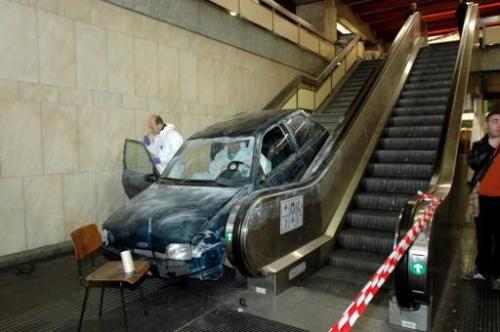 Even if you’re in danger of missing your train, and the stairs leading down to the platform are slightly wider than your Ford Fiesta, it’s not a good idea to actually drive down there…unless you’re trying to protect your fellow commuters from the Terrible Secret of Space.

Where my hose at? 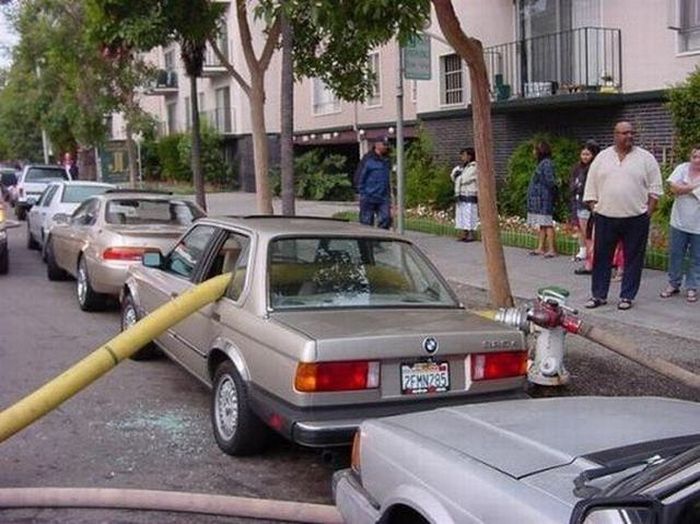 Just in case the threat of a ticket or a tow isn’t enough of a deterrent from parking in front of a hydrant, let’s throw in a couple broken windows for good measure. And if that isn’t enough, well…how long does Dalmatian poo have to sit on automotive upholstery before it stains? 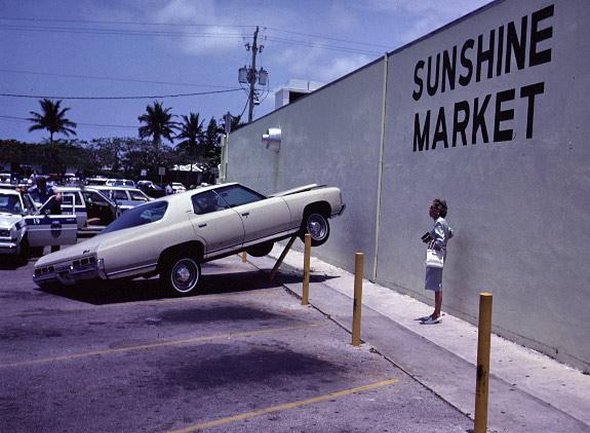 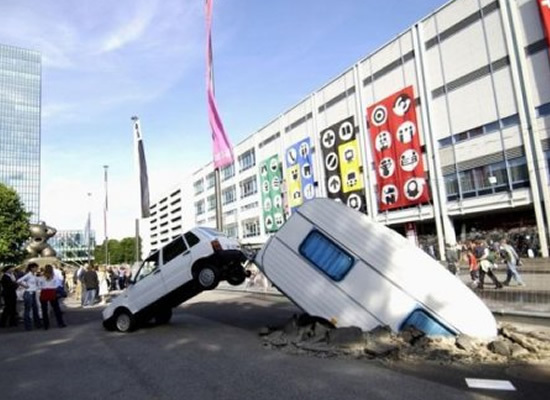 Scientists have been trying to create a type of asphalt that lasts longer and provides a smoother ride for decades. Apparently, they had far less trouble creating one that has an appetite for camping trailers. 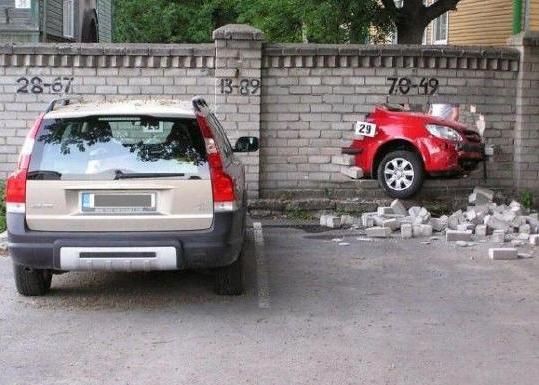 …and that, boys and girls, is why the Kool Aid Man isn’t allowed to drive in Europe. 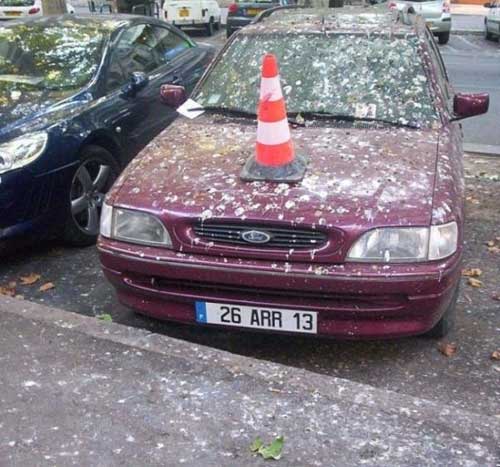 At first, Marc didn’t think much of throwing the nest and eggs that were in his rain gutters in the trash. By next morning, though, he had changed his tune.

What Do You Mean I Get an “Automatic F?” 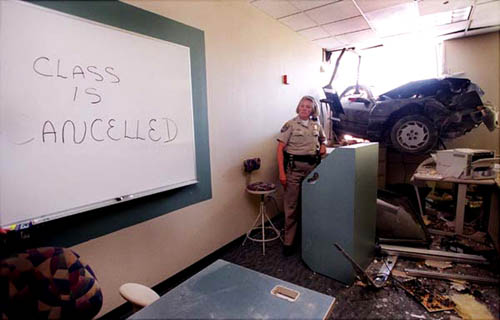 Jane really hated being placed on traffic school duty, and wished there was a way to get out of it. It soon became clear that she had wished a bit too hard.

In Russia, Trees Hug You! 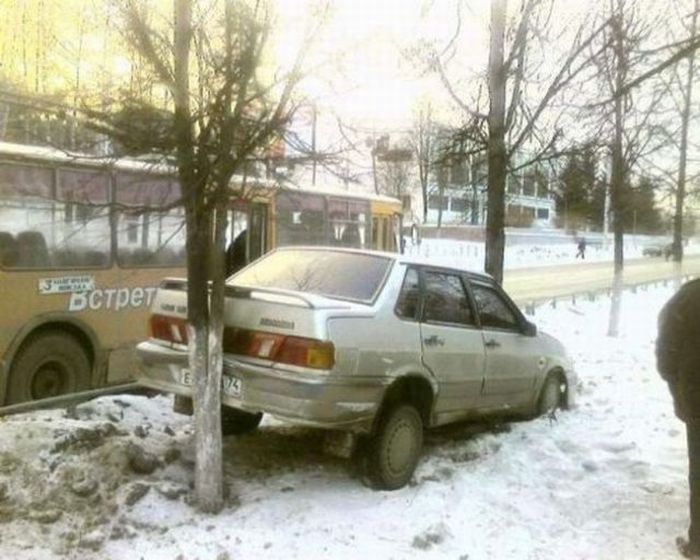 “Why is your car between trees?” 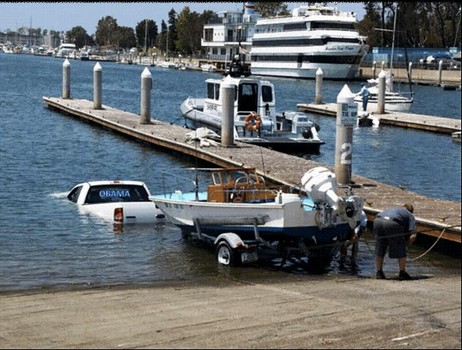 Can’t tell the difference between a truck and a boat? There’s an app for that. (Just kidding…we hope.) 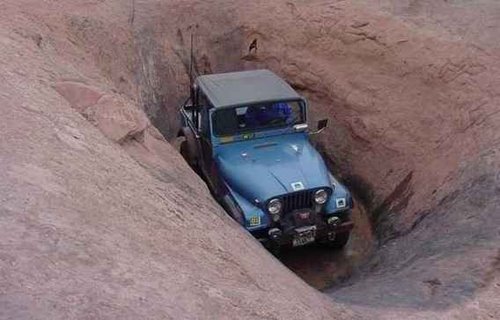 Ever have someone tell you to go crawl into a hole and die? We haven’t (lately), but this Jeep might very well have. 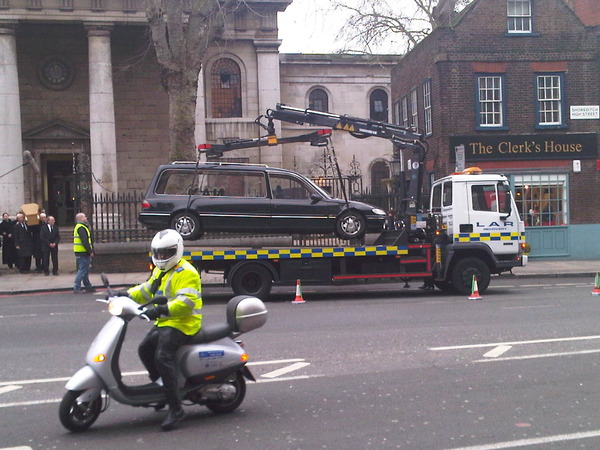 “Oh bollocks! I told Uncle Rupert to cut his eulogy down from 40 pages, but would he listen?! Noooo….” 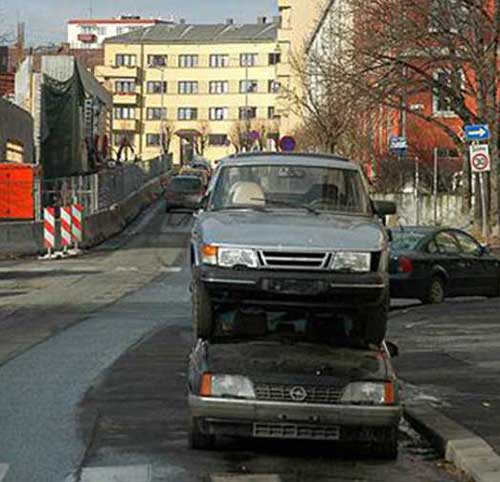 We knew GM cut a few corners when developing the second generation Saab 900, but we didn’t think the process was quite so…NSFW.

Water You Going to Do Now? 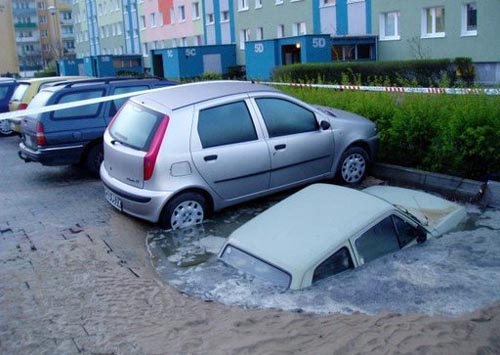 As bad ideas go, history would judge the car hot tub to be right up there with the solar-powered night light and the Internet dating service for amoebas. 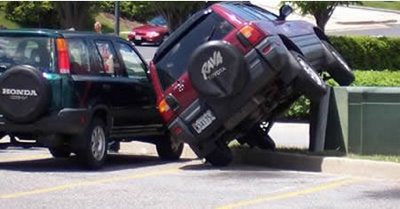 “There, I’ve done my good deed for the day: I’ve parked while still leaving room behind me. I’ve earned that soyfrappamochacinolatte.”

How Does It Feel? 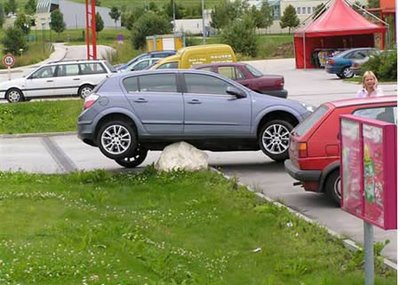 A rolling stone might not gather moss, but it is quite handy at ensnaring ham-fisted Astra drivers.

Thanks for the Tip 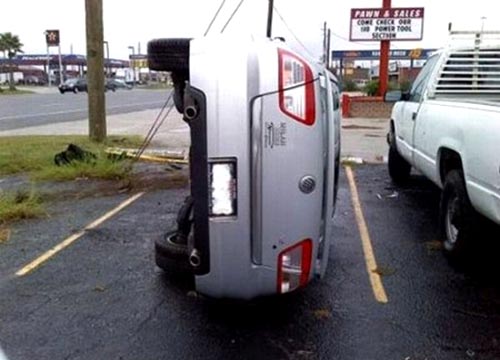 Intended to help differentiate it from its Ford Fusion twin, the Mercury Milan’s Variable Gravity System was quickly and quietly discontinued after a series of “incidents.”

Better Than Any Amusement Park Ride 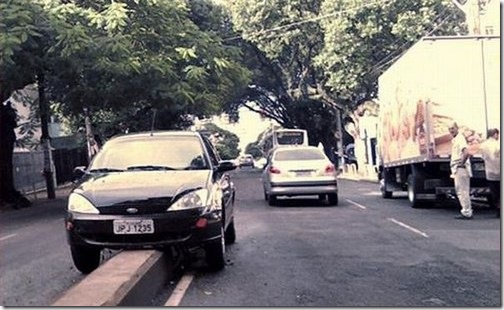 We’re not saying engineers should give up on trying to combine automobiles and monorails. We’re just saying that they should do their homework on it first. 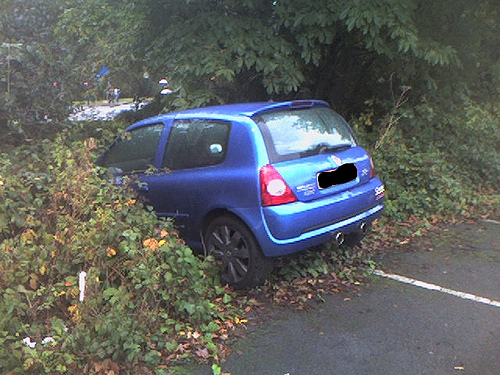 We all know a bird in the hand is worth two in the bush, but what’s the equivalent of a car in the bush? Two cars in the driveway? A dozen pizzas? Inquiring minds want to know!