Hard to believe it’s already November again, and you know what that means: The automotive aftermarket’s highest of high holy days – the SEMA Show in Las Vegas – are under way. While plenty of companies are content with hawking their wares a la carte, the best way to draw attention to your booth (aside from populating it with clothing-deficient members of the fairer sex) is to park a killer ride or three in it.

And if you ask us, the score of rides listed after the jump are especially killer.

One of the emerging trends in hot rodding is combining beater looks (faded paint, rust, etc.) and sophisticated, modern running gear hidden underneath. This 1952 Chevrolet Business Coupe – nicknamed Derelict and built by Icon, maker of Jeep– and Land Cruiser FJ40-inspired off-roaders – fits this mold to a “T.” With an Art Morrison chassis, 6.2L LS3 V8, electronically-controlled 4-speed automatic transmission and even anti-lock brakes, the Derelict might look like an old heap that was just dragged out of the barn, but it drives like it was built within the last five years. 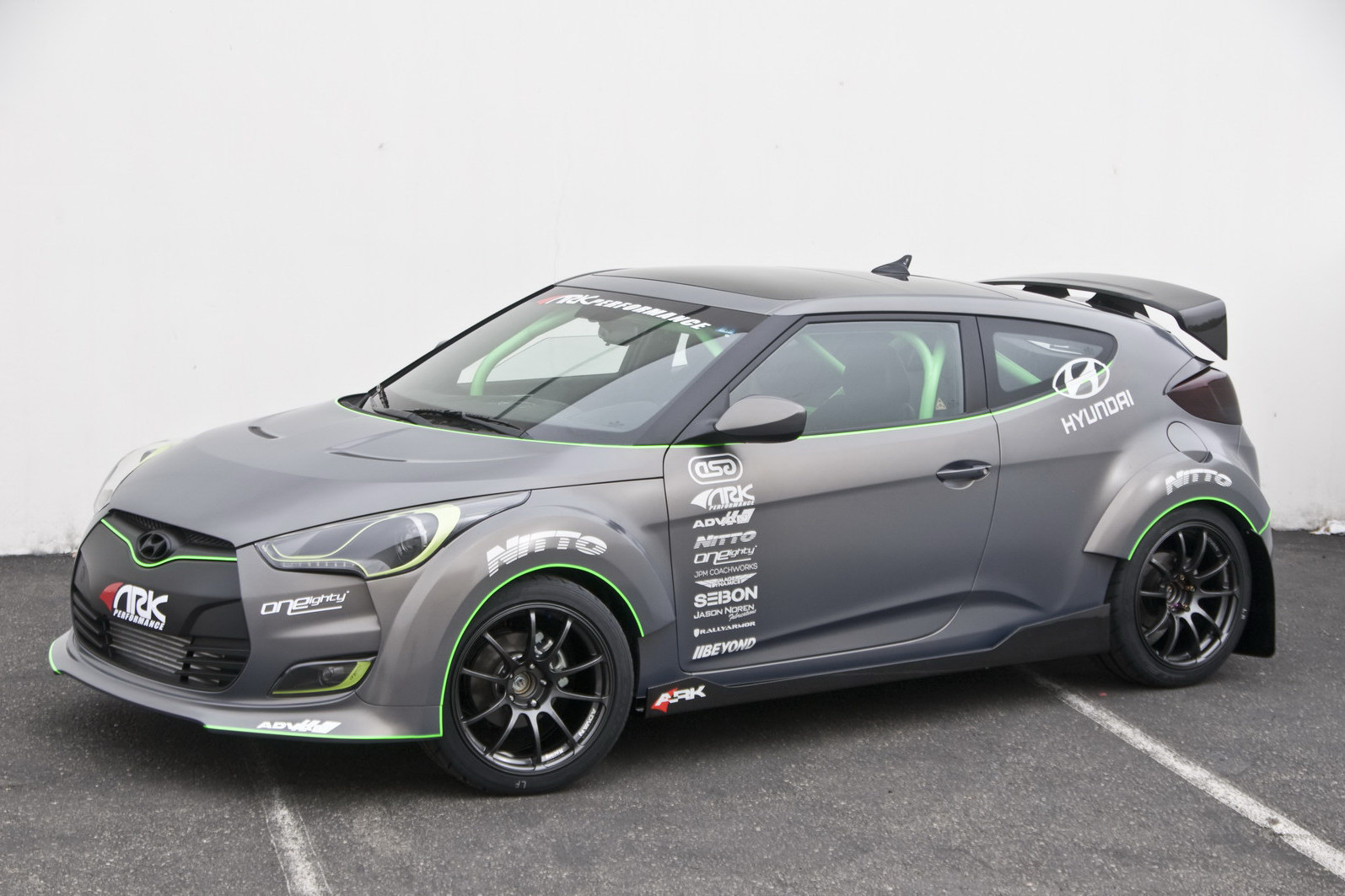 Hyundai’s new Veloster sport coupe (though the second door on the passenger side complicates that definition) is quite popular at this year’s SEMA Show, but our fave has to be the one tuned by ARK Performance. It’s been fitted with a turbocharger, goosing the 1.6L four from 138hp to 210hp, as well as a muscular body kit, roll cage, and a thumping Image Dynamics sound system. Think of it as a matte gray pile of WANT.

In 1950, American sportsman Briggs Cunningham fielded two new Cadillacs to the 24 Hours of Le Mans: A basically stock Coupe de Ville, and a Coupe De Ville that had been rebodied with a low-slung open-cockpit body. The locals dubbed that second one Le Monstre (The Monster). We have to wonder what a mid-20th Century Frenchman would make of this new Le Monstre, a CTS-V Coupe with a 7.0L supercharged V8 putting down a Veyron-tying 1001hp. We know what we make of it: Egad. 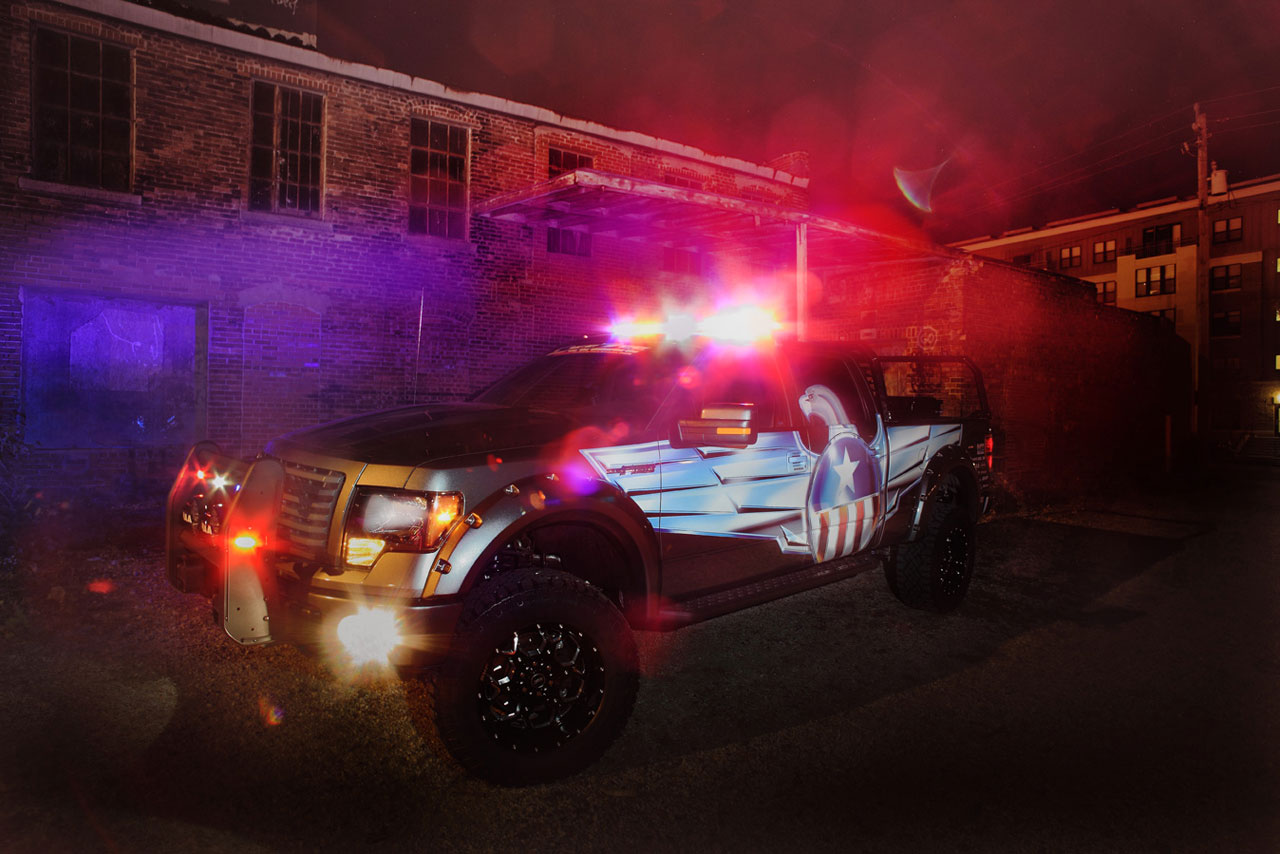 Now that the Ford Crown Victoria is no mas, American law enforcement agencies are left without a tough, body-on-frame patrol vehicle…or are they? Truck accessory manufacturer Dee Zee seems to think police departments would be wise to consider full-size pickups, as evidenced by this patriotic-to-a-fault Ford F-150 called the American Guardian. It’s part pre-runner, part interceptor, and all badass. 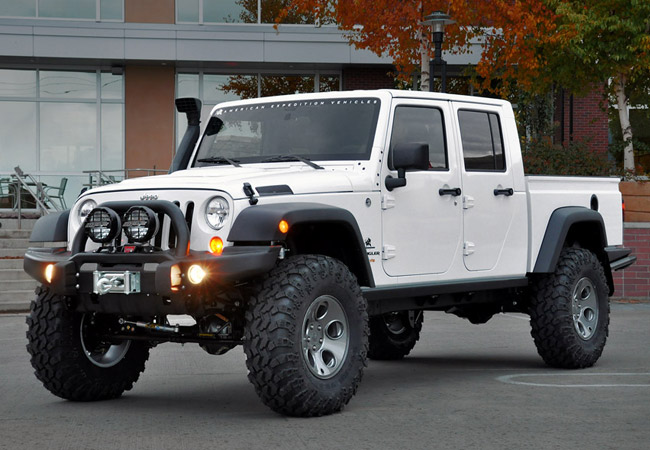 While Mopar now gives you the option to turn your Jeep Wrangler Unlimited into a pickup, AEV does Chrysler’s in-house tuner one better by serving up the Brute Double Cab. AEV stretches the wheelbase and increases the overall length by 30-inches, adding a 61”x60” bed onto the back. Think Jeep will finally get the hint about there being pent-up demand for a Wrangler pickup truck and offer a factory-built one? 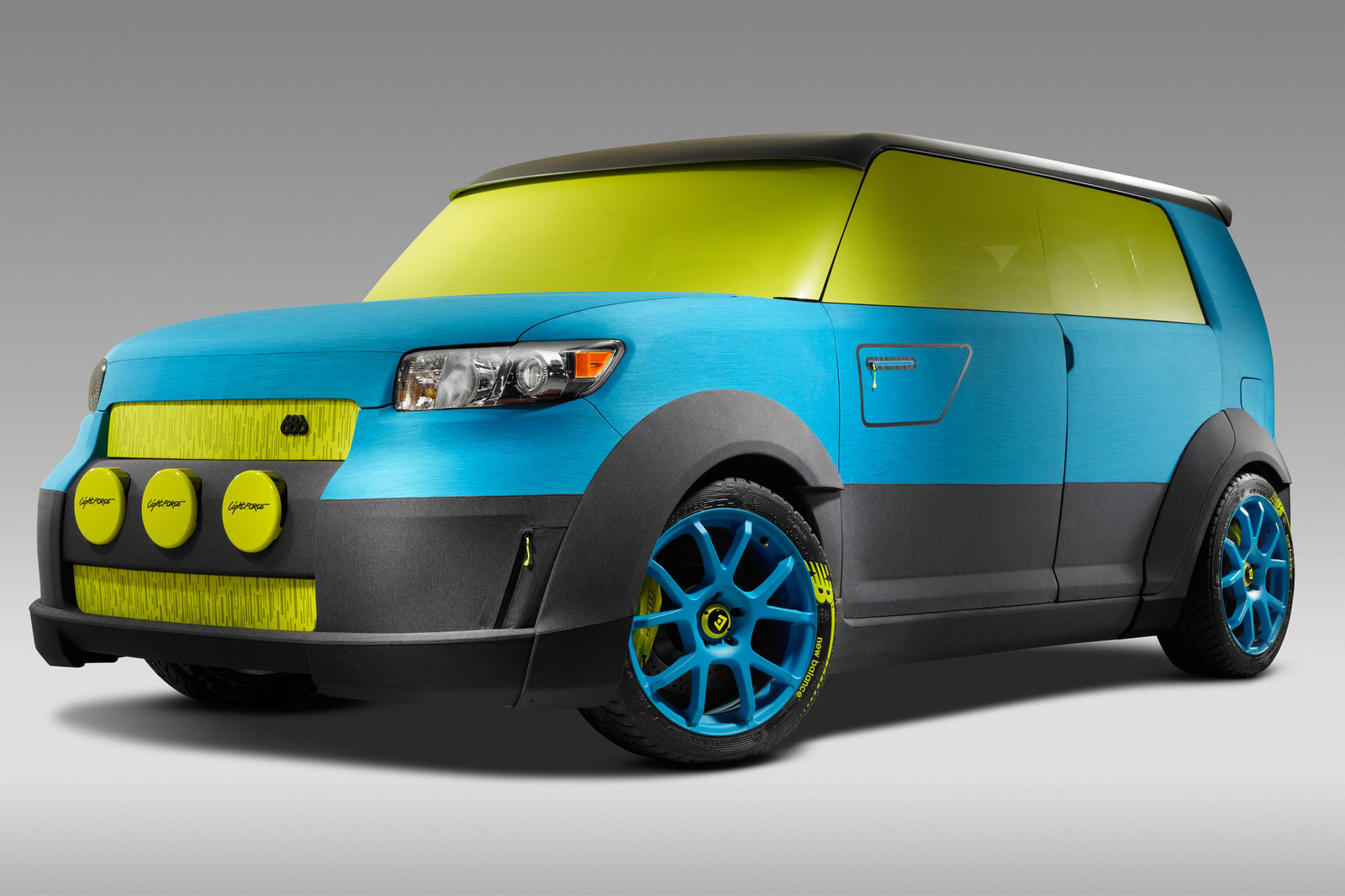 Snowboarding clothing- and gear-maker 686 teamed up with Scion to create this loudly-hued xB dubbed the Numeric. The B-pillar has removed and the rear door hinges moved to the back to create a wide-open opening for loading and unloading your board, helmet and other powder-shredding paraphernalia. Gnarly. 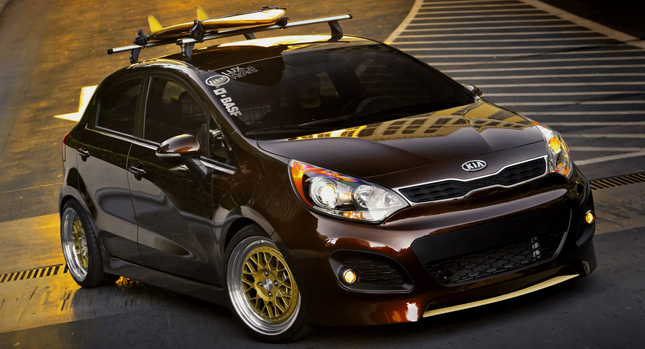 While the pioneers of surfing got around on land via woodies (wood-bodied American station wagons made up until the early 1950s), these days there isn’t really a clear automotive leader among the waverider demographic. In the interest of changing that, Kia – along with men’s lifestyle magazine Antenna – created this retro cool Rio five-door. With metallic brown paint and gold wheels outside and a game console that plays retro arcade games inside, it’s the kind of car that will make you the envy of the beach parking lot. 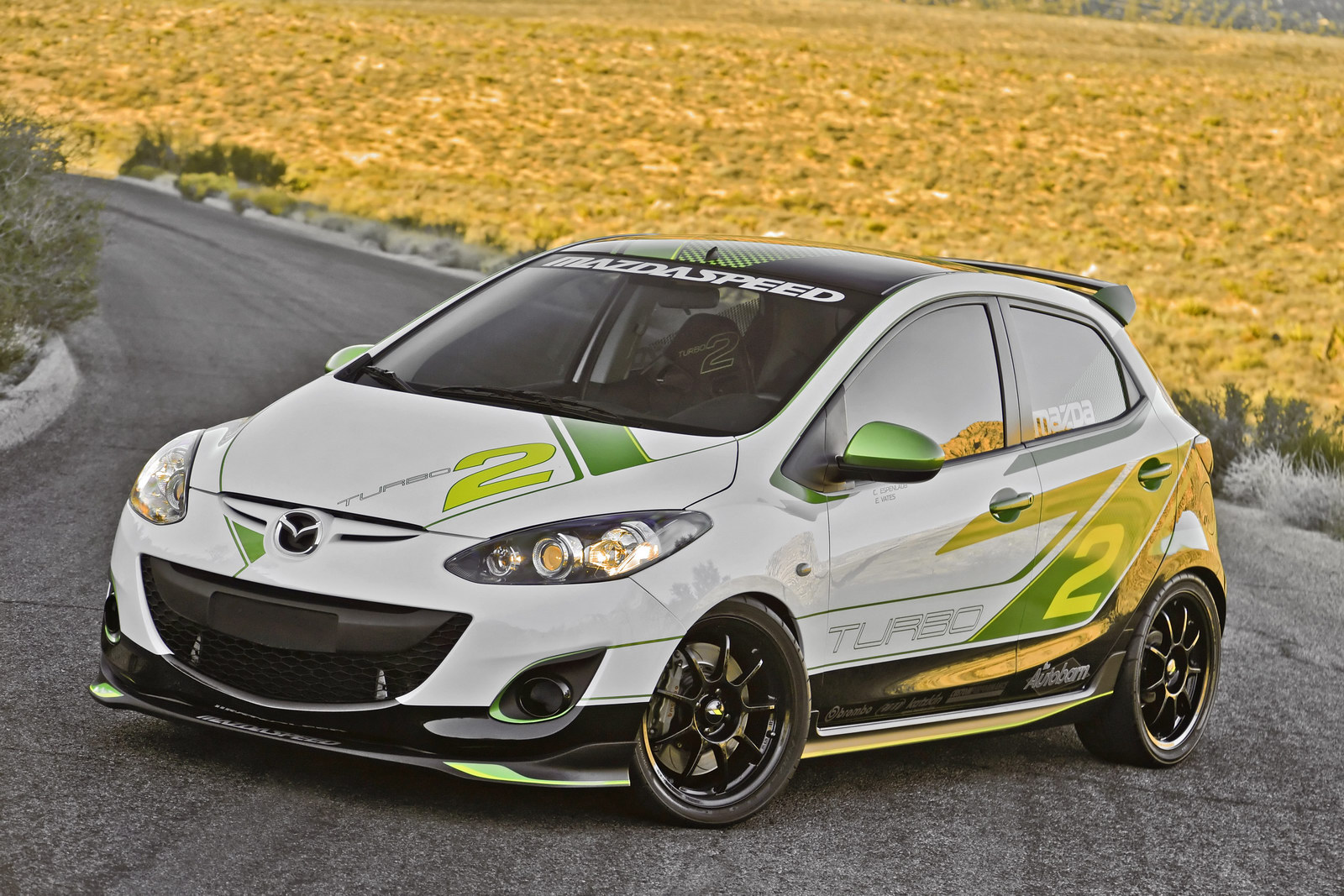 As subcompact cars go, they don’t get much more fun than the Mazda 2. But it is rather weak in the engine room, even by B-segment standards. Mazda has decided to show how it might go about rectifying this by adding a turbocharger to the 1.5L four-banger. It also added a loud body kit and graphics, but a production Mazdaspeed2 (Please, somebody make this happen.) would likely be much more subtle. 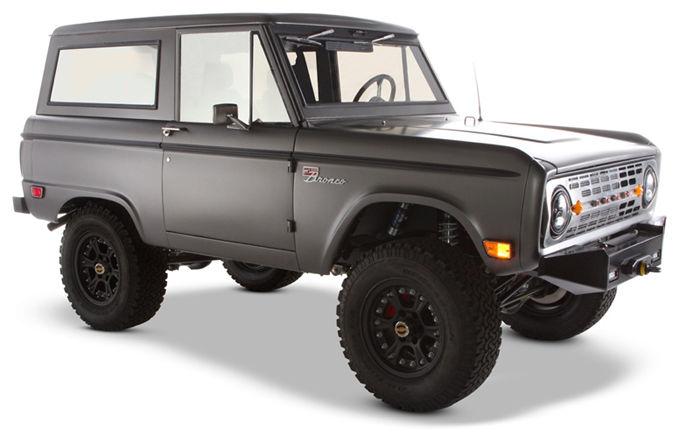 The Derelict isn’t the only machine Icon brought to SEMA this year; it’s also debuting a modern take on the first generation Ford Bronco. As with its Toyota and Jeep 4×4 classic riffs, the Bronco combines classic styling with modern mechanicals; in this case, it’s the Mustang GT’s 412hp 5.0L “Coyote” V8. That’ll really make this new-old horse gallop.

Since Ford and Dodge offer turn-key, drag-race-only versions of their pony cars, what’s Chevy still doing on the sidelines? Well, if the COPO Camaro Concept (named after the legendary extra-special-order Camaros and other muscle cars of the ‘60s) seems to suggest they won’t be staying there for long. The fact that the GM Performance Division peeps are already discussing what sorts of engine options would be available (a pair of LS-family V8s – a naturally aspirated 7.0L and a supercharged 5.3L – among them) suggests this quarter-mile monster (which is even fitted with a beefy live rear axle instead of the street Camaro’s independent rear suspension) will be available to order at your Chevy dealer’s parts counter sooner rather than later. 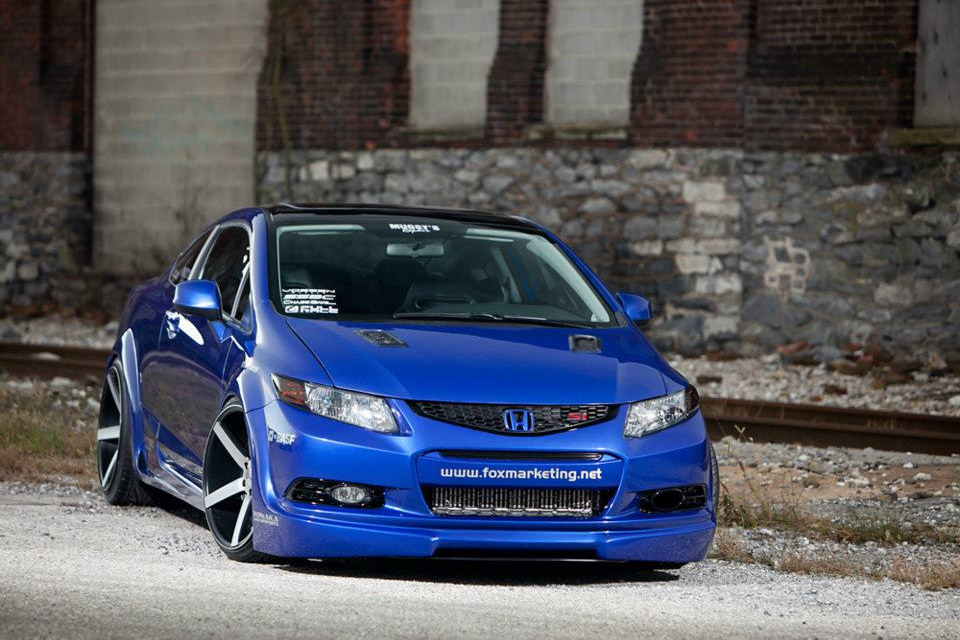 While some wet-blanket throwers lament the fact the new Honda Civic Si has traded revs for torque, Fox Marketing (which is not, in fact, a marketing firm) does not count itself among them. Why else would they build a widebody Civic Si Coupe with 450 turbocharged horsepower? With a figure like that, who needs that sky-high VTEC cam? 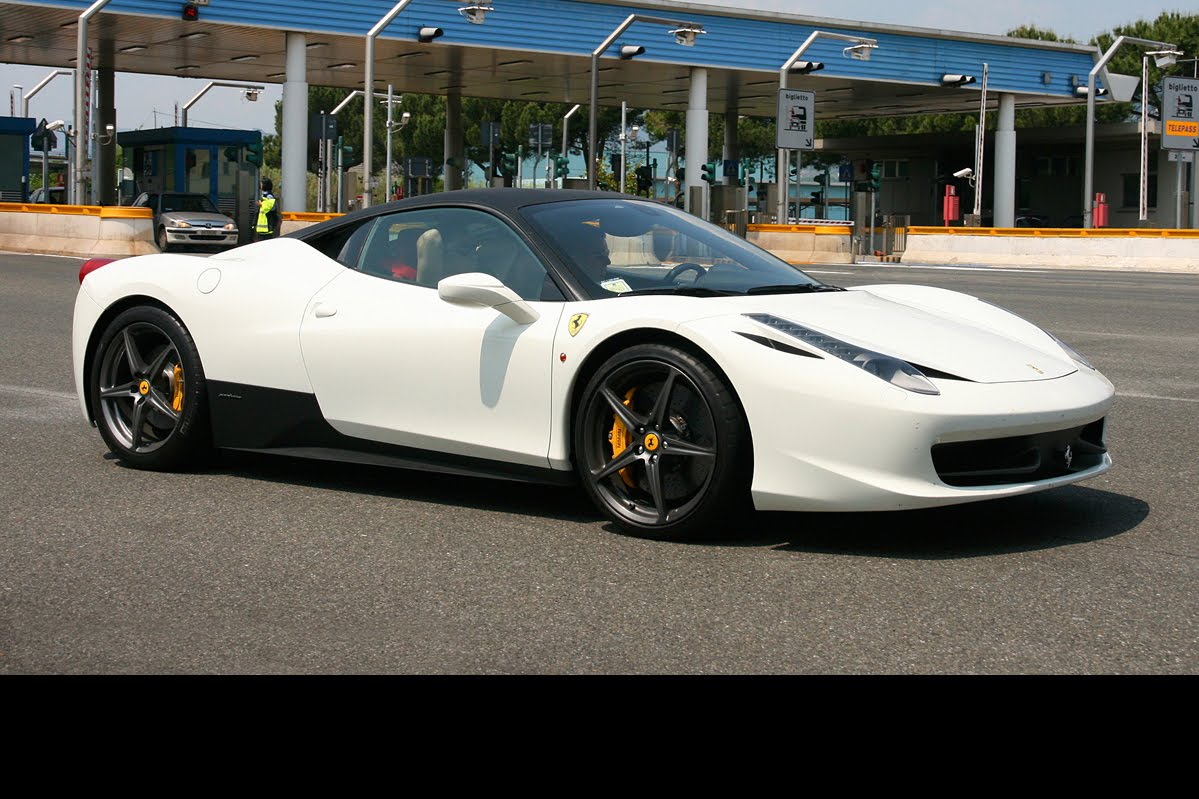 Many people will proclaim the Ferrari 458 to be motoring perfection, but what fun is perfection if you can’t mess with it? Enter German tuner DMC’s Milano package. The so-discrete-you-might-miss-it aero kit is fabricated from carbon fiber, while DMC also offers a variety of wheel options and an engine upgrade kit. 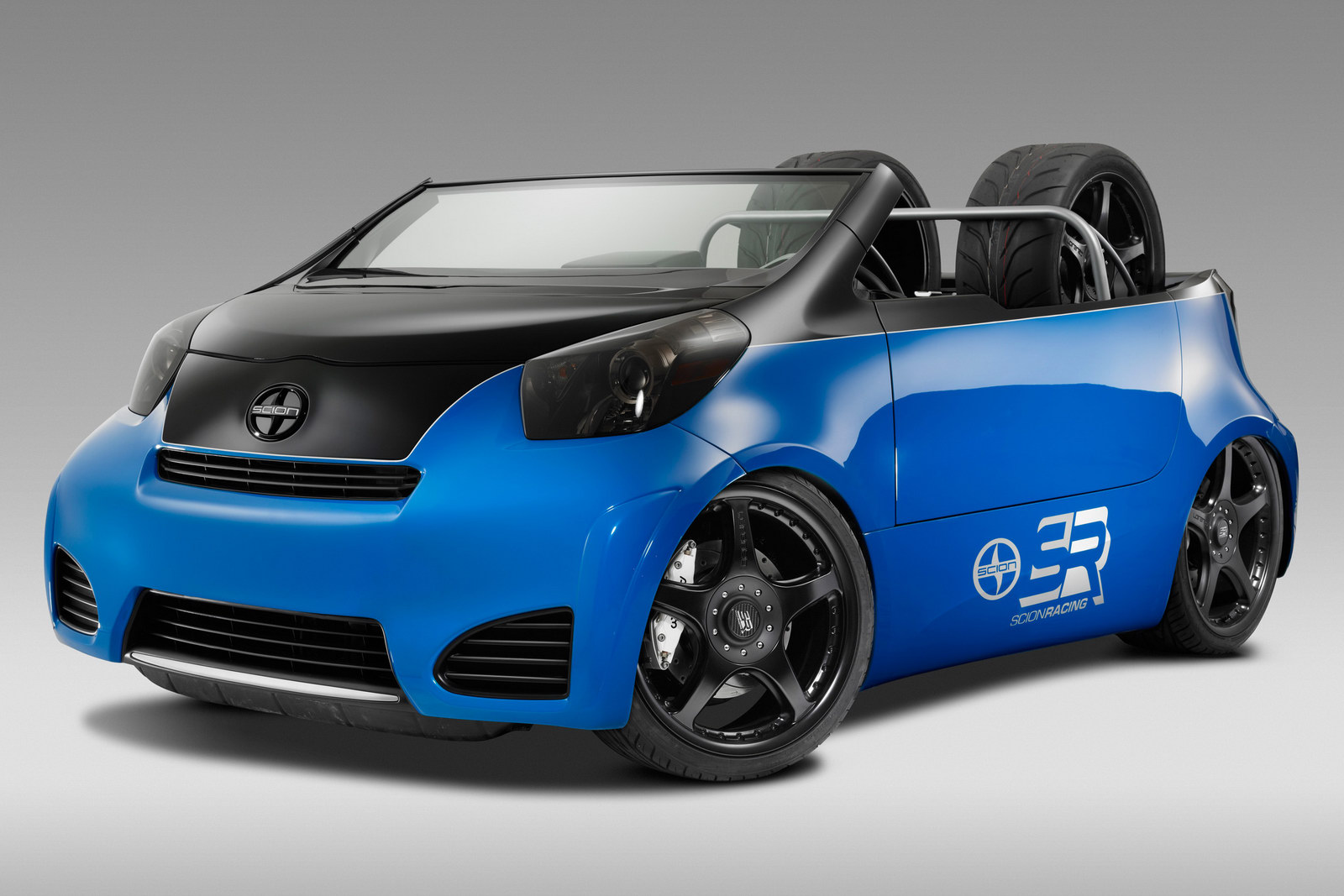 As the Scion iQ starts rolling onto dealer lots, Toyota’s youth brand wants to make sure it’s in the public eye. And what better way to do that than send a bunch of them to tuners and customizers and turn them loose to create some SEMA Show vehicles? While there was no shortage of cool modded iQs, we’re most intrigued by Cartel’s Pit Boss. It’s like those little carts race teams use to haul tires and other supplies between the garage area and pit road…but bigger, cooler, and more tech-fortified (it has an iPad to control various vehicle systems). 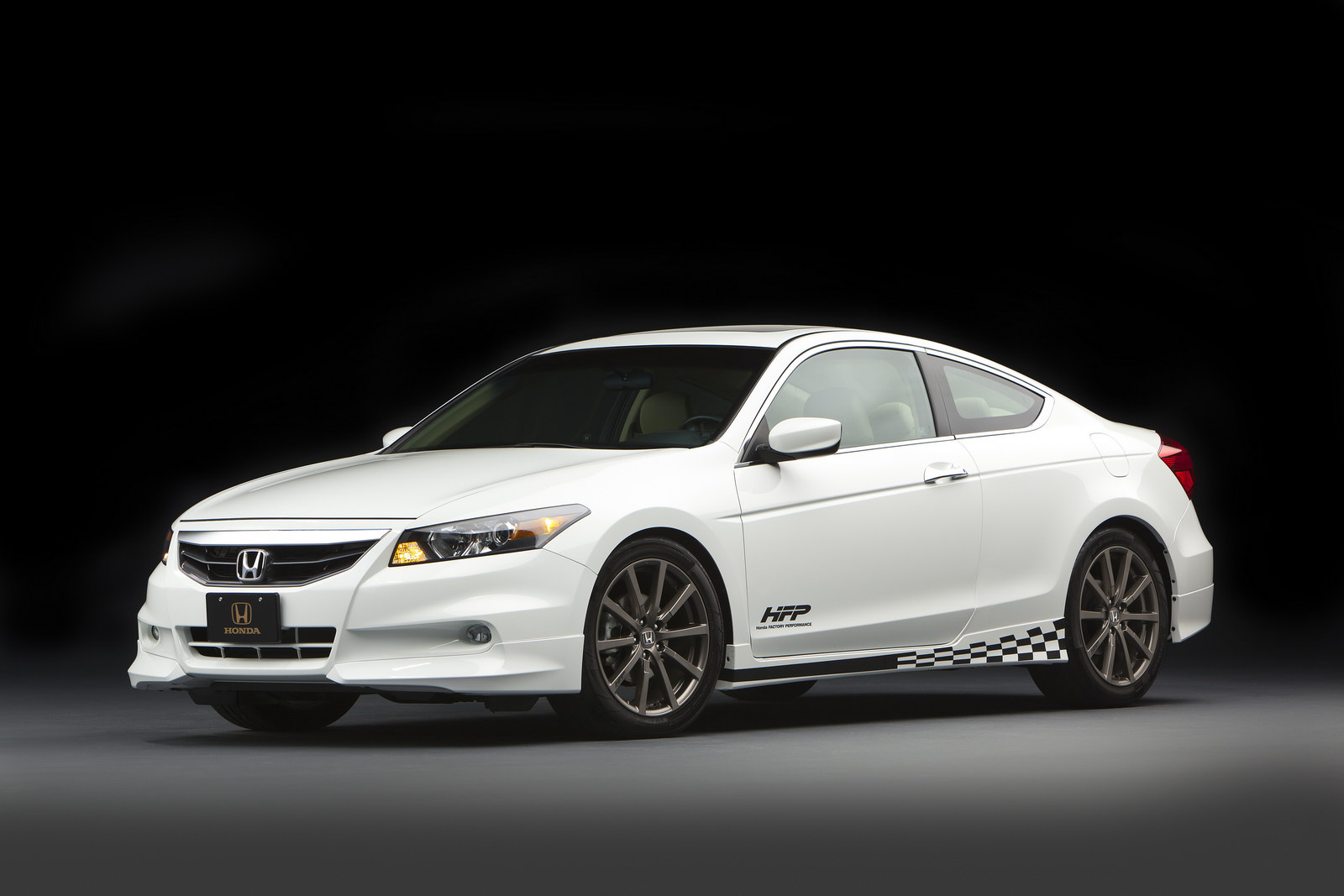 Honda calls the Accord “The One” in its advertisements, but even in V6 Coupe form, it lacks the sort of excitement you’d find in, say, the Jet Li movie The One. Not so with the Accord HFP (short for Honda Factory Performance) Concept. In addition to the wheels and body kit, there’s a supercharger feeding the 3.5L V6, helping it produce a claimed 335hp. The only downside we see? No plans for production. 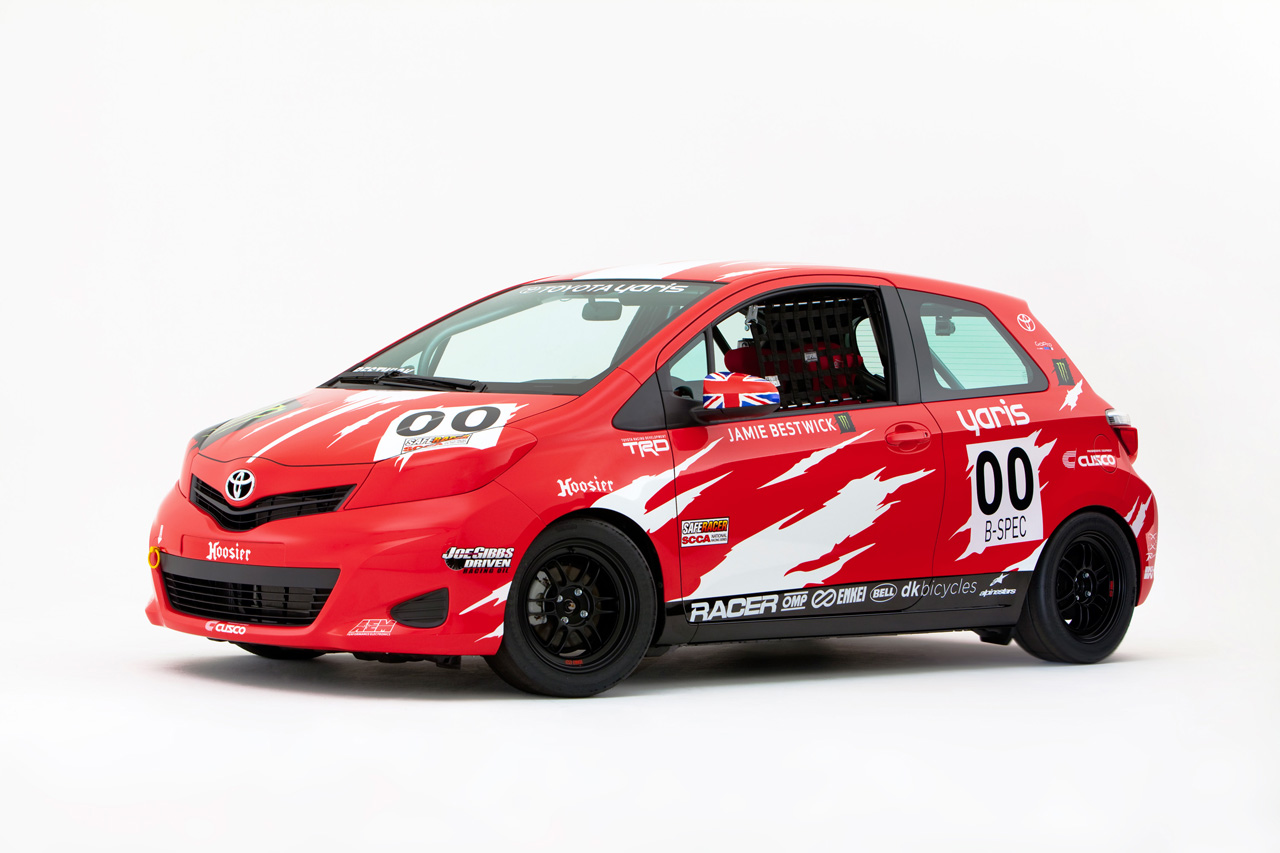 In a previous journalistic life, we worked alongside the fine men and women of SportsCar Magazine, the official publication of the Sports Car Club of America. And it was they who turned this humble 2012 Toyota Yaris three-door into an SCCA B-Spec race car. British BMX rider Jamie Bestwick will be driving it next year with the hope of doing well enough to earn a place at the National Runoffs at Road America. We wish him luck, and we wish the B-Spec class becomes as big as Trans-Am was in the late-‘60s, because road-racing tiny econoboxes sounds like a recipe for fun. 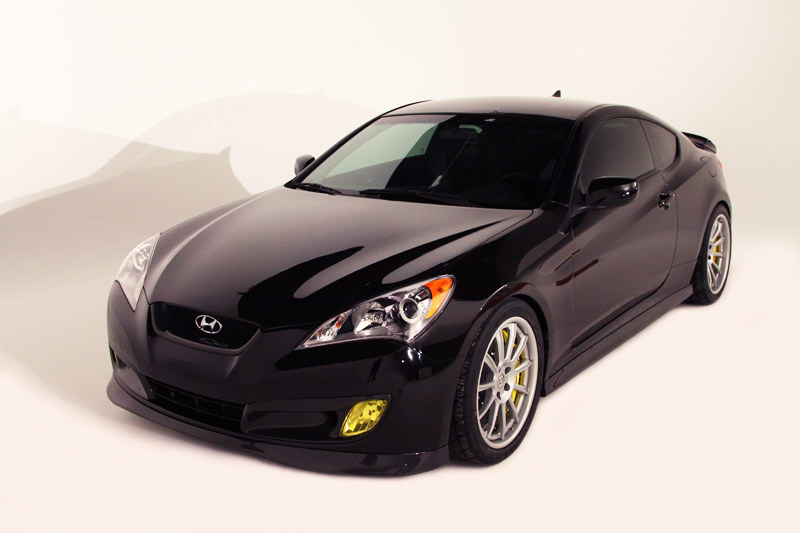 Drifter, racer and all-around hoon shaman Rhys Millen got the idea many of us have had: Put Hyundai’s 5.0L Tau V8 in the Genesis Coupe, something the Korean company either can’t or won’t do. And as if dropping in a V8 wasn’t enough, Millen and crew made a few additional modifications to the exhaust and cooling systems to yield a total of 449hp. Cap it off with a tasteful-yet-sinister body kit, and you get a car that takes us to our happy place. 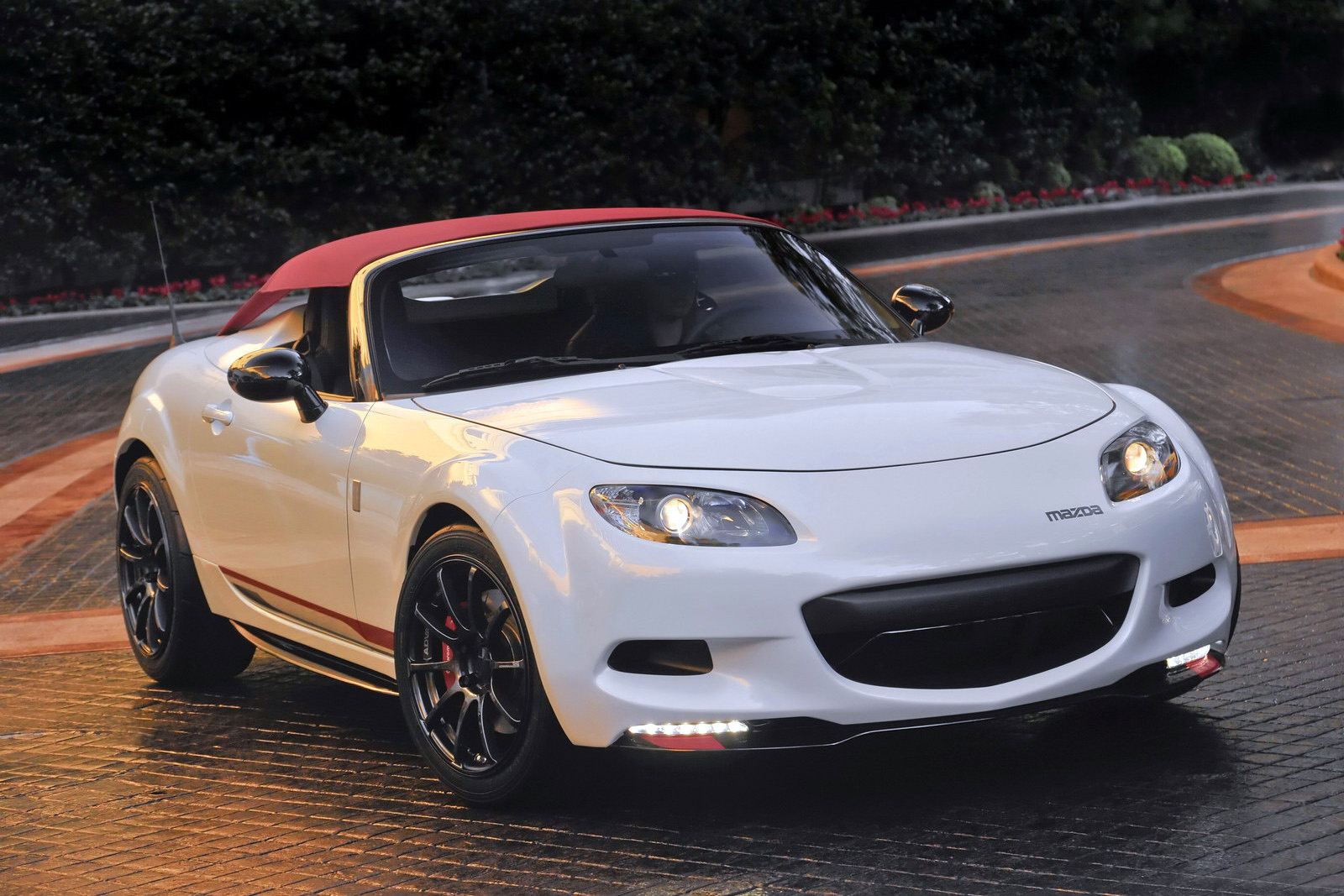 If the Porsche Boxster Spyder is a little too spendy for you, but you’re in love with that barebones fabric top, Mazda’s MX-5 Miata Spyder Concept might be of interest to you. It’s also been lowered, fitted with bigger wheels, and a re-styled front fascia. No word if it has nylon loops instead of interior door handles, though. 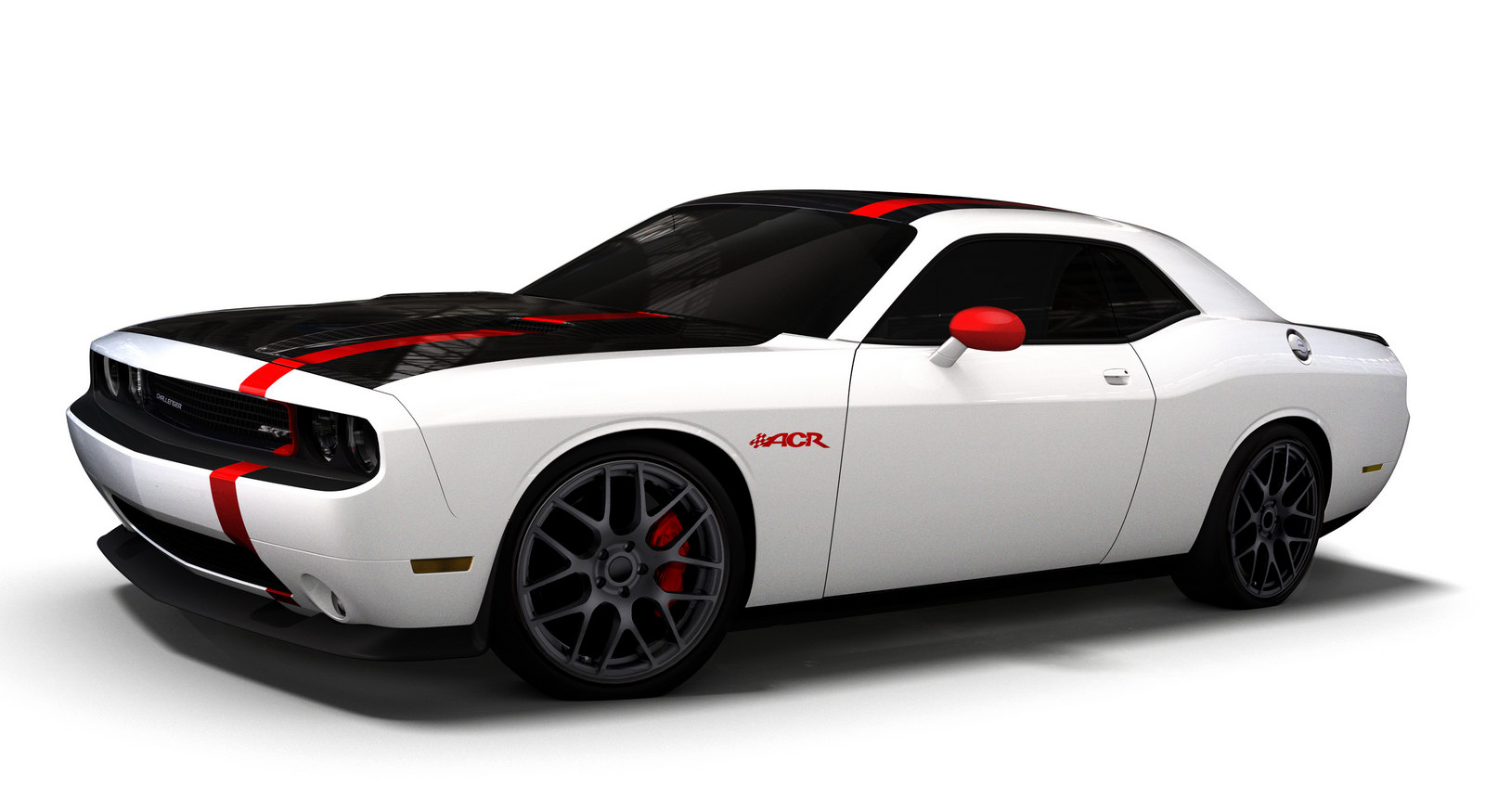 We love the current generation Dodge Challenger. Really, we do. But we can’t get past the fact it is a complete and utter fatass. Thankfully, Mopar has finally decided to do something about it. The Challenger ACR features a gutted interior, a bevy of carbon fiber bits, and some bits borrowed from the Challenger Drag Pack to shave some stones off the standard Challenger SRT8’s near-as-makes-no-difference two ton curb weight. It also has a stiffer suspension and better breathing for the 6.4L Hemi V8. Tasty. 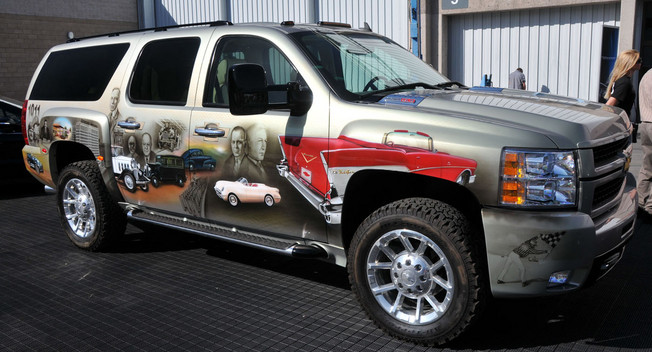 If you remember Chevy’s lineup from the 2007 SEMA Show, you’ll probably recognize this pickup-snouted Suburban. It wasn’t wearing this Chevrolet Centennial artwork then, of course, but the rest appears to be unchanged. So why is it on our list? Start adding everything up: Four-year-old concept SUV gets trotted back out. Stillborn 4.5L turbodiesel V8 (with mega-clever turbocharger and intake/exhaust port layout) still under the hood. Tighter government fuel economy regulations imminent. See where we’re going with this? 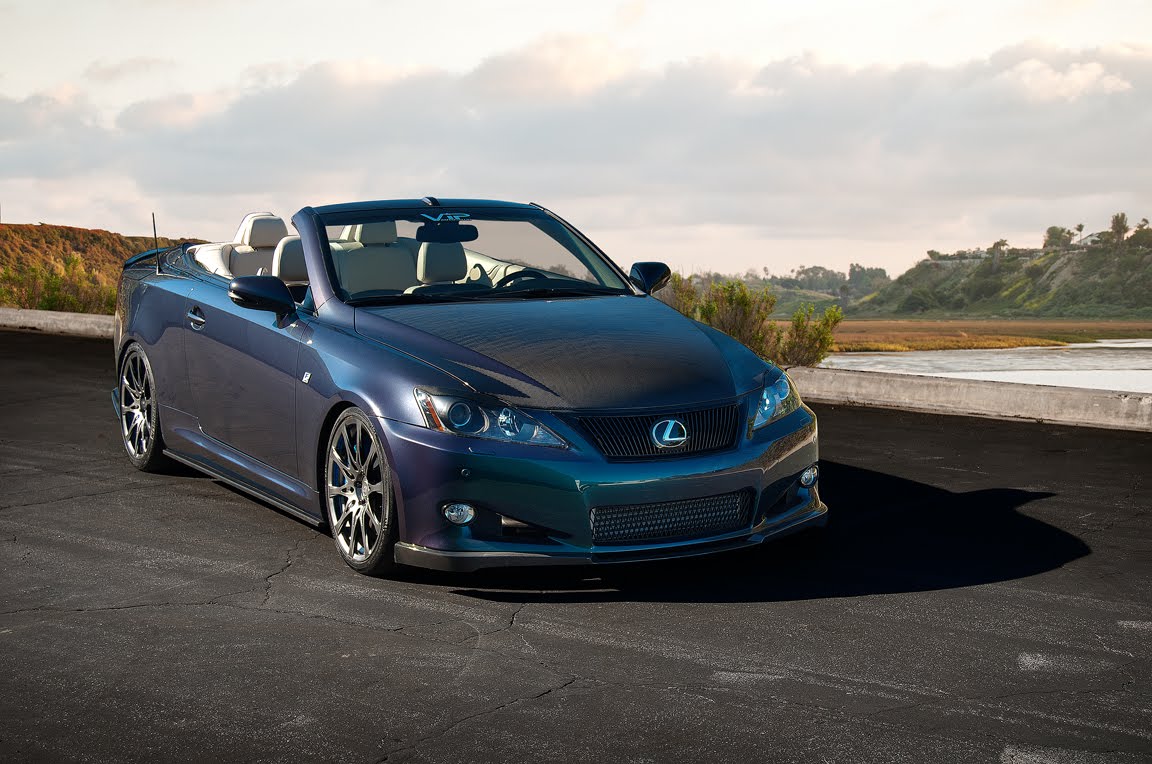 Finally, what are your feelings on the Lexus IS convertible? Pretty “meh,” right? Well, the gang at VIP Auto Salon wants to change that to “YOWZA!” Dig: This chameleon-painted IS350C has not only been endowed with a set of 19” wheels and a body kit, but also a thoroughly-reworked 3.5L V6 capped by a supercharger. With 386hp on tap, yours and your passengers’ hair dos don’t have a prayer.