Year after year, the automotive aftermarket manages to top itself. Tuner cars keep getting sharper-looking, more-powerful, more luxurious, and altogether more extraordinary compared to their showroom-standard counterparts. The year 2013 offered all sorts of vehicles of all shapes and sizes that received more style and more muscle, but some of those rides rose above the rest. Here, in the order that we featured them over the last 12 months, are the custom cars and SUVs that tickled our fancy. 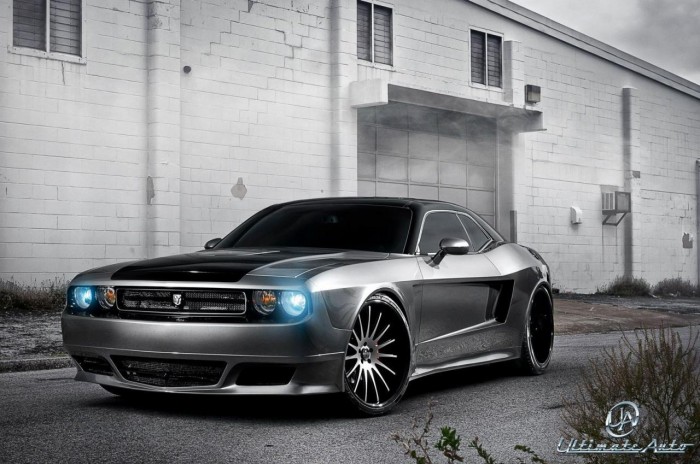 Although it’s generally considered to be the wallflower of the 21st century pony car wars, the Dodge Challenger is by no means a lame car. And the widebody Challenger from the shop of Florida-based Ultimate Auto is anything but lame. Yes, it’s got a wider stance (and stands on 24” Savini Forged wheels), but it kinda needs it. Why? Because the 6.1L Hemi V8 that lives behind the four round headlights gulps down air through a supercharger, that’s why. 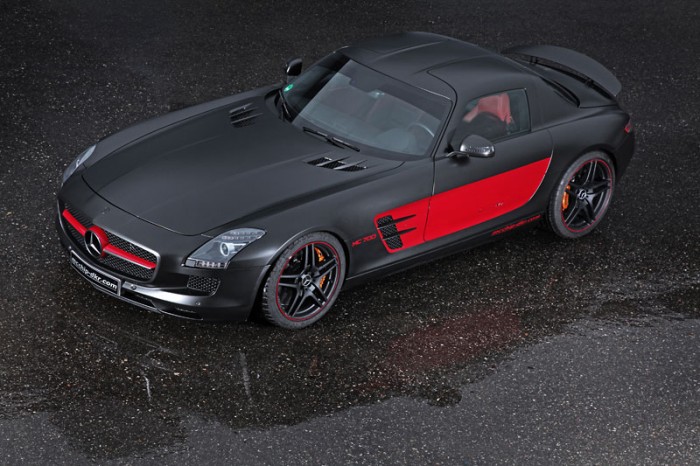 One of the first hotted-up supercars of 2013 was this demonic looking Mercedes-Benz SLS AMG from the German outfit Mcchip-dkr. Christened the MC700, this gullwing-door black-and-red rocket ship rocks the house with up to 696 horsepower and 585 lb.-ft of torque from a now-supercharged 6.2L V8. We’re not sure if it’s more badass or less badass than Mercedes-Benz’s own SLS AMG Black Series… 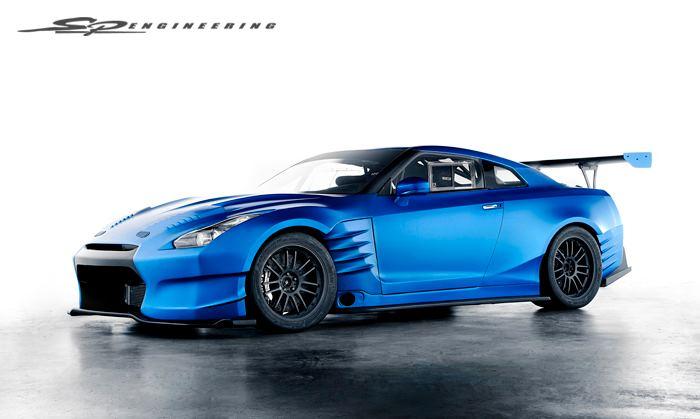 The Fast and Furious movies are, in case you didn’t get the memo, built upon a foundation of fast, custom cars. And one of the four-wheeled stars of 2013’s movie, Fast and Furious 6, is very fast and very custom. This Nissan GT-R resulted from a joint effort between R’s Tuning and SP Engineering, and it looks more-than-ready to attack the track. And with 800 horsepower from a Switzer Performance power kit on call, it definitely has as much go as it does show. 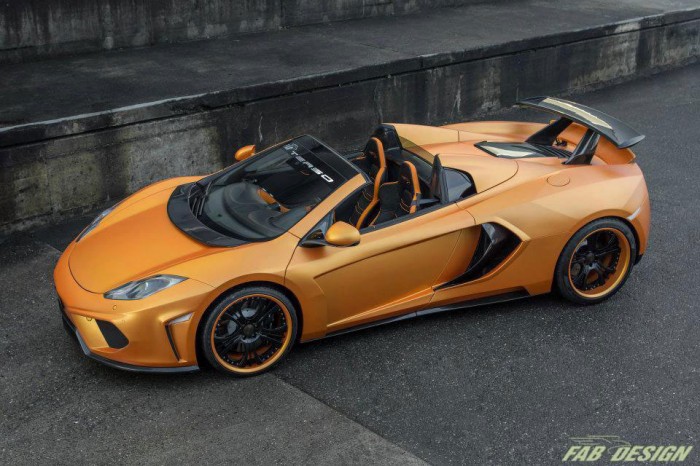 If the McLaren MP4-12C Spider is one of the best exotic convertibles on the market today, then FAB Design’s reinterpretation of it – dubbed the Terso – is one of the best tuned exotic convertibles on the market today. A bold body kit sharpens many of the 12C’s rather soft lines, while an ECU tune and sport exhaust system sharpens the 3.8L twin-turbo V8 to the point that it makes 671 horsepower and 527 lb.-ft of torque. FAB Design says that should be enough oomph to propel the Terso to 62 mph from a dead stop in three seconds flat and onward to a top speed of 213 mph. Did we mention it makes liberal use of the color orange inside and out? Well it does. 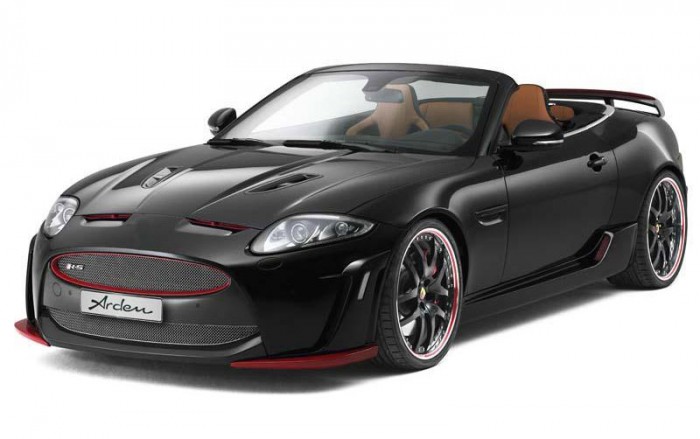 With the arrival of the F-Type, it would seem that the Jaguar XK’s days in the sports car sun are numbered, right? Not if the folks at Arden have say in the matter! They’ve added a suite of speed parts to an XKR-S Convertible (which is already a fairly fierce feline, what with 550 horsepower and all) to create something truly wicked. A somewhat subdued body kit, 21” wheels and the classic Jaguar “Leaper” hood ornament add malevolence to the exterior, while engine upgrades lift the supercharged 5.0L V8’s stats to 636 horsepower and 592 lb.-ft. If Arden can work this kind of magic with the XK, just imagine what it will do with the F-Type (particularly the R Coupe)… 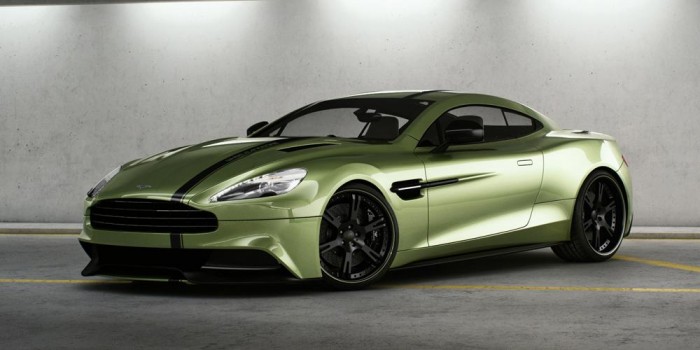 Historically, Aston Martin products haven’t gotten much love from the tuner world. As a result, Wheelsandmore’s decision to offer a different take on the new Aston Martin Vanquish goes against the grain. A lower ride height, new wheels, new paint and up to 613 horsepower and 523 lb.-ft from the melodious 5.9L V12 highlight the revisions made by the Wheelsandmore team. Hopefully this bad boy will inspire other tuners to jump on the Aston Martin bandwagon. 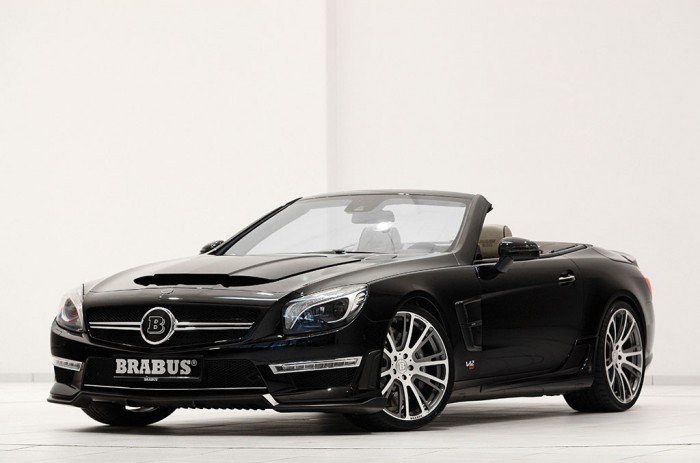 When we think of the Mercedes-Benz SL65 AMG, we picture a modern-day German Cobra that’s been to finishing school. When the Merc specialists at Brabus think of it, they picture an even more extreme hardtop roadster; specifically, they picture the Brabus 800 Roadster. Aside from fitting handsome alloy wheels and a jaunty body kit (which includes a functional ram air hood scoop), Brabus also drenches the interior in quilted leather and coaxes even more moxie out of the 6.0L bi-turbo V12, for new totals of 789 horsepower and 811 lb.-ft of torque (The engine could make 1,024 lb.-ft, but Brabus electronically limits it to prevent the transmission’s entrails from being liquefied.). Not surprisingly, acceleration (0-62 mph in 3.7 seconds) and top speed (217 mph) are rather good for a luxury convertible that weighs more than two tons. 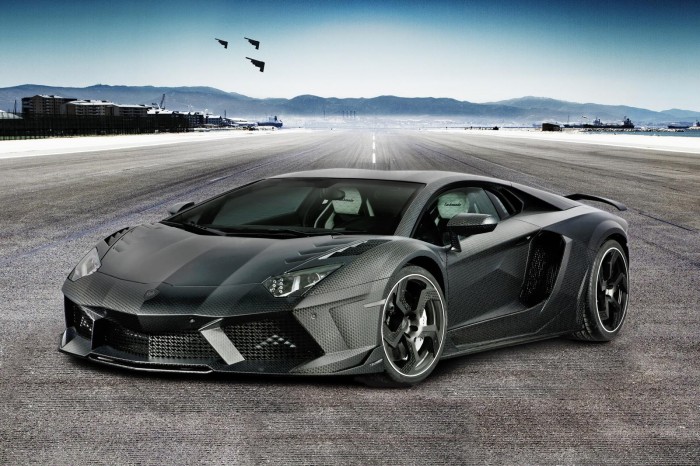 The stock Lamborghini Aventador isn’t exactly slow, or introverted. But that hasn’t stopped Mansory from taking the latest V12 Lamborghini to the extreme with an upgrade package they call Carbonado. The unpainted carbon fiber skin and ornate black-and-white interior are certainly attention-grabbing (and, unlike many previous Mansory creations, rather tasteful), but the big news resides under the hood. A twin turbo kit gooses the 6.5L V12 up to a claimed 1,233 horsepower. Mansory says that’s enough to lower the 0-62 mph time to 2.6 seconds, raise the top speed to 236 mph, and give anyone with an outtie belly button an innie. Okay, maybe that last one is an exaggeration. Then again, maybe it isn’t… 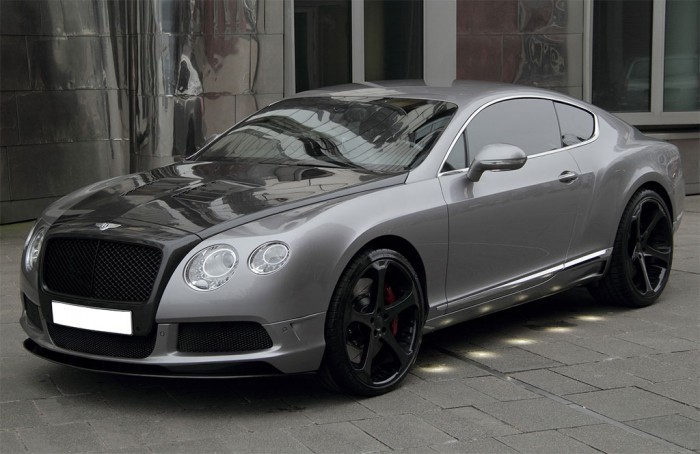 Anderson Germany delivered some good news for owners of the current-generation Bentley Continental GT in 2013. The company has come out with a super-subtle body kit (with some not-so-subtle under-rocker LEDs), 22” wheels, and even more ornate interior trimmings for the boffo British luxo coupe. But Anderson Germany doesn’t stop there; it also adds a suite of upgrades to the 6.0L twin-turbo W12 engine to raise output to 671 horsepower. You know, because the stock 12-cylinder Conti’s 0-60 mph in 4.3 second and 198 mph V-max are totally inadequate… 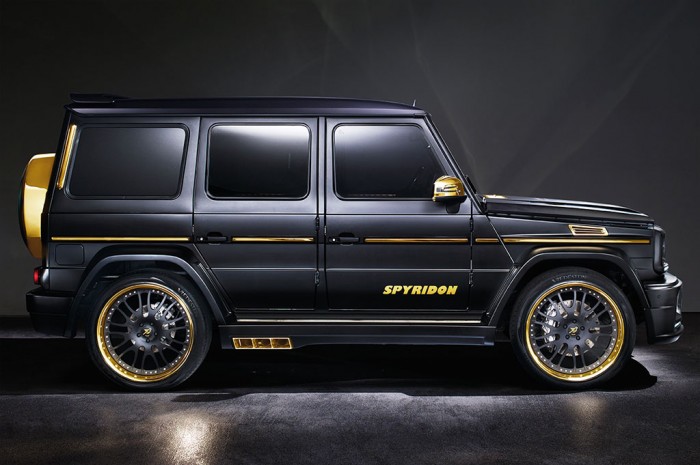 Time and time again we’re reminded of just how righteous vehicles finished in black with gold accents look. The Hamann Spyridon – based on the not-for-America Mercedes-Benz G65 AMG – is one of the most recent tuner cars to prove this rule, as it looks razor-sharp with its brutish widebody kit and monumental 24” wheels in addition to the aforementioned JPS-esque pigmentation. And in case all that isn’t enticing enough, it also has an upgraded 6.0L twin-turbo V12 that now makes 692 horsepower and 819 lb.-ft of torque. That will pin you into seats (which have gold inserts, by the way) something fierce. 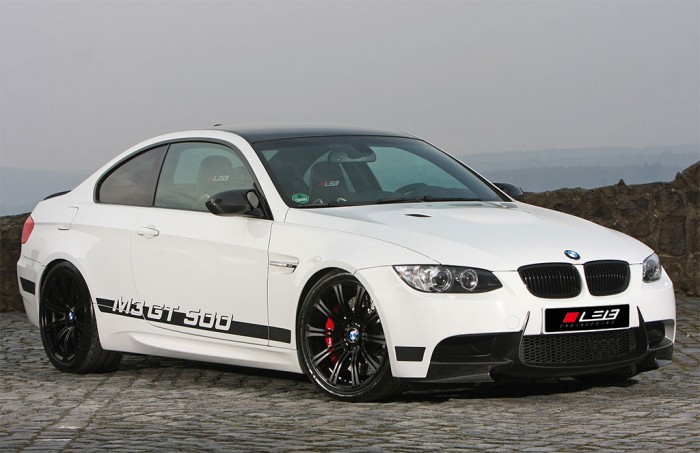 The E92 BMW M3 is one of the most tuned cars of the last half-decade, so Leib Engineering didn’t break a lot of new ground by crafting the GT 500. But the way they went about doing it is unusual in that this bespoke Bimmer isn’t fitted with an over-the-top body kit, too-nice-to-sit-in interior or a boosted-out-the-wazoo engine. No, this 494 horsepower machine could almost pass for something made by M GmbH itself, which is quite alright by us. 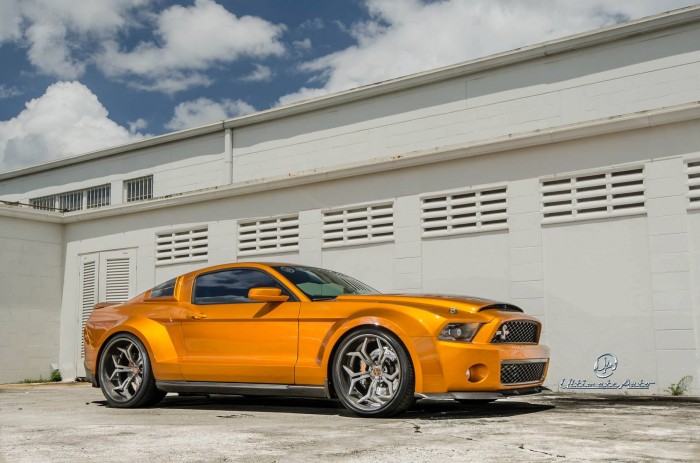 A custom Ford Mustang is hardly unusual, even in the case of the modern Shelby GT500s. But this tangerine treat of a GT500 Super Snake from Ultimate Auto stands out from the crowd, and not just for the vivacious hue. It also has jumbo fender flares tucking Vellano wheels, a bone-jiggling custom sound system, and Shelby American’s Super Snake upgrade kit, meaning the supercharged V8 underhood is now cranking out 850 horsepower. Yippee-ki-yay, Mustang lover. 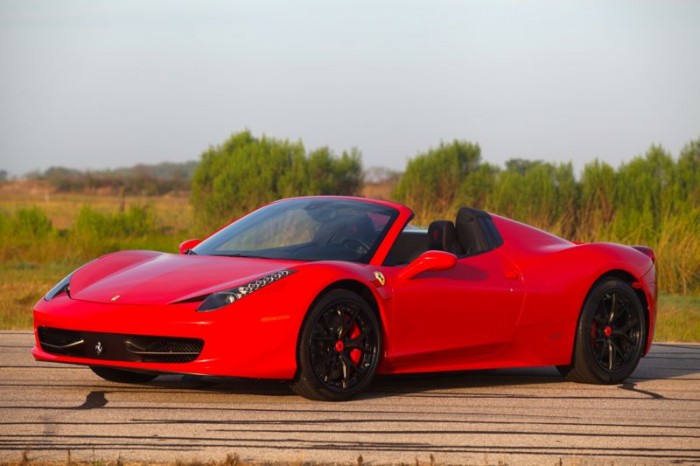 Hennessey’s twin-turbocharged Ferrari 458 Spider might not look all that different from a stock one, but the performance it dishes out is quite different. The pair of hairdryers feed the 4.5L V8 enough boost to let it make 700 horsepower. And the soundtrack is, not surprisingly, quite F40-like. 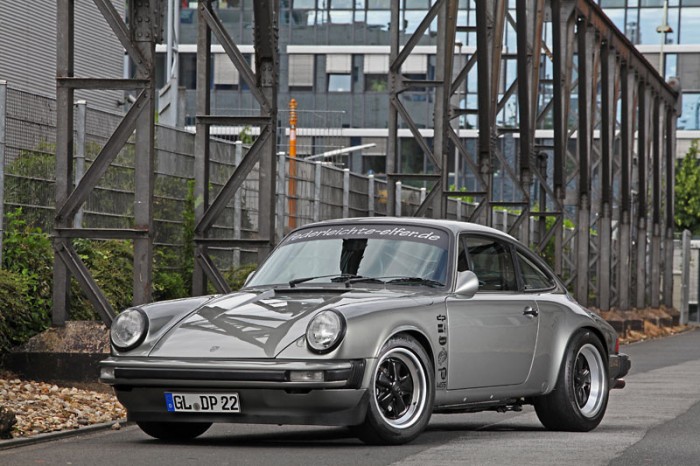 Late model Porsches get lots of love from the aftermarket these days, but not so much the older ones. DP Motorsport bucked that trend in 2013 with a rather tastefully hot-rodded Porsche 911 Carrera 3.2 from 1986. Called the 3.2 Sleeper by its maker, this Rock Green Metallic “G-Model” 911 is a bit more powerful (267 horsepower) and a whole lot lighter (1,995 lbs.) than it was when it left the Zuffenhausen factory all those years ago. And but for the sponsor stickers on the door and some other minor detail tweaks, it still looks like it did when it left the factory (hence the “Sleeper” name). We likey. 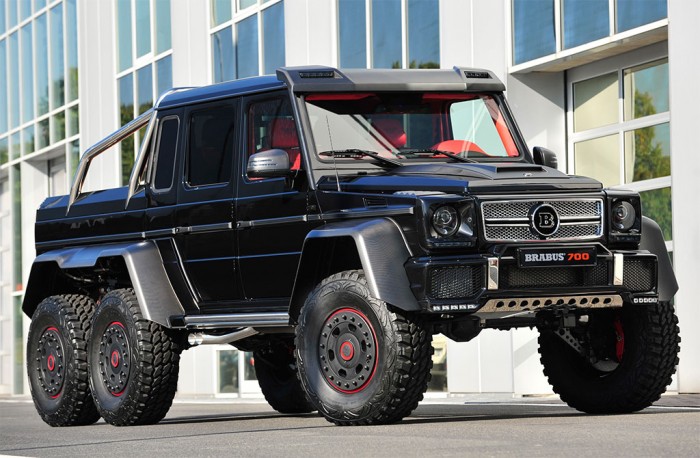 “Outrageous” doesn’t even begin to describe the Mercedes-Benz G63 AMG 6×6, so how would you describe one that’s been modified by Brabus? Well, whatever word or words you choose to use, it’s even got some new body bits, an even ritzier interior, and even more power from the 5.5L twin-turbo V8. Yes, it may be limited to 100 mph, but with 691 horsepower and 708 lb.-ft on offer, at least you’ll get there pretty quickly. 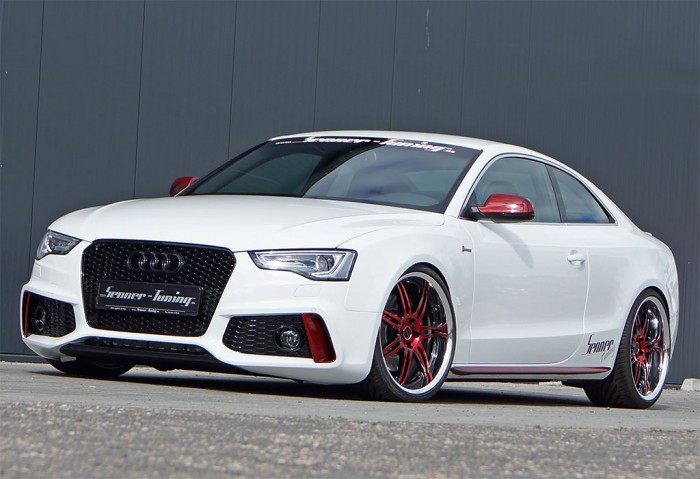 We love the looks of the Audi A5/S5/RS5 coupes, and Senner Tuning has managed to make the S5 look even sweeter by dropping the ride height and filling the fenders with 20” wheels from Work. It also spruces up the cabin with a cornucopia of carbon fiber, and infuses the supercharged 3.0L V6 under the bonnet with an extra helping of spunk. How much spunk are we talking about? Senner says the engine now makes 440 horsepower and 377 lb.-ft of torque. 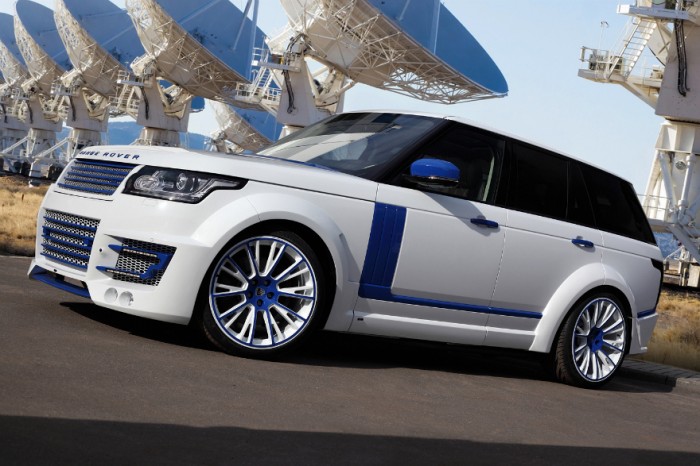 Land Rover’s latest rendition of the iconic Range Rover is quite the looker, but Lumma Design takes the British sport-ute’s swagger to the next level. Called the CLR R “Stormtrooper,” this white-and-blue brute features wider fenders stuffed full of color-matched wheels, plus new front and rear fascias and tinted windows and taillight lenses. In short, this baby is sure to draw a crowd in this or any other galaxy. 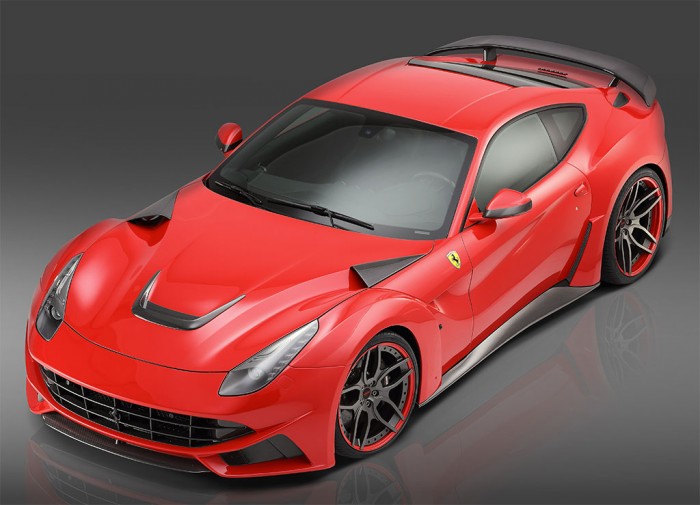 The Ferrari F12 Berlinetta is probably the most ferocious front-engine supercar you can buy, but that wasn’t enough for Novitec Rosso. Why else would the company have created the N-Largo tuning package? The boisterous body kit makes a strong first impression, but not as strong as the second impression made by the tweaks made to the 6.3L V12 under that big hood. Thanks to 770 horsepower and 533 lb.-ft of torque on tap, Novitec Rosso says this stampeding Italian stallion will reach 217 mph. 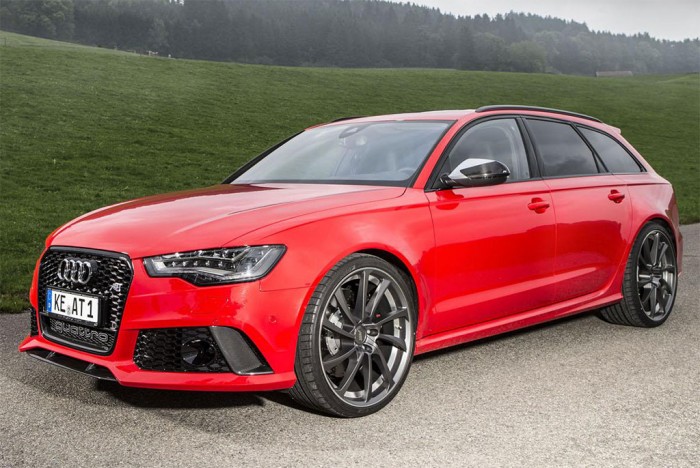 We’ve made it known on many occasions that we adore high performance station wagons. We’re especially fond of the latest Audi RS6 Avant which, like its predecessors, isn’t sold here in the U.S. The crew at ABT Sportsline is pretty fond of Audi’s latest hyperwagon, too. So fond, in fact, that it’s cooked up a tuning package that consists of some very understated new exterior trim, sweet 24” wheels, and a series of engine upgrades for the 4.0L twin-turbo V8 that ratchet its top figures up to 690 horsepower and 649 lb.-ft of torque. ABT says that’s sufficient for 0-62 mph runs in 3.4 seconds and an electronically-limited top speed of 200 mph.