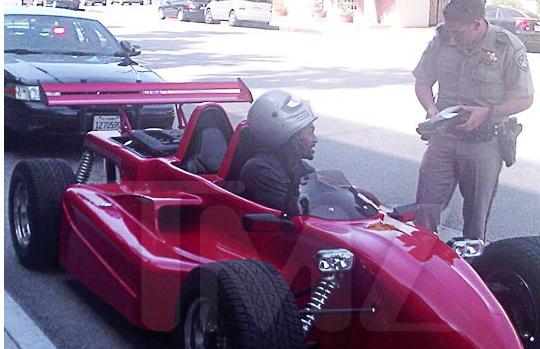 No matter the year, you can count on celebrity “news” stories every day. Every day. On rare occassion, those stories are substantive and flattering, but mostly they’re just all kinds of humiliating. Here are a few celebrities that are undoubtedly more than happy to welcome in the clean slate known as 2011. Because 2010 didn’t go so good for them and their cars. 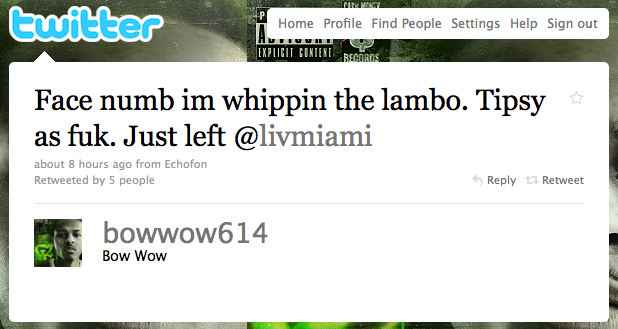 2010 had barely started when Bow Wow opened up a year of celebrity car boners. The man formerly known as Lil’ decided to get his drink on on New Year’s Eve before grabbing the wheel of his Lambo. Stupid, yes. But nothing that we haven’t seen dozens of times before. What we haven’t seen before is a celeb getting drunk, driving and then tweeting about it from his driver seat. He apologized later, but not until after this cat was out of the bag: “Im f**ked up!!! Ohhhh damn. Y i drive the lambo. Chris might have to drive after next spot.” That’s Chris as in Chris Brown. Not sure what Bow Wow’s worst decision of the night was. 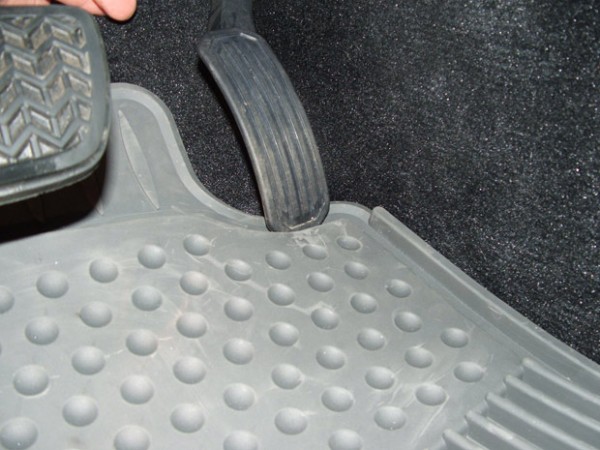 Before 2010, the world had never heard of James Sikes. But he became a celebrity of the most notorious distinction last March, when he was involved in one of the high-profile Toyota unintended acceleration issues. Sikes experienced the acceleration in his 2008 Prius on an interstate in the San Diego area and the California Highway Patrol eventually helped him to a stop. But later reports of indebtedness to Toyota, bankruptcy and fraud brought Sikes’ true motivations into question. Sikes’ 15 minutes were rather short.

Charlie Sheen: Over the Edge 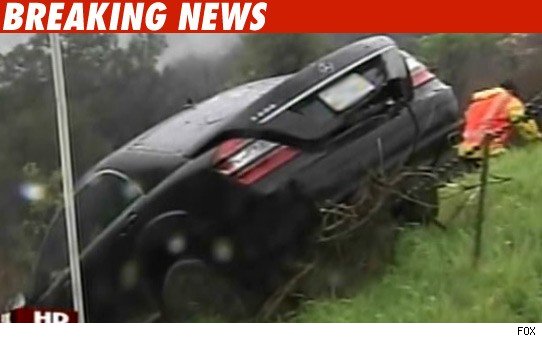 Usually karma is a force that works in silent, mysterious ways. But every once in a while, we get to see it in action. Charlie Sheen has never been the most likable celeb off the screen and some of his recent headlines have brought his douche stock to unprecedented levels. So we can’t really feel too bad when not one but two of Sheen’s cars are stolen and tossed off of the cliffs of Hollywood Hills—in two completely separate incidents in February and July. We can only smile and wink at karma. 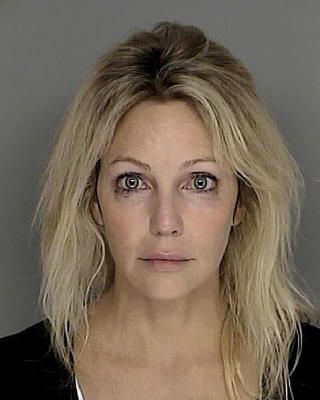 In April, Heather Locklear got into a bang-up with her BMW and was subsequently arrested for hit-and-run—on a “No Parking” sign. Apparently when you hit a sign, you’re supposed to tape a note with your name and phone number to it? Maybe not, because Locklear beat the charges. 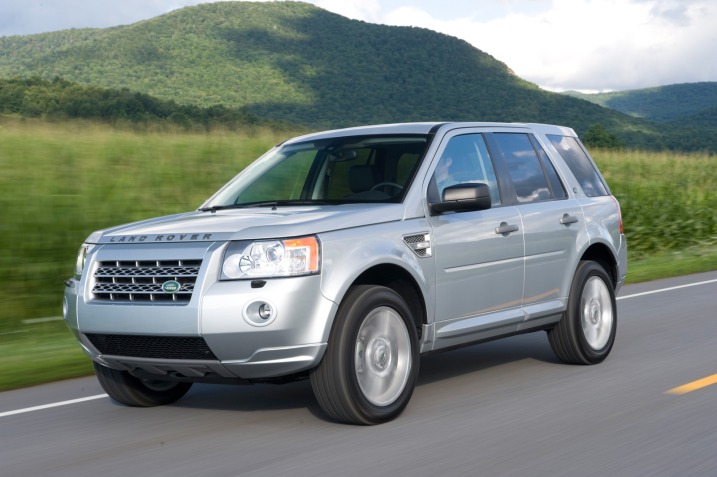 To most men, the sultry minx known best as Betty Draper can do no wrong. But the LAPD who responded to the scene after Jones barreled into three parked cars on June 10 with her Land Rover may see it differently. Not many accidents get a random celebrity cameo, but this one did: chef extraordinaire Bobby Flay stopped by after the crash and reportedly advised Jones to leave. Which she did before returning in fresh clothes and chewing gum, after it was alleged by witnesses that she reeked of alcohol. But the cops couldn’t charg her because there was no way of knowing if she guzzled some brews at home after the crash or during the revelry beforehand. 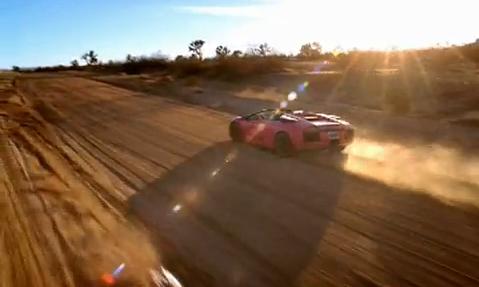 In early June, reports surfaced that an exotic car rental shop sued pop star Nicki Minaj for more than $15,000 worth of damage and payments on a rented, pink Lambo that the shop swore was driven off-road. As you can see, it was. The star that’s brought us modern classics like “F*** You Silly” and “Cuchi Shop” used the Lambo for her video “Massive Attack.” 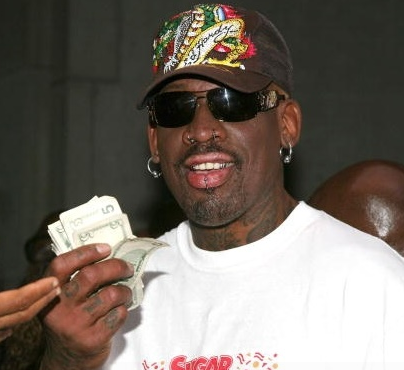 Dennis Rodman was involved in one of the worst crashes of the year, but the world’s favorite larger-than-life b-ball celeb walked away to tell the tale. In July, Rodman was in a Range Rover that flipped three times on Florida’s I-95 after popping a tire. The car was a wreck, but Rodman escaped with a few scratches. And in case you think that Rodman’s recent stint on Dr. Drew’s Celebrity Rehab had anything to do with it, he was the passenger.

Mel Gibson: Back in the Spotlight 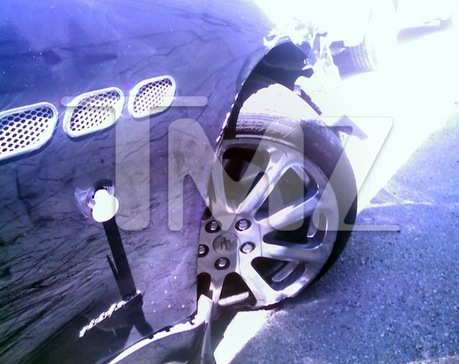 Mel Gibson’s August 15th accident was rather mundane as far as celeb crashes go, except for the two parties involved: a 2008 Maserati (nice!) and Gibson, who just can’t seem to get any positive (or neutral) press of late. Other than that, it sounds as though Gibson simply lost control of the car, careened into some rocks and wasn’t hurt. For once, alcohol wasn’t at fault for Gibson’s antics—apparently he just can’t drive so good. 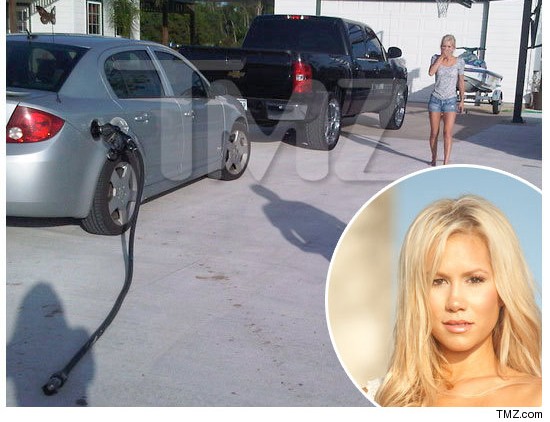 You know the old cliché about blondes? Well, it’s doubly true for blonde playmates. One such playmate named Kara Jo got a much more candid photo than she’s used to when she accidentally pulled the gas nozzle straight off the pump in September. Genius. 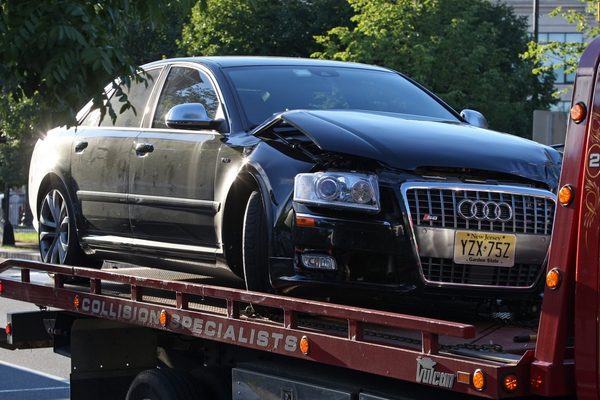 A few days before the start of his season, Tom Brady got smashed by a reckless driver running a red light. Now, I’m not the type of guy to wish harm to anyone, but couldn’t we have gotten a little hand injury? As it is, Tom walked away clean and the Patriots are headed to the playoffs at top seed. Had Brady been out for a month or two, who knows?

It didn’t take police too long to figure out that they’d have to pull Ron Artest over in early September—because he was driving in a bright red, oversized go-cart. The Eagle Roadster is apparently street legal—or street legal enough—because the police didn’t impound the car, opting to give Artest a citation for expired registration and send him on his way. 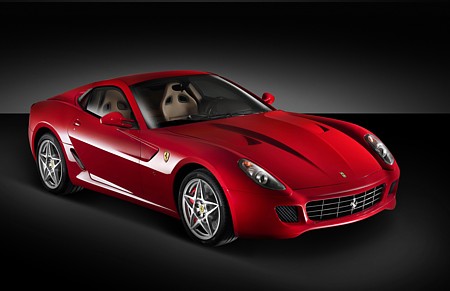 The fall wasn’t all that great for the LA Lakers–at least not on the street. The 7-foot center of the world champion Los Angeles Lakers is known more for his size and power than his speed, but on a sunny day in late-October, Bynum earned a reputation for high velocity. Only problem was, he was on the highway, not the court. Cops clocked the big man doing 110 mph in his Ferrari 599—double the speed limit. According to a TMZ report, the only reason he wasn’t arrested was because the traffic was light at the time. Oh yeah, and he’s a star basketball player on the pride of LA. 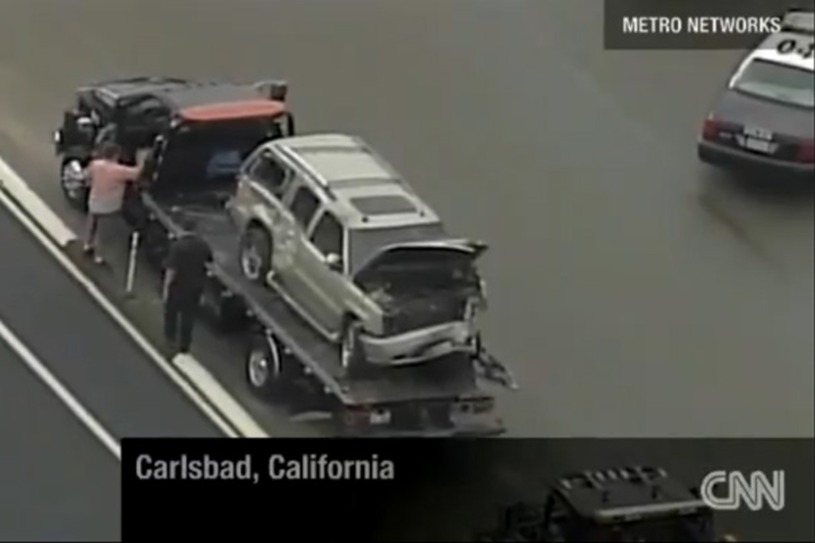 It didn’t take long for a former Patriot to join Brady in the list of 2010 celeb accidents. On October 18, after being arrested and released for domestic violence, former NFL Pro Bowler Junior Seau drove his Escalade off a cliff in Carlsbad, California. Don’t worry, Seau landed on the beach, walked away, beat the charges and he took some of his newfound luck to Vegas just a few weeks after the incident. 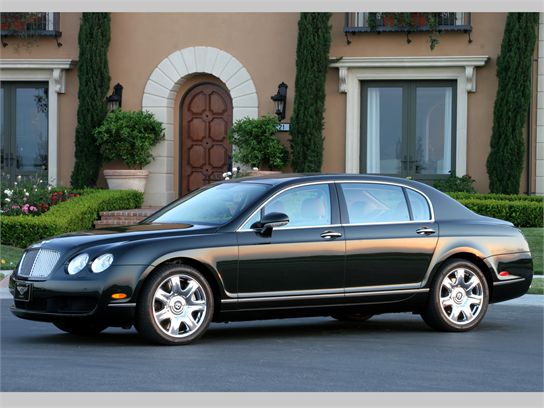 Axl Rose and a Bentley Flying Spur don’t seem like the likeliest of cohorts. Nor should they be. In October, word surfaced that Bentley was filing a lawsuit against Rose for missing payments, late return and all-out trashing of a 2006 Flying Spur that he had leased. He also drove it a few thousand miles over his lease terms and lost the original key. Rock on… 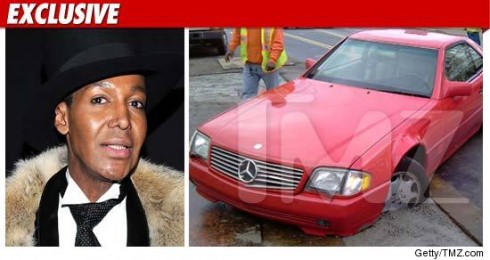 Now the average car guy probably has no idea who Dwight Ebanks is. And that’s because he’s a sassy, flamboyant fashion designer on Real Housewives of Atlanta—not exactly a household name. But his pre-Christmas Mercedes miscue is just strange enough to give him a starring role on this list. You see, Ebanks managed to drive his Mercedes right into to a pile of cement—wet cement. Ebanks reportedly saw the construction workers and cones, but assumed that the cement was covered with a metal grate that he’d just be able to drive over. It wasn’t. Not so fabulous now, huh?

Want more recent celeb car blunders? Be sure to follow TMZ’s “Ride Me” section for all the latest.