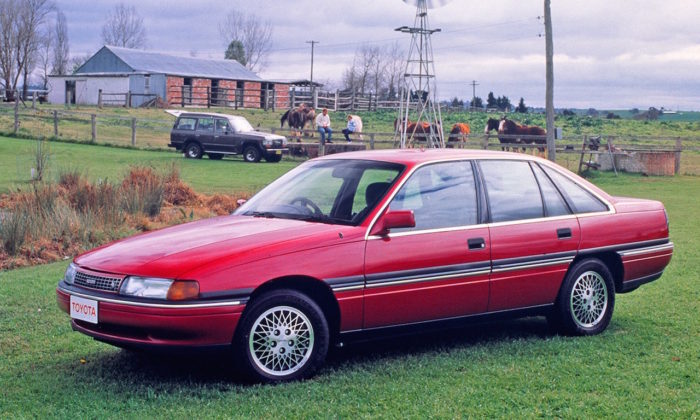 In the mid-1980s, the Australian government and auto industry formulated a plan to “right-size” local car production to improve supply chain efficiency and reduce redundancies, and open the market up to more imported cars. As part of the Button plan (named for John Button, the country’s Minister for Commerce Trade and Industry at the time), six manufacturers would pair up in a sort of vehicular cultural exchange program. When Toyota teamed with Holden, Holden got rebadged versions of the Corolla and Camry called Nova and Apollo, respectively (Fun fact: Those were the respective names given to the Chevy and Buick versions of the same American compact platform in the ‘70s.), while Toyota received the Lexcen, a rebadged version of the second generation (chassis codes VN through VS) Commodore sedan and wagon and named after Ben Lexcen, the designer of the Australian America’s Cup yacht that ended the USA’s 132-year(!) winning streak in that event.

Despite the patriotic name, tried-and-true Buick-descended 3.8L V6 (Alas, there were no factory V8 Lexcens…) and designed-for-Oz-by-Aussies Holden engineering, the Lexcen was always handily outsold by the fair dinkum original (though to be fair that was the case with pretty much every clone born out of the Button plan). Thus, when the all new VT-series Commodore arrived in 1998, it had no Toyota cousin.