The Top 10 Under-a-Liter Sports Cars of All Time

When most people think of sports cars, they probably think of two seats, maybe an open top, and stupendous agility. Of course, that agility tends to be compromised the larger and more powerful a sports car is. Thus, designers and engineers who are serious about giving their new machines genuine handling prowess put a lot of effort into reducing their weight.

And, as we all know, the lighter a vehicle is, the less power it needs to get moving and keep moving. So it’s only natural that many of history’s smallest sports cars were powered by engines displacing less than one liter (or 61 cubic inches for all you metric-phobes). But rather than try to list all of the sports cars that fit this criteria, we’ll instead tell you about 10 of the most iconic, most entertaining and, yes, cutest members of the under-1,000cc club. 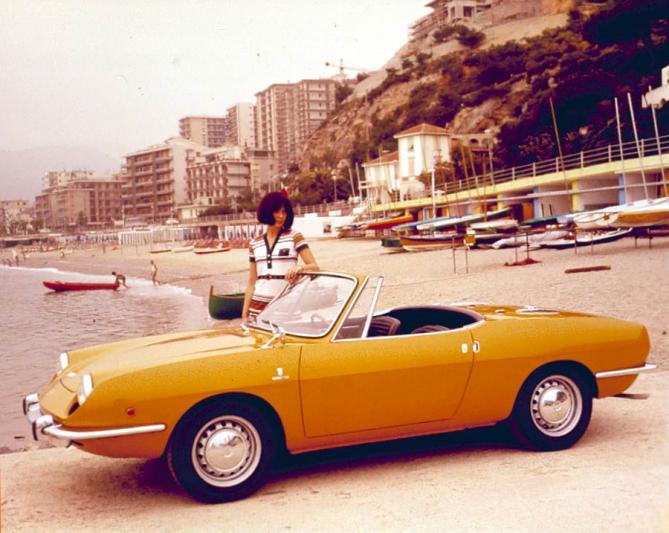 In the early 1960s, Fiat decided it needed a model line to slip between the tiny 500 and 600 and the midsize (by postwar Italy standards) 1100 and 1200. Fast forward to 1965, and the company introduced the 850 family with a rear-mounted, water-cooled 843cc inline-four (which was substituted with a higher-compression 817cc version on U.S. models so it could slide under emissions regulations governing engines 50 cubic inches and bigger). The initial model year offerings consisted of a two-door sedan, coupe, and two-seat Spider. The Spider made an extra two horsepower over its more sedate siblings, for a grand total of 49hp. Top speed was a claimed 90 mph, meaning this little barchetta had decent performance to go with its delightful Bertone styling. 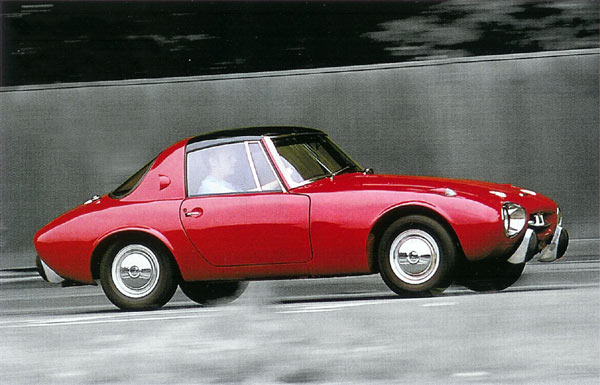 While many car geeks the world over are familiar with the Toyota 2000GT (a shapely two-seat grand tourer powered by a wailing Yamaha-designed 2.0L straight-six), not too many gaijin are acquainted with its little brother, the Sports 800. While the styling was heavily influenced by the 2000GT, the mechanics of Toyota’s starter sports car of the 1960s were far more humble; specifically, the powerplant was a 790cc air-cooled flat-twin developing 45hp. But with just 1,279 lbs. to push around, this little targa-topped (Porsche would actually coin the term in 1966, one year after the Sports 800 was introduced.) rollerskate can, in fact, get out of its own way. 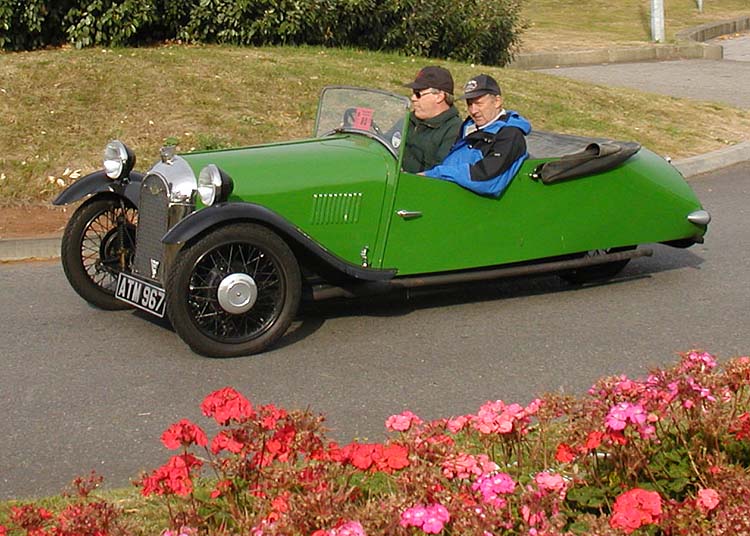 Before Morgan made the quantum leap into the world of four-wheeled cars in 1936, the British company’s stock and trade was three-wheeled cars. And one of the ultimate evolutions of Morgan’s trikes (at least until the arrival of the modern Threewheeler) was the F-4, introduced in 1932. Powered by the 933cc sidevalve inline-four from the British-built Ford Model Y, the F-4 provided motorists with an enticing combination of tax breaks afforded to motorcycles and three-wheeled cars, open air driving, impressive agility and, in a pinch (and we do mean pinch), seats for four. 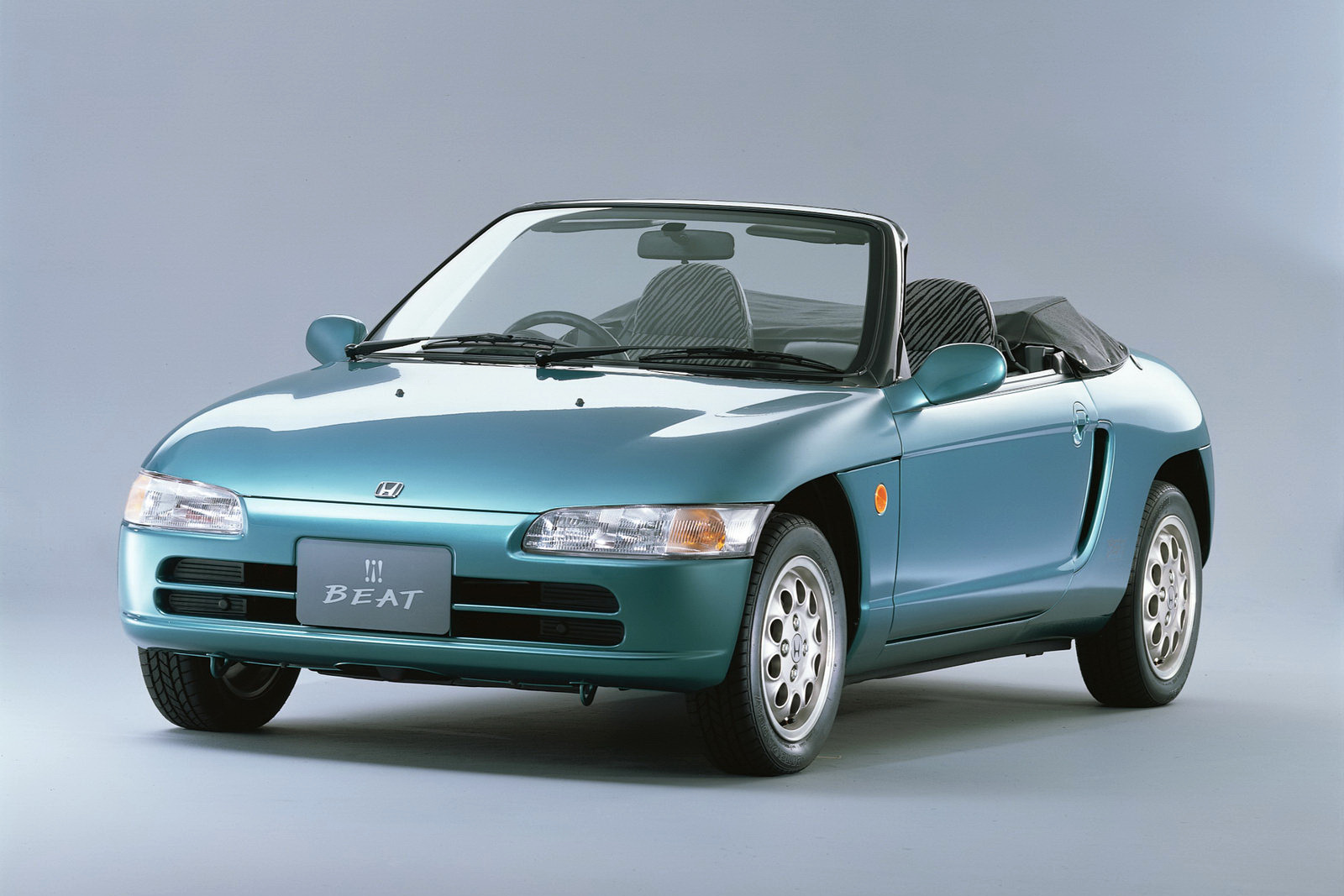 In 1990, the Japanese government rewrote the regulations for kei cars (sub-subcompact vehicles that entitle owners to various tax, insurance and registration benefits) to allow a maximum displacement of 660cc. Concurrently, Honda decided it was a good time to release a spiritual successor of sorts to the legendary S500, S600 and S800 roadsters and coupes of the ‘60s. But the car that resulted – the Beat – was as much a bite-sized NSX as it was an homage to those four-wheeled superbikes of yore. The mid-mounted 656cc triple was naturally-aspirated (uncommon among kei cars), yet still made the maximum-allowed 63hp. The Beat also holds the distinction of being the last car on which company founder Soichiro Honda put his stamp of approval, and his influence on the design and engineering is plain to see. 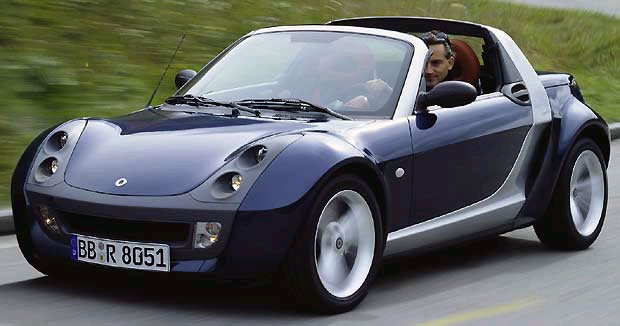 When the original Smart car was introduced in 1998, parent company Daimler-Benz (soon to be DaimlerChrysler) knew that the buzz surrounding the little urban runabout would only last for so long. In response, the company released the Roadster and Roadster Coupe in 2003. The platform was a lengthened version of the one underpinning what came to be called the ForTwo, and the same rear-mounted 698cc turbocharged triple (generating either 60hp or 81hp) and controversial 6-speed automated manual transmission resided under the trunk floor. A 99hp Brabus version was added later. Unfortunately, warranty claims for things like shorted-out ECUs due to water leaking in made the duo major money losers for Smart, leading the company to axe them in 2006. 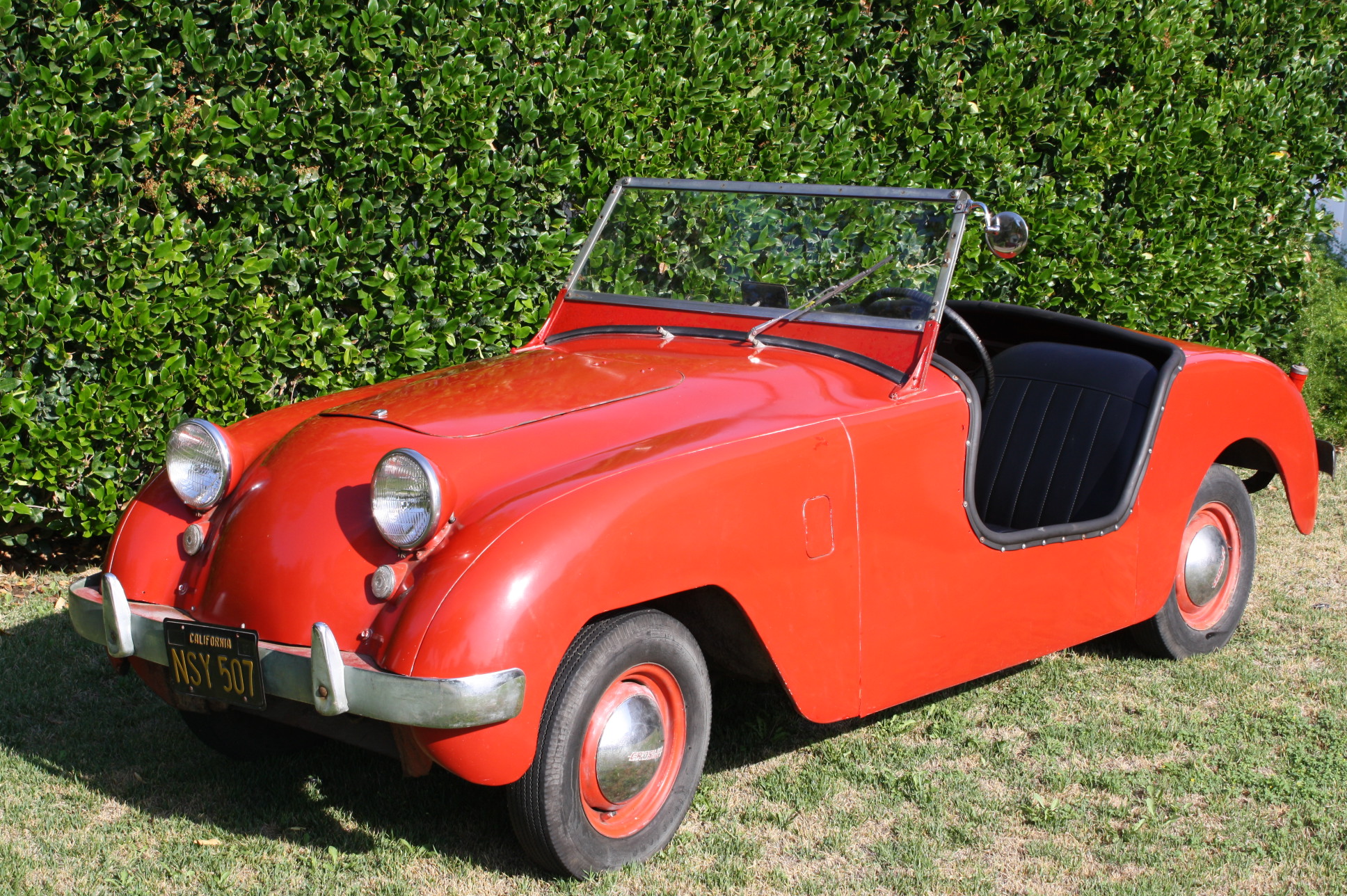 When you own a successful radio and home appliance manufacturing firm, multiple radio stations and a Major League Baseball team (the Cincinnati Reds), what other business ventures are left for you to establish? In the case of Powel Crosley, Jr., the answer was automobiles. But rather than building the big, burly cars American were used to in the pre- and post-WWII period, Crosley built a range of frugal subcompacts that would likely come out worse in a collision with an O.G. Fiat 500 or Mini. And in addition to the two-door sedans, two-door convertible sedans, two-door wagons and pickup trucks, the company also built a pair of two-seat roadsters, the Super Sport (which featured doors) and the Hotshot (which did not) starting in 1949. Like all Crosley cars, the roadsters were powered by the company’s groundbreaking 724cc SOHC inline-four, which produced 26.5 (Don’t forget the .5!) horsepower. Combine that with super low weight and four-wheel disc brakes (In 1949!), and it’s no surprise the Hotshot cleaned house in small-displacement sports car racing. 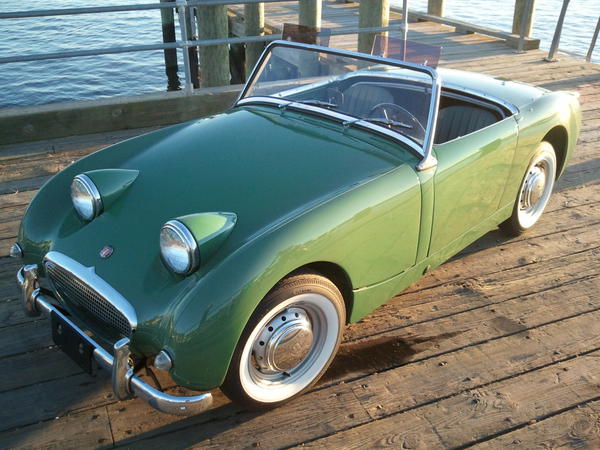 The original Austin-Healey sports cars of the ‘50s gave British Motor Corporation and Donald Healey Motor Company licenses to print money, so brisk were sales (particularly in this country). But as the Healeys grew in size, seating capacity and cylinder count, the opportunity to create a subcompact starter model arose. That starter model was the Austin-Healey Sprite, introduced in 1958. Yes, the first generation Sprite had a 43hp version of Austin’s 948cc A-Series inline-four, and it was the first mass-produced unibody sports car. But the thing that most people remember about the Mark 1 Sprite? That would be the freaky-but-cute front end design, which earned the car the “Frogeye” nickname in the home market and “Bugeye” over here. 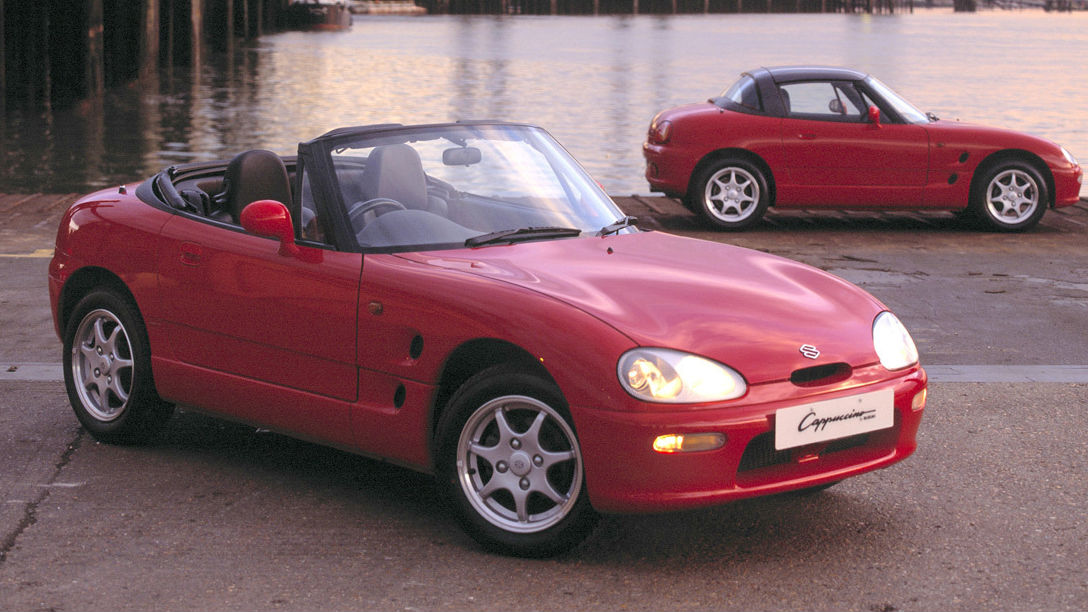 Not about to let the Beat have the open, two-seat kei car market to itself, Suzuki began rolling the Cappuccino into its Japanese showrooms in 1991, the same year the Beat debuted. The Cappuccino, however, featured a more conventional front-engine, rear-drive layout, and a turbocharged engine (a 657cc triple rated at 63hp) that was more in keeping with most other kei car offerings. What wasn’t conventional was the top: The two-piece targa roof could be removed and stowed in the trunk, while the B-pillar/roll hoop/back window assembly rotated downward and out of sight. It’s about as close as Suzuki has come to building a four-wheeled sportbike for public consumption. 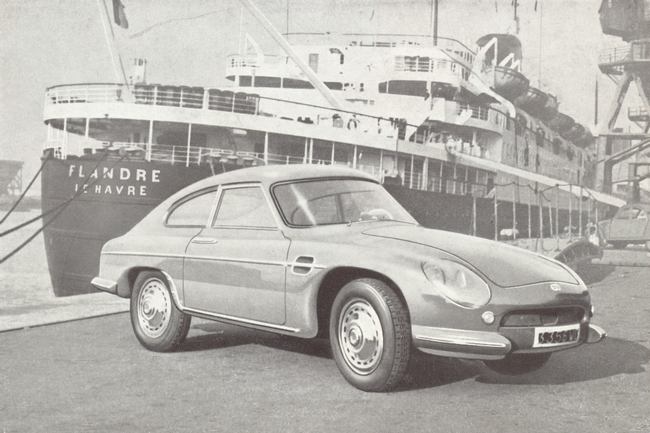 When plans to get French racing drivers and engineers Charles Deutsch and René Bonnet a ride in the 1936 French Grand Prix for sports cars fell through, they decided to build their own sports car. Two years later, the DB1 hit the track, and Deutsch-Bonnet (shortened to DB in 1947) was on its way to making small-displacement racing and road car history. One of the firm’s most successful and most iconic models was the HBR-5. The Panhard-sourced 851cc air-cooled flat-twin turned the front wheels and didn’t make a whole lot of power, but the slippery Deutsch-designed coupe body allowed the car to reach staggering top speeds. Like many other DBs, the HBR-5 was the car to beat in small-displacement sports car racing classes around the world. 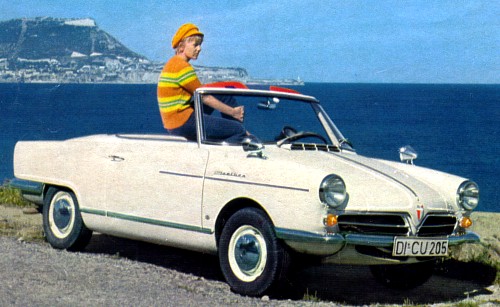 Before Mazda started producing rotary-powered cars, German independent NSU introduced the automotive world to Felix Wankel’s pistonless wonder in 1964 with the Spider. Powered by a rear-mounted, water-cooled single-rotor powerplant measuring in at 498cc, the Spider was rated at a respectable 50hp (later 54hp) though, like every other car on this list, it was much better at turning and stopping than it was at accelerating. Unfortunately, NSU descended into financial ruin on the back of warranty claims and working to improve the rotary engine to the point where it would reduce said warranty claims (something the second company to introduce a Wankel powered production car, Mazda, managed to do quite well). The company was finally purchased by Volkswagen in 1969 and merged with Auto Union to form the present incarnation of Audi.
These may not be the most obvious cheap cars but you can still try and hunt them down.
Tweet1
Share13
Share
Pin109
123 Shares
Categories
Lists
Tagged
Austin HealeyClassicsCompactCrosleyDBFiatHondaKei CarListsMorganNSURoadsterSmart Carsports carSuzukiTop 10 ListsToyota
0
Back to Top