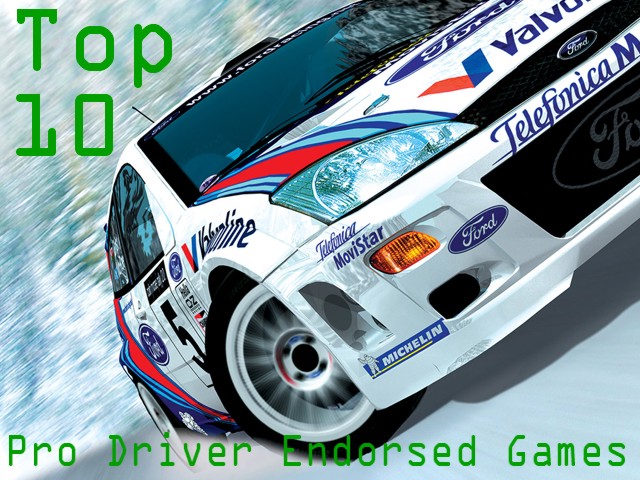 One of the best ways to sell a racing video game (aside from taut controls, gorgeous graphics and a great selection of vehicles and tracks) is to get a professional racing driver to attach his or her name to the game’s title, if not be involved in the actual development process. In the late 1980s, this trend really started taking off, as some of the best and brightest from IndyCar, NASCAR, Formula 1 and elsewhere lent their monikers and likenesses to numerous arcade and console games.
Of course, some of you might be too young to remember some of these games, as well as the drivers behind them. Well, this is your lucky day, young ‘uns, because we’ve put together the following list of ten classic racing games with pro drivers’ stamps of approval. And as an added bonus, each one is accompanied by a gameplay clip, so you can see these titles in action.

For a former lumberjack and New York City cabbie, Danny Sullivan has done okay. Author of the famous "spin and win" in the 1985 Indianapolis 500 and guest star on, among other things, Miami Vice and All My Children, the Louisville native was practically a household name by the late 1980s. So it's no surprise that Leland Corporation (a precursor of Midway Games) hitched its wagon to Sullivan's star when developing its Indy Heat arcade game. Featuring simplified, 2D representations of many of the tracks that were on the CART Indycar schedule in the late-'80s and early-'90s. The later ports for the Nintendo Entertainment System, Commodore Amiga and Atari ST did away with the arcade cabinet's steering wheels and pedals, but kept much of the rest.

When it comes to off road racing, few drivers are more recognizable than Ivan "Ironman" Stewart. Stewart and his factory-backed Toyota pickups were incredibly hard to beat, both in the open deserts of the American Southwest and Baja, and in the Mickey Thompson Stadium Series. The game, Ivan "Ironman" Stewart's Super Off Road, was loosely based on the latter series, with the addition of whimsical variables like water hazards and nitro boost. Like many games of the era, this title later made the jump from arcade units to home consoles.

In addition to holding NASCAR's all time speed record and being voted the sport's most popular driver 16 times, Bill Elliott also holds the distinction of having his name on the first video game to be officially licensed by NASCAR. Initially, it was only available for MS-DOS PCs, though NES and Amiga versions were released a year later in 1991. However, these ports lacked half the tracks, the instant replay function, and the advanced-for-the-time graphics of the PC version. Regardless of platform, Bill Elliott's NASCAR Challenge brought this heretofore Dixieland sport to a national (if not global) audience.

In the mid-'90s, the highest profile driver in the World Rally Championship was arguably Scotland's Colin McRae. His win-or-wad-it-up-into-a-ball-trying-to-do-so approach earned him plenty of fans and detractors, so it was a given that a rallying game with his name on it would garner a lot of attention. It didn't hurt that the Codemasters developed and published title had a great variety of cars and tracks, something that remains to this day in the Dirt series of games, which is what the series was renamed on a global basis a couple of years after the 2007 death of McRae in a helicopter crash.

After many near-misses, England's Nigel Mansell finally won the Formula 1 World Championship in 1992. This was highly fortuitous, as 1992 was also the year Gremlin Graphics began releasing Nigel Mansell's World Championship Racing for a variety of consoles. As with most F1 games of the period, all the tracks of the 1992 season were present; unlike most titles, however, many of the top drivers like Ayrton Senna, Gerhard Berger and Michael Schumacher appeared in the game in addition to Mansell. A great parting gift to F1 fans as "Our Nige" departed for Indycar in 1993.

Visually, Formula 1 cars and Indy cars of the 1980s were extremely similar. This was fortunate for video game developers and publishers, as it made it a little easier for software designed around Formula 1 to be marketed in the U.S. by an Indycar driver. Such was the case with Human Entertainment's single-seater game. It was first released in Japan as Nakajima Satoru: F1 Hero (Satoru Nakajima being the most prolific Japanese F1 driver of the '80s), but came to the U.S. for the NES in 1990 as Michael Andretti's World GP. Yes, this version of the game featured a Lola-Chevrolet Indycar similar to the one Andretti drove at that time, but all the tracks were from F1 (though the Detroit GP had become a CART race by then). Still, as we can tell you from personal experience, it's a mighty fun game.

The mid- to late-'90s saw Codemasters release TOCA and TOCA 2, which were the official games of the British Touring Car Championship. TOCA World Touring Cars was also an official BTCC game, though that championship was not represented in the game. That was odd, but nowhere near as odd as the deal that brought the game to the U.S.: For our market, it was renamed Jarrett & Labonte Stock Car Racing, as in Jason Jarrett and Justin Labonte (sons of former NASCAR champions Dale Jarrett and Terry Labonte). Jason's grandpa (and NASCAR legend) Ned Jarrett handled voiceover duties. Certainly, production-based sedans competing on famous road and street courses around the world doesn't exactly fit the American definition of "stock car racing," but that doesn't mean it was a lousy game; far from it, in fact. And how many other games let you flog a race-modified Lincoln LS around Bathurst? Hint: The answer is between 1 and -1.

Not about to let fellow Briton and World Rally champion Colin McRae have a monopoly on the eponymous video game market, England's Richard Burns and developer Warthog Games began work on Richard Burns Rally not that long after Burns' title-winning 2001 season. Unfortunately, by the time the game was released in the fall of 2004, Burns was already quite ill from a brain tumor that would ultimately take his life just over a year later. But part of his legacy was a spectacular game, to this day regarded by many to be the most realistic rally sim yet made. And thanks to an active modding community for the PC version, it's perpetually fresh.

Rare is the racing driver who has won in as many different disciplines as Mario Andretti. So it was only fitting that he teamed up with Electronic Arts to create Mario Andretti's Racing Challenge for the PC in 1991, arguably the most ambitious racing game ever made up to that time. In many respects mirroring Mario's own career, players started out having to acquire the sponsorship needed to buy a sprint car, working their way up through dirt modifieds, stock cars, sports prototypes, Indycars and Formula 1. Some of the world's best recognized tracks (and some not-so-well-known dirt bullrings) were included and, like everything else, rendered in remarkable detail. Just think how epic a game like this would be on 2012 hardware…

Finally, there have been plenty of futuristic racing games made over the years, but only one has had a pro driver's name in the title. Jeff Gordon XS Racing (released in 1999) featured self-healing cars, and up to 40 cars (including the player) on track at a time. The tracks are wild, full of jumps and crossovers, though Mr. Gordon gives you a quick primer for each one before your first run on it. All-in-all, an amusing (and addictive) game.
Tweet
Share
Share
Pin
0 Shares
Categories
Gaming
Tagged
Classic GamesListsMotorsportsplaystationTop 10 ListsVideo GamesXBOX
0
Back to Top