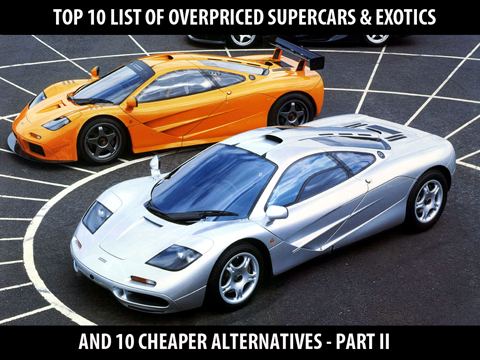 AskMen recently wrote an article discussing the top 10 supercars that should be more afforbable. We have our take on this discussion and this is the second installment. Even though the cars they identified should be cheaper, they aren’t. And so, we have added our two-cents and sought to find suitable alternatives that will save you a little money and still have you riding in style.

The other day we counted down from number 10 to number 6 and today we wind it down to number 1. As promised, the sports cars get more expensive and the recommendations a little more far out. It’s always cool to review exotic cars, and as stated before, even though we are making recommendations on more affordable options, any one of these vehicles would provide the ride of a lifetime. So, check out the list below with some of the most expensive supercars on the market today and some advice that just might save you enough money on the side to buy an extra car or four if you’ve got big bank. 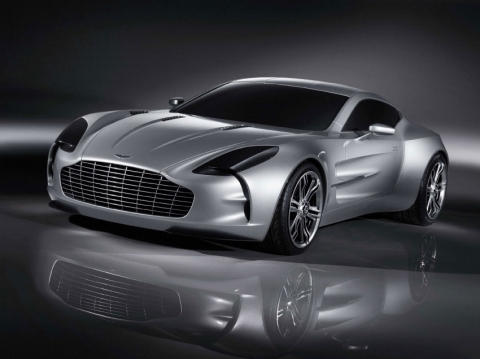 Why try to be like Bond with an Aston Martin DBS when you can better him in a One-77? It could add even more 007-like charm, sophistication and excessive carnal activity to your life — areas you want to improve anyhow. One-upmanship comes at a stiff cost, though, and the One-77 drops in among supercars that should be affordable. All the exclusivity and bespoke fiddling by Aston can’t fill the $1.5 million or so gap between the One-77 and the $266,350 DBS. Maybe being just like Bond isn’t so bad after all.

What the price should be: We understand the exclusivity of the One-77, but isn’t owning one good enough? Why do you have to pay millions? Put the price just above a DBS and make a limited number of them and you’ll still be the coolest kid on the block for buying one, without having to sell your house, car, kidney, and first-born child to afford it. 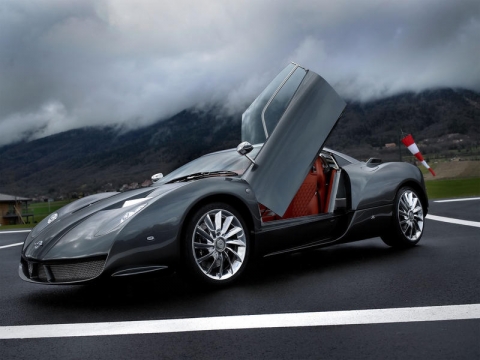 There is no doubt that the Aston Martin One-77 is one bad mofo. The car sports a 7.3-liter naturally aspirated V12 engine producing 700+ bhp making it capable of 3.5 second sprints from 0 to 60 mph. It has all the fit and finish you would expect from Aston Martin plus some additional niceties. And there’s always the rarity factory because they are only producing 77 units. But that said, if you are looking to save a few bucks and get an outstanding automobile that will turn heads and slow traffic to a crawl, we recommend the Spyker C12 Zagato. For $644,000 you get a car good for 3.8 second 0-60 times in a package that is as far out and high-design as you will ever see on the road today. This is a showroom quality car that begs to be driven and screams for attention. Total savings = $1,106,000 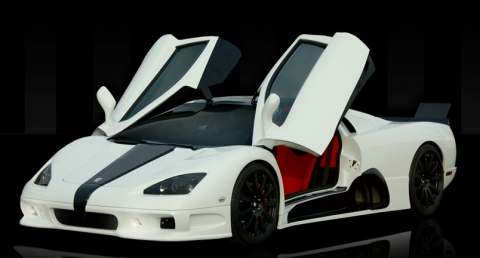 So you long for a supercar, yet your patriotism demands your dollars stay here in the U.S. of A? We’ll bet you wish you could try a Shelby, as in Shelby Super Cars. Their SSC Ultimate Aero snagged the Guinness World Record for top production car speed (255.83 mph), which appeals to both the patriot and velocity junkie in us all. Fit, finish and interior appointments are not yet record-setting, but we have high hopes, especially with an electric version of the Aero said to be on the way.

What the price should be: $260,000. Just a little bit more expensive than the recently reduced SLR as it is the “fastest” production car on the road it deserves a little recognition, no? 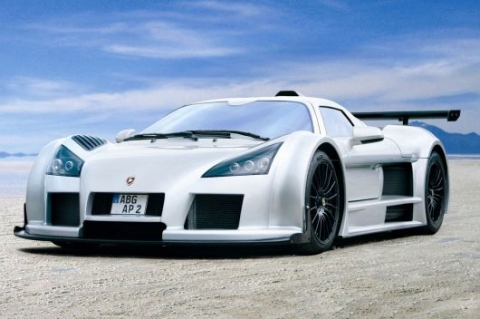 We’re all for patriotism, but when it comes to cars we sometimes can’t help but stray from our home soil. That’s why we would have to opt for the Gumpert Apollo if we wanted to stay below the $500k mark and still get a track master. This is a 2,600 pound street legal race car with engine options that include the base twin-turbo V8 with 650 bhp, the sport version with 690 bhp and the race version with 790 bhp. In any case, this is a car that can run from 0-62 mph in 2.7 seconds and reach 120 mph in 2.9 seconds. It’s also quite rare with only 25 built in 2009. Total savings = $173,000 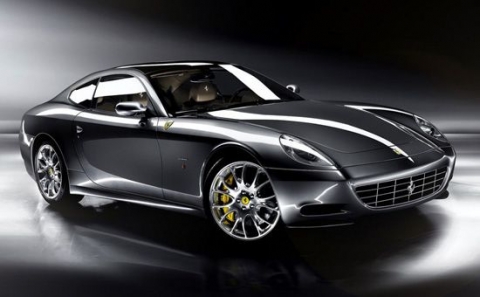 To answer your first question: Why not the Enzo? Simple: Eddie Griffin has inadvertently adjusted supply and demand, further skewing prices. The 612 Scaglietti is our Ferrari supercar that should be affordable. Every halfway decent guy deserves to experience a V12 Ferrari sometime, and the 612 means he can bring his wife and two kids along. But look at the thing: not a stunner, to say it diplomatically. Based on looks alone, this Ferrari should have its price adjusted accordingly.

What the price should be: $130,000. The 911 Turbo is so much prettier than this Ferrari, but we’ll give the Scaglietti the benefit of the doubt with its V12 and keep the prices even. 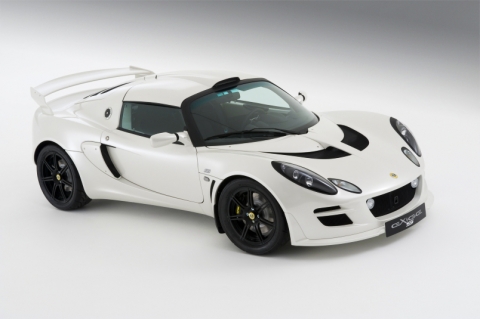 The 911 Turbo is a great car but it’s not a Ferrari. The Scaglietti is a Ferrari but it’s the ugly duckling and dark horse of the family. So what’s one to do? Let’s explore… The Scaglietti does feature a V-12 engine good for 533 hp and a 0-60 mph time of 4.2 seconds. But this is 5/10ths of a seconds slower than the Porsche. The Scaglietti features Ferrari’s F1 SuperFast automated manual paddle-shift transmission along with carbon ceramic brakes standard. However, the Porsche can be outfitted with the same type of brakes and has a Tiptronic S transmission that is absolutely phenomenal. So, we agree with AskMen’s assessment but would like to pose an alternative— why not just go with a Lotus Exige S260? For $75,000 you get a 4 second car with amazing handling that certainly has that “wow” factor. It’s definitely not as luxurious as the Ferrari but after 10 minutes of driving it you won’t care. Total savings = $240,000. 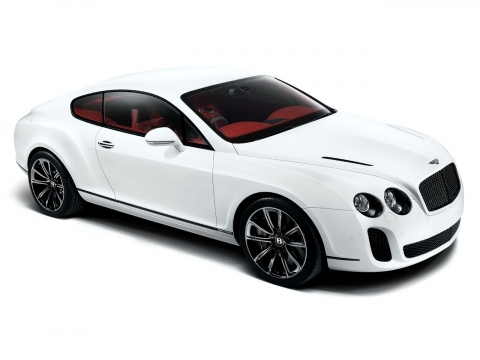 We’ve always liked green cars in theory, less so with their packaging and the trade-offs. Suddenly, there’s one that makes us want to hug trees until we’re riddled with splinters: the Bentley Continental Supersports. So like the aforementioned Koenigsegg CCXR, the green aspect here is limited to the ability to burn E85 ethanol. Still, it’s a start. It’s also another of the supercars that should be affordable. While the enhancements are commendable, the price of going environmentally friendly in your Bentley is expected to be about $70,000 over a standard Continental GT.

What the price should be: $150,000. It’s saving the planet, come on! Why should you have to plod along in a smart or Prius when you can rocket by in one of these? Wouldn’t we save the planet a bit more quickly behind the wheel of a Bentley? We’d like to think so. 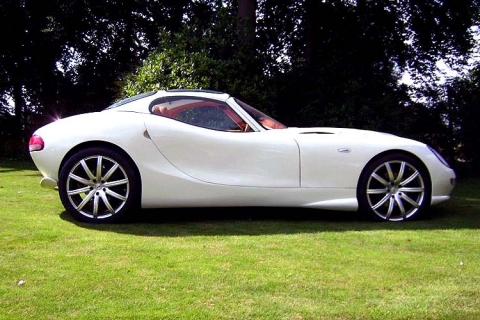 Biodiesel is very popular right now and rightfully so. Not only can you squeeze out more horsepower from flex-fuel engines when using ethanol, but arguably you are helping Mother Earth as well. We’d like to recommend the Trident Iceni instead of the Bentley. You get a car that can reach 200 mph, hit 0-60 in under 4 seconds and drive 100 miles per gallon all for about $85,000. Total savings = $165,000. 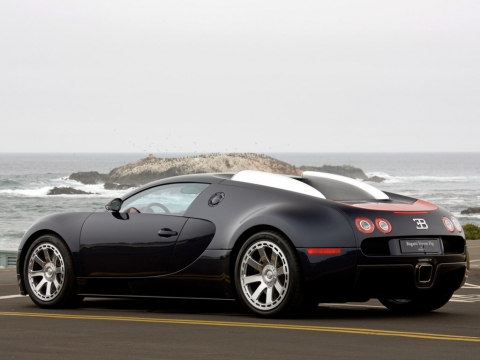 If the volume of air travel is any indication, people want and need to travel at speeds above 250 mph. While the SSC Ultimate Aero does this, it can’t match the luxury of the world’s most expensive Volkswagen: the Bugatti Veyron 16.4. At around $1.6 million, it only seems reasonably priced against the Fbg par Hermés edition, where special paint and Hermés touches are supposedly worth the nearly $1 million upgrade. At these prices, it seems blasphemous, but this overblown Veyron is king of the supercars that should be affordable. 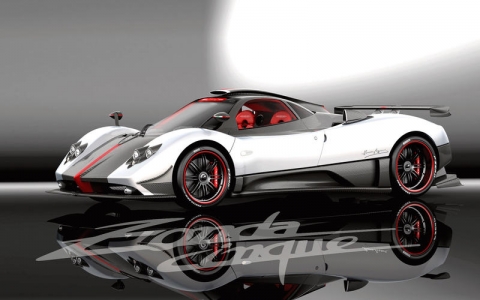 The Bugatti Veyron is one of the most impressive cars to come along in quite some time. After all, this Bugatti workhorse features a quad-supercharged 8.0-liter W16 engine putting out 1001 horsepower that allows it to reach 253+ mph and sprint from 0-62 mph in 2.5 seconds. In fact the 922 lb-ft of torque provided by the twin V8 powerplants allows the car to generate over 1g during fast acceleration. Indeed the Veyron is so powerful that it uses an airbrake to help with stopping and over 10 radiators for cooling. The base price tag of $1.6 million for the Bugatti Veyron 16.4 seems steep but well worth it if money is no object or if your name starts with King or Shiek. The $1 million bump in price of the Hermes edition is just plain outrageous.

When spending this kind of money, we recommend a different approach.

The Bugatti is amazing but not nearly as rare as its price tag reflects. We believe that when dropping this kind of coin you should not only get an amazing driving experience, but handcrafted brilliance and ultimate exclusivity. Enter the Pagani Zonda Cinque, a super limited-edition vehicle (only 5 will be built) that will rocket from 0 to 62 mph in 3.4 seconds. This is basically a street legal race car with a 678 hp AMG engine capable of 217 mph. The cost you ask? A cool $1,550,000. Total savings = $915,430.

So, we’ve seen some pretty amazing cars along this journey as we explored the top 10 supercars that should be more affordable. While reviewing some of the most expensive exotic cars in the world, we also proposed some cheaper alternatives that are just as much fun to drive, have tremendous character, outstanding class and provide a nitrous boost to the male ego. So what’s the overall price delta for our recommendations? A whopping $4,899,430!