2009 is coming to end, which means it’s time to start planning for 2010. Most people’s resolutions include working out more, eating less, recycling and maybe saving a few kittens from a burning building. Here at Sub5zero we’re planning to have the best automotive year yet. 2009 was an incredible year for cars, but things are only going to get better. For our first Top Ten list, we picked the best sports car for 2010 in the $40,000 to $50,000 price range. Follow the jump to find out what we’re looking forward to this year. Who knows, you might even find some help for your next vehicle. 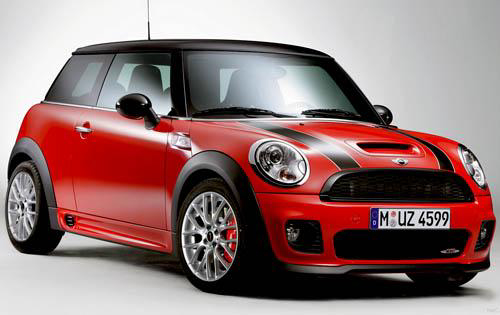 “A mini costs $40,000??” Yes, well, sort of. The Mini Cooper is one of the best cars available today. Sure it’s FWD and half the size of Oprah’s thigh, but it does so many things so well it is far more than a simple sub-compact. For over 50 years the Mini has combined cute looks with great handling, a pint-sized exterior and a cavernous interior. It can take 4 people-with luggage-on a road trip yet manage to park in spots deemed too tiny for a Honda Civic. And it does all of that while having more charm than almost anything on the road. They also drive like a mini bat-out-of-hell. To reach our price point we had to pull out all the stops and go for the Cooper S JCW Edition. “Aw gee, you mean I have to order the best Mini they make? Rats.”

Starting at $28,800 the JCW Mini has a supercharged inline-4 making 208hp/193ft lbs., sling-shotting this pebble to 60mph in 6.2 seconds. With serious suspension, brake, and TC tweaks, the JCW Edition is the ultimate Mini. A Mini Cooper S turned up to 12. The ability to customize your Mini is something BMW promoted from day 1, and they still have it down in spades. What material would you like around your gauges? How about the dash, mirrors, roof, or steering wheel? What color would you like the air in the tires to be? The choices seem endless.

By adding on $17,000 worth of options (Bluetooth, red leather, NAV, stereo, carbon fiber, etc, etc etc.) we turned it into a comfortable, stylish, 100% personalized Mini that would lead the pack in any FWD hatch shootout, and give plenty of “sports cars” a serious fight on your favorite set of twisties. 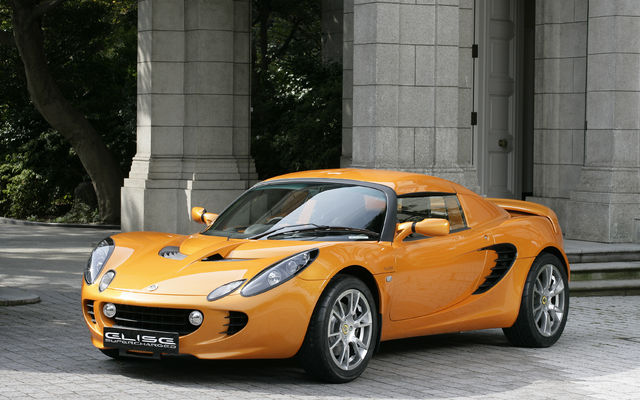 If your idea of a sports car is a car with 2-doors, RWD, a manual transmission and telekinetic handling all wrapped up in a curvaceous, sexy body, look no further than the Lotus Elise. Since it came to life in 1995, it has been the bench mark for a “driver’s car.” This car provides the grip, poise, and performance of cars 4 times more expensive. Handling has always been the forte of Lotus, but reliability wasn’t. That fear is in the past, thanks to a Toyota-sourced 1.8L engine producing a healthy 190hp. Yes you have to rev the hell out of it, and it won’t win the Texas Mile, but this car is neither for idling around town or doing high speed highway runs. Canyons, road courses, Auto X; these places are the Elise’s natural habitat.

The MSRP on an Elise if $47,250, and for that money you get a lot. Here’s a few of the names that will be on your spec sheet; Brembo, AP, Eibach, Bilstein and Advan. Those names some of the best in the business when it comes to making cars stop, turn and stick. It’s no wonder these cars feel like they have tires made out of Gorilla Glue. With that MSRP, we had very little room for options, so we went with what we felt would heighten the driving experience even more; the LSD. Let’s face it, if you buy an Elise, even with an unlimited budget you won’t be building a comfortable coupe that bathes you in serenity and gadgets. It’s a car, and nothing more. It will have a heater fan, if you’re lucky. This is a bare-bones car meant for one thing; driving. The LSD ($1,790) just makes the car do its thing a little bit better. For $49,000 you won’t find anything with the looks of an exotic and the handling to match.

These cars have been around for a while, but every year they get better. In 2008, the British company’s Caterham R500 lapped the Top Gear test track in 1:17.9, screaming its way into 5th place on the “Power Board” and beating cars like the Zonda F, Maserati MC12 and the Bugatti Veyron. Well the R400 is basically the same car, with 50 fewer horses under the hood. Think that will slow it down? No more than the War on Drugs slowed down Andy Dick. It’s just as light as the R500, weighing a Kleenex-like 1,133 lbs. It makes 210hp from a 2.0 liter Duratech engine, giving it a power-to-weight ratio better than any Ferrari currently on the market. That means 0-60 happens in 3.8 seconds, and it will go on to a top speed of 140 mph, sounding like all the world’s hornets are chasing you down a tunnel.

Calling the steering “communicative” is an insult. Turn in happens as fast as your eyes can follow corners, and the grip will move all your teeth to one side of your mouth… and then to the other side. A 6 speed transmission means you’re constantly shifting, but that only heightens the experience of driving it. Vented discs with 4-piston calipers will leave you with bruises that perfectly resemble the 4-point harnesses. At $42,745 this is the most visceral, raw, adrenaline pump you can buy. It will equally challenge and reward you. You won’t want to drive it across 2 states, but it’ll be so much fun you’ll think about it.

Watch it in action against the more expensive Ariel Atom

It’s no secret I love fast sedans. They are the balance of everything you would want from a car, transporting passengers and cargo while giving the driver a thrill. If I had to own only one car for life, it would no doubt be some form of sport sedan. This year one of the brands that does them best, is bringing one of its best examples back: the Audi S4. The last S4 had a V8 that produced 340hp and 302 lb-ft. of torque and burned gas like an Exxon shareholder, getting a combined mpg of only 16. The new S4’s engine is better in every way. It’s a 3.0 liter super-charged V6, but it’s only down 7hp (333) and makes 22 more lb-ft. of torque (324@2,900 RPM). Somehow Audi got better fuel economy as well, achieving 27mpg on the highway. Get it with either the 6 speed manual or 7 speed S-Tronic and 60mph is gone in 4.9 seconds. It has a great Audi interior, seats 4 adults comfortably, and the design is aggressive but tasteful.

The smaller engine also bodes well for the handling of the S4. The last V8 model was very nose-heavy, but that ailment is gone in 2010, due to 2 things. First, the AWD system is rear-biased(40/60), giving it great balance during mid-corner “throttle testing”. The second is the one option box you must tick, the Sport differential. It’s a $1,000 option, and acts the same way as the Mitsubishi Evolution’s yaw-control. When cornering it sends power to the outside wheel, balancing the car with power rather than using the brakes, like a TCS system. Starting at $47,300 it’s not cheap, and simply holding the pencil over the options book will drive the price up. But if you don’t need special leather gas tanks and Blue Tooth coil-overs, you can have one of the best sedans on the market for under $50,000.

See it in motion.

The R20 is essentially the return of the much-loved R32, a hot, AWD version of the GTI. These cars are one of the best examples of building a fun, performance-oriented car that is also highly practical. The last two generations of the R32 were powered by VW’s narrow angle, 3.2-liter V6. However the new version will be powered by a tuned version of the current GTI’s FSI 2.0-liter turbo-charged 4 cylinder. This engine will be pumped up to 270hp, no doubt leaving A3 drivers quite upset. It will share running gears with Audi’s TTS, using the Audi Quattro system instead of VW’s Haldex design from previous R32 generations. No doubt a DSG will be standard, but hopefully this time VW offers us a manual as well. It will share bodywork with the fantastic-looking 2010 GTI, but will probably have some special accents inside and out to set it apart. Expect 0-60 to happen in the low 5s.

The best aspect of this car should be the handling. While the VR6 has one of the best soundtracks out there, it was like an anchor mounted too far forward on the short GTI’s frame. The car was nose-heavy, and understeer came standard. The new 2.0 liter should solve that, leaving us with a lighter, better balanced, more agile car. An AWD GTI would an incredible car. Fast, balanced, and practical this hot hatch will be a serious contender across the board. Prices aren’t out yet, but are expected to be in the low $40,000s.