Pickup trucks, by design, are beasts of burden. They usually give up things like a cushy ride, fuel economy that won’t give a Greenpeace member facial tics and handling that doesn’t resemble that of a Panamax container ship in exchange for the ability to carry large amounts of cargo. Again, that’s usually the case.

Sometimes, though, automakers get a little sauced, and instead of putting a lampshade on their heads, they ask themselves, “What if we made a high performance version of our pickup truck?” It’s happened more times than you might think; enough times, in fact, to warrant the following top 10 list. 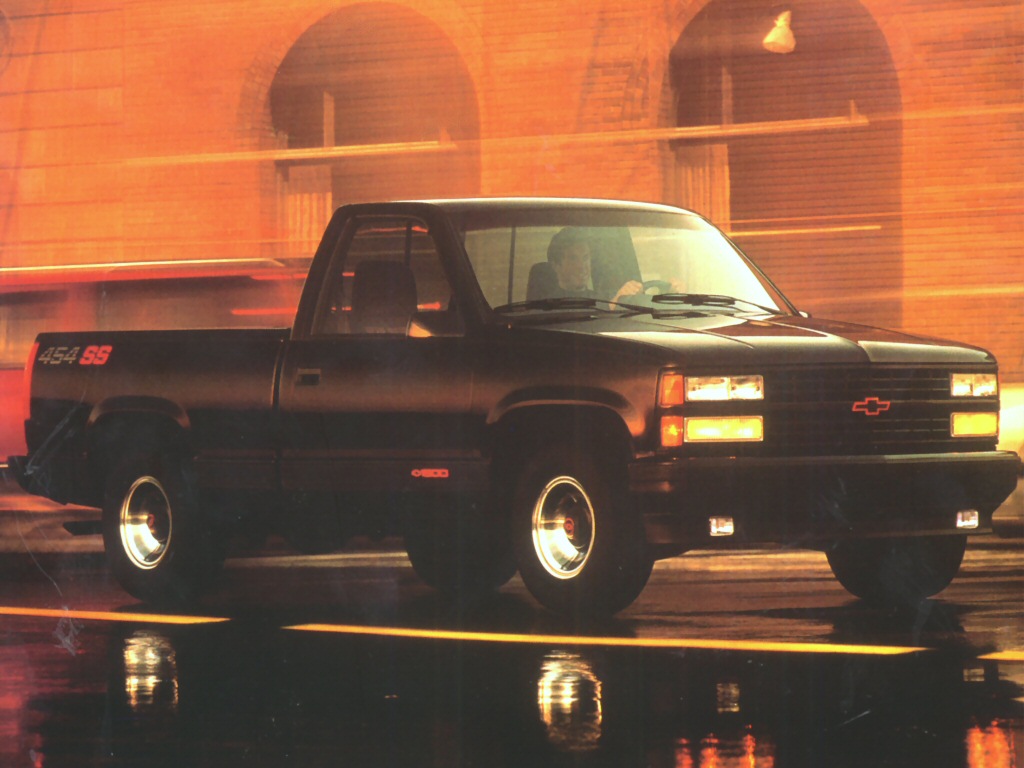 Chevrolet’s 454 cubic inch (7.4L) Big Block V8 was the largest engine put in a production muscle car back in the day, but by the late ‘80s it was only offered in heavy duty pickups and Suburbans. But in 1990, two years after the introduction of the thoroughly modern GMT400 series full-size pickups, Chevrolet unleashed the half-ton 454 SS.

Available only in two-wheel-drive, regular cab shortbed configuration and in three exterior colors (black being the most popular by far), the initial 454 SS offered up a 230hp, 385 lb.-ft EFI-fed Rat Motor backed up by the legendarily-robust TH400 3-speed automatic transmission. For its day, it was all kinds of potent and all kinds of fast; the 1991-’93 models were enhanced even further with 255hp and 405 lb.-ft plus an electronically-controlled 4-speed automatic. And if you ask us, the GMT400’s lines are still as handsome as ever. 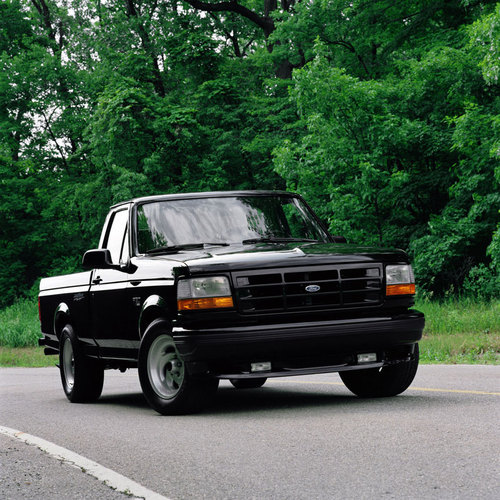 Not about to let its arch nemesis have the muscle truck market all to itself, Ford tasked its Special Vehicle Team (SVT) with building a truck to battle the 454 SS. They came up with the Lightning, a hot F-150 regular cab shortbox powered by a spiced up version of the venerable 351 cubic inch (5.8L) Windsor V8. The output figures (240hp and 340 lb.-ft) weren’t quite a match for the Big Block Bowtie, but the aluminum driveshaft and 4.10 gears clawed back a large portion of that deficit. And the Chevy crew didn’t have 3-time World Driving Champion Jackie Stewart helping with chassis setup, either. (If the mental image of JYS flinging a big American pickup around a road course doesn’t fill your mind with f-bomb, we can’t imagine what will.) 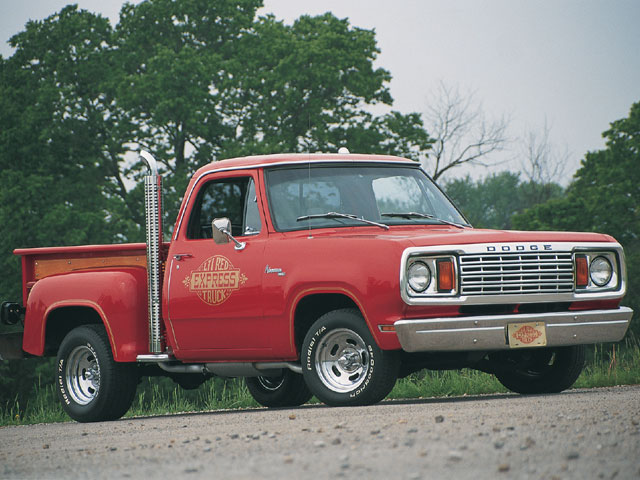 The mid- to late-1970s were without question the Dark Ages of performance cars in North America, but there were some bright spots. One of which wasn’t a car at all. Thanks to some emissions certification loopholes, Dodge was able to drop a warmed up incarnation of its 360 cubic inch (5.9L) V8 into a special edition D-Series half-ton called the Li’l Red Express. Rated at 225hp, the tweaked LA-series motor was matched up with the nukeproof A727 Torqueflite 3-speed auto and an aggressive-at-the-time 3.55:1 rear axle ratio.

Performance is laughable by 2011 standards, but in 1978 it qualified as a screamer. And the visuals screamed as well, with red paint, gold logo decals on the doors and tailgate, wood bed trim and, most memorably of all, functional big rig style exhaust stacks. Groovy, baby. 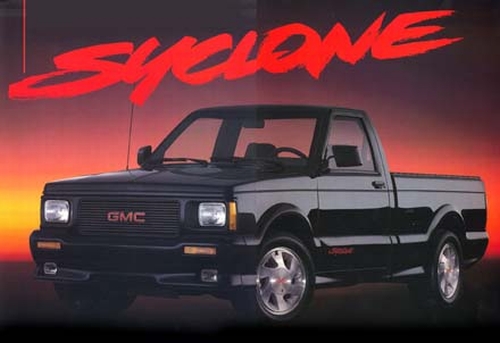 By now you’ve probably concluded that the muscle truck formula is quite simple: Drop in a big honkin’ V8, a sturdy transmission to send the power to the rear wheels, and then add whatever decals and other trinkets the remainder of the budget will allow. Why mess with what works?

GMC clearly asked “Why not mess with what works?” when developing the super sophisticated Syclone (The misspelling was purely intentional; Ford still had “Cyclone” trademarked, even though the last Mercury to wear the nameplate left the factory long before GMC wanted to use it.). Starting with the compact S-15 regular cab shortbed, engineers added a turbocharger and intercooler to the 4.3L V6 to yield 280hp and 350 lb.-ft of torque, as well as a pavement-oriented all-wheel-drive system and sport suspension. Low 13-second quarter-mile times were a piece of cake, something that couldn’t be said of more than a few proper sports cars back in 1991. Sadly, ’91 would be the Syclone’s only year of production (though a mechanically-identical 2-door SUV called the Typhoon was produced in ’92 and ’93), so don’t expect to find one of the 2,995 made in your local PennySaver. 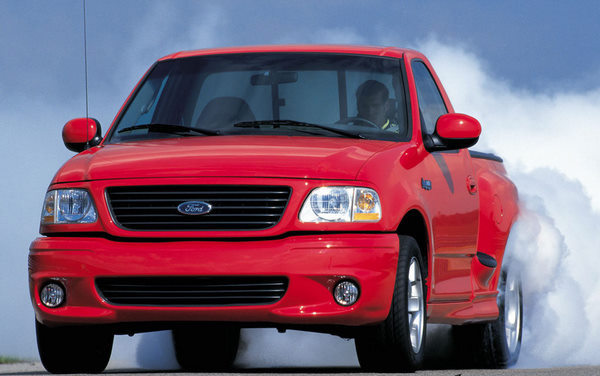 The original SVT Lightning was and still is a quick truck, but the world had moved on since the last Gen 1 Lightning was made in 1995. Ford had moved on, too, dumping its long-serving pushrod V8s in favor of the overhead cam Modular family. But this didn’t stop SVT from bringing the Lightning back to life; if anything, it made for an even more formidable machine.

The 5.4L SOHC version of the Mod Motor installed in the second generation Lightning (introduced in 1999) was fitted with an Eaton supercharger and other power-adding goodies to yield 360hp and 440 lb.-ft of torque (Increased to 380hp and 450 lb.-ft on 2001-’04 examples.). Sport suspension was again part of the package, as was a racy (but not over-the-top) body kit and unique headlights and taillights. It was also only available with a stepside bed, something all truckmakers abandoned at or shortly after the time the Lightning was discontinued. Coincidence? 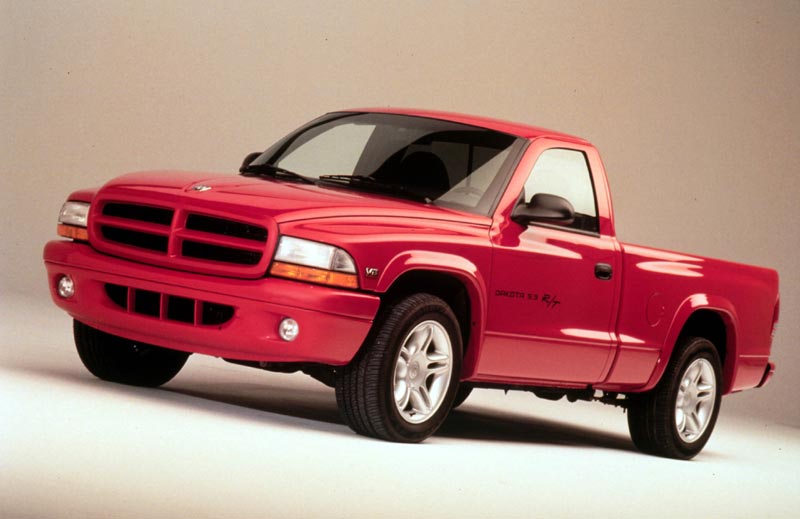 As the only small pickup (though Dodge has long insisted on calling it a mid-size) from the erstwhile Big Three to be available from the factory with a V8, the Dodge Dakota lent itself to hot rodding, either by the factory or the aftermarket. Dodge decided to throw its hat into the ring by doing an in-house sport version, the centerpiece of which was a thoroughly updated version of the 5.9L V8 that powered the Li’l Red Express back in the day. In the Dakota 5.9 R/T, it was rated at 250hp and 345 lb.-ft of twist. Throw in monochromatic paint and sweet-looking 17” wheels and you have the classic muscle car formula in handy truck form. 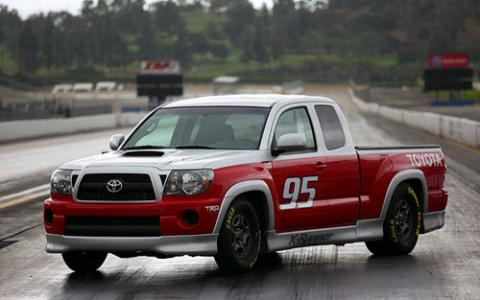 The appeal of a big engine in a small(er) truck hasn’t been lost on very many people, including – rather surprisingly – Toyota. The Japanese company’s American performance arm, TRD USA, used last fall’s SEMA Show in Las Vegas to premiere a bracket-racing-ready Tacoma concept powered by a supercharged version of the full-size Tundra’s 5.7L V8. With 504hp and 550 lb.-ft on tap, it should come as no surprise that Toyota claims this extra-spicy Taco will crack off quarter-mile runs in the 11-second range. Now that’s moving forward… 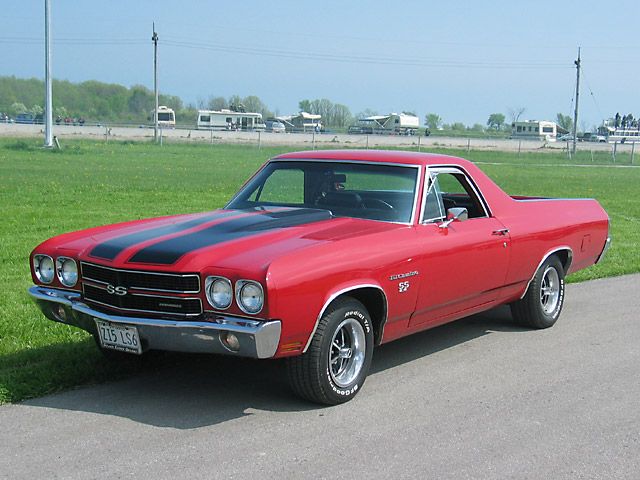 While the first muscle car era was dominated by, well, cars, it’s worth remembering that Ford and Chevy both built mid-size passenger car-based pickups during this period: The Ranchero for Ford, and the El Camino for Chevrolet. Not surprisingly, an abundance of parts interchangeability with muscle cars like the Chevelle SS and Torino GT made high-po trucklets cheap and easy to build, which is exactly what the two warring factions did.

But nothing Dearborn put in dealerships could measure up to what the General offered in the ’70 El Camino SS: the LS6, a 454 Big Block with phasers set to “Kill.” Though the factory claimed 450hp and 500 lb.-ft, many experts consider these numbers B.S., figuring that they were lower than the actual numbers in order to bamboozle insurance adjusters. Regardless of the numbers, the LS6 ‘Camino was able to lunge toward the horizon in a manner that is best described as a religious experience for its occupants. And Dios mio, is it a looker to boot… 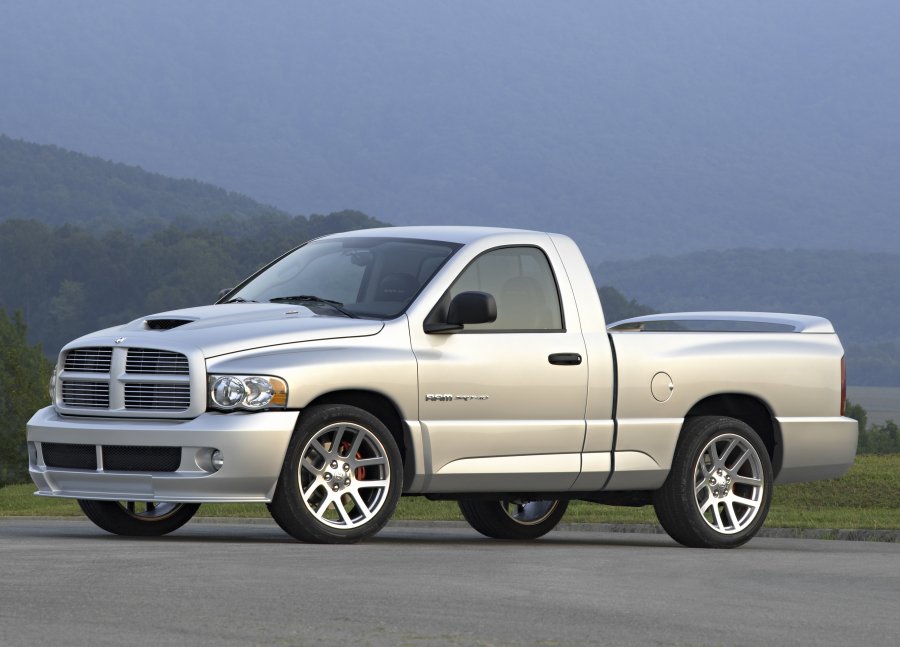 The Ram SRT-10 wasn’t the first production Dodge pickup to make use of the same V10 engine architecture as is used in the Viper, but it was the first to use the same specification V10 as the Viper. That meant 510hp and 525 lb.-ft from 8.3L and 10 cylinders…in a pickup truck. It was offered in both regular cab (6-speed manual only) and four-door Quad Cab (4-speed automatic only) configurations, and to this day holds the world record as the fastest stock production body-on-frame pickup truck at 154.587 mph. To paraphrase former Chrysler chief Lee Iacocca, if you can find a more psychotic truck, buy it. 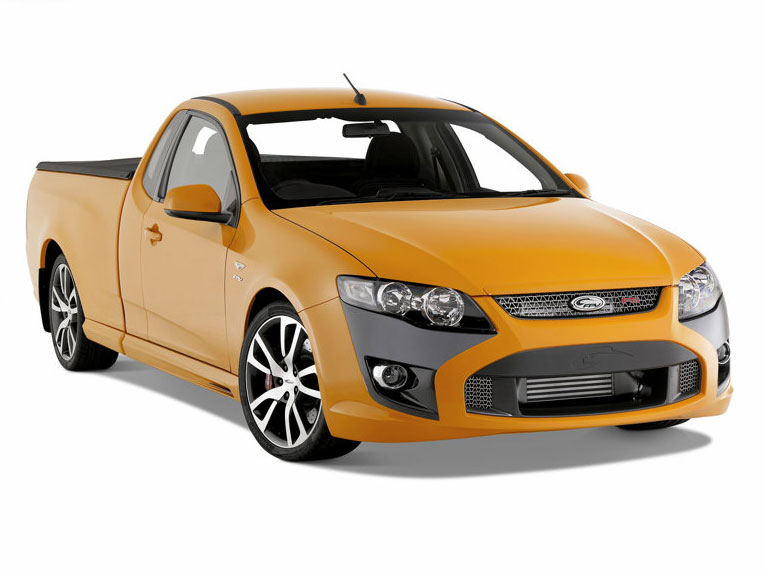 Finally, it’s easy to assume that fast pickups are a uniquely American phenomenon, but that’s simply not the case. For many years, Australians have been able to purchase high powered car-based trucks called utes (think modern day El Camino or Ranchero) from Holden and Ford, as well as their in-house tuners (HSV and FPV, respectively). Among the most monstrous of these is the FPV F6.

Using the FG series Falcon Ute as a foundation, the blokes and sheilas at FPV drop in a high-output version of Ford of Australia’s turbocharged DOHC 4.0L straight-six (making a claimed 420hp and 417 lb.-ft) and a choice of 6-speed manual or 6-speed automatic transmission. It also receives enhanced suspension tuning, bigger wheels and brakes and, uh, rather emo-looking front end coloring. Hey, we never said hot pickups are compromise-free vehicles.