Brought to you by The Legend Revealed on Halloween – October 31st

Speed has always been at the very heart of motor racing, and naturally, as speeds have climbed, new records have displaced old ones. While seldom seen nowadays as sanctioning bodies attempt to clamp down on costs and maintain a relatively safe environment, there’s a sense of wonder and realization that you’re a part of history when they do happen, as you watch the boundaries of human and mechanical achievement pushed farther forward by these latter-day frontiersmen.

Of course, some record-breaking runs are truly iconic. In these cases, the time, place, speed, man and machine have all managed to transcend being individual figures and converge to become defining verses in the story of motorsports, verses that are quoted by scholars of the sport’s history. Which instances are on our list? Read on…

We’ve sat and thought for a long time, but we can only name one car that essentially killed the racing series in which it competed. That would be Porsche’s mighty, mighty Turbopanzer, the 917/30. Propelled by a 5.4L twin-turbo flat-12, this 1,100hp+ missile won all but one race in the 1973 SCCA Can-Am season with Penske Racing and driver Mark Donohue. The next year, though, rule changes were implemented that basically outlawed the 917/30 and meant the end of the series as a flat out, sky’s-the-limit engineering utopia, hastening its eventual demise.

But Donohue, Penske and the 917/30 would have one last hurrah together: On August 9, 1975, Donohue took a modified 917/30 around what is now Talladega Superspeedway at a one lap average of 221.160 mph, setting an international closed-course record that would stand for five years and an American closed-course record that would stand for 11 years. Sadly, Donohue would die 10 days later from complications resulting from a Formula 1 crash in Austria. 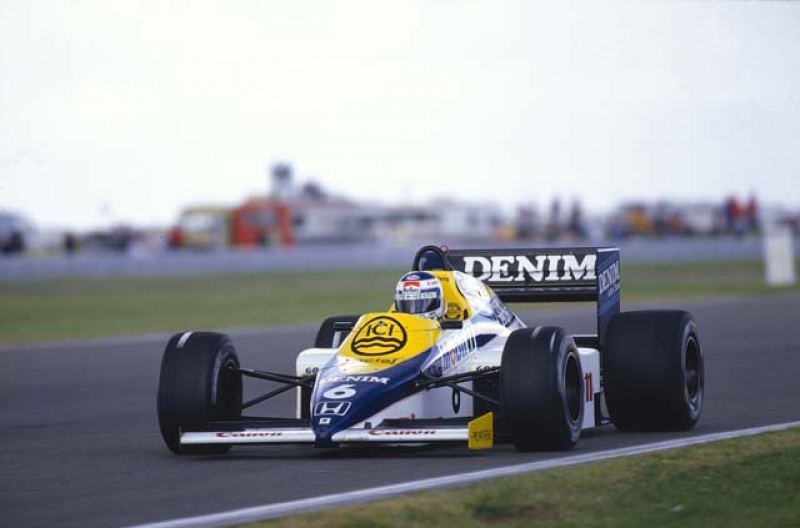 It may be hard to believe now, but the Silverstone Circuit in England wasn’t always comprised of so many zigs, zags and squiggles. In fact, through the 1990 season, the track layout followed the paths of the access roads and taxiways encircling the WWII-vintage runways pretty much verbatim. As a result, it was one of the fastest tracks in Formula 1 along with Monza and Hockenheim.

It was here in 1985 that Keke Rosberg, the mustachioed Finn who was world champion three years prior, piloted his Willams-Honda FW10 (sporting a 1.5L twin-turbo V6 with well over 1,000hp in qualifying trim) to a pole-winning speed of 160.9 mph. It would remain the fastest official lap turned by an F1 car until the 2002 Italian Grand Prix at Monza, where Juan Pablo Montoya turned in a 162.949 mph lap in his Williams-BMW FW24 to take pole. 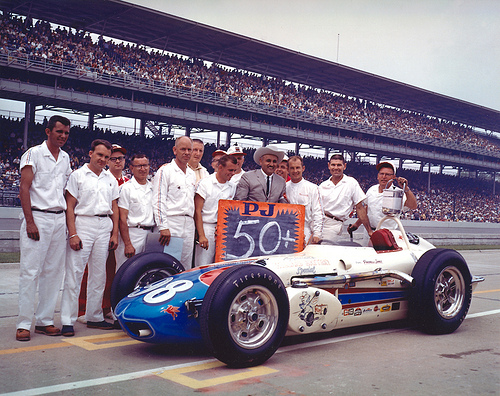 As the 1960s dawned, it soon became a question of when, not if, someone would average 150 mph around the Indianapolis Motor Speedway. Turns out, it would happen in 1962, the first year all the bricks (save those at the yard-long start/finish line) were paved over. The first driver to break the buck-fifty barrier? Sophomore sensation Parnelli Jones. The car? J.C. Agajanian’s Willard Battery Special roadster, nicknamed “Ol’ Calhoun”.

The secret behind the record run? As Parnelli explains in this video, he discovered a way to use the throttle to cure understeer on corner exit the previous year. Parnelli would lead the early stages of the race, but brake problems would take him out of contention. His place in history, however, was and always will be secure. 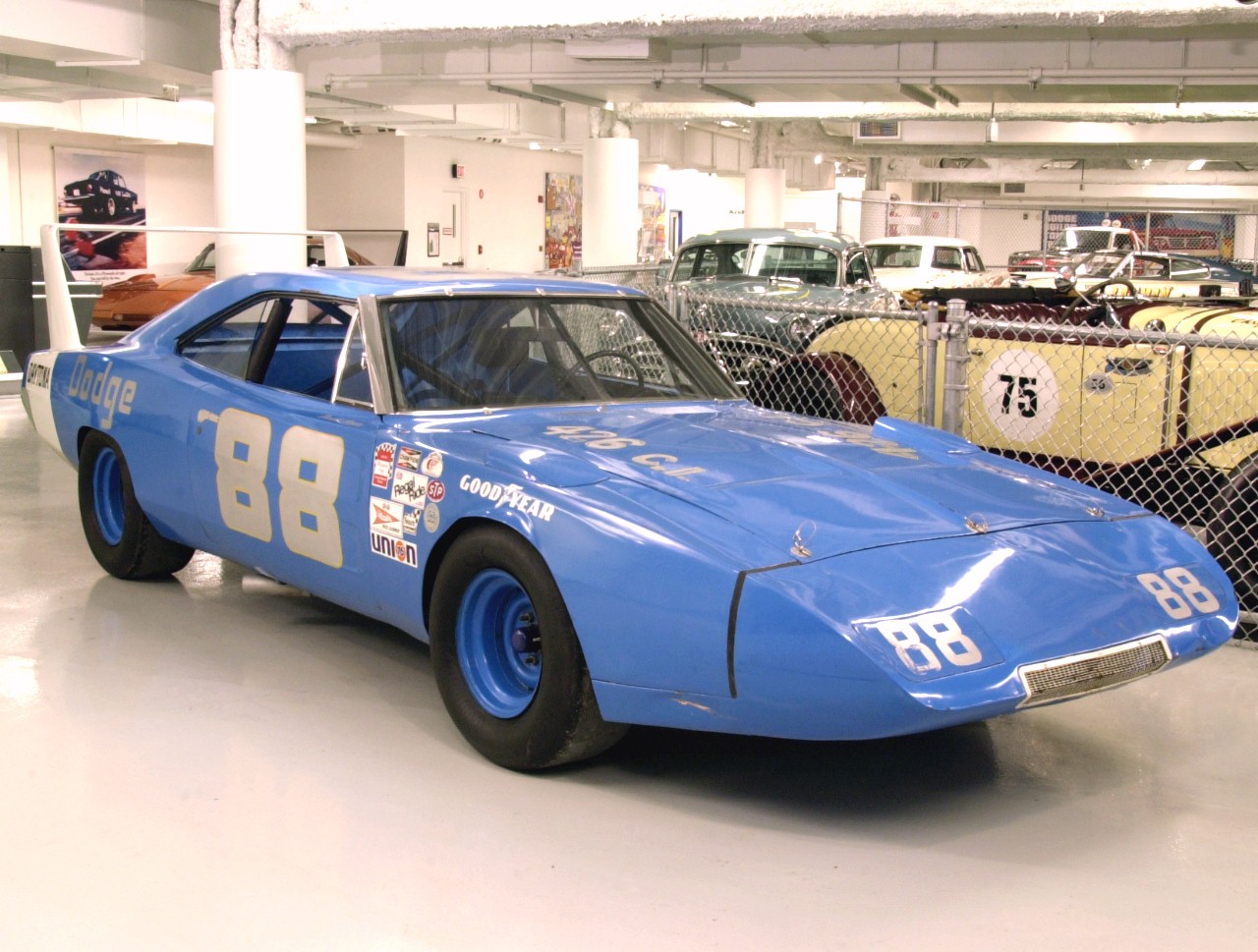 As we learned a few weeks ago, the late 1960s saw a period of radical experimentation and explosive rates of development in the area of aerodynamics in NASCAR, peaking with Chrysler’s Winged Warriors: the Dodge Charger Daytona and the Plymouth Road Runner Superbird. No surprise, then, that it was a Chrysler Engineering-prepped Charger Daytona that broke the 200 mph barrier for stock cars on March 24, 1970. The venue was the year-old 2.66-mile tri-oval at Talladega, and the driver was second-generation NASCAR star Buddy Baker. The lap at 200.447 mph would be the fastest for a stock car for over a decade, but as we’ll see later, that mark would most definitley be beaten. 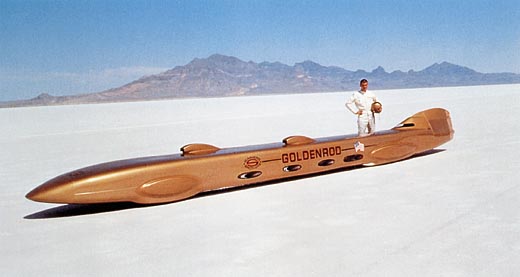 Buddy Baker set a record with just one 426 cubic-inch Hemi, but there was one car that used a fuel-injected quartet of ‘em (arranged in-line, no less) to set a record five years earlier that was only beaten a mere two months ago. Southern California hot rodding brothers and speed equiment manufacturers Bob and Bill Summers built and campaigned the Goldenrod (so named for its color and the elongated shape), and on November 12, 1965, Bob drove it to a speed of 409.277 mph through the flying mile at Utah’s Bonneville Salt Flats, setting an FIA record for wheel-driven, piston-engined vehicles.

That record would stand until it was bested (by less than 1 mph) by Al Teague in 1991, but since Teague’s car was supercharged, the record for wheel-driven, naturally-aspirated piston-engined machines would remain with the Summers family (Bob passed away in 1992.) until this September’s Bonneville meet, when Charles Nearburg surpassed it. In case you don’t trust your own arithmatic, that’s a span of 45 years. Not too shabby.

For most people, the prime objective in circuit racing is winning the race. Occasionally, however, there are some folks who want to grab the headlines via some other avenue; if doing so means losing the race, so be it. For the 1988 24 Hours of Le Mans, the French organization Welter Racing opted to take this latter path with one of its Peugeot-powered entries. Codenamed “Project 400 (as in 400 kilometers-per-hour),” the P88 was fitted with special narrow front tires to reduce rolling resistance and aerodynamic drag which, combined with the ultra-low drag bodywork and increased turbo boost, meant driver Roger Dorchy was clocked at 251 mph (404 kph, for those who prefer the Metric System) on the track’s three-mile Mulsanne Straight.

Suffice to say, the car didn’t go very far after that, retiring due to overheating on lap 59. (In fairness, though, going racing with any PRV V6 – nevermind one that’s been boosted out the wazoo – is basically another way of saying, “Keep your damn checkered flag!”) Two years later, at the FIA’s behest, race organizers installed a pair of chicanes on the Mulsanne, meaning Monsieur Dorchy’s record will likely stand forever. 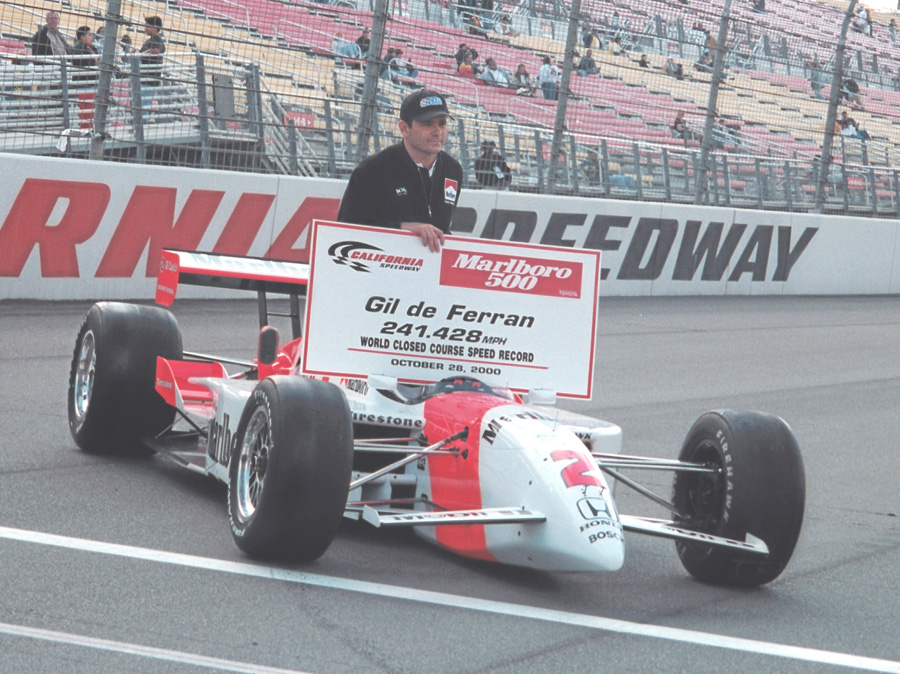 In the late ‘90s, engine, chassis and tire competition in the CART series led to ever increasing speeds at the series’ fastest tracks, Michigan International Speedway and its near-twin, California Speedway (now Auto Club Speedway). This was despite efforts to slow the cars that included tighter controls on turbo boost pressure and the addition of a vertical plate on the rear wing called the Hanford Device. The upward creep of velocities came to a head in qualifying for the 2000 season finale at California Speedway.

Team Penske driver and, as it would turn out, season champion Gil de Ferran of Brazil was the last car to qualify, but his run was anyhting but the slowest. De Ferran piloted the Honda-powered “Renske” (as pundits labeled the Penske-modifed Reynard chassis) around the 2-mile oval at an average of 241.428 mph. Even watching the video you can get a clear sense of the sheer speed, and while some people debate whether or not it’s the real closed-course speed record, there’s no doubt it’s the fastest lap ever turned by an Indy-type car, and likely always will be. 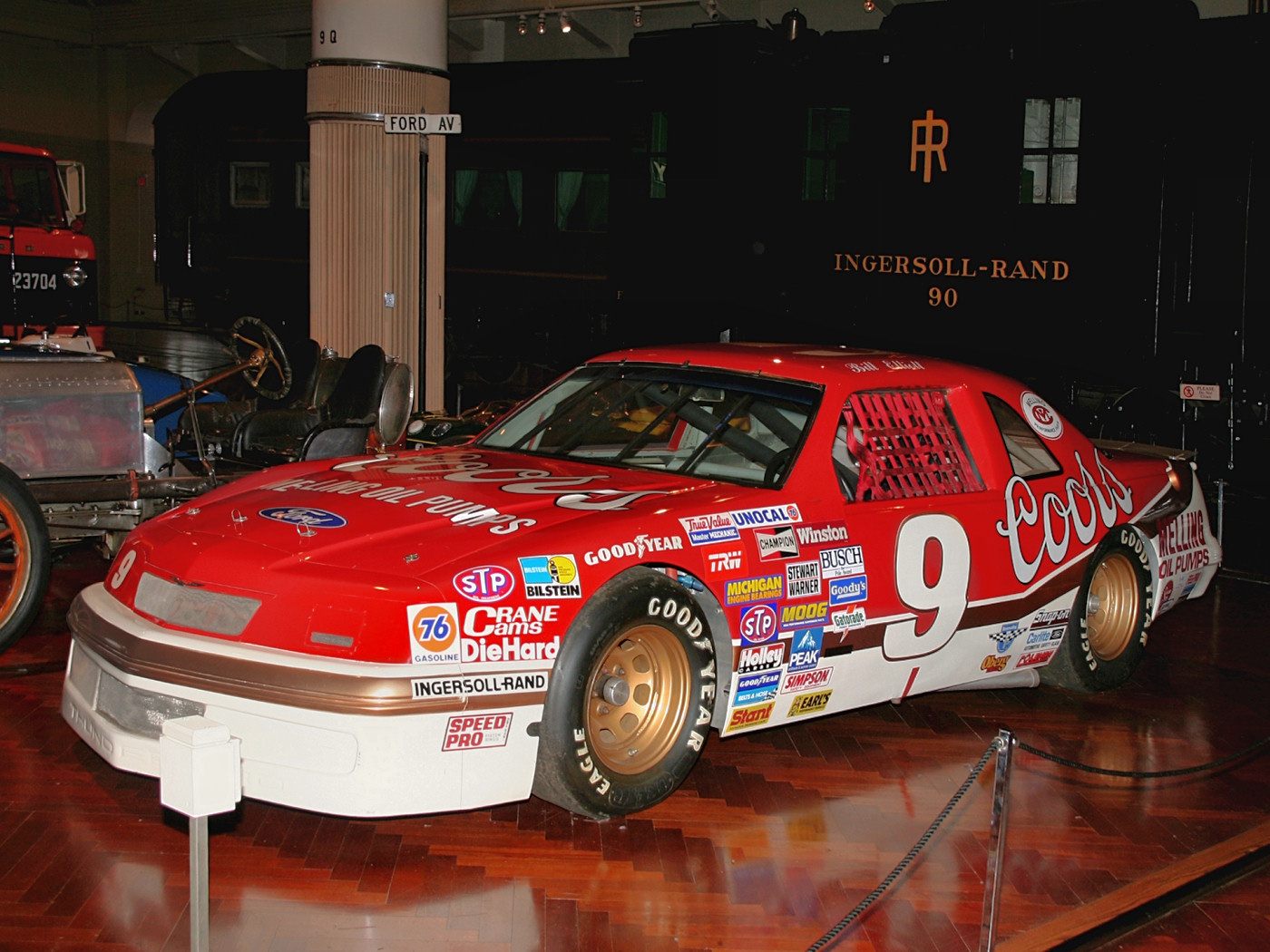 While Buddy Baker’s 200 mph lap at Talladega was certainly noteworthy, it wasn’t the last NASCAR speed record set at the Alabama track. The last offical NASCAR Cup Series speed record was set at ‘Dega during qualifying for the 1987 Winston 500 by Bill Elliott. “Awesome Bill from Dawsonville” blasted his iconic Coors Ford Thunderbird around the high banks at a one-lap average of 212.809 mph to take pole. So why has this mark technically never been beaten? During the race, second-fastest qualifier Bobby Allison suffered a tire failure going through the tri-oval. The local favorite’s Buick LeSabre spun around, took to the air and pummeled the catch fence, actually tearing out a section of it.

While no one was seriously injured or killed, NASCAR knew how big a bullet they had dodged and decided enough was enough. For the next races at Daytona and Talladega the cars ran with smaller carbuerators, while for 1988 the cars were fitted with restrictor plates (thin pieces of metal that sit between the carbuerator and intake manifold to limit the amount of air and fuel entering the engine, thus reducing the horsepower and the speeds) at those two tracks. They’ve been in place ever since, securing Elliott’s place in history. 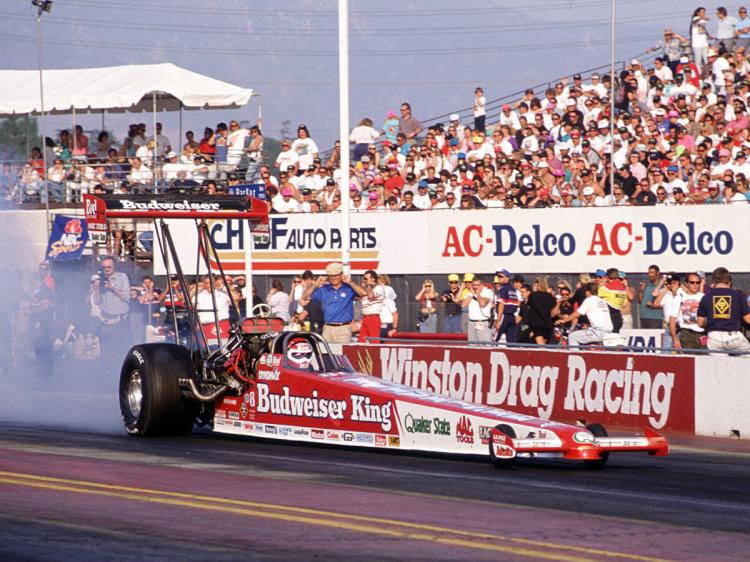 For most of its history, drag racing has been about covering the standing quarter mile in as little time as possible, preferrably less time than the driver in the other lane. Through the sport’s first four decades, advancements in engine technology and car design pushed trap speeds higher and higher. By 1992, it was pretty routine for a top fuel dragster to cross the finish line at better than 290 mph. The question of people’s lips was, “Who will be the first to 300?” In qualifying for the third race of the season at Gainesville, Florida, they got their answer: Kenny Bernstein, who rode the Budweiser King dragster to a 301.70 mph pass.

Eventually, top fuelers would surpass 330 mph, though safety-centric changes made in the last few years (including shortening the track to 1,000 feet for the NHRA’s nitro-burning classes) mean that number no longer appears to be achievable. But the fact that Kenny Bernstein was the first to prove 300 mph was doable ensures him permanent residency in drag racing lore. 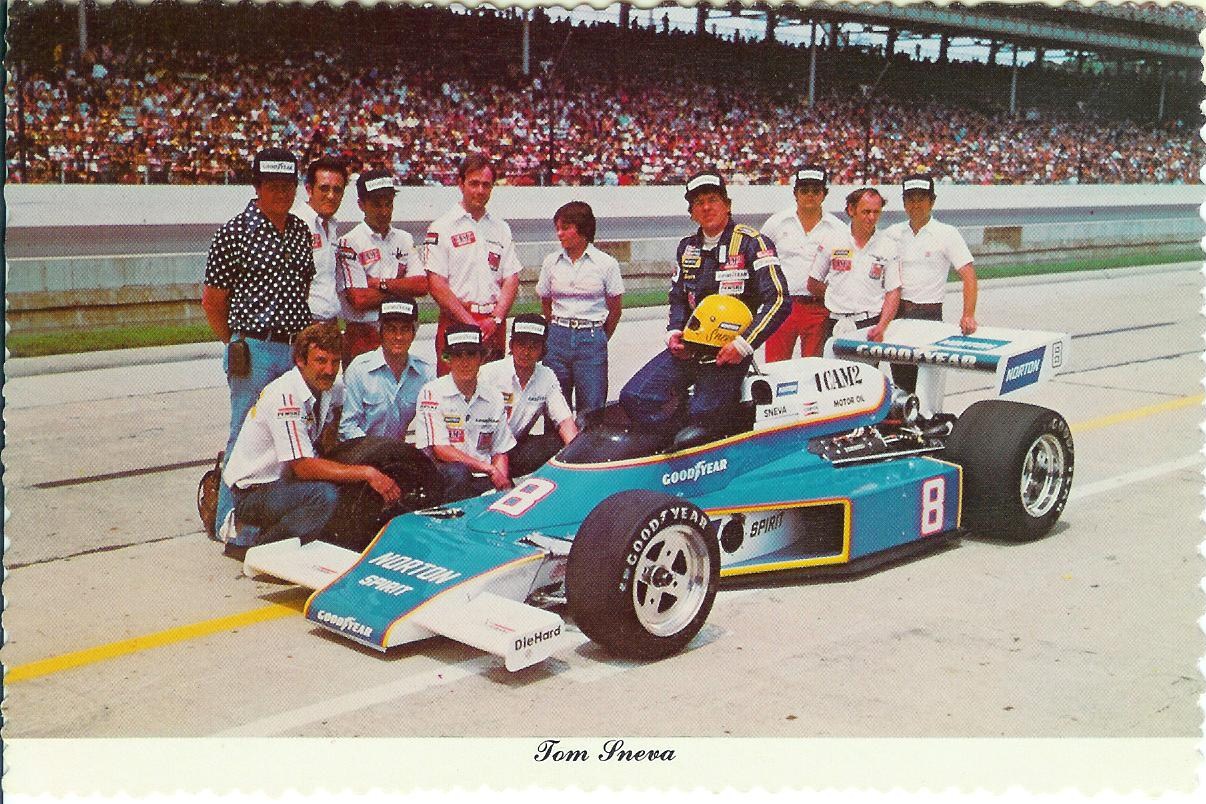 While Parnelli’s 150 mph run at Indy was one of the last major achievements for the front engine roadsters at the Speedway, it would take another 15 years before the next big speed barrier – the one at 200 mph – to fall at the famous Hoosier rectangle. The pace increased by leaps and bounds at the dawn of the 1970s, but a rash of tragic accidents in 1973 prompted USAC to call for smaller wings and less boost for 1974. But the clever engineers and mechanics working in the increasingly scientific world of IndyCar racing soon clawed their way back.

Going into qualifications for the 1977 Indy 500, Penske driver (nee high school principal) Tom Sneva boasted to legendary track public address announcer Tom Carnegie that he would be the first to crack the double ton. Sure enough, Sneva’s first two laps in the Norton McLaren-Cosworth were over 200, the faster at 200.535 mph. The four lap average was good enough for pole, but the Washington State native would have to settle for second on race day (Sneva’s only 500 win would come in 1983.). But with the 250 mph mark unlikely to ever be breached, the 200 mph represents IMS’s last major speed milestone, and the one they call the Gas Man will always be the first man to surpass it.