The Top 10 Dodge Vehicles of All Time

Although a great many “experts” advise against going into business with one’s siblings, there have been many occasions of brothers and sisters collaborating where the venture didn’t end in financial ruin and prolonged awkward silence at family gatherings. One such example is Dodge, which was founded in 1914 as Dodge Brothers Company after its two principals – John and Horace Dodge – grew tired of making parts and subassemblies and selling them Henry Ford.

In the century since then, the company has built many legendary cars and trucks…so many, in fact, that we had trouble paring down the following list to just 10 vehicles. But by golly, we did it (and arranged them in chronological order, to boot); whether you agree with our selections is, as always, another story… 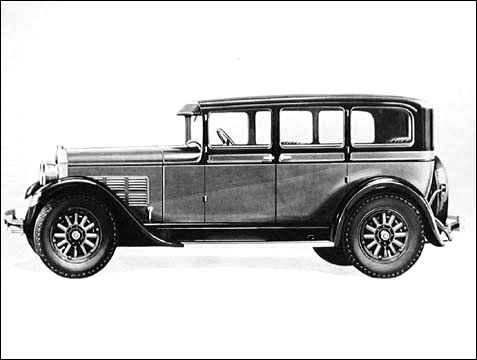 In 1920, tragedy struck one of the U.S. auto industry’s rising star companies: On January 14, John Dodge died at age 55 after contracting Spanish flu and pneumonia. Horace Dodge was hit by the same illnesses at the same time, but managed to survive before he passed away on December 10 that same year due to complications from the flu (though many believe the heartbreak of losing his older brother, business partner and best friend had a lot to do with it as well). He was just 52.

Left without its two guiding lights, Dodge Brothers Company trudged its way through the early 1920s. In 1925, the Dodge family sold the company to the finance company Dillon, Read & Co., who had visions of taking the brand upmarket. The first manifestation of that vision came two years later with the debut of the first Dodge Brothers car with more than four cylinders: The 224 cubic inch (3.7L), 60 horsepower inline-six-powered Senior Six. Featuring a longer 116” wheelbase and fancier interiors than the four-bangers, the Senior Six line set the tone for Dodge’s existence for decades to come, as 1928 would see the elimination of the four cylinder models, the sale of the nameplate to Chrysler, and the formation of new sister brands positioned directly below (Plymouth) and above (DeSoto) it. 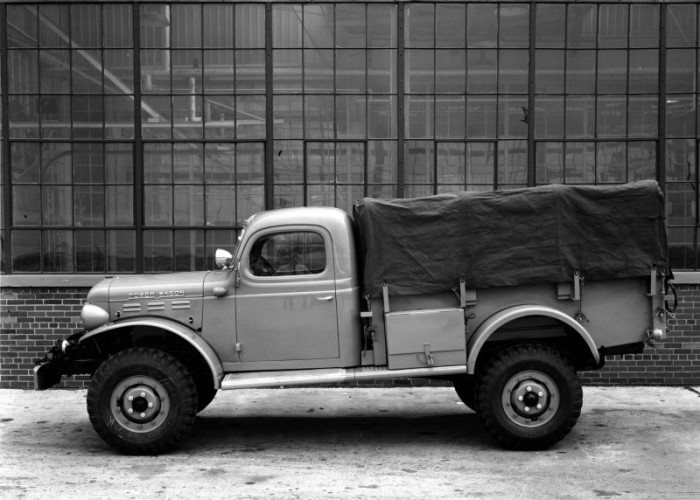 Everyone knows about how the Jeep earned a reputation for vehicular heroism during World War II, but it wasn’t the only four-wheeled veteran to make a successful transition to civilian life post V-J Day; the Dodge WC series ¾-ton truck began showing up in dealers in late 1945 wearing a new, marketing-friendly name: Power Wagon. Obviously, with a 230 cubic inch (3.8L) flathead inline-six under the hood, its acceleration and speed capabilities were the exact opposite of face-ripping, but that was never the Power Wagon’s (or its olive drab daddy’s) mission in life; no, it was designed to take you wherever you wanted to go and do whatever you needed it to do. And with a 4-speed manual transmission, 2-speed transfer case and power take offs for driving accessories like snow blowers and logging saws, it was quicker and easier to name the tasks it couldn’t handle than the ones it could. 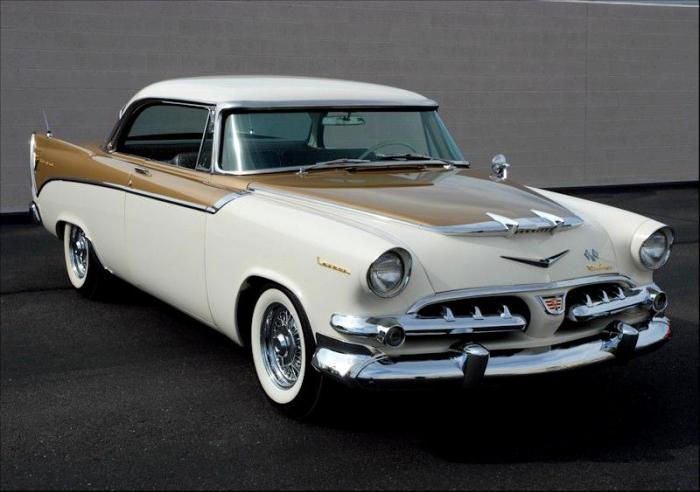 In 1955, Chrysler introduced its first “executive express,” the C-300. The following year, many of the corporation’s other brands jumped on the sporty car bandwagon. Dodge’s entry – called the D-500 – was initially available as a 2-door sedan, a 2-door hardtop and a convertible but, according to the gurus at Allpar.com, you could get D-500 four-door sedans and hardtops and station wagons (YES!) beginning on January 29, 1956. Heavy-duty suspension parts borrowed from the bigger and heavier Chrysler New Yorker and Imperial, upgraded brakes and a high-output version of Dodge’s 315 cubic inch (5.2L) “Super Red Ram” Hemi V8 (which was completely different from DeSoto’s “FireDome” Hemi, and both were different from the Chrysler/Imperial “FirePower” Hemi) rated at 260 horsepower and 330 lb.-ft of torque made the D-500 one of the fastest passenger cars in America in 1956. And the super rare D-500-1, which was designed for customers who wanted to race in NASCAR – was even hotter with a claimed output of 285 horsepower. 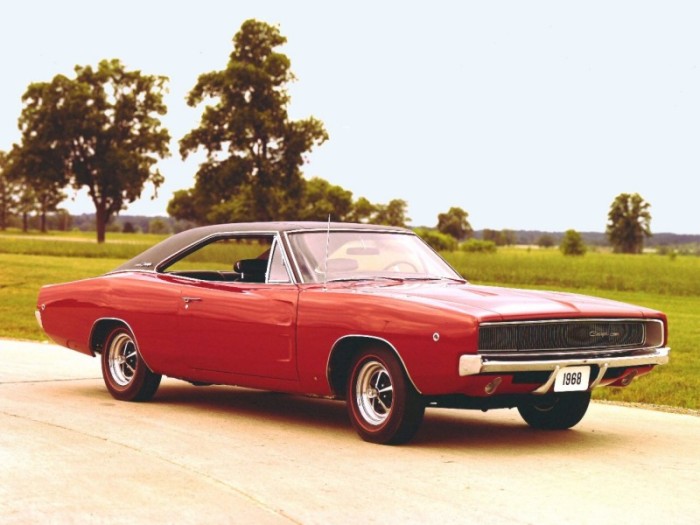 The first generation Dodge Charger (produced in the 1966 and ’67 model years) was quite the looker, and drew an enthusiastic following. But at the end of the day, it was pretty much a fastback Coronet. When the second generation Charger arrived for model year 1968, it still shared the Coronet’s B-platform but, aside from the roofline in profile view, there was no mistaking it for the brand’s bread-and-butter mid-sizer. A recessed grille with hidden headlights, a recessed back window sandwiched between buttressed C-pillars and a tightly-drawn “Coke bottle” beltline gave this hardtop-coupe-only model a shape that became an instant icon, and has remained so ever since. 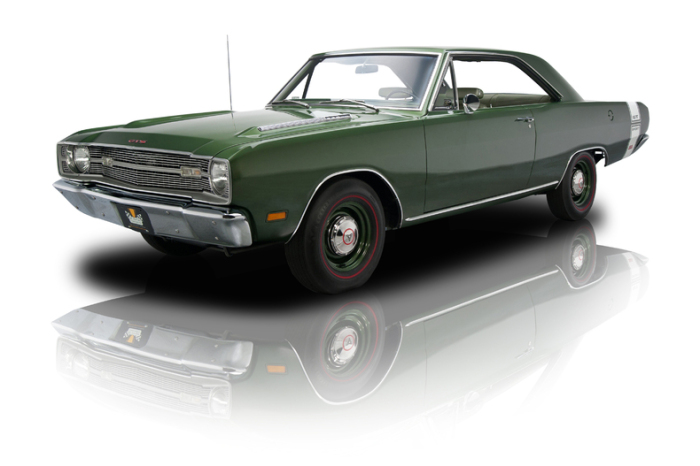 Although the 1968 Hemi Dart was and is a god among muscle cars, it had a lot of things going against it: Limited production (only 50 were made), no warranty, and technically never certified for road use (It was intended for super stock drag racing.). Fortunately, Dodge offered a considerably more practical alternative that same year in the form of the Dart GTS. It had a warranty and was street legal, plus it could be had with most of the regular Dart’s optional features. The “regular” top engine was the 383 cubic-inch (6.3L) V8 but, come 1969, the GTS could be had with the mighty 440 cubic inch (7.2L) V8, rated at 375 horsepower. Sadly, like the ’68 Hemi version, the GTS 440 was built in limited numbers (640 total), and it was only available with manual steering (thanks to limited room under the hood), manual four-wheel drum brakes (ditto), and the TorqueFlite 3-speed automatic transmission. But on a 1,320-foot paved straightaway, few other factory-stock rides could touch it. 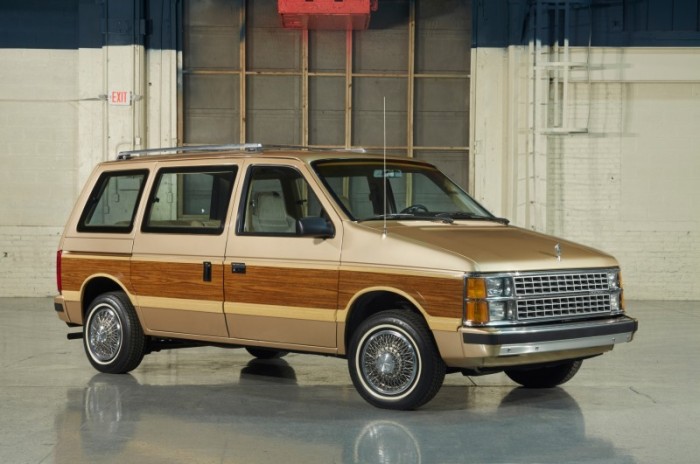 In the mid-1970s, Ford designer Hal Sperlich had an idea for a car-based front-engine van that was small enough to fit in any garage. Henry Ford II refused to let it see the light of day, and sent Sperlich packing shortly thereafter. Not long after that, Sperlich (who by now had landed at Chrysler) saw his friend and fellow thorn in Hank the Deuce’s side Lee Iacocca take Chrysler’s top job following his own banishment from Dearborn. Naturally, it was only a matter of time before Iacocca encouraged the development of Sperlich’s small, wagon-ish van.

When the fall of 1983 rolled around, Iacocca unveiled the fruits of that labor: The Dodge Caravan and its fractionally-less-spendy sister, the Plymouth Voyager. This new breed of vehicle – which was based on the humdrum K-Car’s bones – was an instant hit. Ford, GM, Volkswagen and the Japanese all tried to counter-attack with small vans based on compact pickup chassis and federalized versions of home market forward-control models, but eventually every single one wound up copying the Mopar minivans’ transverse-front-engine, front-wheel-drive layout in a unibody shell. Hell, VW even bought rebadged and restyled Grand Caravans and sold them as the Routan (The fact that it was a Cleveland steamer on the sales charts had less to do with the Pentastar bones underneath and more to do with the fact Wolfsburg decreed that it, and not a production version of the bitchin’ Microbus Concept from a few years earlier, would be the company’s lone North American van offering.)! The Caravan helped save Chrysler’s bacon and created a segment that, like the station wagon before it and the SUV/crossover after it, defined an entire generation of suburban American family life. 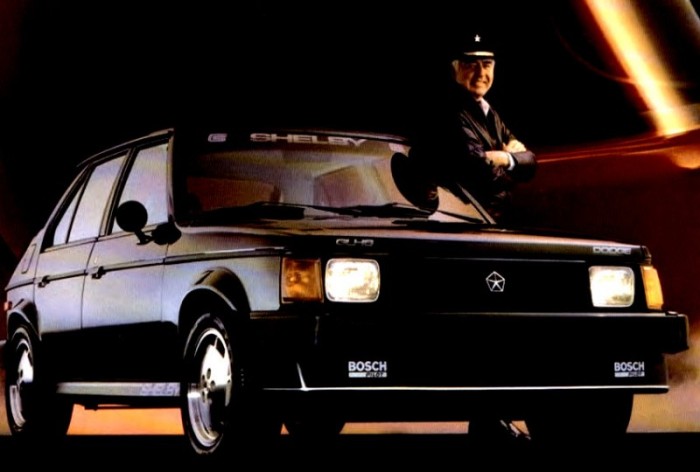 Don’t get us wrong, the “regular” Dodge Omni GLH was and is a perfectly peppy hot hatch. It’s just that the Omni GLH that was tweaked by Carroll Shelby and his merry band of hot rodders and consequently renamed the Omni GLHS (which officially-unofficially stands for “Goes Like Hell S’more”) was peppy to the point of hyperactivity. Upgrades to the normal GLH’s turbocharged 2.2L inline-four yielded a total of 175 horsepower and 175 lb.-ft of torque, which was sent to a 5-speed manual transmission and on to the front wheels. New wheels, adjustable Koni shock absorbers and a tweaked wheel alignment sharpened the handling, while a leather-wrapped shift knob and steering wheel and a sticker that took the speedometer’s scale up to 135 mph dominated the interior upgrades.

Is it fast? By the standards of the time, it was incredibly quick; with a 6.5 second 0-60 mph time, a 14.8 second quarter-mile time and a 130 mph top speed, the Omni GLHS could easily keep up with the base-V8-powered Camaros, Firebirds, Mustangs and Capris of the era, and it would be nipping at a Corvette’s heels. But because only 500 Omni GLHS hatchbacks were made in 1986 (and 1,000 Charger GLHS hatchback sport coupes the following year), insecure pony car jockeys generally didn’t have to worry about getting humiliated by a little four-pot economy car. 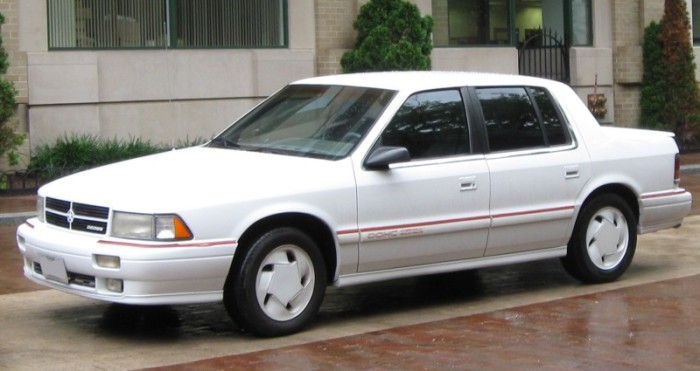 The Omni GLHS might have been the last hurrah for Dodge’s original hot hatch, but it was hardly the last tricked out turbo model from the brand. The 1991 model year saw the arrival of the Spirit R/T, a version of the boxy K-Car-derived AA-Body mid-size sedan with a thirst for blood. The 2.2L turbocharged and intercooled inline-four utilized a Lotus-designed twin-cam 16-valve head, and was rated at 224 horsepower and 217 lb.-ft of twist. A heavy-duty 5-speed manual was the only transmission allowed to send that power to the front wheels, while a sport suspension, tasteful body kit and monochromatic trim rounded out the package.

We’ve chose to highlight the second and final model year Spirit R/T due to its various detail improvements such as a 150 mph speedometer, newly available silver exterior paint (to augment the red and white carried over from ‘91) and a shorter first gear ratio to combat turbo lag. It was also made in outrageously small numbers: Just 191 U.S.-spec ’92 Spirit R/Ts were made, meaning future collectability is pretty much a given. 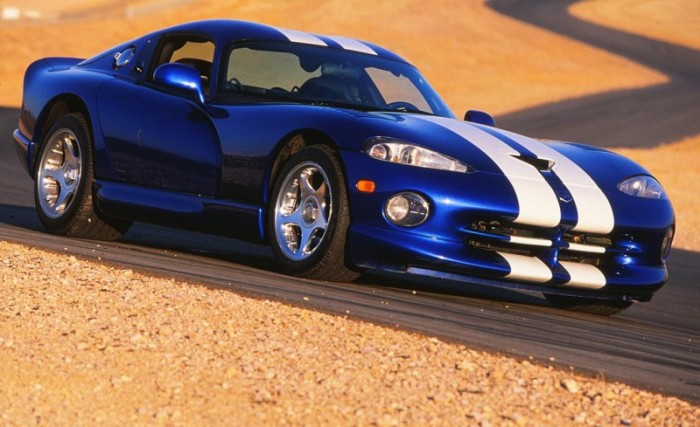 When the production Viper R/T-10 debuted as a 1992 model, it was rightly heralded as the spiritual successor to the Shelby Cobra (understandable, considering Iacocca asked his old pal Carroll to serve as a consultant on the program). However, some folks had the temerity to suggest that it was a little too faithful to that iconic Anglo-American rocket sled, particularly with regard to weather protection and leg protection (i.e. the ease with which the sidepipe exhaust would grill your calves if they touched the door sills). Four years later, Team Viper addressed those and other concerns with a fixed-roof serpent: The Viper GTS.

Ostensibly an homage to the Cobra Daytona Coupe, the GTS featured roll-up glass door windows in place of the roadster’s clear-plastic-and-fabric side curtains, a sizeable glass rear hatch, and a handsome fastback roof with Zagato-ish “double bubbles” to provide adequate clearance for a helmeted driver and passenger. Twin tailpipes relocated to the center of the rear bumper lessened the car’s shin-singeing tendencies, and an extra 50 horsepower from the 8.0L V10 (for a total of 450) under the better-ventilated clamshell hood rounded out this more refined – yet still willing to rip your face off and use it to wipe its bum at a moment’s notice – Corvette crusher. Oh, and it was also the pace car for the 1996 Indianapolis 500, the last non-GM product to hold that title. 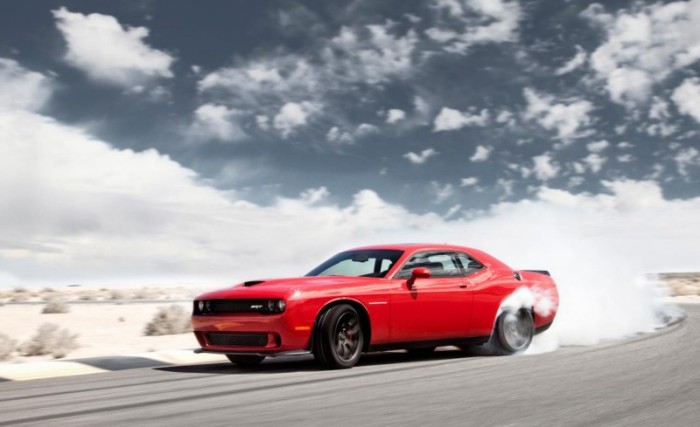 Come on, you had to know this bad mofo was going to be the last and newest entry on this list. Powered by a new 6.2L supercharged version of the Gen 3 Hemi V8 (which is also Chrysler’s first production supercharged engine – the Crossfire SRT-6‘s Mercedes-AMG derived V6 doesn’t count – and its most powerful production engine) linked to your choice of a 6-speed manual or 8-speed automatic transmission, the 707 horsepower Challenger SRT Hellcat will fling you at the horizon with way more gusto than a car with a base MSRP of around $60,000 should. The term “instant classic” may be grossly overused in automotive circles, but this is one instance where it’s absolutely appropriate.