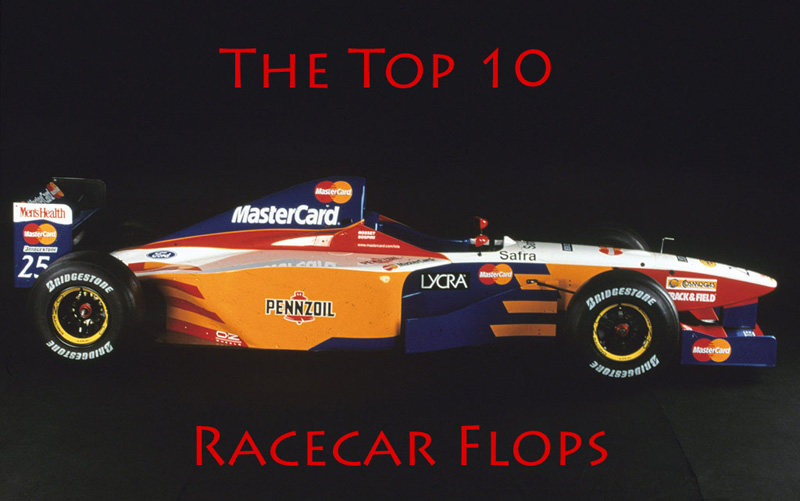 Theoretically, every racecar has the potential to be a championship contender when the team manager and drivers pull off the sheet and smile for the cameras. It isn’t until preseason testing is completed and the first race meeting is underway that it becomes apparent if a competition car is a dominator or a dud.
Of course, when a car does turn out to be the latter, there’s no shortage of finger-pointing and shouting. But the bottom line is some new racecars are just destined for failure. The following ten are the most infamous examples, cars that, for one or multiple reasons, never had a chance. 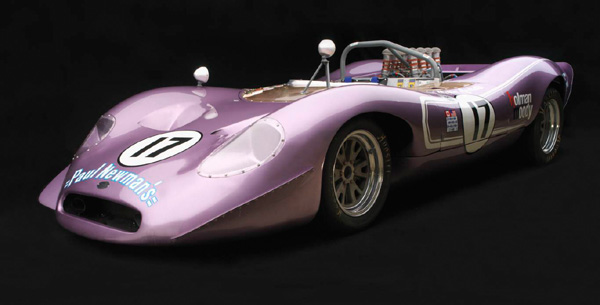 With the GT40 finding so much success on the international sports car racing scene, Ford wanted to expand that success to include a series closer to home, namely the SCCA‘s burgeoning Canadian-American Challenge Cup (Can-Am for short). So in 1967 Ford, along with its most trusted racing partners at the time, John Holman and Ralph Moody, created the Honker II (a moniker derived from Holman’s nickname), a sleek, open-top prototype powered by a 351 cubic inch (5.8L) V8 and painted in an eye-popping shade of purple. Despite being shaped in the wind tunnel, having Mario Andretti behind the wheel and having Paul Newman‘s name on the nose (He wouldn’t get truly serious about racing until he shot Winning the following year.), the Honker II just couldn’t get the job done against the Chaparral, McLaren and Lola onslaught. 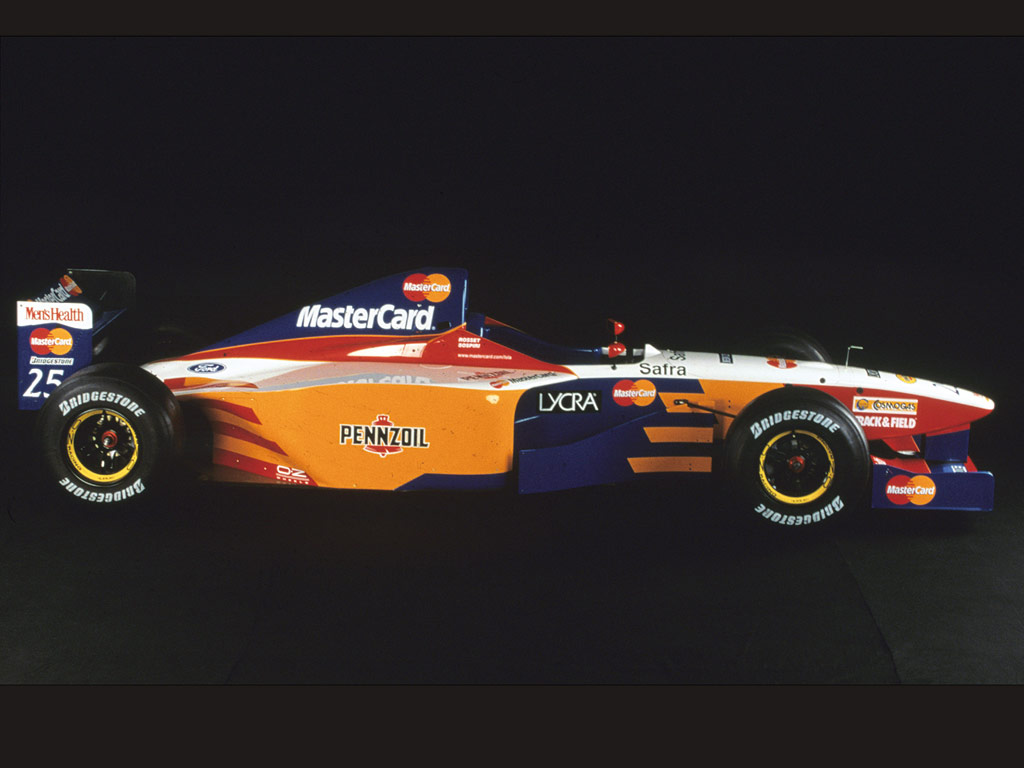 When a racecar is so suck-tacular that it breaks the back of the company that built it, you better believe it will be on this list. Such is the sad story of the Lola T97/30. In 1996, Lola Cars founder and then-head Eric Broadley announced that the British company would be fielding its own Formula 1 team in 1998. However, the team’s title sponsor, MasterCard, prodded Broadley into moving the program ahead one year. The car would use an off-the-shelf Ford Cosworth V8 since the Al Melling-designed V10 would not be ready for the start of the season, nor would there be time for wind tunnel testing.
Unsurprisingly, both T97/30s (driven by Italy’s Vincenzo Sosperi and Brazil’s Ricardo Rosset) were about a dozen seconds off 107% of the pole time at the first race in Melbourne, meaning neither made the race. The team headed to Sao Paulo for round two, but MasterCard’s hasty, embarassment-induced exit forced Lola to withdraw from the event the Wednesday before the race, and from the World Championship soon after. The whole debacle put Lola Cars 6 million pounds in the red, forcing Broadley out and the company into receivership. The firm was purchased by and has since recovered under Irish entrepreneur Martin Birrane, but it was a hell of a mess. 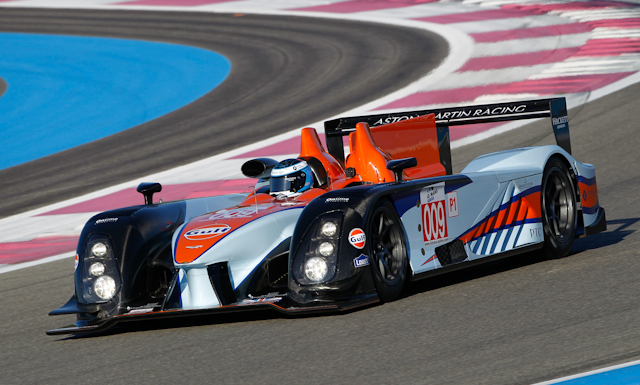 In case you think terribad race cars are a relic of the 20th century, you might have already forgotten about last year’s Aston Martin AMR-One (not to be confused with the AMR1 Group C car from 1988). And how could you not? They retired within the first handful of laps of both races they entered, including both cars dropping out of the 24 Hours of Le Mans having completed just six laps between them. And even when they were running, the open-top LMPs (which were powered by a highly unorthodox 2.0L turbocharged inline-six) were glacially slow, even compared to the other gas-powered prototypes (Their pace relative to the Audi and Peugeot diesels? Think Wright Flyer vs. Lockheed SR-71.). Aston Martin Racing finished the year with the 2010 V12-powered Lola coupes, while for this year it will focus all of its efforts on GT racing.

It’s hard to believe now, but the Indianapolis 500 used to be a showplace for innovative, off-the-wall designs. Some of them worked brilliantly, some of them not so much, but all garnered plenty of attention from rivals and spectators alike. One of the last truly unusual cars to take part in the Month of May was this curious creature, the 1982 Eagle Aircraft Flyer. This long, skinny machine, nicknamed “The Cropduster,” was powered by a normally-aspirated Chevy Small Block V8 and driven by short track standout Ken Hamilton (father of more recent Indycar driver Davey Hamilton). Unfortunately, it failed to run fast enough to qualify for the traditional 33 car field, and was never entered in another race. 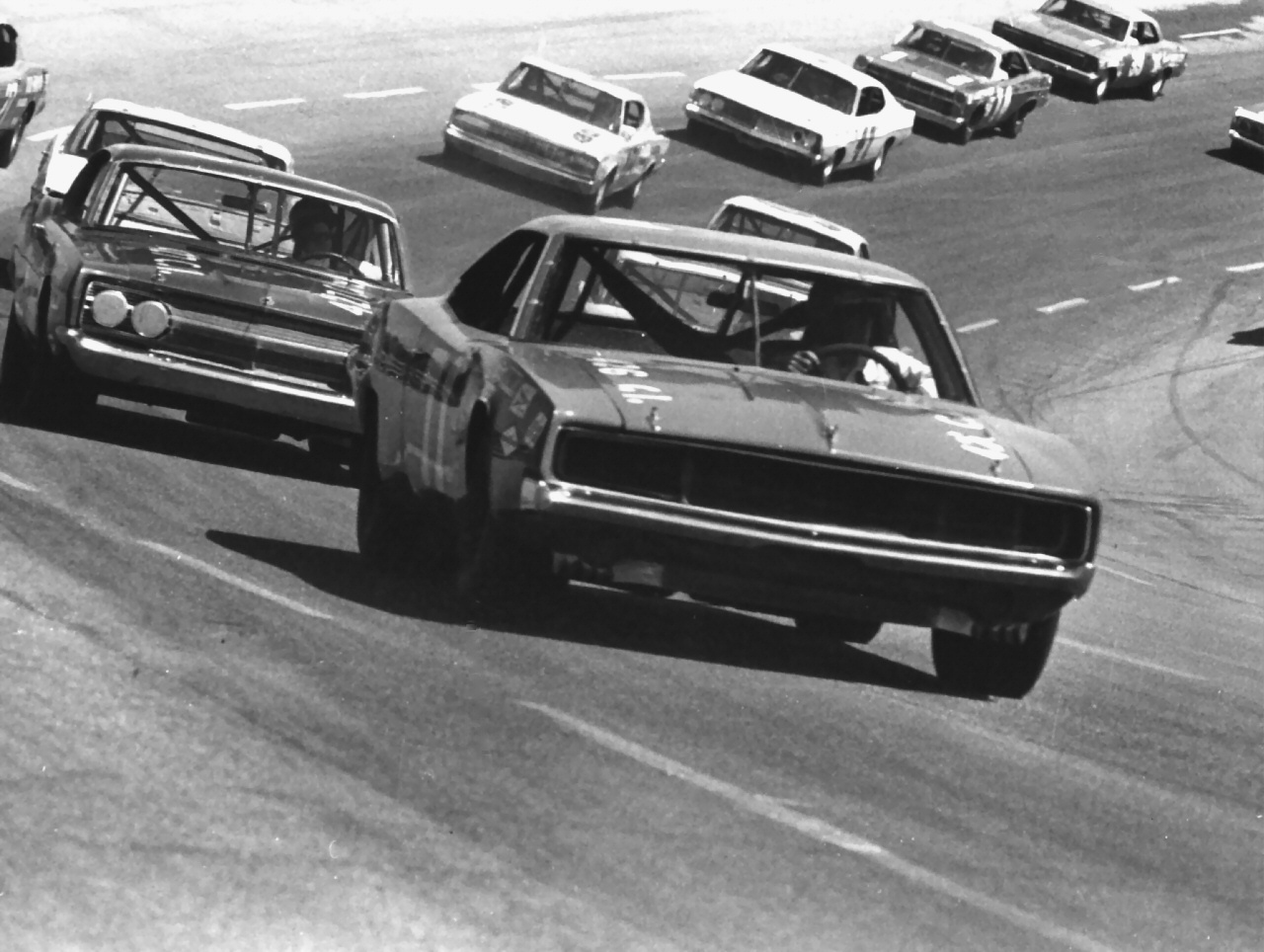 The second generation Dodge Charger, which arrived in 1968, was and still is a muscle car styling masterpiece. However, it didn’t take long for Chrysler engineers to notice that that iconic form wasn’t very functional on the high-speed ovals of NASCAR. The recessed grille and rear window added aerodynamic drag by the bucketful, enough to cancel out any advantage the mighty 426 Hemi under the hood might have provided. The blocky Dodges were no match for the equally new but much slipprier Ford Torino and Mercury Cyclone fastbacks on the big tracks, prompting Dodge to create the Charger 500 and, after that, the Charger Daytona. 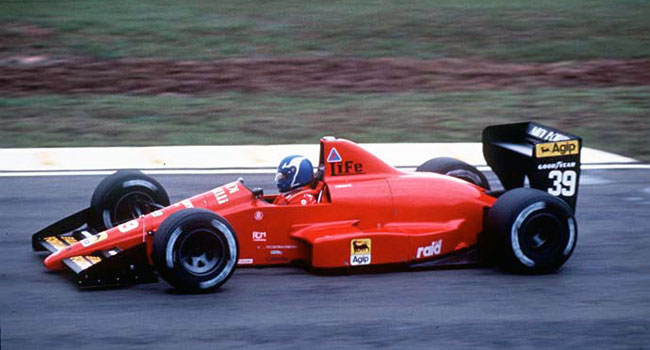 There’s a lot to be said for going against the grain and being an independent thinker. But if you’re looking for arguments against venturing outside the norm, you can’t do much better thant the story of the Life F1 team. Started by Ernesto Vita (“vita” being the Italian word for life), the team utilized its own engine, a 3.5L W12. Unlike the Volkswagen Group‘s W12, which is basically a pair of overlapping V6s, the Life W12 was three inline-fours sharing one crankshaft. Unfortunately, it was only putting down about 480hp when the frontrunning powerplants from the likes of Ferrari, Honda and Renault made between 650 and 700hp. Couple that with a year-old chassis bought from First Racing(and whose designer proclaimed it would make a better flower planter than racecar), and you have a recipe for disaster.
In 1990, Life’s first (and only) season, there were significantly more cars contesting the championship than there were grid positions, meaning the backmarker teams had to not only qualify, but pre-qualify. Of the 14 rounds the team entered, Life made it out of prequalifying exactly zero times. This despite re-equipping the car with a conventional Judd V8 for what would be its final two appearances, the first of those last two being punctuated by the engine cover (which didn’t fit over the new engine) flying off on the first lap of practice. That, boys and girls, is what you call a clusterf*ck. 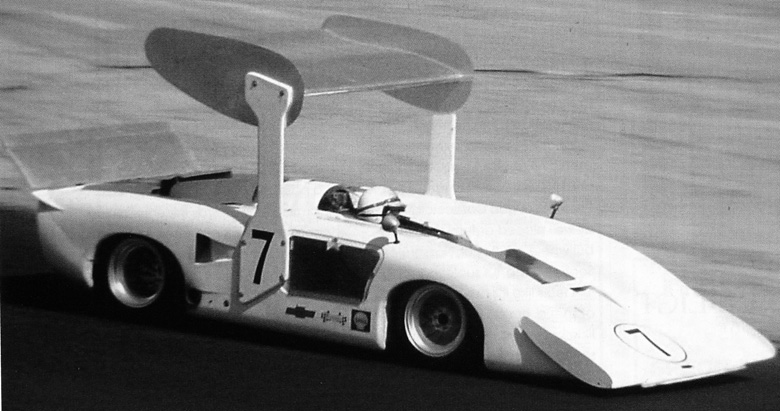 In the 1960s, some of the most innovative racecars in the world came out of the Midland, Texas shop of Chaparral Cars co-owner/designer/driver Jim Hall. The white, Chevrolet-powered sports prototypes introduced the motorsports community to things like semi-automatic transmissions and active aerodynamics. Most of Hall’s cars were winners, but the most infamous exception has to be the 2H of 1969. This curvaceous Can-Am challenger was designed to minimize drag at the expense of downforce generation. Unfortunately, the straightaway speed gains weren’t enough to offset the slower cornering speeds, even after the big wing seen above was eventually fitted. 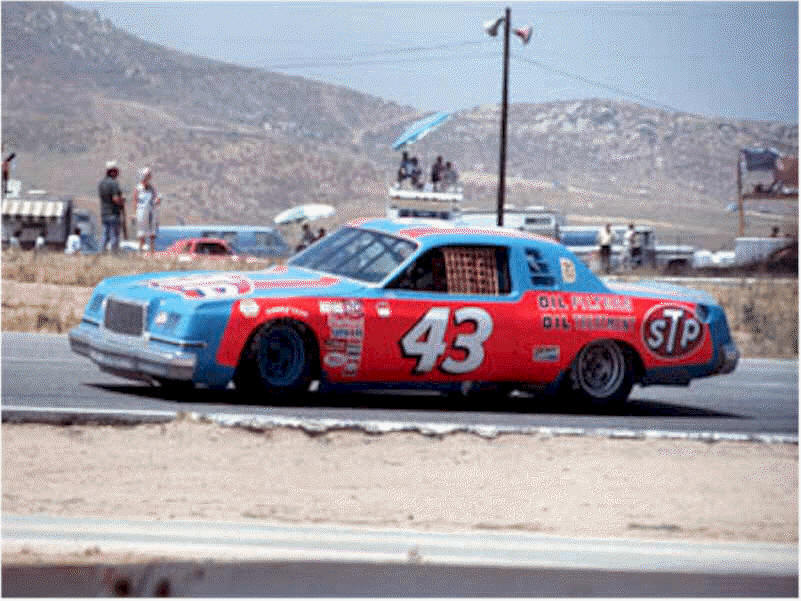 After the success of the Charger Daytona (and the third gen Charger after it), it would be easy to assume that Dodge would keep on winning in NASCAR. And the Magnum, introduced in 1978, looked like it would continue that trend. But Chrysler was no longer helping develop the 360 cubic inch (5.9L) V8 for racing by this time, and the Magnum was extremely unstable in traffic. Before the ’78 season ended, Dodge’s two remaining star factory drivers, Richard Petty and Neil Bonnett, jumped ship to GM, leaving independents to carry the flag for Mother Mopar until it disappeared altogehter from the then-Winston Cup Series in the early ’80s, not to return until 2001. 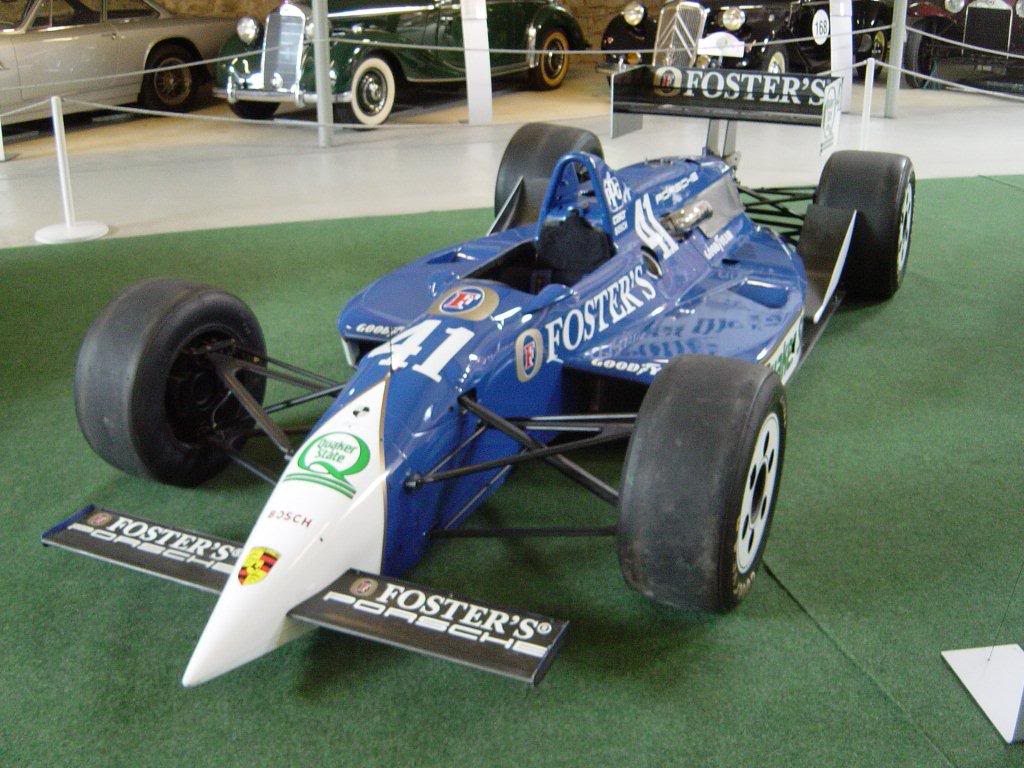 The name Porsche is synonymous with success in racing, particularly in sports cars. But when Porsche tried its hand at Indycar in the late 1980s, just about everything that could go wrong did. Porsche’s North American motorsports chief (and super-successful IMSA owner/driver) Al Holbert perished in a 1988 plane crash, the year before the company’s first full season in CART. Teo Fabi bagged the win at Mid-Ohio that year, and it looked like everything was coming up roses for 1990.
Porsche and its chassis builder, March, asked for and received permission from CART to construct the cockpit (or “tub”) entirely from carbon fiber, one year before it was scheduled to be allowed. Unhappily for Porsche, other teams (namely Penske, which made its own chassis) objected to its using a composite chassis and overturned the initial ruling. This forced March to perform an 11th hour redesign of the tub to make it a conventional, mostly aluminum construction. This delayed the whole testing program, meaning Fabi (and new hire John Andretti) basically had to use race weekends as test sessions. Suffice to say, the team went winless, and the plug was pulled at season’s end. 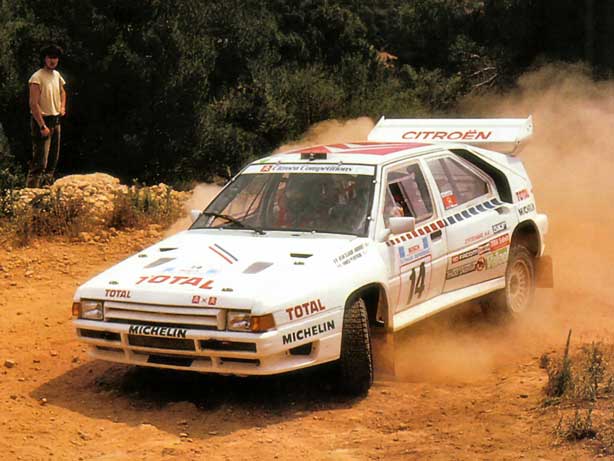 By the time Citroen rolled out the BX 4TC in 1986, the Group B supercar wars in the World Rally Championship were in full swing. Unfortunately, the perpetually quirky French brand brought the proverbial knife to the gunfight: The BX 4TC was big, heavy, front-engined (as opposed to mid-engine like the entrants from Ford, Lancia and Citroen‘s corporate cousin Peugeot) and underpowered. Not even Citroen’s famed hydropneumatic suspension system could counteract those shortcomings. After bringing up the rear in three WRC events, the company threw in the towel, and was so disgusted that it recalled and destroyed most of the 200 street legal homologation models that were built and sold. Merde, man…
Tweet
Share12
Share
Pin412
424 Shares
Categories
Motorsports
Tagged
Aston MartinCitroenDodgeFordListsLolaLola CarsMotorsportsPorscheTop 10 Lists
0
Back to Top