Top 10 Best Cars to Take on a Rally Race 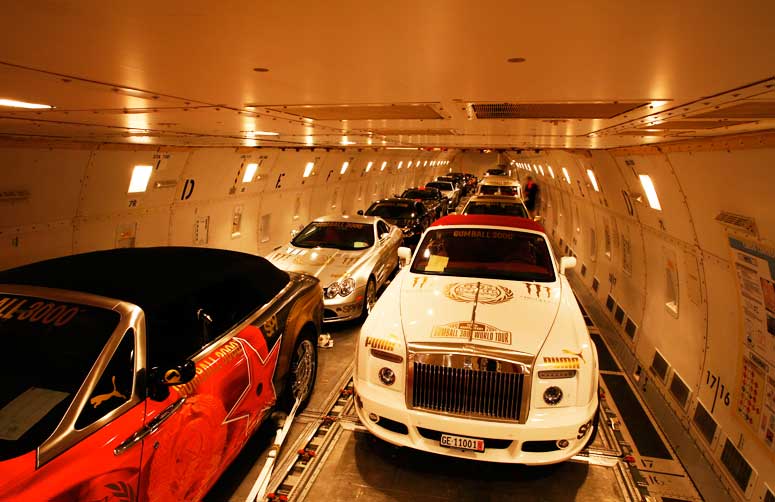 If you’re a fan of this site, you’ve probably heard about the Gumball Rally. If not, here’s the short spiel: Rich people pay about $40,000 to enter the rally, bringing their favorite 4-wheeled-account-balance with them. They cover the cars in decals and then drive thousands of miles at high speeds, travelling across countries and even oceans. Each day takes you to a new checkpoint, where there is a lavish party awaiting that would make Lindsay Lohan’s sobriety anklet explode. Several other rallies have followed suit, each providing a rich environment for speed. Sure the parties are fun, but the real reason to go is because that week is really a celebration of the automobile doing what they were meant to do: go fast.

We’ve dreamed of going on a rally for years but sadly lack the financial means. Of course the first question that pops up is, “What would you drive?” That’s a harder question to answer than you might think. Some people go for all out speed, assuming a turbo-charged big wheel would be the best and truest way to do it. Others want to cruise in total comfort, opting for the cloudy Rolls Royce Phantom. Unable to decide, we put together a list of our Top Ten Cars that are worthy to bring on a rally race. Will you choose all out speed, total comfort, or a mix? Let us know in the comments section. 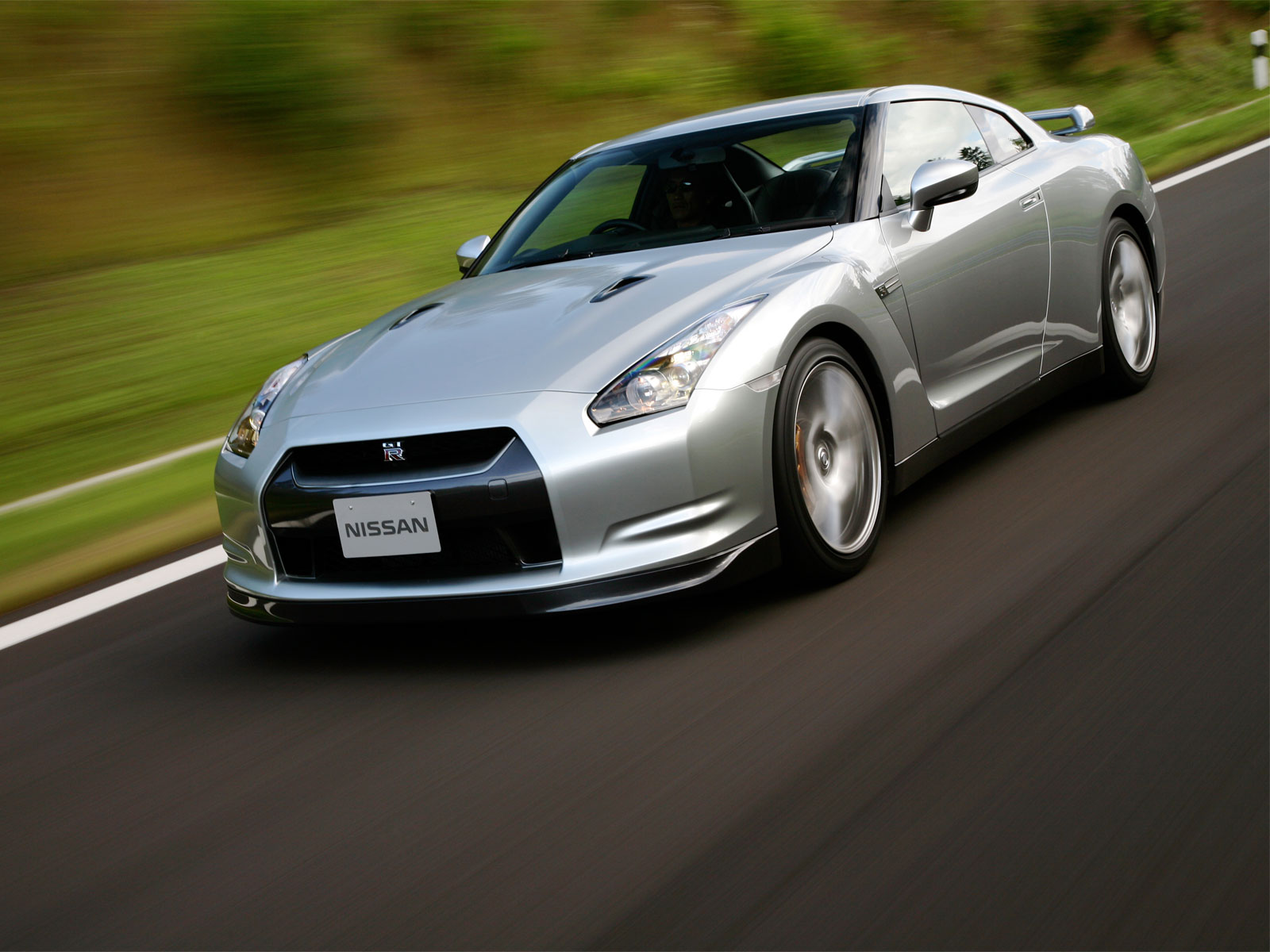 If you watch the Gumball videos you see a lot of Porsche 911 Turbos. Hardly suprising considering they pack the performance to run with almost anything yet can double duty as a comfortable GT car or daily driver. Well if you like the 911 TT for those reasons, then the GTR should make sense. It has all the performance of a 997 TT in stock form, responds to mods like dirty cop to a bribe, but unlike the 997, it’s as reliable as a sun dial. It will go 190+mph, has AWD and is as stable as a brick of lead (it weighs almost as much too). Add to that 2 backs seats for any new party friends you meet – and the fact it’s half the price of the German – and you have a car that carries more fun for less money. And with the various tuning packages available from Switzer, you can take those friends on a game we like to call “Making Veyrons Cry.” Minimal “show” but plenty of “go. “ 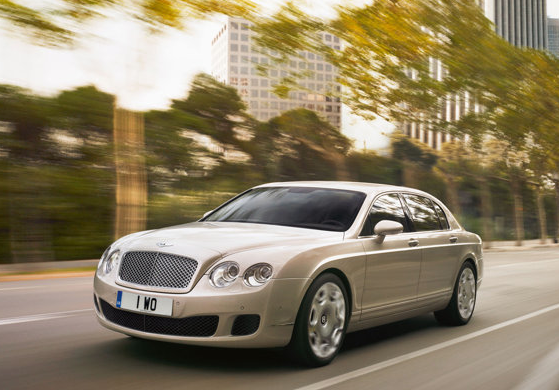 For some people a rally is about all out speed. They think the only way to do it right is in a turbo Lotus with no roof and your passenger has to sit on your head. Well some of us are older and don’t have necks that can withstand that kind of pressure. Or maybe you just want to be comfortable, or in the case of the Bentley Continental Flying Spur very very comfortable. With four chairs wrapped in the softest leather available you and 3 friends will travel on a steel cloud so nice you’ll opt to sleep in it over your 4-star hotel room. And don’t think 4 doors means it’s not fast. With the same 600hp W-12 as the Continental GT, this 5,500lb bus of diamonds hits 60mph in under 5 seconds. Shove the go pedal to the extra-thick llama carpet and you’ll best 200mph, walking by those “badasses” bumping along in their F430s. If you want to show the girls at the party you’ve arrived and have room to take them with you, this is your car. 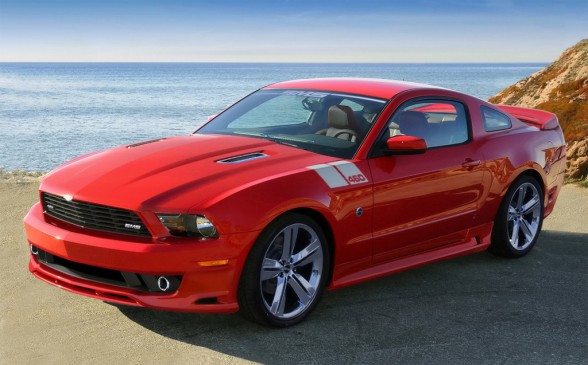 While the Gumball is often held abroad, it and other rallies do plenty of events in America. On a rally in the U.S. you will not only be treated to the finest gas station cuisine and backwoods tourist stops (See an alligator eat a Democrat!) you will probably get to meet members of our fine law enforcement agencies. Cops hate reckless speeding, but nothing pisses them off like a guy with lots of hair gel doing 160 in a red Ferrari. You might as well have sex with Officer Madashell’s mother, because that’s how he’ll view you.

This is where the SMS Mustang comes in handy. Cops have a place deep in their heart for American iron. In high school me and my hot rod friends got pulled over weekly, yet none of us ever receieved a citation. Why? Because we were driving cars that reminded these guys of their childhood; Camaros, Mustangs, GTOs, etc. And even if the policeman grew up in the 80’s and his mom drove a LeBaron, he will at least give you a nod for driving something made in America. But don’t think you’re sacrificing anything with the Steve Saleen built SMS 460. The factory 4.6L V8 is bored out to 5.0 liters, and then supercharged. It’s force-fed air until it belts out 655hp and 600 ft lbs of torque. A complete aero kit keeps things stable, while a leather and Alcantara covered interior won’t make you feel like you’re driving at the kid’s table. We can’t promise it’ll help with Johnny Law, but it can’t hurt. Unless the rally takes you to France… 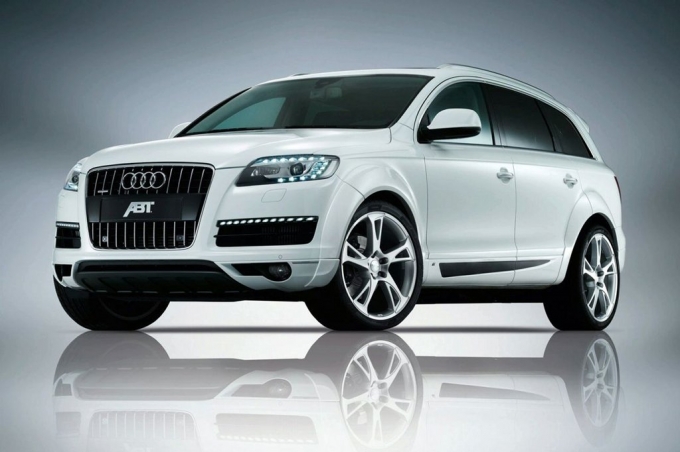 “A diesel? What do you think we’re doing, hauling logs here?” No, let us explain. While these rallies can’t call it a race for legal reasons, there are still prizes awarded for first place finishers. How you get there first is up to you (navigation…right). As my friend Alex Roy taught me, getting somewhere fast isn’t about bursts of 170mph, it’s about the law of averages. Anyone can go 160mph for 30 seconds, but how about averaging 85mph? Sounds easy, but averaging that speed for 3,000 miles is far from simple. One way to do this is to make fewer stops, and that’s hard when you’re driving an LP670 that gets 14 mpg.

Supercars certainly have their place at a rally, but you will also see plenty of SUVs, trucks and other non-speed demons. That’s where the Abt Q7 comes in. Abt took Audi best SUV and was able to give it a little more speed without sacrificing a drop of fuel economy. The tuned  Q7 has only 287hp, but also has 427ft lbs of torque, all the while getting 25mpg. With a 26 gallon fuel tank, that’s a range of 650 miles. The inside is by Audi, so you know it’s comfortable, luxurious and well-equipped for all your multi-media needs, something your 6 passengers will appreciate. With this Q7 you could win the rally, and bring the victory party with you. 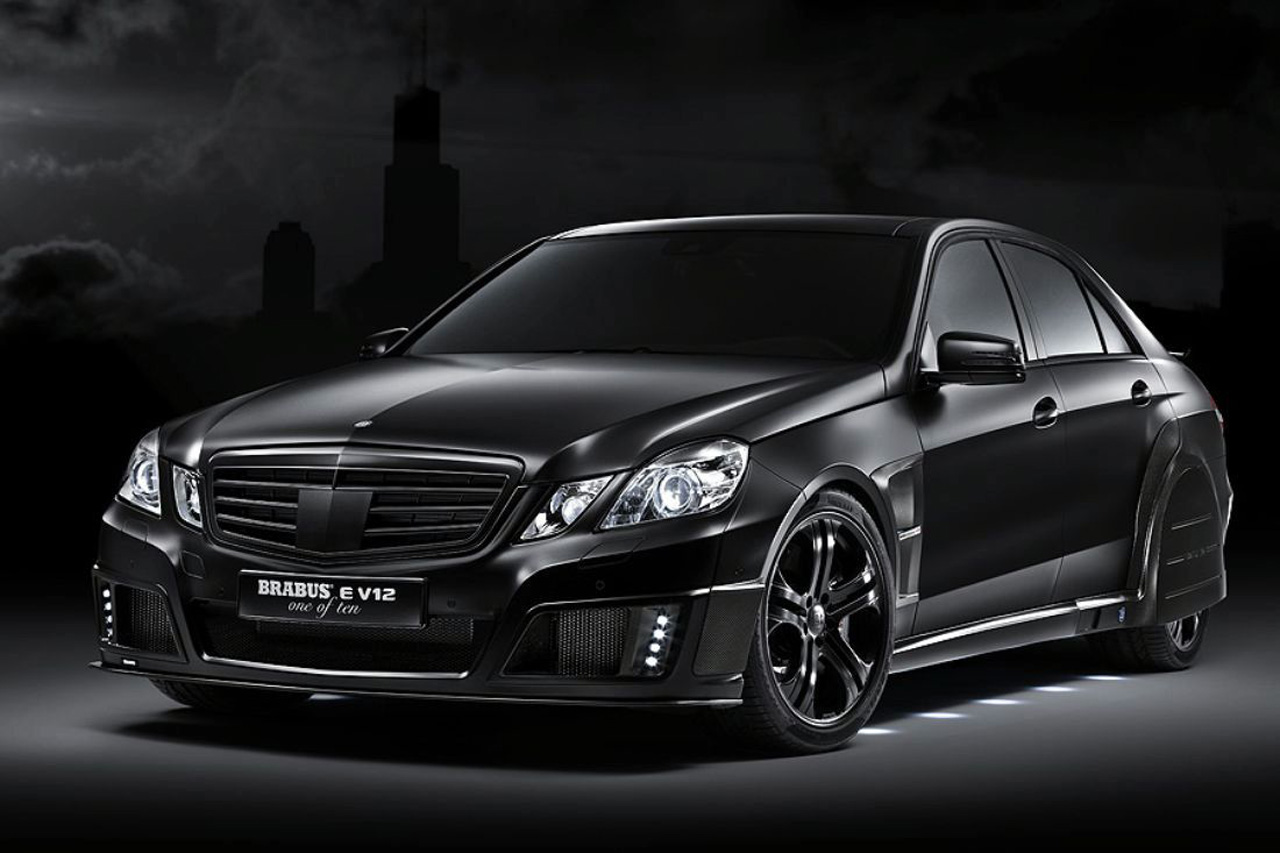 So you decided to do a rally, but you can’t decide what car to bring. Sure the cramped, insane 241mph Koenigsegg CCR would be fun, but there’s barely enough room for a PEZ in the trunk. You could bring the new E 63 AMG, but you know you’ll miss that speed once the road gets long and straight. Enter the Brabus E-V12 “One of Ten.” Handing your Mercedes to BRABUS is like giving Einstein your firecrackers; they take things nuclear. It should be obvious from the picture, but this is no ordinary BRABUS car. This car was designed to be the fastest sedan in the world.

The engine is bored out and fitted with two turbos, resulting in 800hp and the torque, which was de-tuned from 1,047, is 811 ft. lbs. Of course the supporting mods are maxed out as well; multi-adjustable coilovers, special wheels, and 12 piston brakes. The track is widened by 32mm, and the fenders are replaced with carbon fiber. For some extra stability “icing” on this rocket cake, BRABUS made carbon fiber covers for the rear wheels. From the wind-tunnel tested body kit to the ridiculous engine, this car was built to take 4 people from 0-186mph in 23 seconds. Still missing the CCR? Doubt it. 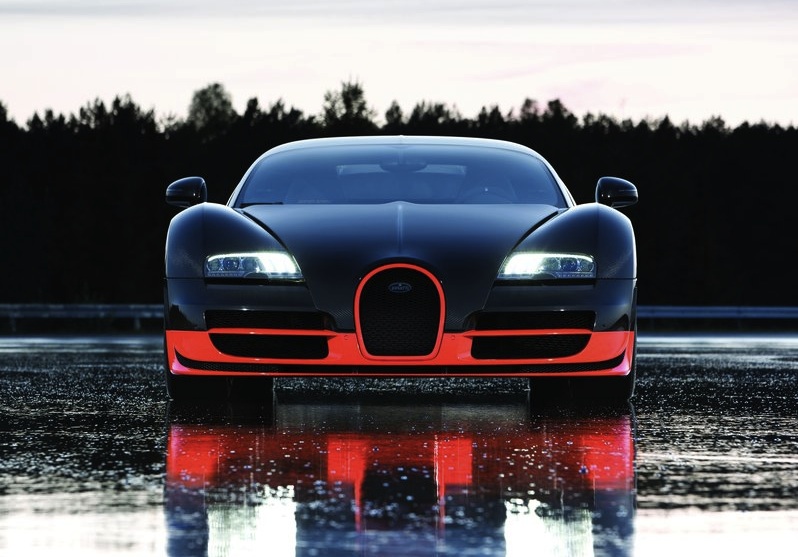 Because it’s the fastest car in the world. Nuff said… 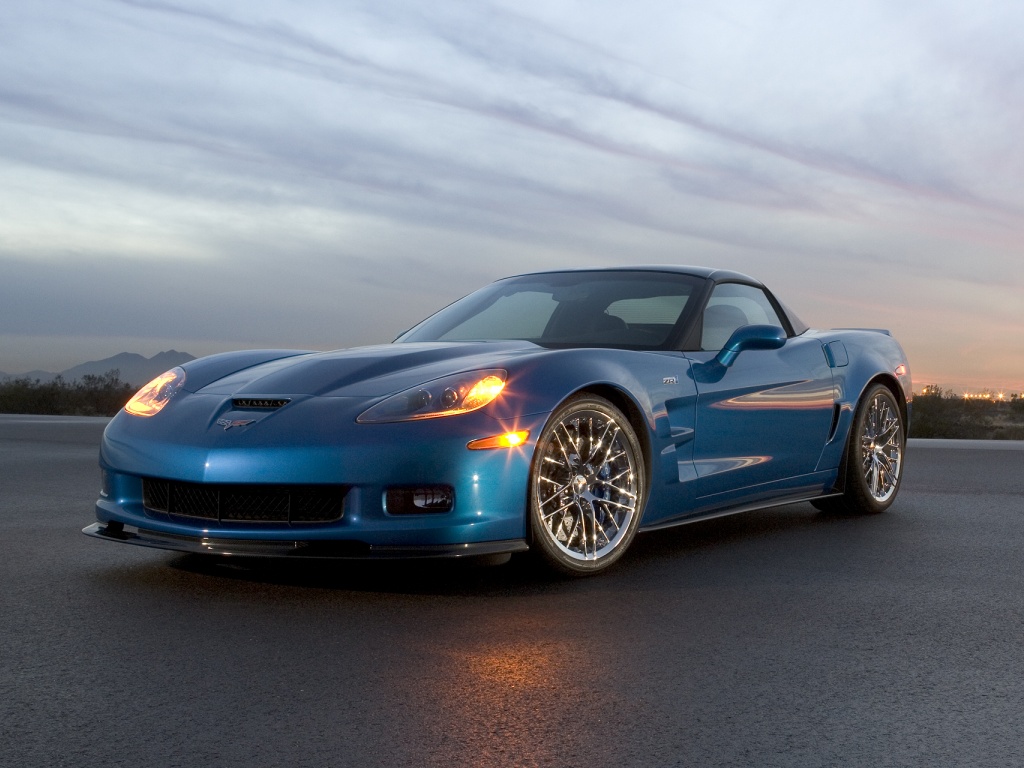 Unlike the Mustang, this is an American car that is loved internationally. Even Jeremy Clarkson, who generally talks about American cars the way we talk about British women, loved it. And what’s not to love? Few cars on the road can match the performance of the Corvette ZR-1. The supercharged LS9 puts 620hp at your disposal, making the ZR-1 able to run with the fastest Italian horses around. But unlike high-performance Vettes of old, the ZR-1 comes with Magnetic Selective Ride Control. So while the guy next to you is taking a beating from his GT3 RS that requires intubation, the ZR-1 cruises along. And should your rally have a stop at a racetrack, you’ll have one of the most capable cars there, if you can handle it.

When gas prices skyrocketed we thought it was the sports car’s death rattle. The Prius was quickly moving up the ranks, being looked at as some sort of mesiah of automobiles. Expecting a future of boring electro-boxes I was ready to pop a Cyanide capsule. BUt the future isn’t all bad, thanks to Fisker. This car is fantastic looking. It’s easily the coolest looking 4-door design I’ve seen.

And thanks to its hybrid powertrain, you could finish the rally in green-friendly style while your high-octane comrades go bankrupt making fuel stop after fuel stop. A 2.0 liter EcoTech motor is mated to dual 22Kw/H electric motors, giving the Karma a possible 67mpg and a range of 620 miles. And unlike the Prius, it won’t make you so bored you’ll drive off a cliff. Those motors are good for a respectable sprint of 5.8 seconds to 60 and a very illegal 125mph.The only problem is timing, since production for the Karma has been pushed back 3 times, all the way to (hopefully) 2011. 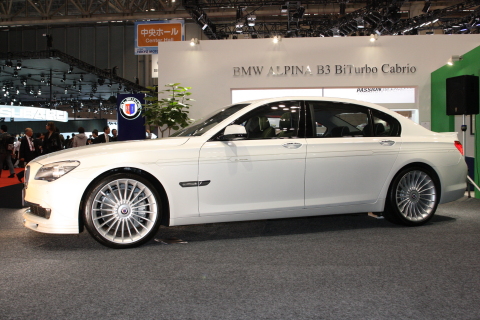 We brought you the Alpina B7 LWB (long wheel base) after our trip to the Tokyo Motor Show in 2009. It’s essentially a leer jet for the road. Ushered along by a 500hp twin-turbo V8 and with enough leg-room in the back for Shaq this is how you do a rally if you have a hired driver and don’t want a lot of attention. To anyone not in the know it looks like a BMW 7 series, but launching to 60mph in under 5 seconds will probably make them think again. Alpina has always been known for its handling, so the B7 won’t roll like a pig if you’re climbing the Alps. The interior is pure luxury, with every piece of BMW plastic replaced with high-grade wood and leather. When you wake up at 7am after going to bed at 5 and feel like crawling into a dark, quiet hole while someone else man’s the controls, this is the car you want. 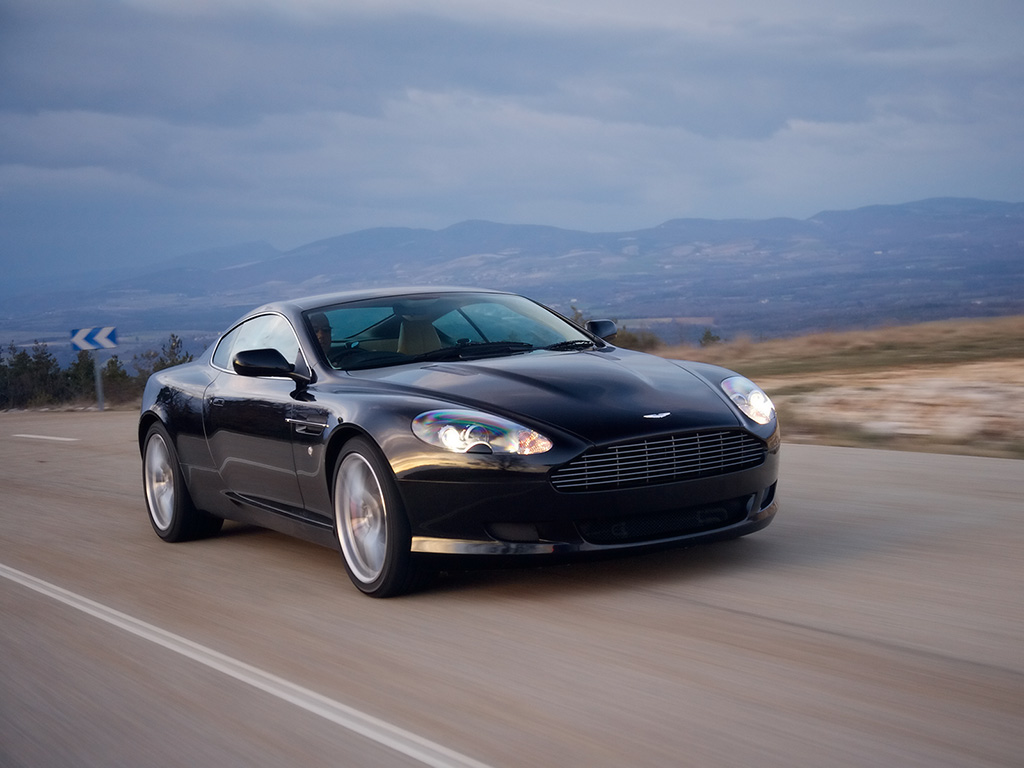 A list of rally-ready cars wouldn’t be complete with at least one car from the geniuses known as Aston Martin. The DB9 was never praised as a race car, because it wasn’t trying to be one. What it was trying – and succeeded – to be is one of the best Grand Touring cars ever. Powered by a 6.0L 470hp V-12 it barrels down the road like a runaway missile. The long wheelbase makes it as stable as gravity and the ZF transmission means you can be a racer boy or a grandpa as you choose. It has a trunk that can actually hold stuff and 2 back seats, which I manage to use even if I’m driving alone. And there’s no essay necessary about the look, which is nearing perfection. The DB9 is a little of everything you need, wrapped up in the best-looking box on the road.