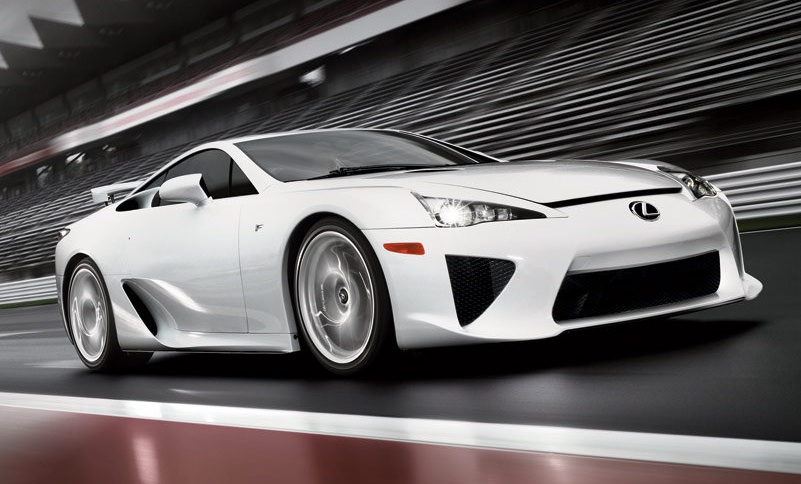 The Lexus LFA was first unveiled at the Detroit Auto Show back in 2005 as a concept vehicle. Since then it has made appearances in various iterations with no end in sight. Even though it was often spotted in disguise in the wild, rumors persisted that the car wasn’t going to move over to the mass market. The speculation is finally over as the 2011 Lexus LFA has been officially released in full production form at this year’s Tokyo Motor Show, and it was worth the wait.

The new rear-drive supercar from Lexus delivers… A 4.8-liter V10 engine with 552 bhp and 354 lb-ft of torque propel the car from 0-62 mph in 3.7 seconds with a top speed of 202 mph. The LFA features a six-speed sequential gearbox with 4 different driving modes. Amazingly enough, 90% of peak torque is delivered between 3,700 rpm and the redline of 9,000 rpm. Large high-performance carbon ceramic disc brakes and some electronic assistance provide powerful and stable stopping power.

The Japanese supercar wars are definitely heating up again. Until Acura releases a reinvigorated NSX, the Nissan GT-R is the benchmark for comparison. The premium version of the 2010 R35 Godzilla will set you back a mere $83,040, which is actually considered a bargain. And you get 485 horsepower delivered to all 4 wheels with 0-62 mph sprint times in the 3.3 second range.

The 2011 Lexus LFA has a price set at an atmospheric $375,000. In order to keep things exclusive (if the price wasn’t enough), only 500 units will be produced. That said, both the Lexus and GT-R serve different interests within the supercar genre. Whereas the GTR has brute and brawn, the Lexus LFA has amazing fit and finish, top-notch components and the cache of a luxury brand. What is doesn’t have is Italian heritage and with a price premium compared to most Lamborghini and Ferrari models, it may be a mental stretch for some to associate the word “Lexus” and “Supercar.”