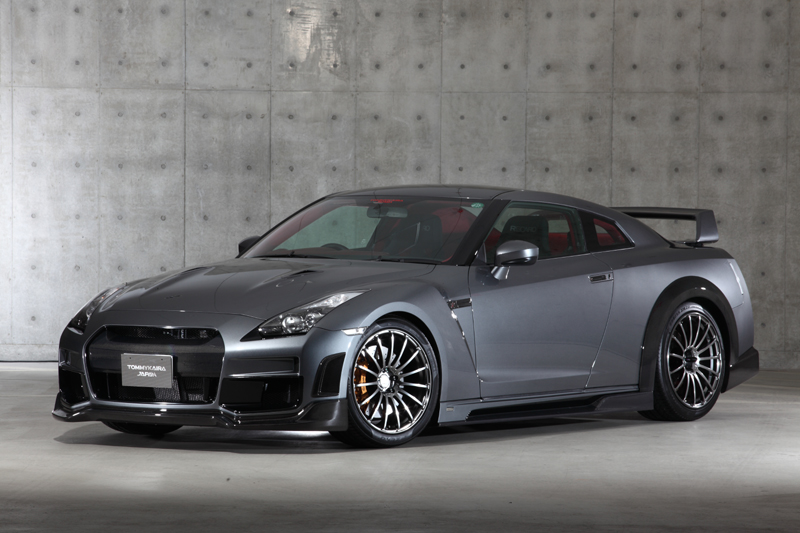 Tommy Kaira is a Japanese tuning shop that has made a big name for itself by putting out some of the baddest (like bad meaning good) modification packages on the planet. Strangely enough, they got their start tinkering models from Mercedes but now focus exclusively on domestic rides from manufacturers like Nissan, Toyota and Subaru. And those outside Japan may have gotten their introduction through the Gran Turismo racing series, where Tommy Kaira makes a strong showing.

Now, at the 2010 Tokyo Auto Salon, the company is unveiling their latest package for the Nissan R35 GT-R. Known as the Silver Wolf edition, their take on Godzilla gets a full body kit, upgraded brakes, exhaust system and suspension components along with some new wheels and a revamped interior.

The Silver Wolf aero kit has gobs of carbon fiber which comprise the bumper, front lip spoiler, front lower diffuser, side skirts, rear lower spoiler, rear diffuser and rear wing. The brakes are sourced from Endless Calipers and either the Mono 6 or Mono 6R caliper kit can be installed front and rear. The Tommy Kaira exhaust system is manufactured by the folks that crank out the Nissan SpecV exhaust system, so the same Super Tough Titanium (STTI) material is used. The Quantum suspension system is still being tweaked so there is no specific information on what the final mods will include.

Under the hood, the engine has been left untouched. But don’t let out a sigh of dissapointment. Based on the company’s modus operandi, look for there to be some nice performance improvements overall. And we can’t imagine that the Japanese ECU speed limited of 180km/h that’s still in place will stay that way for long!

Inside, the Tommy Kaira Silver Wolf Nissan GT-R is bathed in red leather upholstery, suede and carbon fiber. It looks a little Mansory-esk and may be a bit overdone for show purposes but we definitely see the potential.The Recaro racing seats are a nice touch as the stock buckets are pretty chunky. In fact, by adding some luxurious appointments and giving the seating an overhaul, Tommy Kaira brings the Nissan GT-R a big step closer to being on par with the fit and finish inside the Porsche 911 GT2.

The R35 Nissan GT-R is a car that is not so easy to improve on, but Tommy Kaira did a commendable job. The Silver Wolf is scheduled to hit the Fuji Speedway after the suspension adjustments have been made and it will be very interesting to see the performance specs. That said, we’d love to see this car get the Switzer Performance P800 overhaul, which looks to be the perfect match between form and function.