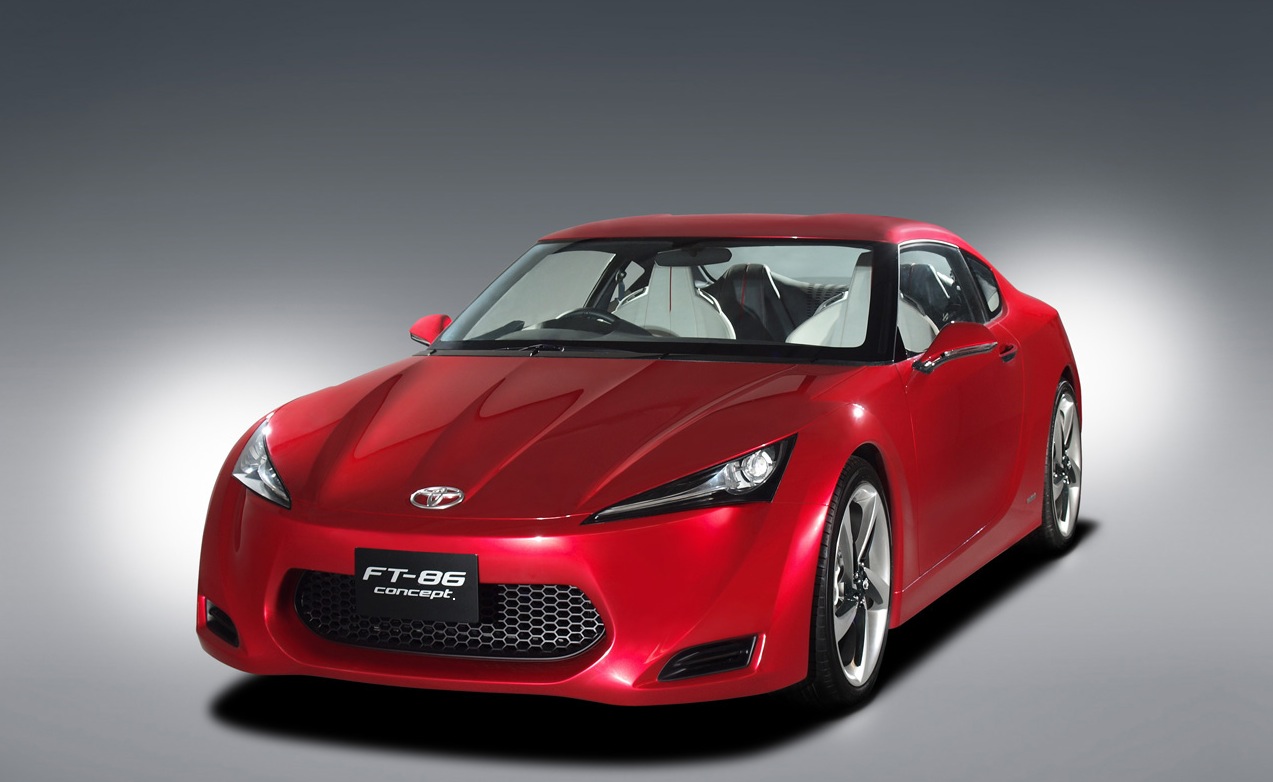 The AE-86 is back. After a long vacation, and apparently some great plastic surgery, the little drifter that could may return to appease the masses of cheap RWD aficionados. This concept, dubbed the Toyota FT-86 or Hachi Roku, follows the same formula as the original: small engine, 2 doors, rear wheel drive and tight suspension. Toyota said that the auto market has become so focused on being green, eco-friendly and saving baby hummingbirds that they forgot some people like to keep their heart beating when they drive a car. Fine, some people get excited behind the wheel of their soap-shaped whale-saver. They watch the computer screen that tells them how great their mileage is at that exact moment, with little moving arrows that show whether the power source is the gasoline engine or the batteries. It’s ironic for Toyota to acknowledge the lack of sporty cars, since they basically created the current hybrid craze when they introduced the Prius. But I tip my hat to them, because the first step in recovery is admitting you have a problem.

So their solution is the FT-86 Concept you see here. It will be a 2 door coupe with seating for four. The power will come from a 2.0 liter opposed 4-cylinder, to keep the center of gravity low. A 6 speed manual delivers power to the rear wheels. Toyota also promises ADVICS brakes and a “race-tuned” suspension. Hopefully that carries a little more weight than the “S” badge on their last Corolla. The car is no doubt aimed at the younger driving enthusiast on a budget, the same market that the new Genesis Coupe competes for. I’m sure a lot of people will be hoping for a turbo-charged version of this car and although the original AE86 did not come with a turbo option, Toyota would be silly to leave that off the table. The tuning market has become such a big business that car companies are finally giving the masses production versions of what has been built in cold garages for years. It’s that popularity that pushed Hyundai to make a “Track Pack” version of the Genesis Coupe, and made the WRX and Evolution such a success. Toyota will hopefully offer several engines; an efficient NA 2.0-liter to keep the gas-conscious happy, and a boosted version to give this car the heart-beat it deserves.

The body of the car is a sexy combination of supple curves and sharp angles, also similar to the Genesis. The aggressive face has a large fascia to pull in cold air, a muscular-looking hood, and headlights that look downright pissed. It’s a simple look, but it works. The profile is aggressive, with flared fenders, thick rear haunches, and a thick C-pillar. The proportions are very sporty, almost R8-like (Don’t worry, the Audi R8 is still way way cooler). In back there is a racey-looking trunk-lid and the taillights match the front’s “slitted” look. Dual exhaust and a diffuser complete the package. The interior is pure concept-car, with weird lights, alien-looking panels, and some gimmicks. For example, instead of a normal CD drive, the car has a leather-bound zipper in the dashboard where you insert your CD or DVD. Yeah, that won’t scratch your favorite driving CD. The sharp points are carried over from the outside, as seen on the HVAC vents, pedals, and even the rear-view mirror. This could be a safety feature though. If you’re ever attacked in your car, just break off a piece of interior trim and use it as a weapon — it looks like it would go through Kevlar.

Overall, I am impressed. I liked the look of the Genesis Coupe when it came out, and I think this car looks even better. The Toyota FT-86 Concept looks good from end to end, and the aggressive look is everywhere. I’m always disappointed when someone builds a car with a front end that looks like it will break the sound barrier, yet the rest of the car looks like it was bred to sit in a Hertz stable. I think Toyota is right on the money with the philosophy for this car. While people know that our world’s attitude toward gasoline and greenhouse gasses has to change, they don’t want to live their lives without any passion whatsoever. And while I have plenty of hobbies and passions outside of canyon-carving, none of them can replicate that particular excitement. I can listen to Blues Music, and appreciate the artistry, the complexity of the notes, and the story that it tells. But it will never get me up and out of my chair the way a great Metallica song will. The FT-86 is set to debut at the Tokyo Auto Show this year. Let’s just hope Toyota makes this car correctly, with a proper engine, so it’s not the next Corolla S. That would be like keeping a John Tesh CD in the Metallica case. You’re not fooling anyone.

Check out the Toyota FT-86 Concept in Gran Turismo 5 battling an old AE86 at Tsukuba: