The Top 5 American Cars that Were Born Too Soon

Time, the cliché claims, waits for no man. Yet there are many occasions where man has declined to wait for time, being too far ahead of the curve, if you will. The history of the American automobile industry is rife with situations where a car company – usually one of the many small independents that used to act as the minnows swimming among the GM, Ford and Chrysler sharks – came out with a clever new vehicle that would have sold like gangbusters if only it had come along years or decades later than it did. Here are five such automobiles that were born too soon for their (or their makers’) own good.

As the 1950s gave way to the 1960s, tailfins and chrome out the wazoo were out and cleaner, simpler design cues were in. Compact car sales were also on the way up, though nothing like how they would be a decade or so later. It was in this environment that Chrysler released totally redesigned full-size models for Plymouth and Dodge for the 1962 model year. The styling was less flamboyant (though both featured a few wacky Exnerian flourishes), yes, but that wasn’t the thing that had the motoring world’s collective jaw flapping; no, the real talking point was that both marques’ “big” cars were considerably smaller than their 1961 predecessors. Both the Plymouth and Dodge rode on 116” wheelbases (as opposed to the 122” wheelbase of the ’61 Dodge Polara and the station wagons and 118” wheelbase of the Dodge Dart and all non-wagon Plymouths), while width dropped from roughly 78 inches to about 72.

Why the sudden and severe case of shrinkage, you ask? The story goes that Chrysler’s CEO at the time, William Newberg, overheard Chevrolet’s Ed Cole talking about his company’s new model that was going to sit on a very petite wheelbase. Thinking Cole was referring to the Impala and the other big Chevys, Newberg instigated an 11th hour crash-program to shrink the Plymouth and Dodge biggies. As it turned out, the subject of Cole’s verbiage was the new compact Chevy II. Unsurprisingly, dealers and consumers alike were up in arms (though the Dodge folks were placated by the midyear introduction of the Custom 880 series, which was little more than a Chrysler Newport wearing warmed-over ’61 Dodge front bodywork) over the new “plucked turkeys,” and Newberg was soon sent packing (though it was more for having financial interests in parts suppliers than to his born-from-bad-intel downsizing decision).

The downsized ‘62s set Mother Mopar’s two budget brands back years. The irony, of course, is that had the same decision been made about 10 years later, Chrysler would have been primed and ready when the first OPEC oil embargo hit and car buyers scrambled toward smaller, less thirsty rides. GM didn’t shrink its big cars until 1977, and Ford and Chrysler took another two years to do likewise, so alternate-history Chrysler certainly would have caught its rivals with their drawers on the floor. Alas, it was a case of too much, too soon. 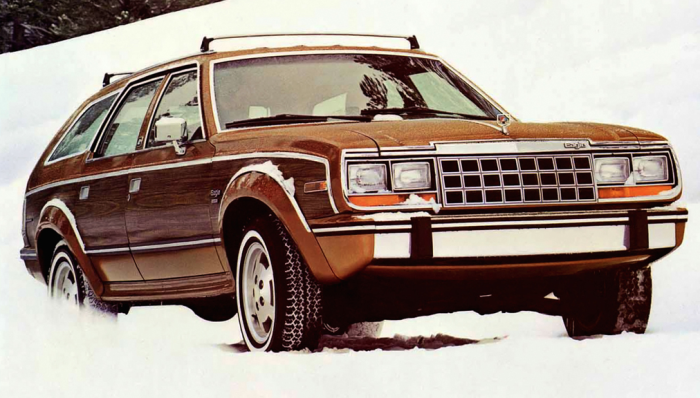 In August 1979, while the author’s parents were tying the knot, American Motors introduced the Eagle family of vehicles. Based on the Concord range (which was itself an evolution of the Hornet range), these unusual machines combined passenger car bodies – coupe, sedan and station wagon – with a 3” taller ride height and a permanent all-wheel-drive system; a system that allowed for manual switching between rear- and all-wheel-drive replaced it part way through the 1981 model year The 1981 model year also saw the debut of two additional Eagle models based on the shorter Spirit platform: The SX/4, which was a two-door hatchback with a sloping rear window, and the Eagle Kammback, a two-door hatchback with a much more upright rear end that could trace its lineage to the Gremlin.

The Eagle was intended to serve as a stepping stone of sorts between the rear-drive Concord and Spirit car lines and Jeep’s product line (Jeep being part of AMC since 1970), and it filled that role exactly as intended, gaining a cult following almost right out of the gate. Had U.S. new car buyers been ready for crossover utility vehicles and AWD-station-wagons-on-stilts back in the early 1980s, we might not be talking about AMC in the past tense today… 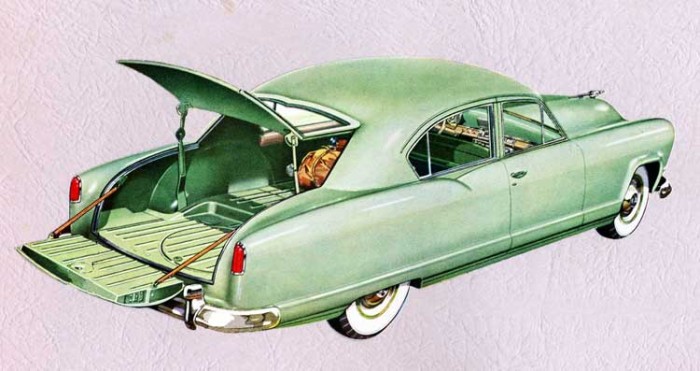 For decades, car buyers have taken the availability of hatchback body styles for granted. However, it wasn’t until after World War II that the idea started to gain traction with designers. One of the first firms to put hatchbacks into production was Kaiser-Frazer, the company started by industrialist (and the man behind what’s now Kaiser Permanente) Henry Kaiser and former Chrysler executive (and George Washington descendent) Joseph Frazer.

At first glance, the 1949 Kaiser Traveler and Frazer Vagabond looked like the standard four-door (later joined by two-door) sedans on which they were based. However, if you were to pop the trunklid, you’d quickly realize that it extended upward to include the back window, the lower portion of the trunklid folded down to form a tailgate, and the rear seats could be folded flat. It was a novel and groundbreaking concept, but it wasn’t enough to secure the future of either marque: Mr. Kaiser and Mr. Frazer had a falling out that resulted in the latter’s departure in 1951 (resulting in the end of Frazer-branded cars), while the Kaiser nameplate disappeared after 1955. However, the parent company remained in the automotive business through 1970 as the maker of Jeep vehicles, Kaiser having acquired the brand with the 1953 buyout of Willys-Overland. 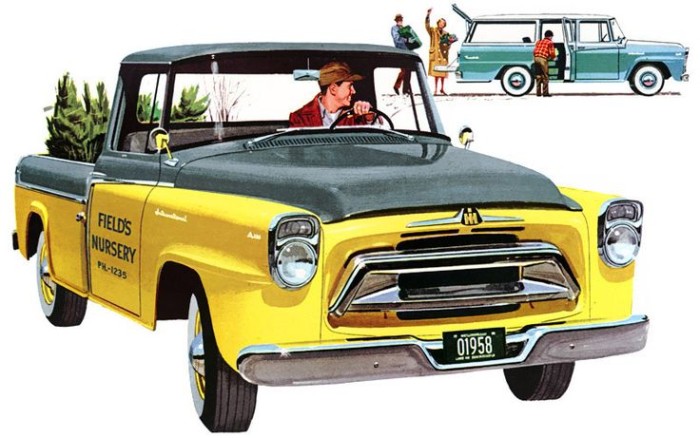 Considering how lucrative the full-size pickup truck and SUV markets are, it’s no wonder that Toyota and Nissan are actively waging war against the Detroit Three in both segments. However, those two Japanese giants are by no means the first to challenge GM, Ford and Chrysler on this turf. Beginning in 1907, International Harvester (yes, the farm implement company) built its own line of light trucks, however it arguably didn’t hit its stride until the R-Series pickups arrived in 1953. That same year saw the introduction of the Travelall, an enclosed station wagon version of the R-Series in the same mold as the Chevrolet/GMC Suburban and the Dodge Town Wagon (which arrived the following year). The compact Scout (designed to take on Jeep) came along in 1961.

While Illinois-based International might not have had the resources of the Detroit Three, it did have a knack for innovation. For example: The 1958 redesign of the Travelall saw a rear passenger side door added to the options list, while the all-new ’61 model featured four doors as standard equipment. By comparison, the Suburban didn’t get three doors until 1967, and waited all the way until its 1973 redesign to add a fourth (The Town Wagon, for its part, was dead after 1966, having spent its whole run as a two-door.).

Trouble was, the personal use pickup and SUV markets wouldn’t balloon to the size we see now until the late-1980s and early-1990s, but IH couldn’t wait. Declining sales and rising gas prices and regulatory hurdles prompted the company to end pickup and Travelall production at the end of 1975, while the Scout soldiered on through 1980, five years before the agricultural machine division was sold off and the remaining medium- and heavy-duty truck company was renamed Navistar International. Had there been huge demand for light trucks and SUVs prior to the sale, it might have never had to happen. 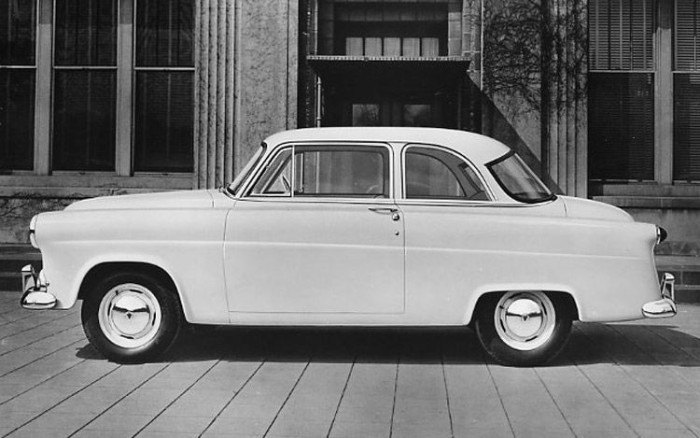 In the autumn of 1947, Hudson turned the U.S. automotive landscape upside down by introducing its all-new postwar models. The “Step Down” Hudsons, with their low, rakish roofs, smooth body sides and unibody construction were far ahead of anything else GM, Ford and Chrysler were cranking out at the time. Unfortunately, that same unibody construction limited the scope of the annual facelifts Hudson could make with its relatively meager financial wherewithal, while the big guys could easily afford to tool up completely new bodies and/or chassis every couple of years.

But instead of putting what capital and engineering resources it did have into a ground up redesign of the Hornet and other full-size models, Hudson management decided to back a new compact car program. The vehicle that resulted – the Jet – was a fine car…it just wasn’t one that American buyers wanted. Sure, they bought Nash Ramblers, but because that car had a three year head start on the Jet, the small percentage of buyers who were looking for a domestic compact gravitated toward it and not upstarts like the Jet or the Willys Aero.

Needless to say, the Jet debacle devastated Hudson, effectively forcing it to merge with, of all companies, Nash to create American Motors. Maybe if the Korean War had dragged on longer or if the economy had gone into a big slump the Jet would have made Hudson the belle of the car biz ball. Instead, it got stood up by fate.