The Top 20 Coolest Taxis in the World

Long before the advent of the internal combustion engine, someone came up with the idea of using a wheeled vehicle to carry people to where they wanted to go in exchange for money or some other form of payment. But if you ask us, it wasn’t until the dawn of the automobile and its first use as wheels-for-hire that the taxi truly came of age. Today, motorized cabs are pretty much a part of the scenery in every major city on earth.

Unfortunately, the vast majority of taxis are based on plain, unexciting vehicles possessing as much soul as a washing machine filled with soybeans. However, if you want your fare to buy some flair, there are some decidedly enticing options out there. Not convinced? Check out these 20 cool cabs and get back to us. 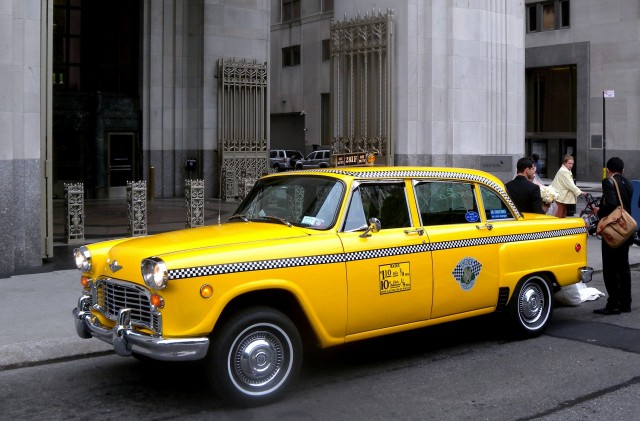 No conversation about taxis is complete without at least one mention of the venerable Checker Marathon. Despite its 1950s styling, the Kalamazoo, Michigan built Marathon was actually introduced in 1961, and remained largely unchanged (aside from the switch to Continental straight-six engines to Chevrolet sixes and V8s in 1965) until the last one was made in 1982! Despite this (or maybe because of it), the Marathon managed to become the archetypal American cab. 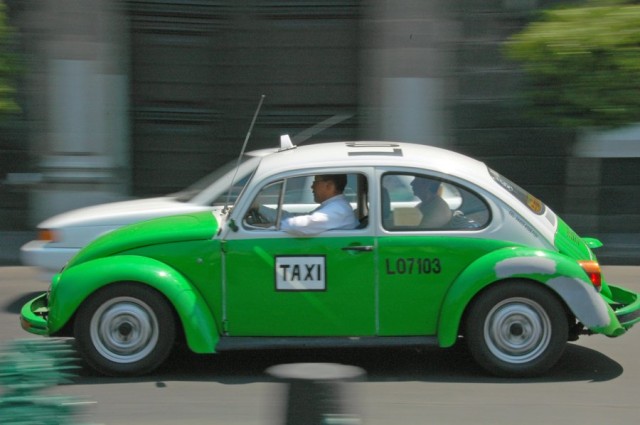 Considering its status as one of the most popular cars of all time, it’s no surprise VW’s first model has served as a taxi. And nowhere was it more prolific in serving as a taxi as it was in Mexico City. The city used to be crawling with green-and-white “Vochos”; now, just a handful are left, and all will be gone by January 1, 2013. Why? A new safety regulation requiring cabs to have four doors will go into effect then, and the Bugs will not be able to get their licenses renewed. No bueno. 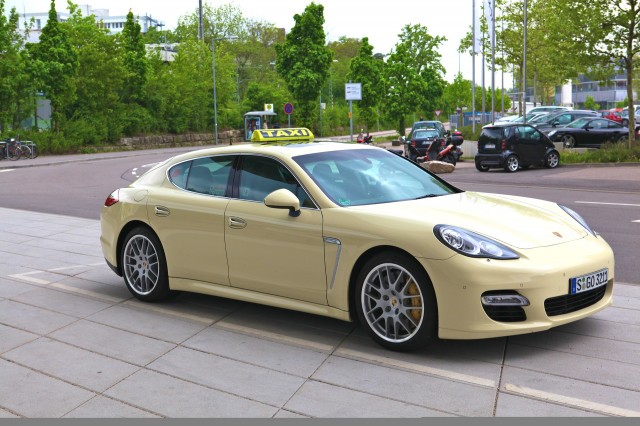 The Germans love their domestic auto industry, so much so that many of the Fatherland’s taxis are sedans (and wagons) from BMW, Audi, Volkswagen and Mercedes-Benz. And there’s at least one Porsche Panamera Turbo that’s donned the rooftop sign and beige paint. We aren’t sure how beneficial a booming twin-turbo V8 and AWD are in city traffic (or with a national speed limit for taxis of 75 mph), but the thought of a 500hp Porsche taxi does make us smile. 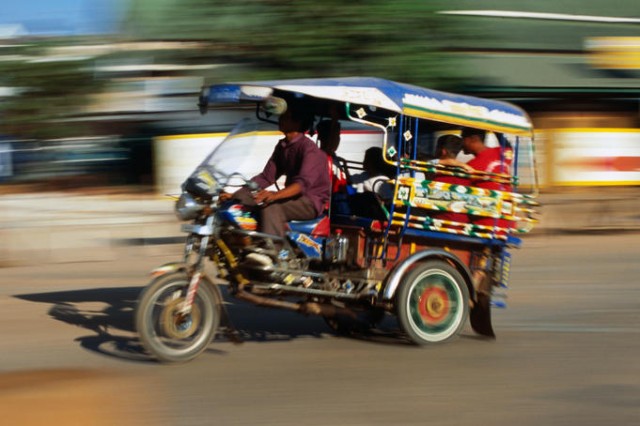 A staple of public transportation in Thailand, the tuk-tuk (derived from the sound these typically two-stroke-powered three wheelers make) is a vehicle that serves multiple roles. Not only does it carry passengers, but many tuk-tuks in Bangkok are used to deliver fresh produced to markets early in the morning. They aren’t the fastest, roomiest or most comfortable taxis on the planet, but we think they’re cool in the way they’re taxis that have been distilled down to their most basic elements: Wheels. Engine. Seats. Meter. 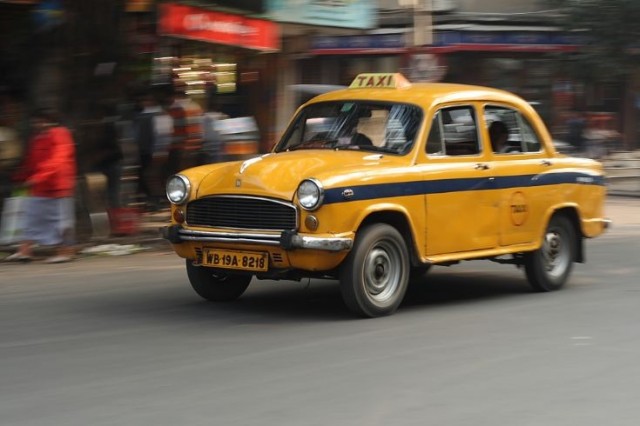 India’s Hindustan Motors began building Series III Morris Oxfords under the Ambassador nameplate in 1958, and hasn’t stopped since. And the Ambassador’s parts availability, durability, simplicity and practicality have made it a favorite among the Subcontinent’s cabbies almost since the first ones rolled out of the factory. 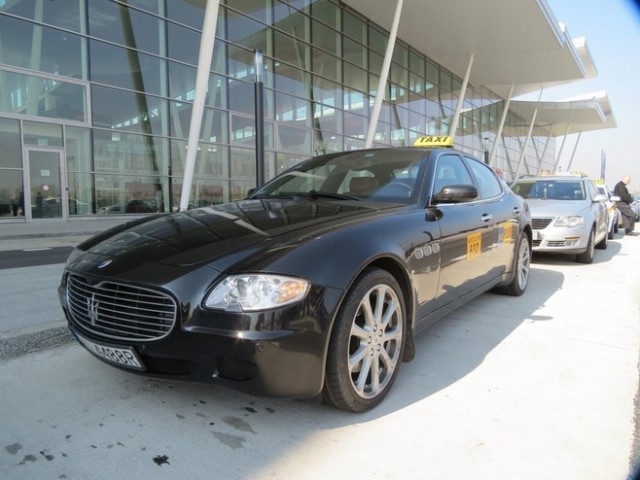 Maserati can hardly be considered a blue collar car brand, so imagine our surprise when we saw this late model Quattroporte serving as a taxi in Wroclaw, Poland. We like to think its driver lets his fares hear some of the 4.7L V8’s music as they watch the fourth largest city in Polska pass by their window. We know that’s what we would do. 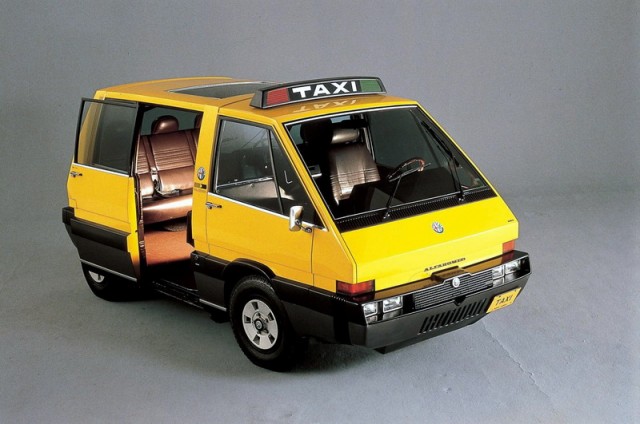 In the mid-1970s, there was a great deal of interest in reinventing the taxi into a stylish, space-efficient urban runabout. One of the companies that offered up a way to do this was Italdesign, the styling studio cofounded by Giorgetto Giugiaro. Using components and other assistance from Alfa Romeo, this boxy, min-minivan of sorts was drastically smaller than the typical New York City taxi of the era, and was also designed from the outset to be wheelchair compatible. Sadly, this stylish people mover never reached production, but more than a few of the ideas contained within it lived on in the first modern minivans of about a decade later. 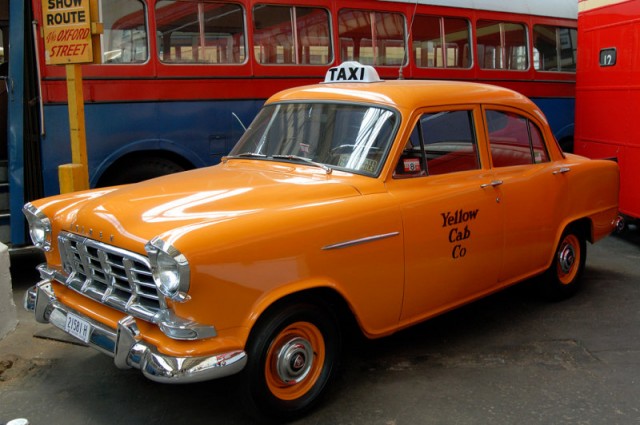 Many American visitors to Australia in the late 1950s probably did double takes when they passed the taxi stands at the airport. They would see what looked a lot like 1955 Chevrolet 4-door sedans, but smaller. In actuality, these were FC-series Holdens, so the family resemblance to the first of the Tri-Five Chevys was exactly that: Familial. Even today, 52 years after the last FCs were built, Aussies still wax poetic about these classic workhorses (unless they’re Ford fans, of course). 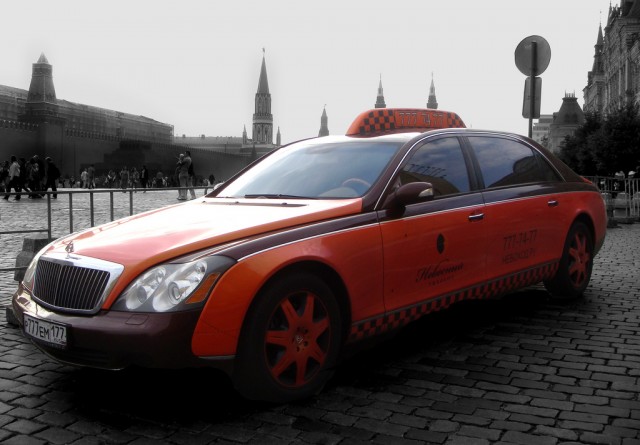 While Daimler AG’s (nee DaimlerChrysler’s, nee Daimler-Benz’s) revival of the Maybach brand was, by almost all metrics, an unmitigated flop, it did have one notable high point on its resume. A luxury taxi (Yes, there is such a thing) company in Moscow bought a Maybach 62 (the long wheelbase version) and pressed it into service for carting around wealthy residents of and visitors to Russia’s capital. As far as we can tell, that’s one claim Rolls-Royce and Bentley can’t make. 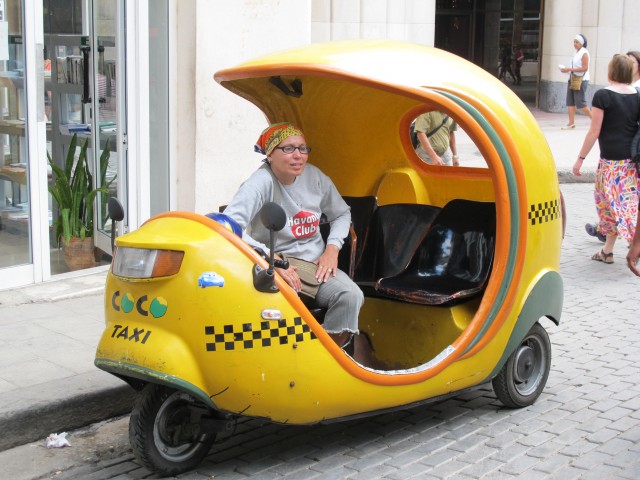 Motorized rickshaws can be found in many parts of the world. As already pointed out, Thailand has the tuk-tuk, but Cuba has the Coco Taxi. Looking like Pac Man as drawn by a motorcycle nut hopped up on hallucinogens, these little runabouts are amusing ways to get around the capital city of Havana. Not amusing enough to make us renounce our U.S. citizenship so we can go there and ride in one, mind you, but amusing nonetheless. 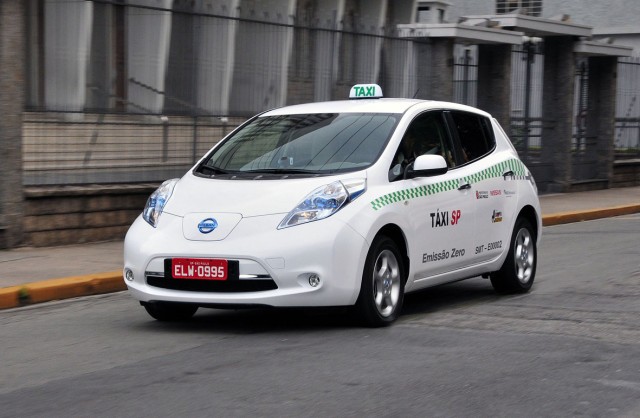 When it comes to puttering around an urban area, electric cars have many advantages: Less pollution (at least in the immediate area), less powertrain wear and tear due to fewer moving parts, and regenerative braking to turn kinetic energy back into electrical energy. These attributes (plus a desire to look environmentally conscious) are leading cab companies to adopt new generation electric cars like the Nissan Leaf for taxi duty. Yes, purchase prices and recharge times are significant bugaboos, but if one or both of those can be fixed, expect use of these quiet cars for hire to really take off in big cities. 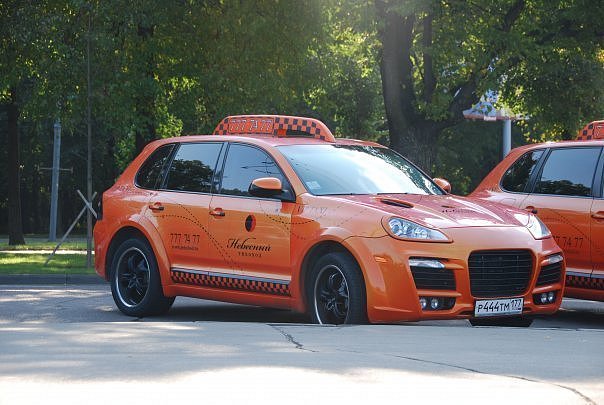 The Maybach 62 isn’t the only fancy taxi in Moscow. The same company operates a gaggle of these body-kitted Porsche Cayennes. It’s a little over-the-top if you ask us, but we assume when you’re shelling out oodles and oodles of rubles for a cab ride, you want people to notice you. 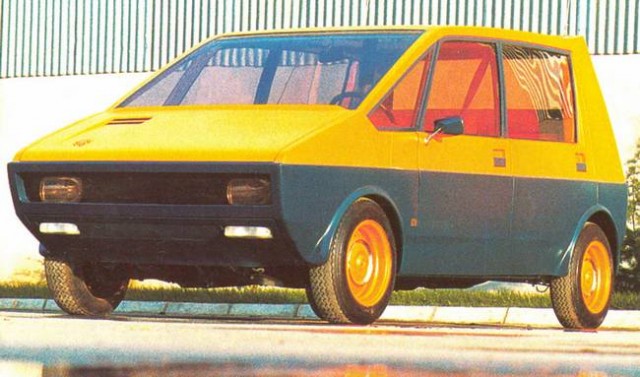 Italdesign’s Alfa Romeo taxi concept is cool, but French coachbuilder Heuliez and Peugeot came up with a similar “taxi of tomorrow” idea in 1972, four years before the Italian job. Based on the popular Peugeot 204, this wedge-o-riffic four-door minivan precursor probably would have become France’s go-to taxi had it been mass produced. Sadly, just the one prototype was built, and the proposed panel van and pickup variants never made it off the drawing board. Le sigh… 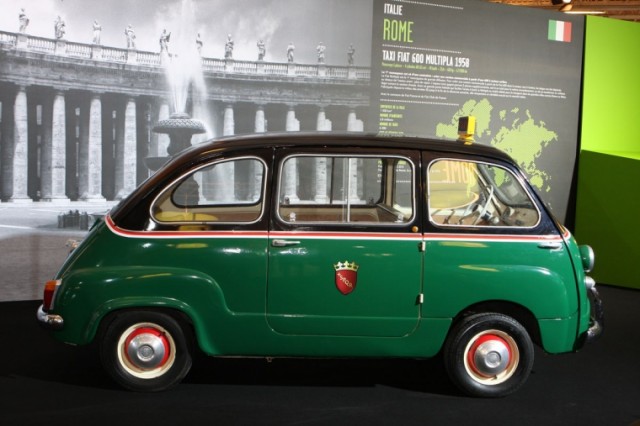 In case you think the idea of “minimum footprint, maximum space” in a taxi came about in the 1970s, meet the original Fiat Multipla, introduced in 1956. Based on the stupendously cute 600, the Multipla shoved the front seats forward and squeezed in another row of seats for a total of three. Think of it as a really mini minivan. The one pictured above served the city of Rome back in the day; no word if everyone who saw it said, “Awww!” 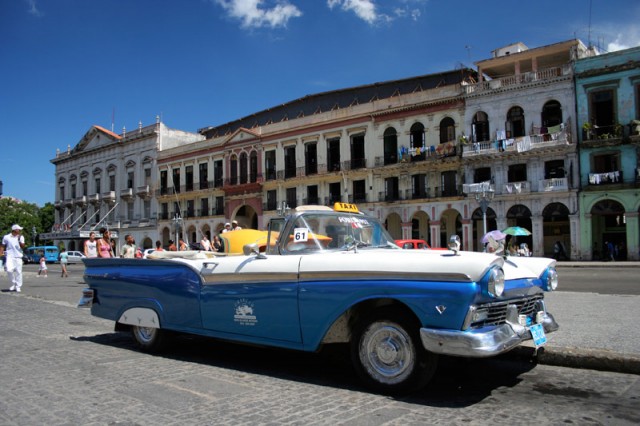 After the United States placed its still-extant trade embargo on Cuba in 1962, it became more-or-less impossible for Cubans to get their hands on replacement parts for their chrome drenched, tailfinned “Yank Tanks.” In spite of this, tens of thousands of these 1950s American classics remain on the island nation’s roads thanks to their owners’ creativity and resourcefulness. And as you’d expect, a sizable percentage of these oldies are serving as taxis, including the ’57 Ford Sunliner seen above. 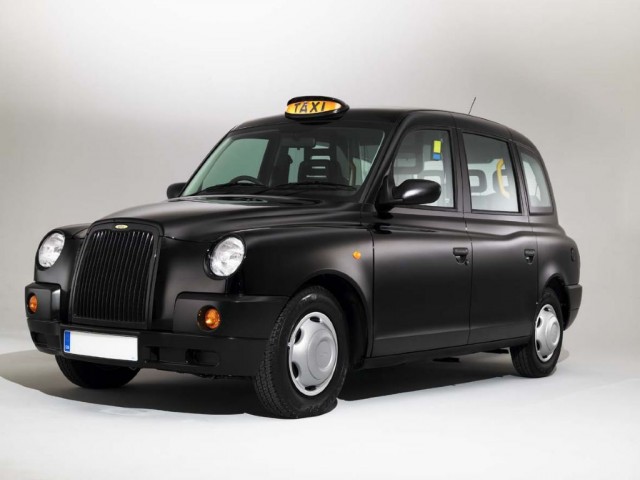 New York has its yellow cabs, but London has its black cabs. Unlike the taxis of New York (and most other major cities for that matter), the London Taxi (which is manufactured by London Taxi Company) retains a clear stylistic link to its predecessors, dating all the way back to the Austin FX3 of 1948. Together with the red double-decker bus, the black cab is one of London’s mobile tourist attractions. And the throwback styling makes it undeniably cool. 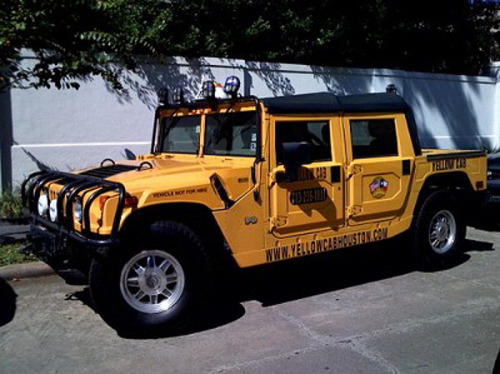 Most taxis are found in urban areas. So why base a taxi on a Hummer H1, aka the baddest 4×4 of all? Probably because it looks macho and isn’t your garden variety Crown Victoriaor Sienna. However, it probably helps deter fare-skippers, too.

Although the Checker Marathon and multiple products of the Big Three had a lock on the NYC taxi market in the mid-1970s, Peugeot of all companies was represented in the Big Apple with its 504 Diesel. These sparkless French sedans provided cab companies a fuel efficient alternative to the thirstier (though admittedly roomier) homegrown machines. 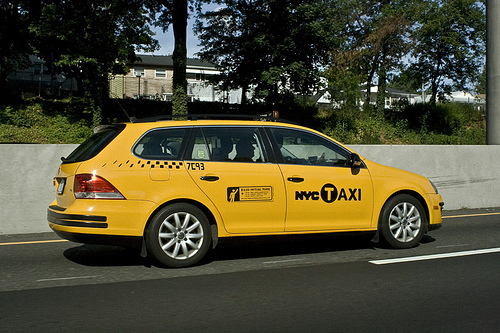 Fast forward to today, and another European bred diesel has also taken a chunk of the New York market. The Volkswagen Jetta TDI isn’t the most common taxi on Manhattan, and the Jetta Sportwagen TDI is even less common. But the Jetta Sportwagen TDI – a small, nimble, efficient station wagon – checks all the boxes on our list of stuff required for a cool everyday car. 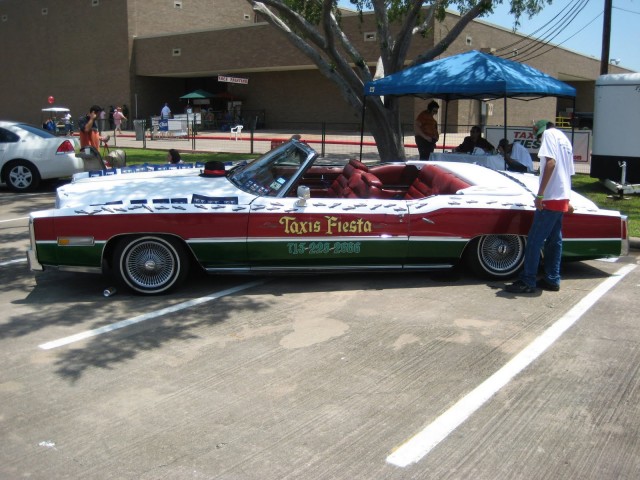 No, Cadillac’s front-wheel-drive personal luxury car of the ‘70s has never been a popular platform for a taxi. Blame the high cost, lack of rear doors and less-than-stellar gas mileage. But those shortcomings don’t seem to have stopped Houston, Texas based Taxis Fiesta. Now we realize that it’s unlikely the company uses this Eldorado for anything other than promotional purposes, but we want to believe.